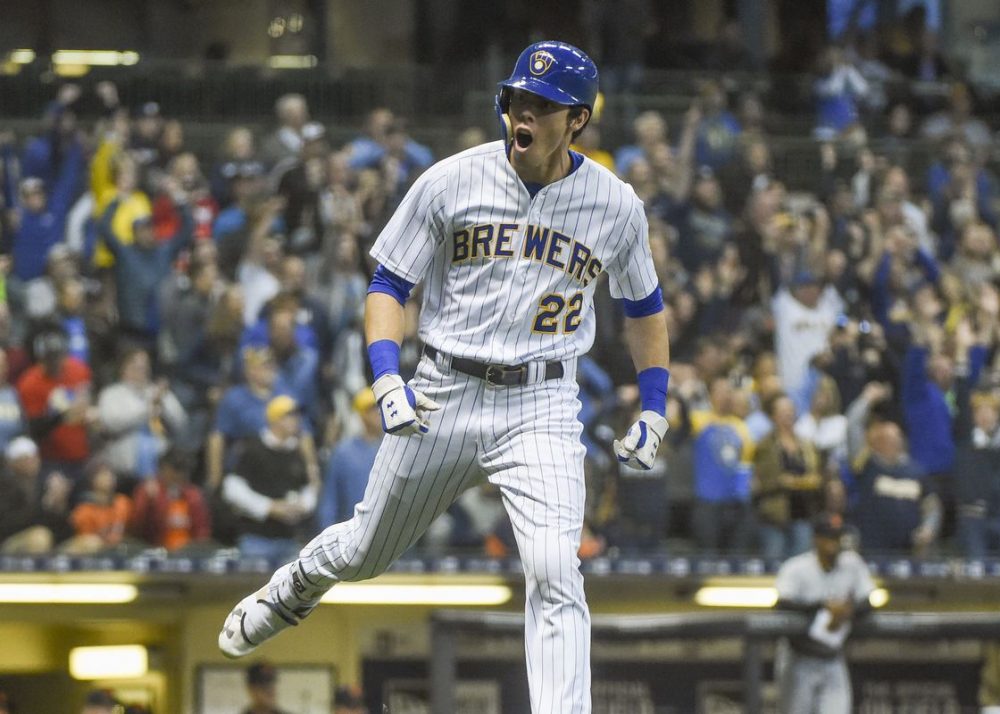 Having each dispensed with their common enemy from Chicago, the Rockies and Brewers now turn toward each other in the ring, like when the dust clears near the end of a Royal Rumble, ready to begin their own best-of-five battle for a spot in the NLCS.

Milwaukee won an NL-high 96 games this season, including a league-best 51-30 record at home. Last time Miller Park hosted a playoff game, the Brewers had Corey Hart in the leadoff spot, Prince Fielder hitting cleanup, and Shaun Marcum on the mound. (It did not go well.) Colorado has built a reputation for being weak on the road, but this season the Rockies had the league’s fifth-best road record at 44-38 and … well, ask a Cubs fan what they think about that whole “the Rockies struggle away from Coors Field” thing.

This should be a very fun series, featuring a lot of very good players the national audience hasn’t gotten to know fully yet.

Shown above is the Rockies’ standard lineup versus righties; Matt Holliday replaces Gonzalez against lefties, with some batting order juggling. Arenado remains the superstar around which the lineup revolves, and Story joined him in having an MVP-caliber season after a very rough 2017. Blackmon saw his OPS drop 140 points compared to last season, and he hit just .249/.329/.439 away from Coors Field, which made Dahl‘s late-season emergence (and health) so key for a lineup that otherwise lacks much in the way of thump among the supporting cast.

This was not a good offense during the regular season, although as always calling Coors Field home for 81 games inflated the raw numbers enough to mask that fact. Colorado posted the lowest batting average (.256) and second-lowest on-base percentage (.322) in team history, and their .665 OPS on the road ranked 27th in MLB ahead of only the Orioles, Tigers, and Giants. They scored just four runs in 22 total innings between Game 163 and the Wild Card game, and scored more than four runs in just two of seven regular-season matchups with the Brewers.

It can be very difficult to convince people that the Rockies having a poor lineup is even possible, since they will rank among the top three in scoring basically every year thanks to playing at altitude. However, their road numbers were particularly bad this season, their home numbers were below the usual jaw-dropping standard, and BP’s context-neutral measure of offense, True Average, pegged the Rockies as the 20th-best offense in MLB. That can change in a hurry this month, of course, but if the Rockies win this series by out-slugging the Brewers it should absolutely be seen as a surprise.

Now this is a powerful lineup. Milwaukee hit the second-most dingers (218) in the league and, after adding Moustakas to the mix in July, posted the league’s third-highest OPS in the second half. They were the only NL team with three 30-homer hitters (Yelich, Aguilar, Shaw) and Moustakas also went deep 28 times overall in 2018. Focusing strictly on road numbers is unfair to the Rockies because there’s some evidence that their hitters suffer from a post-altitude hangover effect, but this still seems noteworthy: Milwaukee hit .257 with a .741 OPS on the road, compared to .225 with a .665 OPS by Colorado. And the Brewers were a top-five NL offense at home as well. True Average pegs the Brewers as the fourth-best lineup in baseball.

Holliday’s comeback is pretty incredible, and with plenty of lefties on Milwaukee’s pitching staff there will be ample opportunity for the 38-year-old to add to the great story. I normally wouldn’t mention a backup catcher, let alone a third-string catcher, but Wolters was the Wild Card game hero and, as we saw earlier in that same game, Bud Black is very capable of managing his way into several Butera plate appearances.

Milwaukee’s depth and power doesn’t end with the usual starting lineup, as David Stearns and company went out of their way to add veteran bats at the trade deadline even when there weren’t obvious places for all of them to play. Midseason pickups Granderson and Schoop, combined with Santana and Broxton, give the Brewers left-handed and right-handed “one swing can change this game” options to pinch-hit for pitchers (and catchers).

The flip side to the Rockies’ lineup forever being overrated is that their rotation has not gotten nearly enough credit. Freeland emerged as one of the best starters in baseball this season, somehow cracking the code of how to pitch at Coors Field with a 3.04 ERA in 34 career games there. Marquez also had a breakout year, and that young 1-2 punch figures to take the mound when the series heads to Colorado for Games 3 and 4. Senzatela and Anderson are no slouches either, although in this case they’re quality mid-rotation arms asked to begin a series because Marquez and Freeland were needed just to get here. It’s remarkable that the Rockies’ rotation is this good—and features this many young standouts—even with Jon Gray pitching himself out of the picture.

(I have no idea how to accurately represent Milwaukee’s “starting” rotation plans, so what you see listed above was my idea of a compromise.)

Brewers starters threw the second-fewest innings in the league during the second half, as injuries took a toll and manager Craig Counsell responded by leaning more and more heavily on the bullpen. He’ll go with The Opener strategy in Game 1, with Woodruff getting the nod, and has said Chacin is slated for Game 2 on short rest, which likely means an abbreviated start from him as well. After that … who knows. Regardless of who takes the mound first for Milwaukee, don’t expect to see them face the Rockies’ lineup for a third time very often, or maybe at all. Milwaukee is at a starting pitching disadvantage, but neither Freeland or Marquez being available to start twice in this series lessens that and the Brewers are planning to make every game a bullpen game anyway.

Colorado spent more than $100 million on bullpen signings this offseason, but Bryan Shaw and Jake McGee may not contribute anything in the playoffs. Davis will, obviously, and he was the biggest-ticket signing. Ottavino’s emergence and the smart midseason pickup of Oh gives the Rockies plenty of right-handed firepower late in games, but Black’s options from the left side aren’t as appealing and that could loom large against Yelich, Moustakas, and Shaw.

This is where the Brewers have the biggest on-paper advantage, made even bigger by their plans to maximize the bullpen at every opportunity. Hader has been nearly unhittable for much of the season, although he did look somewhat human down the stretch. Jeffress may get the least attention ever for a pitcher with a sub-2.00 ERA and double-digit strikeout rate, and Knebel has shown signs lately of being the dominant force he was last season. Soria, yet another of Stearns’ midseason adds, remains a closer-caliber right-hander. Even rookies Burnes and Woodruff have looked good enough to potentially trust in key spots. It’s an embarrassment of riches, and Counsell will do everything he can to get the game to the bullpen before a starter can take on much damage.

Much was made of the Brewers “punting” defense with their midseason moves to add big bats, and certainly playing Shaw at second base and Schoop at shortstop were outside-the-box ideas. However, the Brewers ranked fourth among MLB teams at turning balls in play into outs, overall and in the second half, thanks largely to their incredibly aggressive shifting. As both Stearns and Counsell noted at the time of the trades, if the team is rarely using traditional defensive positioning then traditional defensive labels no longer apply as much. In other words, does it really matter if we call Shaw a “second baseman” or a “third baseman” if he’s spending most of his time near second base either way?

As we’ve seen already this week, Colorado’s defense can be an adventure, particularly in the outfield. Colorado ranked 22nd at converting balls in play into outs this season, although certainly Coors Field can make evaluating defense trickier than usual on a team and individual level. Blackmon rates horrible by BP’s metrics, ranking as the worst defensive outfielder in baseball at -21 runs in center field. Arenado is great at third base, via the metrics and any functioning pair of eyes, and FRAA also thinks LeMahieu and Wolters are top-notch defenders at their positions.

Milwaukee has homefield advantage, a superior lineup built around the likely MVP, and one of the best, deepest bullpens in baseball, which makes picking against the Brewers seem like a stretch. Colorado does have vastly superior starting pitching, but for that to swing the series would require the Rockies’ young starters to thrive and the Brewers’ bullpen-heavy plan to backfire. I think Counsell has the horses to make it work, particularly with a pair of scheduled off days allowing the bullpen to reset every two games. Brewers in five.