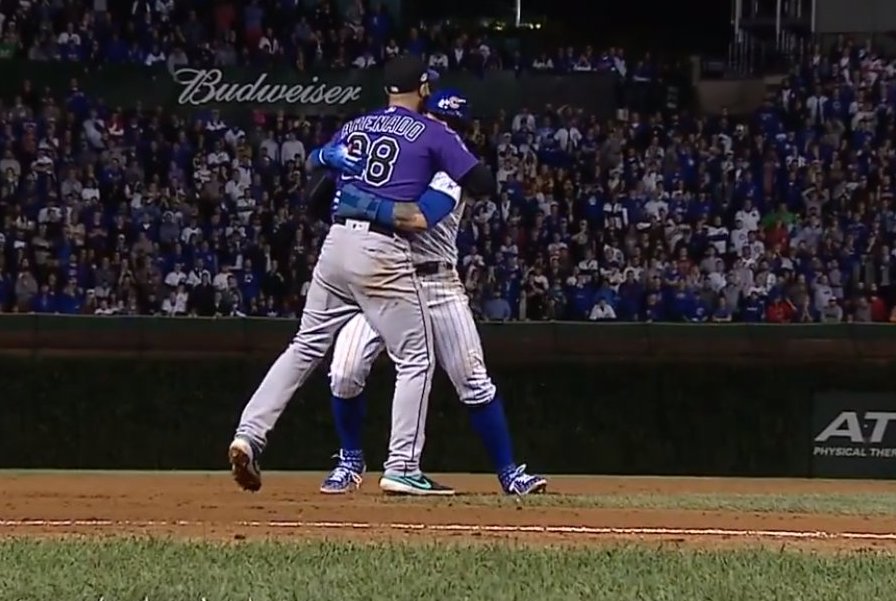 While it seems that they’ve been going on forever, this is only the seventh season featuring Wild Card games. The Wild Card itself was introduced after the 1993 season (though not actually played until 1995, due to the 1994 strike), but the addition of a second Wild Card, with a single game to determine who advances to the Division Series, goes back only to 2012. The Wild Card game goes back only as far as President Obama’s election. The second time.

We haven’t yet figured out what the Wild Card game is, exactly. Playoff or play-in? Skills contest or coin flip? Postseason or pre-postseason? The Rockies-Dodgers and Cubs-Brewers games Monday counted toward the regular season. The Rockies-Cubs game last night didn’t. But does that mean the Cubs’ players and fans can look back fondly on 2018, the year they made the postseason for the fourth straight time for the first time in franchise history? Or for them, is this a season like the Rangers’ 2013, when they played a 163rd game and went home?

And the fact is, most Wild Card games haven’t been very exciting. Win Probability Added (WPA) measures the drama of each play-in a game by taking a team’s probability of winning (given inning, outs, runners on base, and differential in score) before and after every play. The greatest WPA in Wild Card game history was in 2014, when Salvador Perez singled in the last of the 12th with Christian Colon on second base, two outs, and the game tied 8-8. The Royals’ chance of winning the game was 61 percent percent after Colon stole second on the fourth pitch of Perez’s at-bat. It was 100 percent after Perez singled. The WPA increased 39 percent. That’s really exciting.

But that was the pinnacle. Among the 12 Wild Card games, there had been only two—the aforementioned Royals-A’s game in 2014 and the Giants-Mets game in 2016 (Conor Gillaspie’s three-run homer off Jeurys Familia to break a 0-0 tie in the ninth inning)—that have featured a play that swung the win probability by more than 30 percent. There had been only 24 plays—an average of two per game—that moved the win expectancy by even half that amount. And that’s misleading, since seven of them came in the wild 2014 Royals-A’s game, and six in the 2016 Blue Jays-Orioles game, also known as When Britton Didn’t Pitch.

Take away those two, and you have 10 games with a total of 11 plays that moved the win expectancy needle by 15 percent. That is not compelling baseball. I mean, there were four plays that met that level in last Friday’s Tigers-Brewers game. It’s not that high of a bar. So while we have not figured out exactly what a Wild Card game is, we have figured out is that they’re generally pretty unexciting.

And then we got last night’s game. (All win expectancy figures from FanGraphs.)

Bottom of the sixth inning: Rockies leading 1-0, Cubs runners on first and second with one out. Anthony Rizzo grounds into a double play. Cubs win probability drops by 15.4 percent.

Jon Lester added to his postseason resumé by allowing four hits and a walk while striking out nine over six innings. Unfortunately, two of those baserunners were the first two batters he faced, as Charlie Blackmon walked and DJ LeMahieu doubled him to third base. A Nolan Arenado fly ball scored the game’s first run. That put them into a 1-0 hole from which Kyle Freeland—four hits, one walk, six strikeouts over 6 2/3 innings—didn’t let them emerge. When Kris Bryant batted, it was with Ian Happ, the Cubs’ first baserunner of the night to have advanced that far, on second base. He stayed there, pushing the Cubs’ win expectancy down to 31 percent.

Similar to Bryant an inning earlier, Heyward, pinch-hitting for Jesse Chavez, was the first Cubs hitter to bat with a runner on third base. And similar to Bryant, he was unable to do anything, striking out on five pitches. The Cubs’ win expectancy tumbled to 26 percent.

The third time was a charm for Chicago, which had failed in high-leverage situations the prior two innings. With two outs, Anthony Rizzo walked, and pinch-runner extraordinaire Terrance Gore (career stats: 19 plate appearances, one hit, one walk, 16 runs, 27 stolen bases) stole second. Baez’s double tied the game, increasing the Cubs’ win expectancy from 27 percent to 58 percent. It was the first time since the game’s first batter that the Cubs’ win expectancy pushed past 50 percent.

With one out, Nolan Arenado singled. Following a Trevor Story pop-up, Gerardo Parra worked an eight-pitch walk. Ian Desmond reached base when Bryant couldn’t flip his slow roller towards third in time for a force at second. But Dahl’s grounder knocked the Rockies’ win probability down from 53 to 36 percent.

You could tell it was extra innings in a postseason game because the Cubs had a starting pitcher, Kyle Hendricks, on the mound. With two outs, he allowed consecutive singles to Story and Desmond. You could tell it was extra innings in postseason game because that brought the Rockies’ third catcher of the game, who’d come in via the team’s fourth double-switch of the evening, to the plate. Wolters—the team’s worst hitter with over 200 plate appearances—singled up the middle to give the Rockies the lead and an 83 percent win expectancy.

The drama in extra innings moved the excellence of Lester and Freeland into the background. Forgotten, too, are Chicago’s Tommy La Stella reaching first base on a catcher’s interference that knocked Rockies catcher Drew Butera’s glove off his hand, as well as LeMahieu’s double getting lost in the ivy … 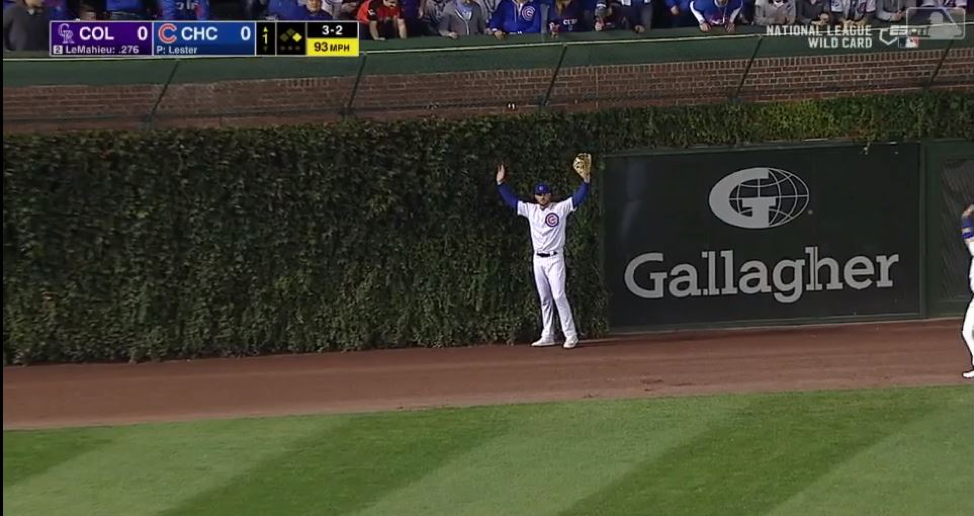 … Baez hugging Arenado after being tagged out, maybe to prevent a collision, maybe to block Arenado from completing a double play … 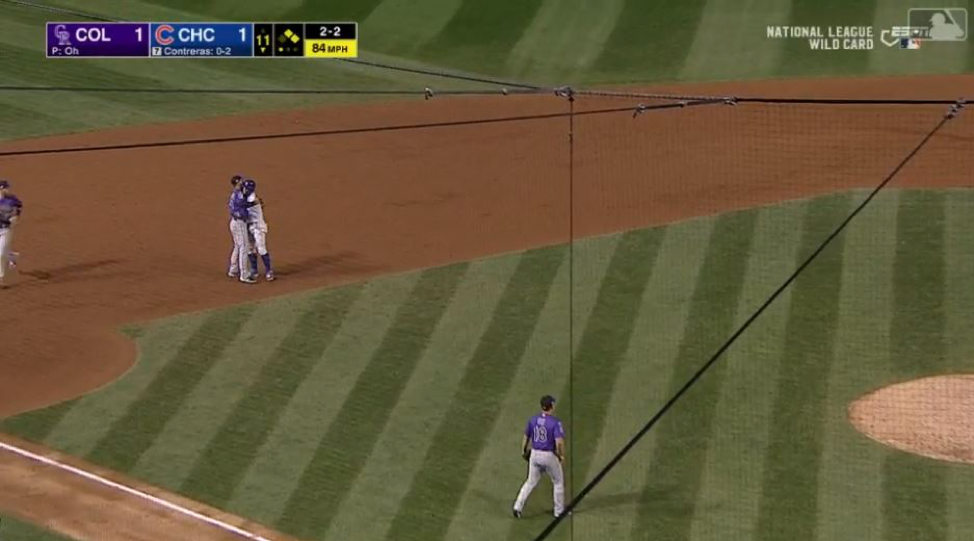 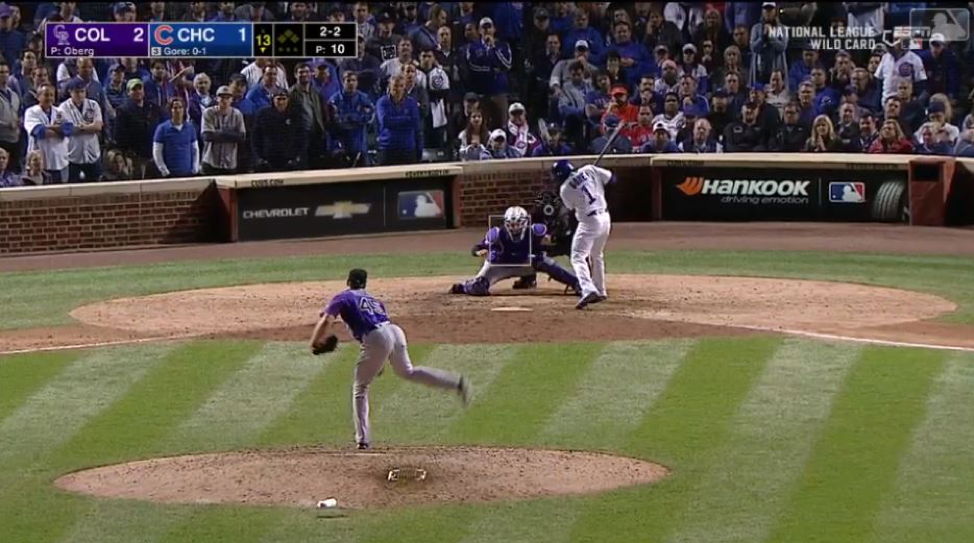 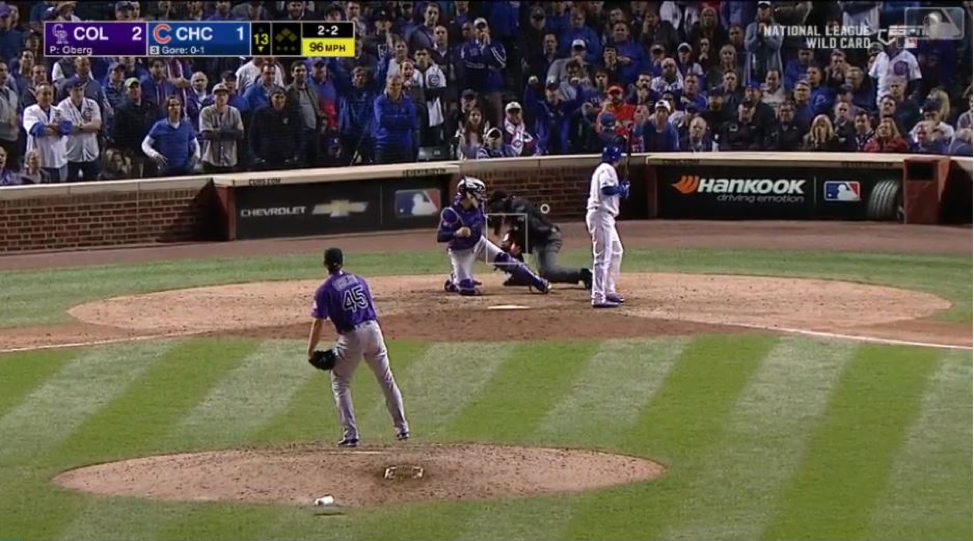 But in return, we got something lacking in most Wild Card games. Excitement.

You need to be logged in to comment. Login or Subscribe
Robert Hacking
I'm a fine of a lot of new stats, but judging a game based on swings in win probability is, well, let's just say dumb. The Orioles/Jays game was tense and exciting.
Reply to Robert
Rob Mains
That's what I said, Robert. The three most exciting games, by this method, were the O's/Jays game you mentioned, that crazy '14 ALWC, and last night's.
Reply to Rob
deadheadbrewer
For me, the game could have been much more interesting had they found a way to complete it in less than 4:55. Similar to that crazy-long WS game last year, at some point, the tension is lost for me, simply by the length of time I have to commit to the event. Your comment, Mr. Hacking, is a bit rude for this site . . .
Reply to deadheadbrewer
Rob Mains
Deadheadbrewer, as the guy who was assigned to cover both last night's game AND that nutso Game 5 last year, I see your point. But I'll tell you, the excitement stayed there for me. Especially that Series game! It was so crazy! On the other hand, I used to have a job that required me to get up between 2 and 3 AM for work, and not getting to bed until 2 or 3 AM while working on the game recaps is a bit much.
Reply to Rob
Matthew Gold
Thanks for the report. I think that you meant to say, regarding the last play of the top of the 11th inning, that it raised the Cubs' win probability up from 47 to 64 percent.
Reply to Matthew
Rob Mains
Damn, Matthew, I picked the wrong day to be away from my computer until most of the day...You are, of course, right. Thanks for catching that. Fixed.
Reply to Rob