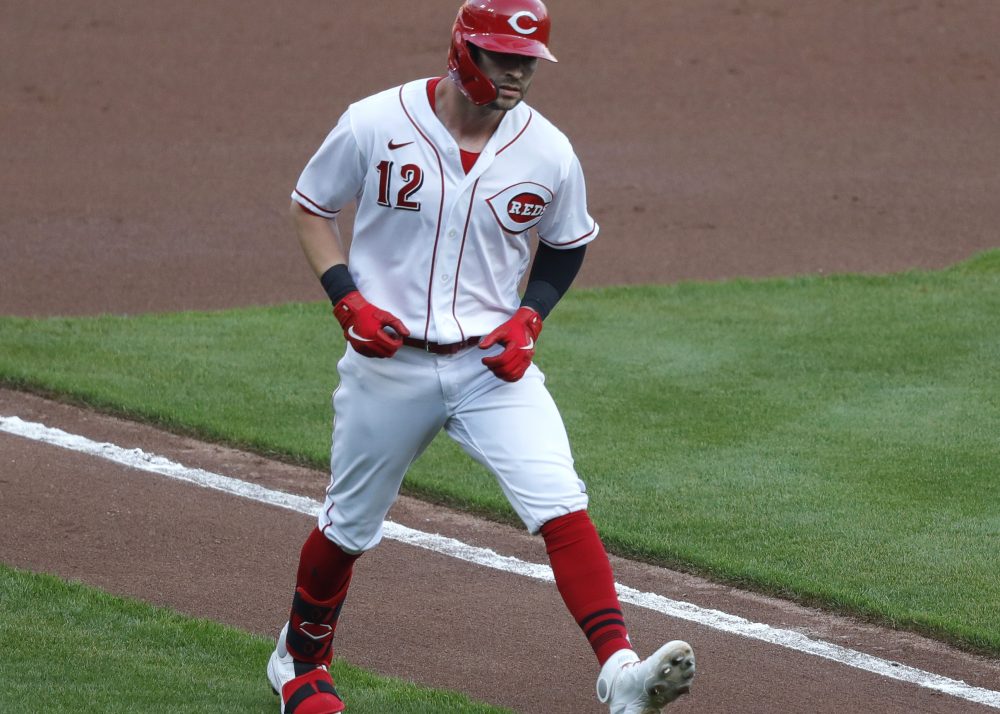 Welcome back to the FAAB Review, the column that examines what been going on in multiple analyst leagues. The hope is that we can help you with your own FAAB bidding process and habits. We’re changing things up a little this year and will mostly focus on The Great Fantasy Baseball Invitational (TGFBI), a contest that contains 28 leagues of 15 teams each and crowns an overall champion. We’ll look at the 10 most popular FAAB buys in those leagues every week. We’ll also mention some of the highlights from Tout Wars AL and LABR NL, two deeper leagues in which I also compete, along with the Tout Mixed Draft league, in which Tim McCullough participates.

Tyler Naquin: $108 ($337, $7)
On Sunday, Naquin finally cooled off, going 0-for-4 with two strikeouts against the Diamondbacks. In the four games before that, he sizzled. He went 7-for-17 and included four home runs, nine RBI, and a ludicrous .412/.474/1.176 slash line. Everyone’s educated guess is that Naquin will cool quickly and find himself back on the bench, which is logical, but he’s been a capable hitter in the recent past (2019) and a particularly good one in the distant past (2016) in about half a season of plate appearances each time. He won’t keep up this level of performance (duh), but a seasonal pace of 20-25 home runs with a solid batting average isn’t out of the question. The challenge will come in finding enough playing time when the rest of the Reds outfield is healthy.

Akil Baddoo: $107 ($253, $15)
When it comes to redraft leagues and FAAB bidding, opportunity trumps talent nearly every time. In Baddoo’s case, it’s possible that we have the intersection of both elements. Baddoo was a Rule 5 selection by the Tigers from the Twins this past winter. He fell off most prospect lists after a poor campaign at High-A Fort Myers in 2019, but thus far in 2021, he has shown flashes of why minor-league watchers were so excited about him. Baddoo has worked his way into the strong side of an outfield platoon in Detroit, and while I’m not sold on the power (as I wrote this he just tattooed a Zack Greinke offering out of the park), he could be a source of 15-20 steals at a minimum if he sticks. He’s not regarded as a top prospect, but the lost 2020 for the minor leagues is going to lead to an even higher margin of error in judging rookies than usual.

Steven Matz: $92 ($175, $17)
After a disastrous 2020 and an offseason salary dump of Matz’s contract by the Mets to the Blue Jays, everyone wrote him off as a fantasy no-no. But he’s been terrific in his first two starts, posting two wins with a 1.46 ERA and 13 strikeouts in 12 1/3 innings. Matz made some adjustments heading into the 2020 season that not only didn’t work but also led to a disastrous 9.68 ERA with the Amazins. It’s possible that a full spring training was just the ticket for Matz to translate those 2020 adjustments into on-the-field success, and that he’ll be a reliable SP3 this season. It’s also possible that we’re looking at a two-start small-sample fluke, and that Matz will have a tougher time when he’s facing AL East lineups and not the Rangers and Angels. This average bid is about what you’ll have to pay to find out, and while I wouldn’t start him this week at the Royals in standard mixed, now is the time to add him if you want to take this ride.

Lou Trivino: $83 ($212, $27)
On Friday, Athletics manager Bob Melvin indicated that Trivino is the most likely candidate to log saves while Trevor Rosenthal is out of commission. Oakland has no saves thus far, but now that they no longer will face the Astros and Dodgers in perpetuity, I assume that there will be some opportunities. Jake Diekman seemed to be the logical favorite, but I’ll go with what the manager says over my feelings about who should or shouldn’t be closer. Trivino is a reasonable add, particularly if you lost Rosenthal.

Corey Knebel: $75 ($225, $13)
On Friday, Knebel picked up his second save of the season in dominant fashion, striking out the side against the Nationals. It was a COVID-depleted Nationals team and he struck out Starlin Castro, Andrew Stevenson and Hernán Pérez, but a save is a save. On Sunday, Kenley Jansen picked up his second save of the season, striking out two against the same depleted Nationals squad. Knebel’s velocity is up two-plus ticks from where it was in 2020, and Jansen isn’t quite the pitcher he was at his dominant peak. Still, I suspect Jansen is still the closer with Knebel getting more opportunities than your typical set-up reliever might. Knebel is great in deeper leagues where elite relievers are better than back-end starters, but for saves speculation alone, there are better plays to make.

Johnny Cueto: $41 ($169, $3)
Cueto looked terrific on Friday in his second start of 2021, mowing down the Rockies for eight innings before finally allowing a run in the ninth and giving way to Jake McGee after 118 pitches. This still feels more like NL-only territory and an opportunity to take a ride with Cueto on what could be his Farewell Tour, but Cueto showed us that when everything’s working, he plays like a low-rent version of Zack Greinke. Velocity matters, but it isn’t the be all and end all.

Jed Lowrie: $26 ($89, $1)
Lowrie was written off by many prior to the season as a soon-to-be 37-year-old, injury-prone player who missed nearly the entirety of two seasons with a knee fat pad impingement. Lowrie has alleged that the Mets refused to permit him to get an operation that he wanted, which would have allowed him to play in 2019-2020. He ultimately got the surgery in October and thus far looks like the capable hitter he was during his last stint in Oakland in 2016-2018. It’s still a low-end fantasy package outside of anything but AL-only, but a .270 AVG with 15-20 homer power plays nicely on the back end of 15-team mixers at middle infield.

Wade Miley: $23 ($65, $4)
I have constantly warned against putting too much stock into small sample 2020 stat lines, but I suspect that’s what I did with Miley heading into the season. His 2020 was undeniably bad, but his combined line in 2018-2019 was a 3.52 ERA and a 1.30 WHIP in 248 innings. That’ll work. I don’t want to oversell Miley, as his career DRA of 5.13 and low strikeout rate make him more of a fifth or sixth starter in 15-team mixed. But he’s streamable in most formats this week, with two starts on tap at the Giants and against Cleveland.

Kevin Ginkel: $23 ($50, $1)
Last week, Chris Devenski was the Diamondbacks closer of the moment, but he was placed on the team’s restricted list due to an undisclosed personal issue. Devenski’s save on April 4 is the only opportunity that the team has had thus far, so we’re mostly guessing with Ginkel based on potential. Stefan Crichton could also close in Arizona, and the team hasn’t given any kind of indication of which way they’re leaning.

Aaron Sanchez: $22 ($65, $3)
Sanchez is back. He sat out all of 2020 after undergoing right shoulder surgery in 2019. When it comes to pitchers, shoulder injuries make me more nervous than elbow injuries, and while Sanchez’s results in his 2021 debut were good, his fastball velocity was down three mph from where it was in 2019. He did rely on his curve more and created similar separation between the heater and the curve, but I’m still not buying until I see at least one or two more solid outings. He has a two-start week against the Reds and at Marlins and is borderline in 15-team mixed. I would only play him in NL-only for now.

Phillip Evans: $15 ($35, $1)
Even factoring in Evans’ terrible 2018, the Pirates third baseman has a career .314/.394/.455 slash line in 137 career plate appearances. With Ke’Bryan Hayes on the IL with a sore wrist, Evans has made the most of his short-term opportunity to start, with three home runs in his first 31 plate appearances. Hayes’ injury doesn’t sound serious, but the Pirates aren’t exactly loaded with talent. It’s not difficult to see Evans landing in a super-utility role and getting a decent amount of playing time even after Hayes returns.

This was our first FAAB period in Tout after a full week of baseball, but it was still relatively quiet, with 17 winning bids compared to 13 last week. I did nothing. I considered bidding about what Larry Schechter of Winning Fantasy Baseball did for Tejeda, but stood pat. I like Tejeda’s speed, but I am not convinced that he’s going to stick or hit enough to make a big difference. Plus, I’m already overly exposed to the bad Rangers lineup with Joey Gallo and Leody Taveras (sigh).

The low-end bids on quality relievers show why even in an AL-only you don’t need to push very much on closers-in-waiting. Whitlock and Sawamura could both see save opportunities in Boston at some point.

I stood pat in LABR, as well. Ruf was the player I was eyeing here as an Albert Almora replacement. I would have bid $1 and lost the tiebreaker. He’s off to a great start but won’t play much against righties.

Floro is one of six relievers who Marlins manager Don Mattingly mentioned as a possibility for the Marlins next save chance. I wish I were kidding.

Ynoa started last night for Atlanta. He has a mid-90s fastball that he can dial up close to 100 and generates plenty of ground-ball contact. He looked great and could be a mainstay in the Atlanta rotation. I feel a little sorry that I didn’t bid.

You need to be logged in to comment. Login or Subscribe
wolverine
In seasons past this very helpful and informative article would appear on Monday mornings, which was great, because then I could read it before making my own FAAB bids. Having it come out now on late Tuesday night isn't very helpful at all. It's still an interesting read, but more as a post mortem than an informative guide. Is there any way you can go back to publishing this on Monday morning? The difference in its value is considerable.
Reply to wolverine