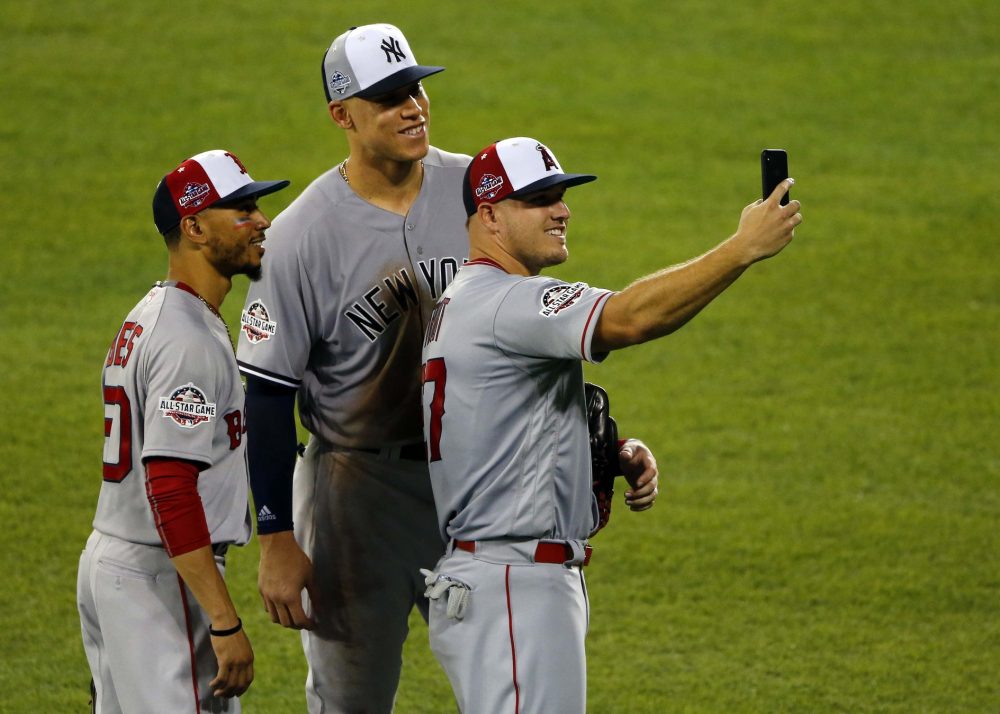 Below you’ll find PECOTA’s best-projected position players of the next 10 years. In other words, if you were starting a team from scratch right now, without any salary or service-time considerations, who would PECOTA advise you to pick first? Here they are, counting down from no. 15 to no. 1.

Three-fourths of the Astros’ starting infield earns a spot among the 15 most-valuable players of the next decade. Altuve is the oldest of the trio at 29 and he’s under team control through 2024 thanks to a $163.5 million extension signed last spring. PECOTA projects him for 4.5 WARP this season, which would split the difference between last year (3.3) and his MVP-winning 2017 (5.6). Despite the conventional wisdom that second basemen age poorly and the lack of similarly pint-sized great-hitting comps throughout history, the system sees Altuve remaining an above-average regular into his late 30s.

Yelich was a very good all-around player for the Marlins, but he took things to another level following last offseason’s trade by cutting his ground-ball rate and becoming more pull-happy in search of untapped power. It worked, as his 36 homers easily topped his previous high of 21, his NL-leading .598 slugging percentage was 105 points better than his old best, and he carried Milwaukee to the playoffs on his way to a near-unanimous MVP. Predicting another MVP is a bit too far for PECOTA given his pre-2018 track record, but Yelich’s projection establishes him as a superstar in the system’s eyes.

PECOTA is only built to project 10 years into the future, at which point Harper will still have another three years to go on his $330 million deal with the Phillies. However, if he performs as projected, racking up 36.4 WARP over the next 10 seasons, anything Harper produces in years 11-13 will be gravy. On a related note: Manny Machado, this offseason’s other superstar free agent, is projected for 31.4 WARP over the next 10 seasons to rank 26th on this list. San Diego would be similarly happy with that production—and Machado’s projected aging curve—during his 10-year, $300 million deal.

Goldschmidt is the only player on this list older than 29. He’s averaged 5.0 WARP per 150 games for his career, including at least 3.6 WARP in each of the past six seasons. An impending free agent traded in December, the 31-year-old six-time All-Star signed a five-year, $130 million extension before playing a regular-season game for the Cardinals. Right-handed-hitting, right-handed-throwing college first basemen have a poor developmental success rate, which is why prospects like Pete Alonso are often met with skepticism, but Goldschmidt is that player type’s best-case scenario.

Correa saw his OPS drop more than 200 points in an injury-riddled 2018 season, missing 50-plus games for the second straight year, but PECOTA still sees an amazing 24-year-old player. Correa projects as MLB’s third-best shortstop for 2019 and second-best shortstop over the next decade, trailing only Francisco Lindor, whom he narrowly beat for the AL Rookie of the Year award in 2015. The only players in MLB history to start at least 400 games at shortstop and post an OPS above .800 through age 23 are Correa, Lindor, Cal Ripken Jr., Alex Rodriguez, and Arky Vaughan.

Bellinger had a disappointing sophomore campaign, at least relative to his Rookie of the Year-winning debut, but a 22-year-old hitting .260/.343/.470 and holding his own defensively when pressed into action in center field still rightfully impresses the hell out of PECOTA. Bellinger has the 10th-highest isolated power (.259) among hitters with at least 1,000 plate appearances since his debut, sandwiched between Bryce Harper (.260) and Nelson Cruz (.256). And in the history of baseball, the only left-handed hitters with a higher isolated power through age 22 are Ted Williams and Eddie Mathews.

Being the best long-term bet in an infield shared with Altuve and Correa is a helluva thing, which is why the Astros moved quickly to sign the 25-year-old Bregman to a $100 million extension that keeps him under contract through 2024. Bregman debuted in July of 2016 and started his career with a 2-for-38 slump, but since then the no. 2 pick in the 2015 draft has hit .290/.372/.513 with plus defense (and plus tweeting) in 351 games. He finished fifth in last year’s AL MVP balloting, but Bregman had baseball’s third-highest WARP behind only Mookie Betts and Mike Trout.

No metric worth paying attention to would ever suggest Arenado is less than a star, but BP’s new hitting metric, Deserved Runs Created, shows him in a brighter light than most thanks to a more nuanced, detailed approach to park factors. DRC+ gives Arenado much more credit than the simplistic, oft-repeated “look how much better he hits at Coors Field” talking point. Toss in Gold Glove-winning defense at third base and he led all NL position players in WARP last season, with a 10-year projection that would make the Rockies very glad to have handed him a $260 million extension.

Perhaps the most underrated superstar in baseball, Ramirez is the only player to crack the top 10 of this list after not ranking as a top-100 prospect. He hit a grand total of 13 homers in 335 games as a minor leaguer, including six in 104 games at Triple-A, but the Indians promoted him very aggressively and Ramirez reached the big leagues before his 21st birthday. He struggled initially, but broke out in 2016 at age 23 and is now coming off back-to-back MVP-caliber seasons. If it’s technically possible to be both a late bloomer and a 26-year-old superstar, Ramirez is it.

Judge’s “sophomore slump” involved hitting .278/.392/.528 to rank among the league’s top seven hitters in on-base percentage, slugging percentage, and Deserved Runs Created. It was admittedly a big step down from his otherworldly rookie season, and he also missed 50 games with injuries, but Judge cemented his status as a fully formed middle-of-the-order monster going into his age-27 season. His top historical comp through 26 being the Yankees’ other hulking right-handed slugger is fun, too. (Giancarlo Stanton just missed this list, ranking 19th between J.D. Martinez and Ronald Acuna.)

Lindor was the no. 8 pick in the 2011 draft out of high school, BP rated him as a top-20 prospect in four straight years, including no. 4 overall in 2015, and he’s been a superstar since the moment he debuted for the Indians in mid-2015 at age 21. The epitome of a complete player, Lindor is a switch-hitting shortstop with 35-homer power, 25-steal speed, a good eye at the plate, and plus defensive chops. Cleveland has MLB’s best pair of building blocks, and Ramirez bouncing around defensively as needed is all that’s kept Lindor-Ramirez from being one of the greatest double-play duos of all time.

This time last year, Soto had yet to play above low Single-A. Called up in mid-May, five months before his 20th birthday, Soto hit .292/.406/.517 with a 99/79 K/BB ratio in 116 games for arguably the greatest season ever by a 19-year-old hitter. His on-base percentage and OPS were the best ever for a 19-year-old, as was his 16.1 percent walk rate, easily topping second-place Mickey Mantle (11.1). Soto projects as an MVP-caliber hitter from now until 2035 or so. His top comps include all kinds of big names, but Bryce Harper at no. 1 and Ronald Acuna at no. 8 is nice symmetry.

Remember all that amazing stuff you just read about Soto? According to PECOTA, he’s not even the best 20-year-old. Guerrero has yet to reach the majors and, thanks to service-time suppression and a spring oblique injury, may not do so until May. Whenever he does arrive, PECOTA is convinced he’ll be one of MLB’s top 10 hitters, projecting Vladito to bat .311/.372/.529 as a rookie. And then each season from 2020-2028, the system projects Guerrero to post a DRC+ within a few points of 150 in either direction. For some context: Vladimir Guerrero Sr.‘s career DRC+ was 139.

Betts was an established star before a breakout, MVP season at age 25. He led MLB in WARP last year and PECOTA projects him to be the second-best player this year. And it’s not just any old no. 2 projection, as his 7.5 WARP for 2019 is a higher projected total than any hitter—including the next name on this list—received from 2013-2018. Betts does everything at an elite level—compared to an average player, his career marks are +133 runs at the plate, +71 runs in the field, and +24 runs on the bases. That adds up to 7.0 WARP per 150 games, making even that fat 7.5 WARP projection seem reasonable.

Who’d you expect, Drew Butera? Trout’s greatness cannot be overstated. Trust me, we’ve tried. Last week, after Trout signed the most lucrative contract in sports history, I wrote more extensively about his decade-long PECOTA projections, which would put him on the sport’s Mount Rushmore. Not only is his projected 80.3 WARP higher than the combined projection for the $630 free agent duo of Harper and Machado, it’s higher than any two players outside of the top nine on this list. Ken Griffey Jr., a first-ballot Hall of Fame center fielder, totaled exactly 80.3 WARP in his 22-year career.

You need to be logged in to comment. Login or Subscribe
Ross Fortner
Just for fun can you tell us the next few names after number 15, like maybe the next ten or so?
Reply to Ross
Sumner Steinfeldt
I know pecota is conservative, but the projections for Acuna seem Neanderthal. Among other things, he'll never match his rookie year (RY) DRC+, BA, and OBP, and won't come within 49 points of his RY SLG. Even though he hit 26 HR in 111 games, he will top this twice with 27 once and 28 once.
This kind of projection makes the whole system seem incredibly flawed and not worth looking at.
Reply to Sumner
James Groves
I agree. When I saw Soto ranked that high, I assumed Acuna would be at least within a couple spots. Most people believe Acuna is the better long term play.
Reply to James
Tyler Y
In the text for Soto, it suggests that Acuna was ranked 8th.
Reply to Tyler
Sumner Steinfeldt
He's the #7 comp for Soto. His projected WARP total for the next 10 years is 34.2, with his decline phase in DRC+ and WARP starting at age 27. Does anyone really believe that 21-year old Acuna is going to contribute less over the next 10 years than a 29-year old 2nd baseman or a 31-year old 1st baseman?
Reply to Sumner
John Ternyila
is Ronald Acuna slighted here ??? he is not Ron Swoboda
Reply to John
newsense
You've identified at least one player for every position except catcher and pitcher. Could you provide the top projected players for these positions ( both starters and relievers)
Reply to newsense
Wyomissing
Any list that doesn't have Ronald Acuna in the top 5 is ridiculous.
Reply to Wyomissing
Patrick
You all are taking this "Acuna got jobbed" thing way too seriously. Aaron didn't make this list, he just compiled it from PECOTA. Instead of just assuming the algorithm got it wrong, it's more interesting to wonder why it didn't give him the numbers you expected (or alternatively, why some of the players who did make the list got higher numbers that you think they should have). PECOTA has seen a lot of player seasons and factors them all in, not just the good ones. It wasn't too long ago that another young Braves outfielder would have seemed to be a lock for this list, but Jason Heyward hasn't come close.
Reply to Patrick