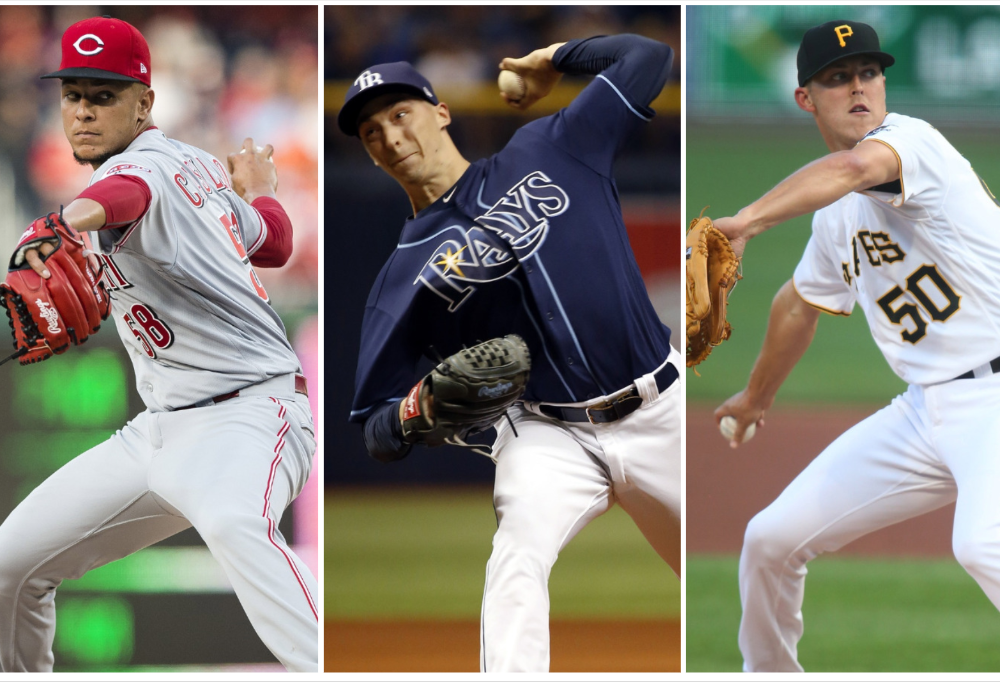 Chosen under the guidance of PECOTA’s projections and same-age player comps, here are 10 pitchers who stand out as prime breakout picks in 2018.

Walker Buehler advanced from Single-A to the majors in his first full pro season, striking out more than a dozen batters per nine innings along the way. PECOTA isn’t sure whether he’s a starter or a reliever, but boy does it love him either way. Two of his top three comps (Edwin Diaz, Aroldis Chapman) are one-time starter prospects who shifted to the bullpen and immediately became dominant, flame-throwing relievers, and the other (Matt Moore) is a former no. 1 overall pitching prospect whose path to stardom was tripped up by injury. Exactly what to take from that as it relates specifically to the 23-year-old Buehler is up to you, but if healthy PECOTA is confident that he can overpower MLB hitters somewhere.

PECOTA has a tricky time evaluating Luis Castillo, because in the minors he was a fly-ball guy whose strikeout rates never matched his high-octane stuff. He had no such problem in his debut—among the 153 pitchers with at least 80 innings as starters last season, Castillo ranked fifth in ground-ball rate and 17th in strikeout rate. He was also first in fastball velocity, yet his changeup and slider may be the real weapons. Even if his ground-ball rate proves fluky, it’s hard to have watched Castillo for 15 starts and not come away a believer. It probably wouldn’t matter, since they’d just be looking to trade him now anyway, but all of 13 months ago the Marlins traded Castillo and two other prospects to the Reds for Dan Straily.

Jacob Faria lacks the high-end velocity of some of the other pitchers on this list, but he averaged a solid 92.0 mph with plenty of movement on his fastball as a rookie and showed a good mid-80s slider along with a devastating, star-making low-80s changeup against which opponents hit just .151 with 35 strikeouts and one home run. Drafted in the 10th round by the Rays in 2011, the 6-foot-4 right-hander posted a double-digit strikeout rate in extensive action at both Double-A and Triple-A. His control and command could still use some work to unlock his full potential, but Faria has more polish than most 24-year-olds and projects to have a sub-4.00 ERA in his first full season.

Tyler Glasnow was one of the worst pitchers in baseball last season, allowing 61 runs in 62 innings for the Pirates, and nothing about his performance inspired confidence. His control was awful, he didn’t miss bats or induce ground balls, and both lefties and righties knocked him around for a bloated .319/.422/.575 overall line. So what in the world is he doing on this list? Glasnow is 6-foot-8 and has a 1.95 ERA with 321 strikeouts in 245 career innings at Triple-A. He also has a mid-90s fastball and a pair of useful off-speed pitches, at least in theory. PECOTA is thoroughly convinced that a 24-year-old with Glasnow’s size, stuff, and dominant Triple-A track record will eventually thrive in the majors.

PECOTA and the BP prospect team agree that Brent Honeywell is one of the elite prospects in baseball, which in itself is enough to pay extra attention to the 2014 second-round pick. He ranked 11th on our top 101 prospects list—including third among pitchers—and PECOTA projects him for a sub-4.00 ERA and double-digit strikeout rate as a 23-year-old rookie. Honeywell works in the mid-90s with his fastball and features a wide assortment of plus off-speed pitches, racking up 172 strikeouts versus just 35 walks in 137 innings between Double-A and Triple-A last season. Service-time manipulation likely means that he won’t crack the Opening Day roster, but even the Rays won’t be able to resist calling him up by May.

Matthew Trueblood’s excellent recap of Jordan Montgomery‘s rookie season has me convinced that the left-hander going from unheralded prospect to full-time member of the Yankees’ rotation was just the start. His fastball, changeup, and slider look like solid pitches, but his curveball steals the show. Montgomery was one of seven pitchers with at least 150 innings and at least 25 percent curveballs, and his curveball use jumped above 30 percent after June 1. And it was a helluva pitch, limiting opponents to a .172 batting average and trailing only Astros super-yakkers Charlie Morton and Lance McCullers in cumulative value for American League pitchers.

Sean Newcomb held opponents to a .191 batting average and one home run with his breaking ball last season, and among left-handed starters only James Paxton, Chris Sale, Blake Snell, and Robbie Ray threw their average fastball harder than his 94.2 mph. His rookie campaign was anything but smooth sailing, however, as the 6-foot-5, 260-pound southpaw’s walk rate was the worst in the league and he failed to complete six innings in any of his final seven starts. PECOTA sees his control improving, but only slightly, yet still projects Newcomb for a sub-4.00 ERA because of his raw stuff and bat-missing ability. If he can consistently throw the ball over the plate, there’s enough talent here to be a front-line starter.

Faria, Honeywell, Snell. Can you see why PECOTA likes the Rays’ gutted roster to out-perform expectations? Blake Snell hurls mid-90s gas from the left side, but after 25 walks in his first 42 innings last year the Rays demoted him to Triple-A (where he has a 2.68 ERA and 208 strikeouts in 151 innings). He returned looking like a new man, posting a 3.28 ERA and 79/29 K/BB ratio in 82 innings after July 1, including 13 strikeouts in seven shutout innings on the final day of the season. Snell needs to throw more strikes, but a lefty with elite fastball velocity, a plus changeup, and a plus curveball is destined for big things. Snell is one of just 17 starters projected for a sub-3.75 ERA and a double-digit strikeout rate.

Jameson Taillon was already on this list last year, but I’ve got a rule: If you have surgery for testicular cancer in the middle of a baseball season, miss one month, and come back to throw another 100 innings, you get a do-over. Taillon certainly wasn’t bad last year, and even his 4.85 ERA after returning in June came attached to far better secondary numbers and mid-90s fastball velocity, but the 6-foot-5 former no. 2 overall pick is capable of so much more. PECOTA not only projects Taillon as by far the Pirates’ best starter, seamlessly taking over for Gerrit Cole atop the rotation, it sees the 26-year-old right-hander as one of the top dozen starters in the National League. What a great story that would be.

The scouting report on Luke Weaver hasn’t changed a whole lot since he was the Cardinals’ first-round pick in 2014 out of Florida State. He throws strikes with a low-90s fastball, puts hitters away with a plus changeup, and could use a reliable third offering. His fastball has had more oomph that expected, averaging 93.4 mph last season, and his changeup looks capable of being plus-plus rather than just plus. In fact, on a per-pitch basis last season, Weaver had one of the dozen best changeups in baseball. Like many changeup-reliant pitchers he’s prone to giving up homers, but he dominated the minors with a 1.99 ERA and PECOTA thinks he’s ready to anchor the Cardinals’ rotation alongside Carlos Martinez.

You need to be logged in to comment. Login or Subscribe
Craig Richards
Not trying to troll at all, but it seems like there's a disconnect between your interpretation of PECOTA's love for Walker Buehler and the projections I'm seeing from his page. He is basically projected as a 4.00 ERA guy with a peak WARP never exceeding 1.7, but you said PECOTA "loves" him. Can you elaborate on the gap? Or, is a 4-ish ERA really optimistic in your eyes based on what Buehler is today?
Reply to Craig
Aaron Gleeman
A few things ... 1. I think a 4.16 ERA for a 23-year-old with one full season of pro experience is very impressive. 2. He's projected for 11 strikeouts per nine innings, which is great. 3. As noted, his top comps are very encouraging as well.
Reply to Aaron
deadheadbrewer
Hi Craig--The NL ERA was 4.34 in 2017, so a rookie pitching 10% better than league average is a good thing.
Reply to deadheadbrewer