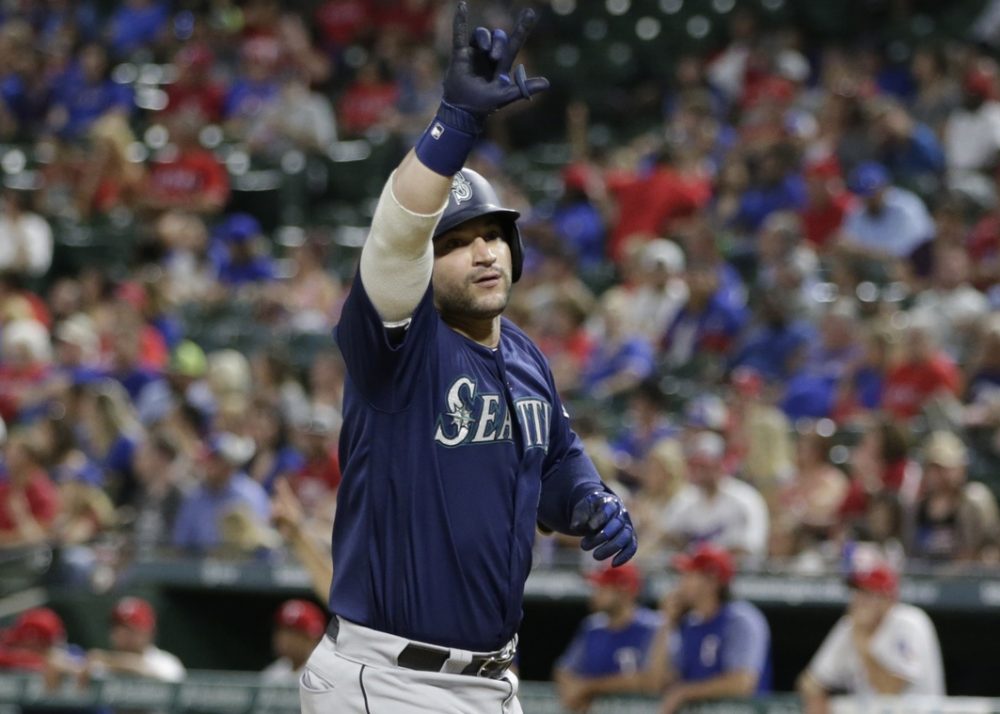 The offseason always makes me think about beginnings; endings too, but beginnings especially. Baseball presents us with so many of them. It’s quite the pressure-packed howdy hey. An MLB debut is its own accomplishment, something few players actually achieve, but they aren’t always triumphant and the whole time, we stare at them.

Once, on my first day at an office job, I rode the elevator up to the 15th floor, then back down to the lobby, then up again. I did that four times, because I couldn’t get my security pass to work, but only two people noticed. My mom wasn’t there. That’s not true for a big leaguer. A big leaguer’s first day draws a crowd. And those beginnings leave quite the impression. We’ve trained ourselves to reject the small sample, but in those debuts, with nothing else to compare it to, it’s hard not to think that what we are seeing is what we will always see.

By my estimation, debuts give us four types of guys.

The Future Hall of Famer

Come on. On August 3, 1959, John Drebinger of the New York Times, writing about the second of that year’s All-Star games, had this to say of Milwaukee Braves manager Fred Haney, and Willie McCovey: 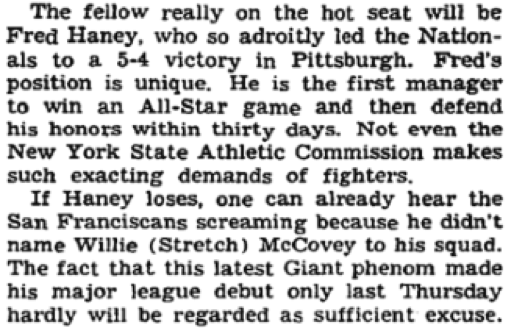 Of course, McCovey actually was a future Hall of Famer, so this is a bit of a cheat, but come on. Come on! They knew. They had to know! McCovey debuted on a Thursday, went 4-for-4, hit two triples, and scored three runs in a 7-2 win over the Phillies, and the next Monday, one observer thought some San Franciscans would scream if Stretch wasn’t an All-Star selection.

Lots of guys have good games, despite only being so-so. In 2017, Kenny Vargas had the worst single-game Win Probability Added for a position player with at least one plate appearance, and even he mustered a few games with multiple hits and a home run. You don’t always know on that first day, but come on. Come on! Sometimes you know.

BP’s own Craig Goldstein was at Stephen Strasburg’s debut, and when I asked him how it was, he said: “It was electric. One of the coolest in-game experiences I’ve had.” Strasburg was a a glass of wine at the end of a long day, an early tax refund; 14 strikeouts later, he let you let down your shoulders. He was a top-of-the-rotation guy. 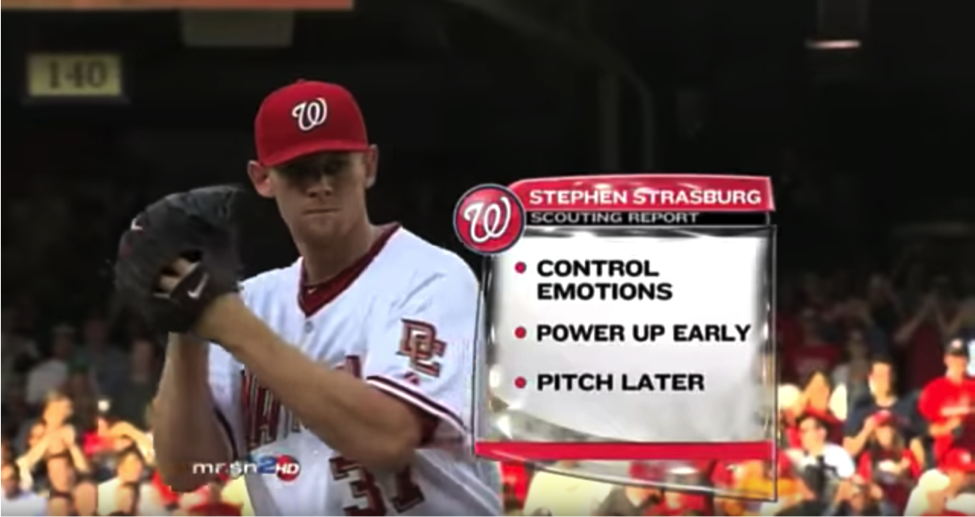 You don’t remember watching a back-end starter debut at first. You don’t remember it the next day, or when you’re putting groceries in your car, or at church, or even when he has that one All-Star appearance. No, you remember a back-end starter’s debut the next time you’re at the ballpark, and you look up, and you see Jeff Locke’s name. Then you remember it and shrug, and say to your friends, “Well, we’re gonna see some runs.” And you probably do.

I think we’re the most frustrated with slow failure, and the most sympathetic to failure that bops us suddenly on the head. A starter who keeps it close only to give up the game late is worst. He’s wasted our time. He made us a bit grumpy. But sudden, rough failure? It floors you; it makes your heart jerk. Good god. Mike Mayers’ debut hinted that he might be scrub, but didn’t you just want hug him? Weren’t you glad that his folks were there? Didn’t you hope they knew what to say to him, the way parents sometimes know just what to say when you’ve gone up the elevator four times?

As Adrian Gonzalez hit his grand slam, there were five fans in visible states of surprise but none of them look mad. They weren’t fussy. How could they be? Sure, they all got bopped on the head, but Mayers got bopped harder. 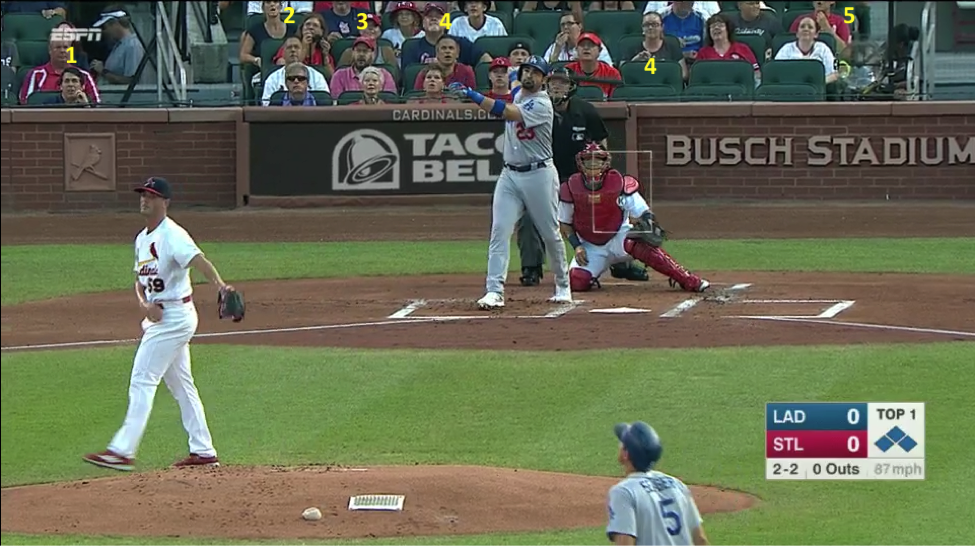 We know the general contour of most baseball careers, but we don’t see all the work that goes into their starts. The parent who first put a ball in their hand. The hours in the cage, or with coaches. We don’t see all of the down days, the days that pull guys through, the sick feeling of relief when injuries turn out to be the minor, the gnawing concern they’ll come back. We don’t get that little hit of metal taste in our mouths as a pitcher takes the mound for the first time, arrived but still on his journey. Despite their journeys happening in public, those moments are private, personal. They’re locked in before debuts happen, become blurry, and then return, a bunch of work ready to dictate whether a first impression becomes what we always see.

All we can know are our own starts, our own journeys, and appreciate those who have joined us at the beginning, the end, and along the way. This is my last piece for Baseball Prospectus. My first piece was published on November 4, 2015, but my start came on October 16, when I got an email from Sam Miller with the subject line “BP” and the conclusion: “Would you have any interest in writing about baseball regularly at Baseball Prospectus in exchange for money?” I’ll never be able to express how grateful I am that he thought I had something to say, or for inspiring me with his own smart, kind, funny work.

I’ll never be able to repay Nathan Bishop for taking a chance on me when he took over Lookout Landing, or Rob Neyer for thinking a developed opinion about bobbleheads could portend something more. I’ll never be able to improve Patrick Dubuque’s writing as much as he has improved mine. I’ll never be as good or wise a friend as R.J. Anderson, Emma Baccellieri, Michael Baumann, Brendan Gawlowski, Rob Mains, Jeffrey Paternostro, and Jarrett Seidler. I’ll never know as much, or be as patient, or give gifts as thoughtfully as Craig Goldstein. I’ll never be as good a sabermetrician as those on our stats team, or have as keen an eye as our prospect team. I’ll never be as good an editor as Bret Sayre or Aaron Gleeman, the latter of whom battled all of the GIFs and screenshots I threw his way, and never yelled too much.

All of those people, and many more, were there at the beginning and now at the end, and along the way. We writers accumulate all sorts of debts, bits of guidance and kindness and trust we’re never able to fully repay, but I hope I can at least pay forward some of what they have given me as I set out.

My journey is taking me to FanGraphs. I’ll be writing about baseball there, and serving as the Managing Editor of The Hardball Times. I never thought I would get to write about baseball professionally and now that I do, I am awed by the chance. I am a dog who has caught a car. But really, this should feel a bit familiar, because there is no other way to describe the experience of having been able to work here, at a place I read and idolized for so long. I never expected to feel at home because I never imagined feeling worthy of it enough to relax and squish down the sofa cushions. But then I met the people at the beginning and the end and along the way, I met all of you, and got cozy.

I’m excited to once again be a BP reader, and discover along with all of you what this wonderful team does next, to see new debuts and new journeys begin. This is a goodbye, and it is an end, but it’s also a beginning. I’m excited for the next step, taking things I’ve learned from this place and these friends along with me, as I look forward to the next cozy spot. I hope you’ll join me.

You need to be logged in to comment. Login or Subscribe
jfranco77
Congrats, and best of luck! Guess I'll need to find a new favorite writer on BP.
Reply to jfranco77
Anderson Adams
I'll miss you here but will find you over there. Congrats!
Reply to Anderson
John Stetson
I think one of your biggest strengths is your writer's voice--a nice balance of humanity and whimsy--and a welcome break from the heavy analytical. Goes down well next to a warm fire. Thanks for all that you do! See you at Hardball Times.
Reply to John
Replacement Cat
I watched that Mike Mayers start, Meg. That was brutal. Thank you, and I look forward to finding you at THT.
Reply to Replacement
Brett Slonaker
Great piece. I'll never forget my first corporate elevator ride and how it makes you feel so out of place and under prepared. Good thing no one has a camera trained on you! Congrats on the move & I hope this means we will hear more of you on EW pod with Ben & Jeff.
Reply to Brett