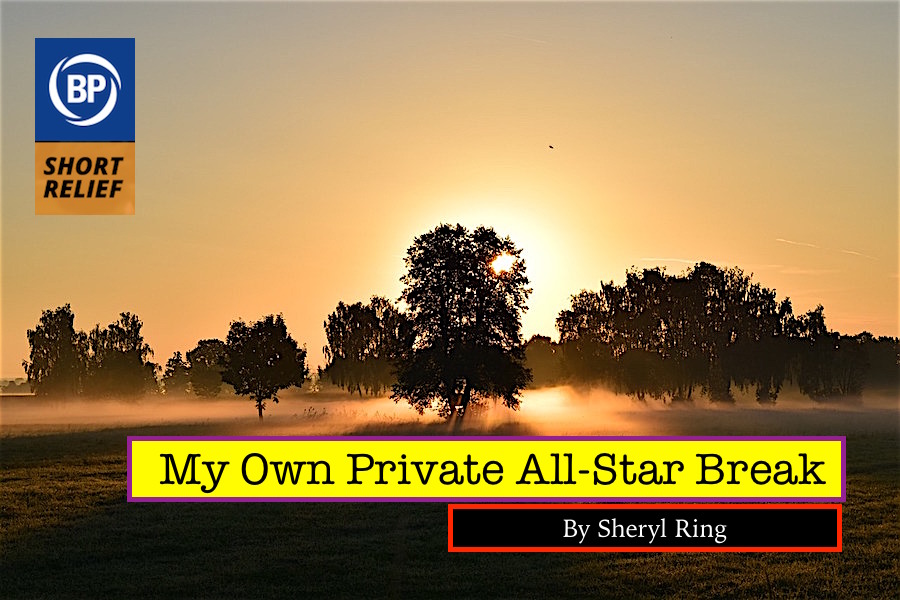 It’s not hyperbolic to say that 2019 has been the most difficult year of my life. I received death and rape threats (even more than usual) because I dared to question the Cubs’ line about Addison Russell. I was in a car accident. A landlord I sued for racial discrimination sent a letter to my boss falsely accusing me of running an illegal narcotics ring out of my office. I had to move because my neighbors were secretly taking pictures of my breasts without my consent and distributing them throughout our condo complex. And now this year for me ends somewhere I never expected: in the middle of a divorce.

Yet perhaps the hardest part of this year was turning 31. I had a doctor tell me a few years ago that because of my Crohn’s disease, 60 was a best-case scenario for my life expectancy. And so although I’ve known for some time I have fewer days ahead than behind, my 31st birthday carried with it a sense of reality, an acknowledgement that time waits for no woman and that I really am more than halfway through this journey.

But in the midst of the turmoil, there’s been hope. Baseball has been the constant.

In some ways, this has been like reaching the All-Star break in a long season. The first half – the bulk of games – are over and in the books. But there are still so many games to be played, games that matter so much more than the ones that came before because their scarcity makes them precious.

In other ways, my relationship with baseball is like a relationship with a living, breathing human. Baseball can sometimes disappoint me, or do things that hurt me. But baseball is still wonderful and magical. D.J. LeMahieu hitting a home run in the top of the ninth, followed by José Altuve matching the feat in the bottom of the ninth. Juan Soto introducing himself to the world in a seven-game instant classic World Series. Anibal Sánchez turned back the clock and pitched like an ace he hasn’t been in several years.

Maybe it’s because baseball, like life, is a series of new beginnings. Gerrit Cole has a new beginning in pinstripes. The Rangers do too with their new ballpark. The Mets with their new manager. The Astros have a new beginning without cheating. In a world shifting underfoot, where I’m not exactly sure what areas of my life will still be there tomorrow, baseball provides a constancy both familiar and reassuring. Come February, Spring Training will begin. The world will keep spinning. It’s nice to be reminded that normality can continue even in the face of upheaval.

I’m hopeful that 2020 will be better. I want 2020 to be better. There will be a tomorrow, and with it the hope that there will be better things than today. I may be into the latter half of the Sheryl Story, but I’m determined that the best chapters are yet to come. 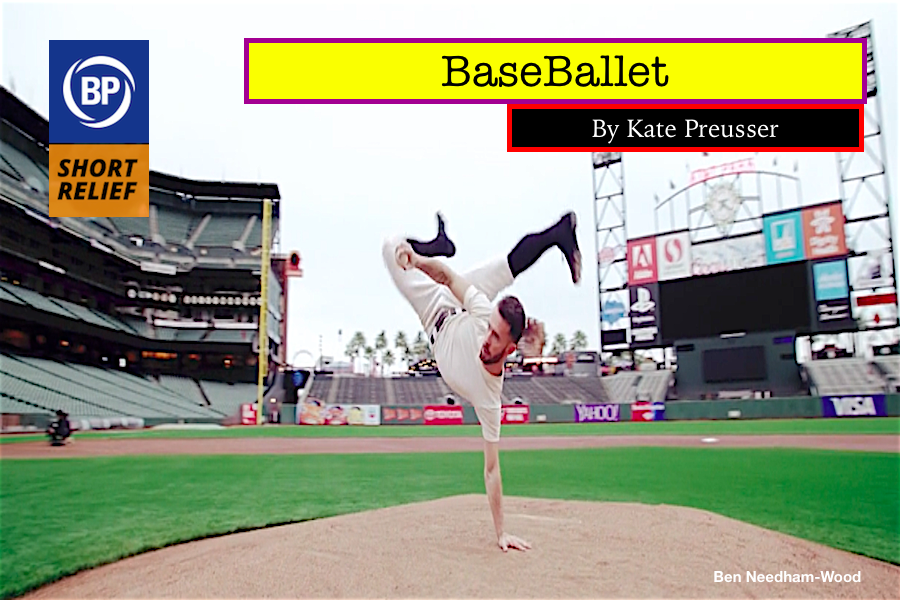 As a fan of both baseball and the television program So You Think You Can Dance, I don’t know how BaseBallet escaped my notice when it premiered last year at the San Francisco Dance Film Festival. A partnership between legendary Giants broadcaster Mike Krukow and his son Weston, an accomplished contemporary dancer, BaseBallet explores the common athleticism and artistry between baseball and ballet.

BaseBallet is made of four movements: a contemporary piece focusing on the competitive relationship between pitcher and batter; a romantic West Coast swing number set at sunset at the trolley car in Oracle Park; a ballet en pointe where ballerinas represent thrown pitches; and a hip-hop number danced on the dugout. Some of the baseball connections are a little more tenuous than others, and dancing on the dugout is nothing novel to anyone who’s been to a minor-league game, but the juxtaposition of the dancers performing their craft at the ballpark is a stirring reminder that dancers are every bit the athlete professional players are.

For as much fun as it is to watch Kevin Pillar glide through the outfield, it’s difficult to imagine him doing this: 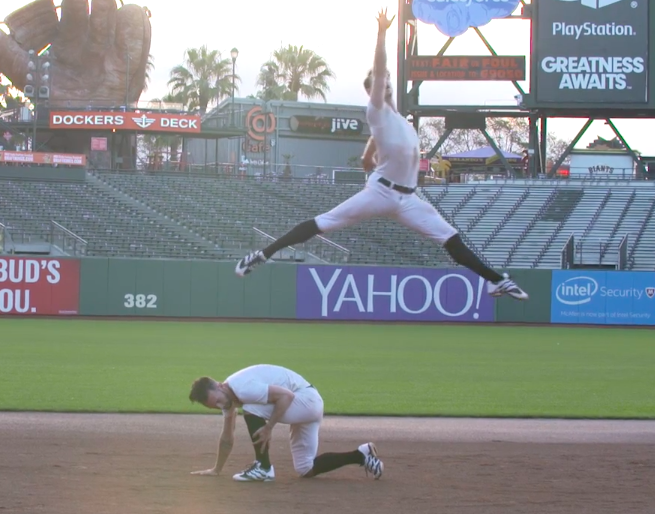 What is also endearing about BaseBallet is the interviews with Mike Krukow talking about the game, and ballet, in equally excited tones, at one point declaring the invention of dance and baseball to have similar starting points: ancient peoples dancing around the fire before one got the idea to see how far he could throw a rock. The overlap between baseball and ballet maybe isn’t one that occurs naturally, but to watch the Krukows sitting on a balcony somewhere in downtown San Francisco, the elder pulling on a cigar and waving his hands as he discusses the beauty of the game while the younger dances his hands across the tabletop, drawing movements in the air, the two feel not far apart at all, which might not necessarily be the case.

BaseBallet serves as a reminder of the way humans can push their physical limits and create beauty in the process. Part documentary, part art film, it’s a new lens through which to view baseball, and a call to remember the artistry underlying even the most routine 6-3 groundout. When we say “baseball is beautiful” we often mean the stories told through the game, the players succeeding against seemingly impossible odds, the sportsmanship and camaraderie on display, the athletic feats of a power pitcher striking out the side or a mammoth home run. We overlook the arc of a pitcher’s arm, the quick feet of an infielder, the outfielder’s gentle leap, the beauty of bodies moving through space. BaseBallet is an excellent reminder of what we might forget in the midst of a pennant chase, the dog days of summer; of what we might have forgotten during the long, cold off-season in talks of collusion and service time suppression and players lined up like pieces on a chessboard to be moved about at will: baseball is, and was, and will be, beautiful. 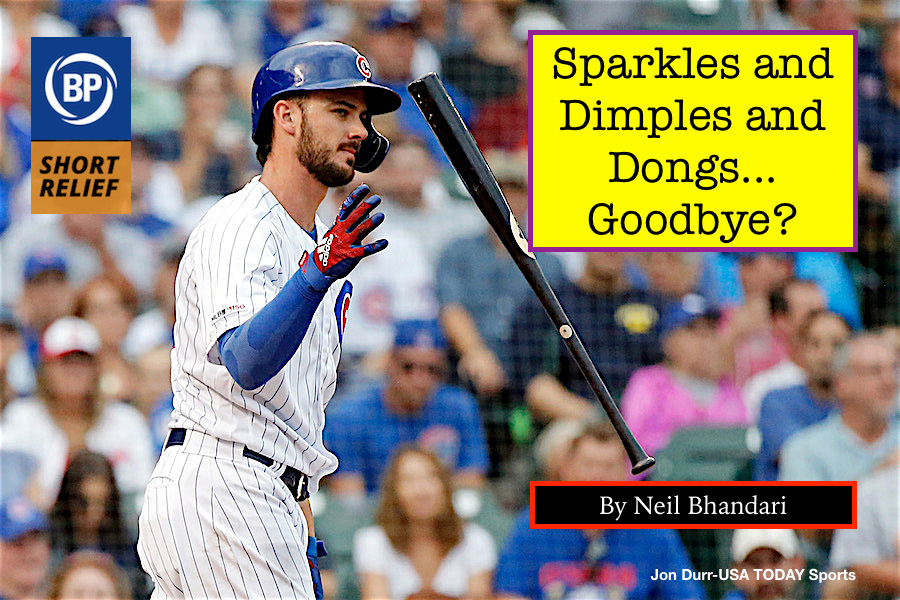 Tom Ricketts’s personal net worth is currently listed at $900 million. If we assume, quite conservatively, given his known assets, recent tax breaks, widespread exploitation of corporate finance loopholes, etc., an average of 5% growth per year, he’ll be on track to be a billionaire by 2023 (Congrats, Tom!) and by 2025 would be worth over $1.14 billion. The Chicago Cubs are currently worth approximately $3.1 billion, a 7% increase over last year. If we assume, again, quite conservatively given their stature, geographic location, current roster, etc., a 5% increase in value over each of the next five years, that would put the franchise value at just over $4 billion by 2025. Now I don’t want to get too deep in the weeds here regarding things like service time agreements, the “luxury tax,” and self-imposed but entirely non-existent salary caps, because if you actually care about those sorts of specifics, you’re already reading about them elsewhere (including other sections of this website). But suffice it to say, the Cubs can afford Kris Bryant.

At this point, corporate greed, like abuse of power, comes as no surprise. So yes, I’m disappointed that a man who insists on making sure we all know that he was a fan before he bought the team is willing to trade one of the greatest players in franchise history just to cut costs, but I’m not surprised. What’s been more surprising has been watching the majority of Cubs fans’ relative indifference, if not outright support, of a potential Bryant trade.

The Cubs spent decades trying to shed their reputation as Lovable Losers, and in 2016, led by Kris Bryant, they finally did. Ironic then, that for many fans, winning a championship wasn’t enough to make that team any more lovable than the losers who came before them. Because Chicagoans, for all of our big talk about our big shoulders and our big work ethic, are really just a bunch of softies who want desperately to be wanted. And to be told that we’re good. And to be told that it’s ok that we are not New York or Los Angeles or Paris. And Kris Bryant, for all his sparkles and dimples and dongs, has never been all that convincing in saying so. Bryant comes across as something of a baseball robot –  a player who would’ve been great and will be great wherever he plays, and he’s so focused on being great that the idea of where he plays seems somewhat incidental. And for some fans, this is simply unforgivable.

So someday soon – this week or this month or next July – Kris Bryant will probably be traded so that Tom Ricketts can save a couple of dollars that he’ll never notice or spend, and the majority of Cubs fans will nod their heads and say “yes, yes, this makes sense – they couldn’t afford him.” And someday later, we’ll all look up at the maybe Hall of Fame worthy numbers he puts up in Washington or Philadelphia or New York and realize that one of our all time greats slipped away because our billionaire owner knew that we wouldn’t, and couldn’t, say or do anything about it.

You need to be logged in to comment. Login or Subscribe
Jesse Severe
Sheryl - wow, that is one tough year. I wish the best for you in 2020. You are very good at this job and your writing is appreciated. Maybe just the all-star break is pessimistic - you've got a long playoff run in ya.
Reply to Jesse
Todd Tomasic
Sheryl-22 years ago I was saved by very difficult tried-once liver transplant. 2020 I will
will celebrate my 21st season as a 20-game season ticket holder for woeful Pittsburgh
Pirates. Despite the losing I still get a charge out of the beauty of the the game just as
Kate does. It is why football no longer means anything but large men crashing into each
other.
Reply to Todd
frank noto
Sorry for all you have been through, let's hope 2020 is a far better year.
Reply to frank