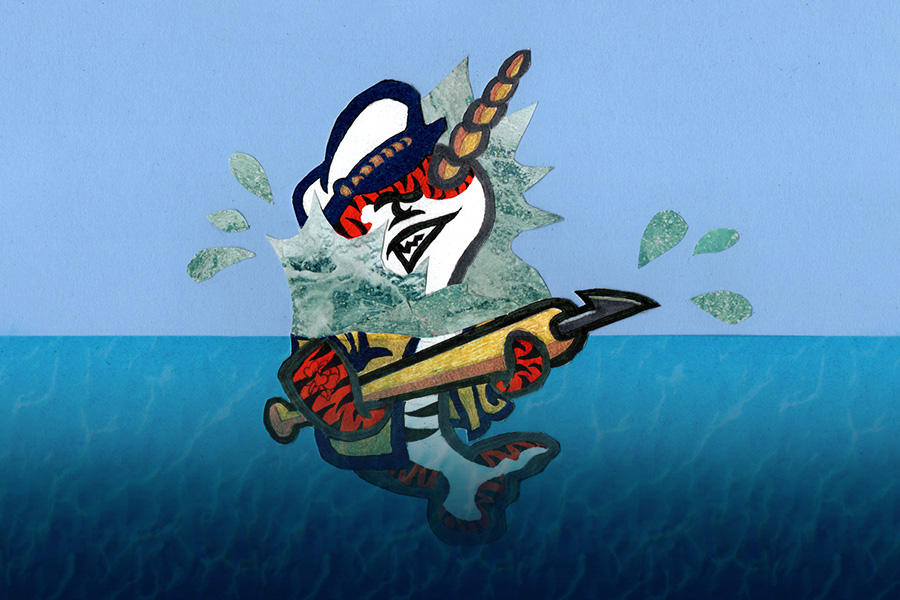 Every Tuesday and Thursday,Too Far From Town shines a light on the 42 (really 43) minor league baseball teams in danger of losing their major league baseball affiliations, effectively leaving them for dead. Today we focus on the Norwich Sea Unicorns, a Short-Season Single-A affiliate of the Detroit Tigers. You could take in the previous installments here.

As far as the Oxford English Dictionary people know, the first time the word “Hello” was written in the way we use it today appeared in the Norwich Courier in 1826. Apparently “Hello” introduced itself to the American vernacular in the Connecticut newspaper thusly: “Hello, Jim! I’ll tell you what: I’ve a sharp knife and feel as if I’d like to cut up something or other.”

In September 1998, the Kansas City Royals Board of Directors unanimously approved the sale of the team to New York lawyer E. Miles Prentice III. For the low, low price of $75 million, Prentice received a custom jersey and a formal press conference in his honor at Kauffman Stadium. It was as official as it could get. The St. Joseph News-Press went with the headline “Miles to the rescue.” A few months later Prentice talked in this very here website of his big ideas and grand plans, and learned, to his utter confusion, Tim Belcher heard he was not going to get approval from the league. He was a not owner(elect)-like open book, discussing his hatred of batters not taking the first pitch (he reportedly voiced this dislike to then Royals manager Tony Muser), and more important matters:

…Look at the impact of this game on so many minorities, whether it be Italian-Americans, German-Americans, Irish-Americans, African-Americans, or Hispanic-Americans. Each group has
benefited from being able to play the game, and that’s something we have to nourish and to encourage for the future.

… I think we have had some fair success in Latin America, and the Dominican Republic is still a very fertile ground. I think there’s going to be a lot of talent coming out of the Dominican and
other areas. We’ve already seen a few players come out of Australia and Japan. The other countries around the world will be slower to develop, and again, it’s going to be a cost-effective decision. I’m not going to shut out those possibilities, but I believe that there are a lot of kids in
this country who aren’t playing baseball but ought to be. And we’re going to go and really scout this country. We’re going to put a lot of resources and a lot of effort into doing that.

A case in point: the RBI program in Kansas City. Last year, they had about 520 participants with four corporate sponsors. This year, one of the investors in my group became a leader of the RBI program, and they had a very ambitious plan to get 40 sponsors and maybe 700 kids. They got their 40 sponsors–Tom Watson paid for five, and at least half of the sponsorships came directly or indirectly from my investor group. They had, as of last count, close to 1400 applications from kids to play. So that, to me, is a real positive. To have that kind of involvement from the inner cities is wonderful–we need to have the African-American community back in the ballpark, playing baseball.

Almost exactly one year after the press conference at Kauffman, Tim Belcher’s prophecy/threat came true: Major League Baseball owners voted 29-1 against Prentice III joining their august company, citing a concern over the high number of investors in his ownership group (40, including Negro League Kansas City Monarchs legend Buck O’Neil.) Prentice ended up trying and failing to acquire four other MLB franchises, most recently losing to Jim Crane in the Houston Astros sweepstakes back in 2011. Prentice never seemed to have enough money in his pockets to make the league comfortable. He “settled” on owning some minor league teams, including the Oneonta Tigers, which he moved to Norwich, Connecticut 10 years ago.

The Connecticut Tigers didn’t feel the need to change their nickname at first; they couldn’t have minded the association with the big league Tigers at the time, for one thing. But in 2015 they noticed their neighbors get a major boost in merchandise sales and ballpark attendance when they began to call themselves the Hartford Yard Goats, and last August, during negotiations on a lease extension, the city of Norwich cleared their throat and said it would be cool to have the name of the city in the team name. General manager Dave Schermerhorn cited Norwich’s nautical history and Norwich sea captain tall tales as the reasons why Sea Unicorns was chosen. (Unfortunately, he was apparently not asked if his surname had anything to do with the final decision.)

Last December, local police officers and firefighters modeled the team’s new uniforms at the Kelly STEAM Magnet Middle School. (24 years prior, 10-year-old Dave Schermerhorn witnessed the introduction of Tater the Gator, the new mascot of the Norwich Navigators, at the Samuel Huntington Elementary School auditorium.) There was a dark cloud in the form of a question mark hanging over the whole situation, the question of Will the Norwich Sea Unicorns only exist for one season?, which around the Ides of March morphed into Wait, will the Norwich Sea Unicorns throw a single pitch?, and for the diehards out there, Was E. Miles Prentice III associated with yet another press conference announcing a future event that will ultimately never come to pass?

Prentice was in the news last August, when his position as chairman of the Center for Security Policy was brought to the public’s attention. The Norwich Bulletin quoted the website of the Southern Poverty Law Center, a nonprofit organization that monitors domestic hate groups, when describing the CSP:

Founded in 1988 by former Reagan administration official Frank Gaffney Jr., The Center for Security Policy (CSP) has gone from a respected hawkish think tank focused on foreign affairs to a conspiracy-oriented mouthpiece for the growing anti-Muslim movement in the United States.

Both the VP of the Tigers, C.J. Knudsen, and Norwich mayor Peter Nystrom said they didn’t know of Prentice’s position with the CSP. Knudsen said it has had “no impact” on the team. Nystrom said he had never even heard of the Center for Security Policy. (“Mr. Prentice is a baseball owner, and that’s our knowledge of him.”) Prentice then released a statement which called the Southern Poverty Law Center “radical leftists”, and declined to meet with the Connecticut chapter of the Council on American-Islamic Relations because they are “associated with terrorist organizations.” Tark Aouadi, the executive director of the Council of American-Islamic Relations who requested the meeting, said the statement was racist. Prentice released another statement the following day, writing, “After a short, long-planned family vacation next week, I will be meeting with influential leaders of various faith communities to affirm my personal commitment to welcoming and serving all of our fans, irrespective of their religious beliefs, if any, as we have always done.” Thirty days later, Prentice met with the Rev. Gregory Perry, pastor of the Greeneville Congregational Church, Swaranjit Singh Khalsa of the Sikh community, and Muslims Dr. Mohamed Diagne, Rab Nawaz, and Abdul Halim Jones. Aouadi was not invited. Prentice was asked to denounce the CSP, or, according to a joint statement, “at least to denounce one aspect of the ideology” of the Center for Security Policy. Prentice declined to do either.

The first documented use of the word “Goodbye” predates the first use of “Hello” by at least 250 years. Somewhere between 1565-1575, English writer and scholar Gabriel Harvey wrote in a letter, “To requite your gallonde of godbwyes, I regive you a pottle of howdyes.” “Godbwye” is a contraction of “God be with ye.”

You need to be logged in to comment. Login or Subscribe
newsense
Sea Unicorns???
Why not the Norwich NARWHALS ???? Much more consonant and whaling-specific.
Reply to newsense