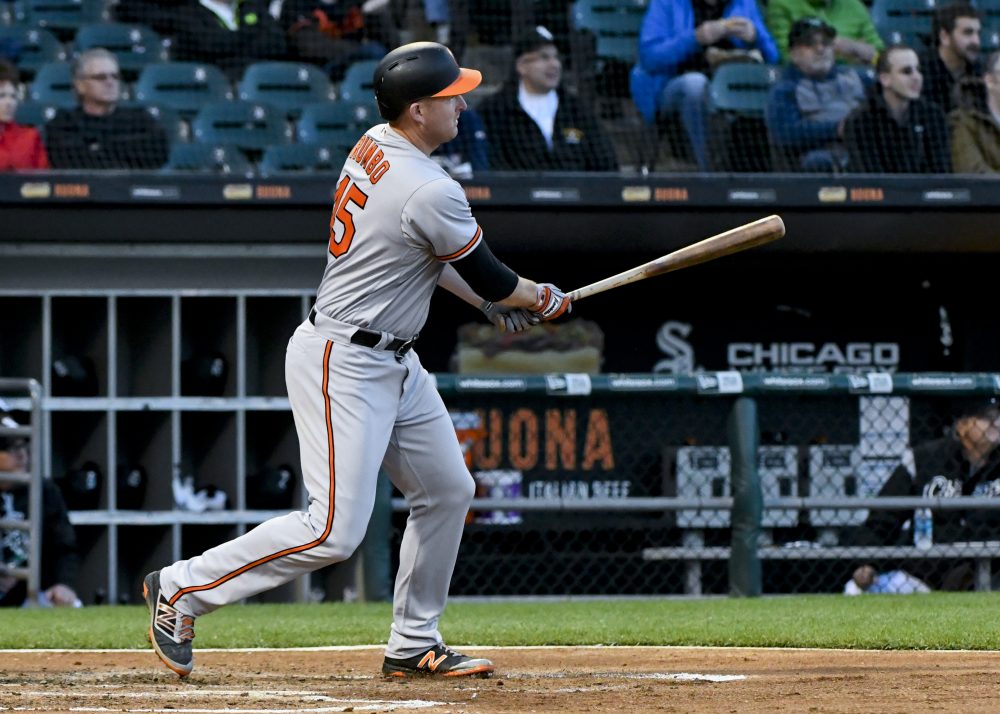 Funny story: I had originally entered in a $108 bid for Trumbo. Although I didn’t really have a need for another bat, I figured that adding some more offensive depth would allow me to make a trade sometime soon to address an area of need. As for Trumbo, he was red-hot, with four homers and nine RBIs over his last six games heading into play on Sunday. But then, shortly before the FAAB deadline, news broke that Trumbo was dealing with a sore knee and would not be in Sunday’s lineup. Being that Trumbo already missed time this season due to the same ailment, this was concerning, and a triple-digit dollar bid seemed too high. I lowered my bid to $88. So much for winning him by one dollar. Oh, and he homered again on Sunday, this time as a pinch-hitter. Like I said, I didn’t necessarily need Trumbo, but missing out on him in that fashion is a bit deflating.

Making his first big league start in a month, Peralta was outstanding last Tuesday, blanking the Pirates over six innings while allowing just two hits and striking out seven. Perhaps most importantly, he didn’t walk anyone, this after a six-walk outing on May 19 earned him a ticket back to the minors. Peralta is scheduled to make a pair of starts next week and both matchups are favorable. The 22-year-old righty could stick around in the majors for awhile longer if he continues to impress.

My lone purchase of the week, Minor has settled down after a shaky start to the season, pitching to a 2.84 ERA and a 1.00 WHIP over his last three outings. Add in a favorable matchup this week against a Padres offense that ranks in the bottom third of the majors in runs scored, batting average and OPS, and I’m comfortable with this buy.

Banished to the bench in recent weeks, Franco, thanks to J.P. Crawford‘s injury, will now get another opportunity to prove that he deserves everyday at-bats. Saturday’s four-hit game was encouraging, but the 25-year-old former top prospect has a lot of work to do if he wants to turn around what has been an underwhelming 2018 season. I actually viewed Franco as a solid bargain pick in drafts this spring, as despite mediocre batting averages, he did register a combined 49 homers and 164 RBIs from 2016-2017. Tim Heaney decided that it was worth $26 to gamble on a rebound, and I agree.

This could turn out to be a wise pickup for Derek Van Riper as Miller, acquired by the Brewers from the Rays a couple weeks ago, was called up to the majors over the weekend and could see significant playing time at both middle infield positions. Miller was dreadful last season, and he sports a mediocre stat line so far in 2018. But keep in mind that this is a guy who slugged 30 homers in 2016. Maybe the change of scenery will reinvigorate him. Power-hitting middle infielders are hard to find in deep mixed leagues.

This just goes to show how much confidence the Mixed Auction Touts have in the “stability” of Tampa Bay’s ninth inning situation. Romo, who has racked up four saves in the last two weeks, can’t even garner a bid higher than $11? Who knows what’s going to happen here, but this is hardly a high-risk purchase by Scott Engel.

I still don’t see the Padres trading Brad Hand. But if they do, this buy could rank near the top on the list of most profitable FAAB purchases of the season. Yates has been flat-out dominant this season. Seriously, how often do we see a pitcher whose ERA (0.87) is lower than his WHIP (0.90)? If Hand gets traded tomorrow, Yates’ FAAB price next week would likely approach (and maybe even exceed) $200.

One-trick pony alert! Davis has actually been playing quite a bit lately, and he’s swiped five bags in the last two weeks. For the price of nothing, this could be…a steal.

Acquired from the Nationals for three minor leaguers, Herrera could split the closer role with incumbent Sean Doolittle, but it is more likely Doolittle keeps the job with Herrera pitching primarily in the eighth. He is still a solid investment for Brian Walton of Creative Sports at this price. Herrera’s rate stats and strikeouts were strong for the Royals and this should carry over to Washington. I did not bid because I have a glut of pitching and am stuck in the position of either dropping one or making a trade I’m not going to like later today.

Mac Williamson wasn’t the answer for the Giants in left field, so Austin Slater gets another opportunity to crack the lineup. It’s likely Slater mostly plays against lefties, with Alen Hanson scooping up most of the at-bats against righties but Slater could push beyond that limited role if he performs. Slater had five home runs, eight steals and a .344 batting average in 223 at-bats in Triple-A and some of this power/speed will translate to the majors if he can get the playing time.

My strategy to acquire every marginal Brewers’ second baseman or shortstop is working perfectly. Thus far, I have…

2. Acquired Hernan Perez as part of a trade

3. Got Tyler Saladino via FAAB

4. Reacquired Sogard via FAAB after releasing him…

and now have added Miller to my collection of middling Milwaukee middle infielders. Miller has five home runs with a .259/.328/.430 line in 177 plate appearances, so he hasn’t exactly been a zero this year. The key will be playing time and with Orlando Arcia not performing, Miller has an opportunity to crack the starting nine if he hits.

I dropped Pence last week and Craig Mish of SiriusXM happily took advantage of my roster crunch. Pence has done almost nothing this year (OK, his walk-off hit yesterday was fun) and while he could bounce back and beat out Slater for time in the Giants outfield, it is more likely that Pence is finished and gets released at some point this summer.

You must hand it to Hunter Strickland. He really opened the door for fantasy managers to speculate on closer opportunities in San Francisco. Mark Melancon is the probable favorite for saves for the Giants, but Dyson and Tony Watson could see chances as well. At $37, Dyson is fine as a low-end speculation play for Steve Gardner of USA Today.

Smith has not been mentioned as part of the Giants’ closer mix, but his numbers have been lights out and he could certainly pick up some saves with Strickland out. Low-end relief speculation in mono leagues is fine, particularly with so many unreliable or bad starting pitchers at the back end of the player pool.

Michael Wacha’s oblique injury opens a spot in the Cardinals’ rotation for Gant. He is mostly a fastball/changeup pitcher who sits around 93 miles-per-hour with the heater. Gant is acceptable as a spot starter/fill-in but his lack of a consistent third offering likely limits him to a relief role long-term. His upcoming two-start week looks OK on paper, but with Cleveland’s bats heating up, I would avoid Gant unless you’re desperate for strikeouts.

The trade I’m considering is Phil Hertz of Baseball HQ’s Nick Ahmed for my Shelby Miller. Hertz has much more upside in this deal, but I need offense and Ahmed is surprisingly on pace for over 20 home runs. I will need to adjust in 2019 for the availability of arms via the free agent pool versus the paucity of bats. I couldn’t give away a starting pitcher this week.

There was plenty of competition for Dyson’s services, which makes sense being that he does appear to be Bruce Bochy‘s preferred choice to serve as the closer fill-in for the injured Hunter Strickland. Plus, he does sport solid numbers overall for the season (3.03 ERA, 1.09 WHIP). But Dyson’s recent performance has been less than stellar, as he’s allowed runs in two of his last three appearances, and the Giants do have two other legitimate options with closing experience in Mark Melancon and Tony Watson. I would not have gone to $9 on Dyson but Derek Carty is in a tight saves race where he could gain four points within a few days, so the aggressive bid is understandable.

I was one of the $3 bidders for Miller, figuring that he could be an upgrade at MI over Miguel Rojas, but Derek Carty (yes, him again) wanted him a little more than I did. The key here is playing time, but it’s not like the Brewers are loaded with reliable middle infield options. As much as I liked the Miller buy in Tout Wars Mixed Auction, I like it even more here.

Well, it was only a matter of time before the Royals traded Herrera, and the move actually came a bit earlier than expected. This was a real bummer for his fantasy owners, as he will now set up for Sean Doolittle, who has been nearly automatic so far this season. But if Doolittle gets injured or begins to struggle (very unlikely), Herrera would be the obvious ninth inning replacement. Regardless, his elite ratios are valuable in a non-mixed league, so five bucks is a fair price.

Injuries have resulted in Reyes seeing increased playing time of late. His season stat line remains abysmal, but it’s worth a dollar to see if he can turn things around. And then there’s the multi-position eligibility factor, as he can be slotted in at second base, shortstop or third base. Positional flexibility is always a good thing. Positional flexibility in an -only league is a great thing.

Like many major leaguers, Trivino used to be a starting pitcher, in college and his first 2-3 seasons in the minors, before moving to a relief role in 2016. This led to an uptick in Trivino’s velocity, and his upper 90s fastball and low 90s cutter play in a major league bullpen. Blake Treinen is locked in as the Athletics’ closer but if Oakland decides to sell at the deadline, he could move to a contender and leave Trivino in a position to grab some saves. Clay Link of Rotowire nabbed Trivino. Link has Treinen and used his FAAB to hedge his bets on the Oakland bullpen. Link is first overall and first in saves but could lose 3-4 points in the category if Treinen gets moved.

Having James Shields and Steven Wright on my team as reservable pitchers is a tactical advantage in LABR but since they’re both marginal options, it has left me in the suboptimal position of having to pick up a $1 reliever from time to time to fill out my staff. Harris was my third choice, behind Bedrosian and Anderson. With no $0 bids in LABR, I’m reluctant to go the extra dollar to “state” my preferences.

I made a trade this week, moving Albert Pujols, Jason Kipnis and Carlos Gomez to Gardner for Michael Brantley. With Lucas Duda and Tyler Naquin off the DL, I had an opportunity to acquire a clear upgrade while giving up three everyday players who aren’t nearly as good as Brantley. If Pujols and Kipnis are healthy and productive, I lose the trade, but I like getting the best player in the deal in Brantley, who looks healthy and has returned to his 2015 form, absent a few stolen bases. Kipnis has picked it up in June while Gomez has just looked bad.