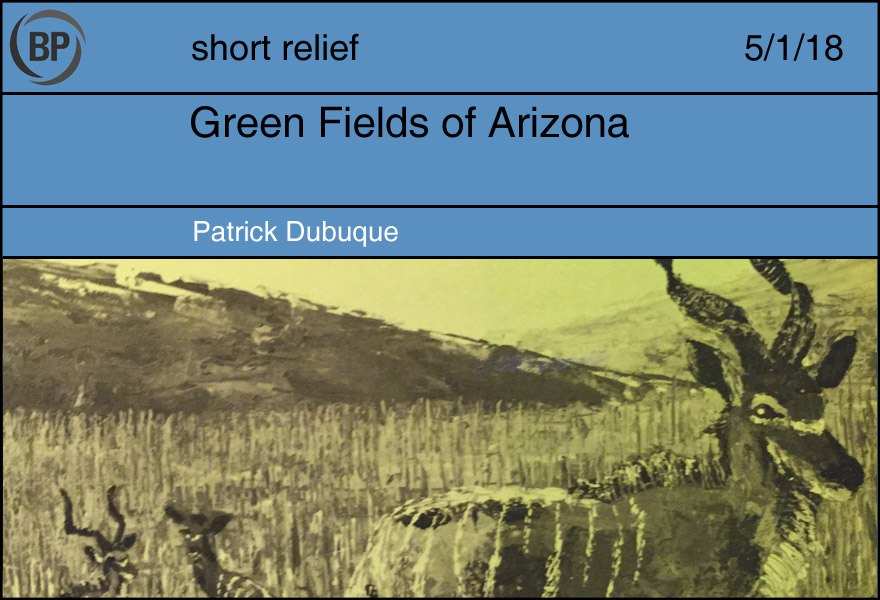 So in the evening, again, we started ahead of the porters and went down and across the highways and through a deep thicket of strip malls and across a train depot to the stadium, where the ground was broken and the walking difficult, and afternoon sun was very hot. We walked until we reached the dugout where we chewed seeds and willed ahead the dusk. I held my bat in my hands, ran my fingers along the grain and felt that it was good, let my gaze linger on the pink clouds that took the shape of beautiful, sleeping women. I turned to my friends and smiled; the hunt would be good tonight. Tonight we would get one.

From the blind we watched the flitting of the gray birds in the fields, thin long-legged creatures that twisted and kicked, and waited. We watched their movements, and their patterns. Once when drunk I had claimed that I was great at hitting the birds, and the others laughed at me, and brought it up: “A.J., tell us again how great you are at hitting the birds! Teach us how you hit them!” And I would laugh as well, because there is no choice but to laugh with men, even when the matter is serious, and I explained that I hit them well because I knew them, that I knew the soul of the pitchers. “What is the soul of a pitcher?” they continued to laugh, and I told them: “The truth of pitchers is that they do not know war. They are bred to escape, to dodge and dance and flit, never to charge. They are afraid, if you know they are afraid.”

They laughed, and I knew the young ones did not take it seriously, and I allowed them not to. It did not matter. That was what youth was; telling them would make no difference. “You must wait for the slider,” was all I told them. Sometimes you could wait a whole evening for the slider that does not break, and it will not appear; such is life. You hunt again tomorrow. But when it appears, you must be ready. Life only gives you so many of those sliders. You cannot waste them.

“The hitters today are no good,” I told Zack. “They hunt for everything. They see only prizes, and money. They have ceased to be afraid of looking foolish. There is no dignity in their swing; they are paragraphs full of exclamation points. We destroy them with money, and with numbers. We ruin them.”

“I hit because I must hit. That is all.”

Finally I took my turn in the clay, held my weapon in the familiar tension of age. And then I saw it: the slider, slow and wounded. I knew I must lead it, but not too much. Only just so. Only just — 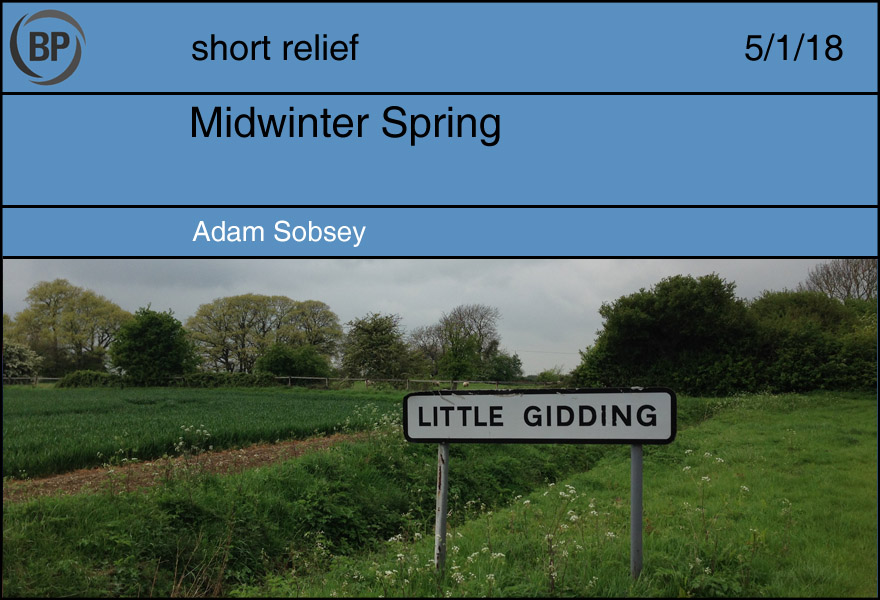 A clammy evening at the ballpark. Should have brought a jacket. Seats are wet from earlier rain. Entire sections of the stands are empty. The crowd numbers in the hundreds. When a call goes against Buffalo’s pitcher, you can clearly hear his manager, Bobby Meacham, object to the umpire at living-room volume: “That’s not down.”

The beginning of the baseball season means the coming of spring, of course, but opening day is a tease. After the Eastertime sunbursts comes an inevitable period of weather that must be what T.S. Eliot meant by “midwinter spring […] sodden towards sundown.” With April showers come a reminder that the season is long indeed. You settle into its discomforts and consent to play through them: squirm in the wet seat, using your own pants bottom to towel up the rainwater which will stay with you until you get home. April has lasting consequences.

Here are a few, right before you. Buffalo’s roster includes several players whose first Annual comments I wrote, four and a half years ago. That was the April of their careers; now they’re in the midwinter spring of Triple-A, “suspended in time, between pole and tropic.” Rowdy Tellez’s funny name inspired a little wordplay in his comment. In 2015 he was nineteen years old and already had light-tower power and an $850,000 signing bonus. Now, still only twenty-three, he looks like a big lug at first base, balding on top, and he grounds to second—except the second baseman muffs it. Minor leagues.

Roemon Fields: glee in the comment over this undrafted free agent out of an NAIA school in Kansas. Fields’s elite speed alone made him a name to remember (but don’t confuse it with Roman Quinn), and the name in turn occasioned more wordplay. Now he’s twenty-seven and batting barely over .100. Not .200. One hundred. There’s no cute name like Mendoza Line for that one. Dalton Pompey’s comment solemnly invoked Emerson and Whitman and foresaw a clear path to the starting center field job in Toronto; now Pompey ranks below Roman Quinn in evaluations, and Quinn is still in Triple-A, too.

And so it goes, haltingly. The game is as clammy as the night. Joe Biagini gets banged for a clock-violation ball four, and he and Meacham converge on the ump and spend the next two minutes wringing an explanation out of him. So much for pace of play. The opposing starter for Durham is a soft-tossing, garden-variety right-hander who has been in the minors for eight years and has never had one player comment written about him, but he’s putting Buffalo to sleep tonight: two hits in six innings.

Boys of Summer, sure. But this is the time to see them, in midwinter spring, in the rain. Around the seventh inning it lets up. I take advantage and leave after the stretch. I should stay to the end, but it’s only April, early yet, and it’ll be years before it’s too late. 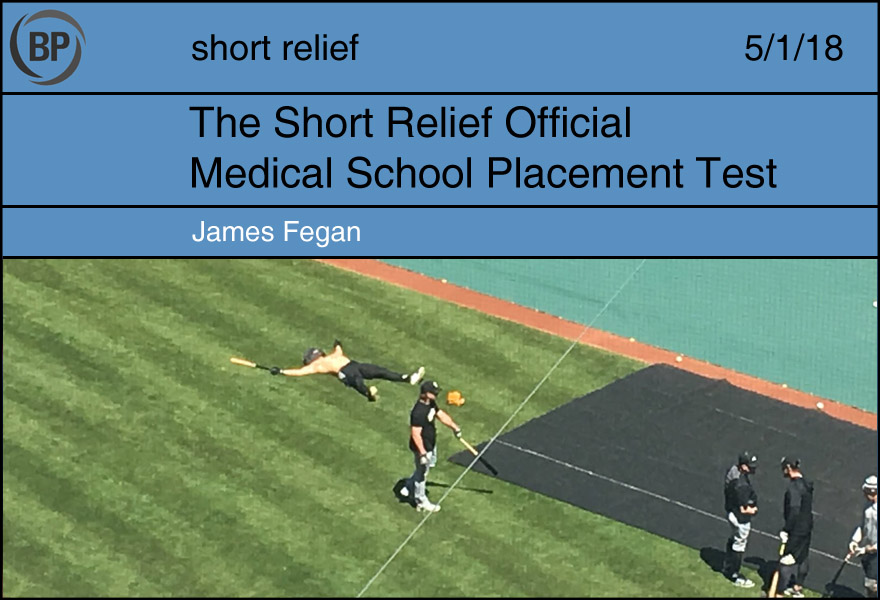 What does this image say to you, on a personal level?

{ } The blissful days of summer. There is nothing so serene and enveloping as a baseball field in the sun. I too wish to rest half-naked in its bosom.
{ } As the old phrase goes, to sleep in public is human, to be partially nude while doing so, divine
{ } Millenials will make anything an AirBnB these friggin days!
{X} This is a medical emergency

Whoa, even if it is, are you a doctor?

You’ve caused quite a stir leaping onto the field, better say something to assure everyone there’s a professional on the scene

{ } “AOOOOOOOGA!!!!” Is this how ambulance sirens sound? It is, right?
{ } “DEFIBULATORS! TRACHEOTOMY! LOBOTOMY! BACKEOTOMY!”
{ } “Be calm everyone. No reason to be alarmed. I just saw you from afar and decided to come running”
{X} “I’m Dr. Meredith Grey, and I’m here to see your anatomy”

These guys sure are big up close, and they don’t seem to like you at all! Why has the patient gotten up and started running away?

{X} Chase after him but also ask for a scalpel “SCALPEL!” Hold out your hand expectantly. You haven’t sold a damn thing since you told that security guard you were an optometrist as you hopped the fence. Time to start selling stuff now
{ } Stuff your hands in your pockets, avoid eye contact and whistle your heart out as you walk away very casually from these men running at you with bats
{ } All doctors like to begin emergency procedures by telling a joke. Go with that good one you know: “Jimmy Buffet and Chief Justice Roberts are fishing on the lake, but their boat tips over and sinks, because also on their boat is the entire Aetna corporation, and with his last dying breath Jimmy Buffet asks Chief Justice Roberts why he invited the entire Aetna corporation, and Chief Justice Roberts said because corporations are people too! And then they both drown and die. And Jimmy Buffet’s fans want to attend his funeral but his corpse is too bloated and disfigured for a funeral, and there’s a lawsuit.” Baseball players always love that joke!
{ } Ponder whether this is still a medical emergency

{ } Ask if they have seen any good movies lately, don’t wait for answers before offering theories about the shimmer in ANNIHILATION (“it represents the gosh darn political discourse!”)
{ } Bring up golf, the proven way to immediately disarm any white ballplayer, and a larger percentage of the Latin players than you would think, you racist
{X} Say the weird Grey’s Anatomy thing again
{ } Take responsibility and apologize for an obvious misunderstanding just long enough to wriggle away again