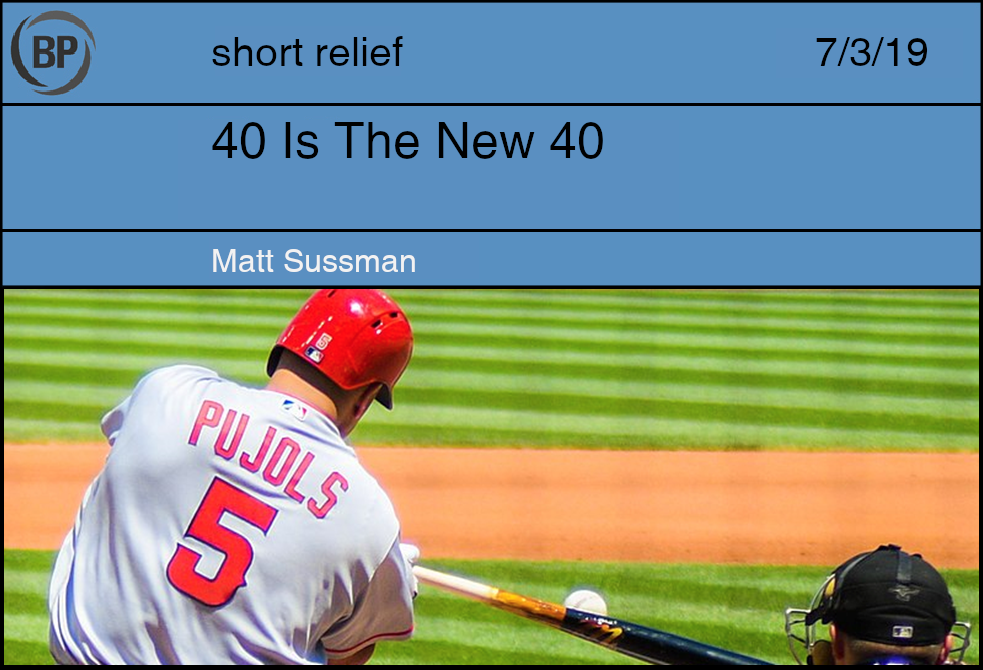 Venus Williams is the same age as Albert Pujols. Contrary to what you may have heard, he is definitely 39 years old, the same age as the elder Williams sister, who lost to 15-year-old Coco Gauff in the Wimbledon first round. When you’re playing tennis at age 39, there are no expectations, just awe. Williams reached not one but two Grand Slam finals when she was 37. It wouldn’t surprise me if she made one more, though the odds are that she won’t. For that sport to afford an opportunity for a high school freshman to compete against a president-eligible grown-up demonstrates the sport’s accessibility.

Rare is the 19-year-old that plays in the majors. They’re all over the minors and college. It’s extremely rare for a teenager to face off against someone nearly 40. Once in a while there will be that occasional faceoff; Pujols did face Elvis Luciano, 2019’s lone MLB teen, and grounded out against him.

There could be more teens in his future, since the contract already promises him money for two more seasons. But it’s unlikely; only a dozen teenagers, including Luciano, have played in the majors this century, and two-thirds of them were position players. The swarm of teenagers was largely curbed by the mid-1970s.

But the dearth of fortysomethings, which will include Pujols next year, is a recent phenomenon. There have been two such players this year, one of them being Ichiro’s swan song and the other being Fernando Rodney. Next year, we’re looking at just three potential 40-year-old major leaguers: Pujols, Rich Hill and Erik Kratz. Ten years ago there were 14 quadragenarians, and nearly double that amount in 2007. The olds are fading away because they’re preemptively being pushed to the human breaking point in their late 20s, and the quality of baseball has never been higher because of it.

We can assume Pujols will be one of the last 40-somethings to swat taters, although Nelson Cruz at 38 seems to have enough stubborn braun to get there. But we’re just not going to see that anymore. I don’t know if the teens are going to be sad about it, but they’re definitely going to lose the opportunity to roast them on social media after facing them in a game. 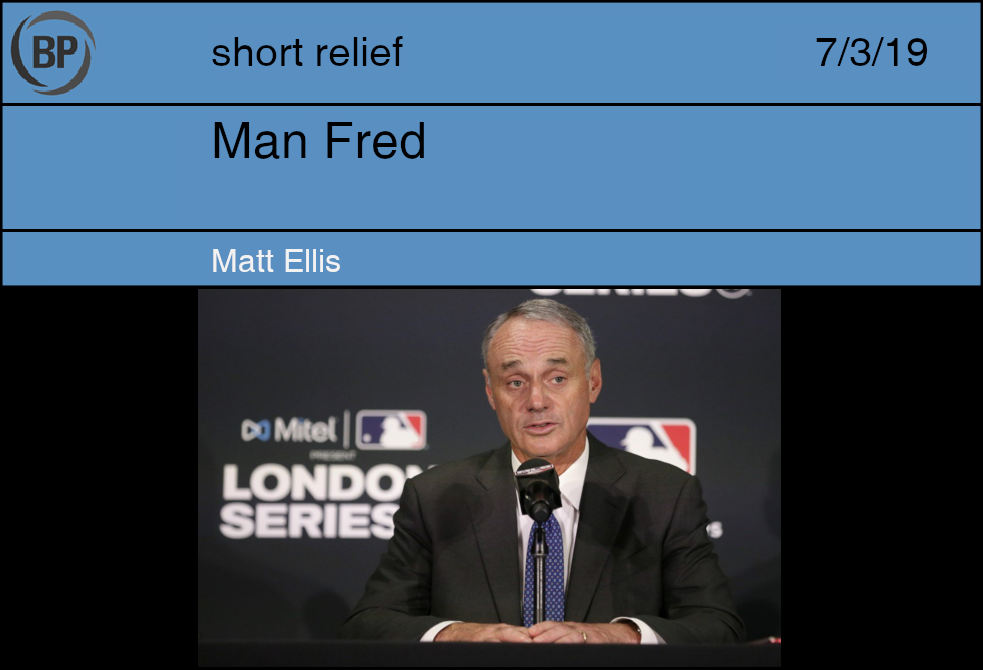 It’s right and proper to yell at those in power, whether grievances are legitimate or not. That’s just how it works. I have a favorite candidate running for president, and I will spend the next however-long defending them from critiques assailed by detractors, but the minute said person sits in the chair of power, it’s over, buddy, you’re The Man now. That’s just how politics works. You can trust me on this, I’m a professional Politics Knower™.

In our wonderful game of baseball, the buck stops–whether metaphorical or literal–with one man, the commissioner himself, Mr. Robert D. Manfred, Jr. In his short tenure, Manfred has overseen a number of controversial events, from the extension of netting to debates over the doctoring of the ball, which has been all but confirmed to be real by independent researchers. Baseball’s last commissioner, professional ear-cupper Bud Selig, was notorious for being a slightly out-of-touch champion from the ownership class skeptical of email, whose greatest achievement may or may not have been staring dumbfounded into a television camera when the 2002 All Star Game ended in a tie, throwing home-field advantage in the World Series into chaos.

Nevertheless, one would be remiss in thinking Selig would have approached recent controversies in the same manner. The ball? Manfred suggests it’s because they are handmade, which is insane considering the fact that MLB is a multi-billion dollar industry pretending to have no control over the manufacture of its literal namesake as a commodity. Star players unsigned through June due to ownership hoarding money and using sabermetrics as a cost-cutting mechanism? Selig probably would point to Bobby Bonilla, who just made $1.19 million dollars yesterday while waking up at noon, or something.

So how do fans respond? I took a quick survey of the national climate to see how Manfred’s rule is impacting the masses. Presented below is a special selection of one of the few things America is truly good at, as defines our national character: yelling at the man.

nobody can grip the baseball again tonight, super cool of you Rob Manfred.

Rob Manfred sent a case of the extra extra juiced balls over to London. What a joke.

Tell me again how the Wilpons didn’t know Madoff was a fraud and how the @MLB commissioner Rob Manfred is protecting them? pic.twitter.com/7Zn3OM08lY

Broadcasters are addressing Rob Manfred by his title “Mr. Commissioner” in their interview. Does he think he’s the Queen? “Just call me Rob, I hate baseball” would be more appropriate.

Rob Manfred just said ‘the world is getting smaller.’ Uhhh

It’s official! The 2026 MLB All-Star Game is coming to the City of Brotherly Love.

MLB Commissioner Rob Manfred has some jokes too 😂 pic.twitter.com/a3x3Js1ph5 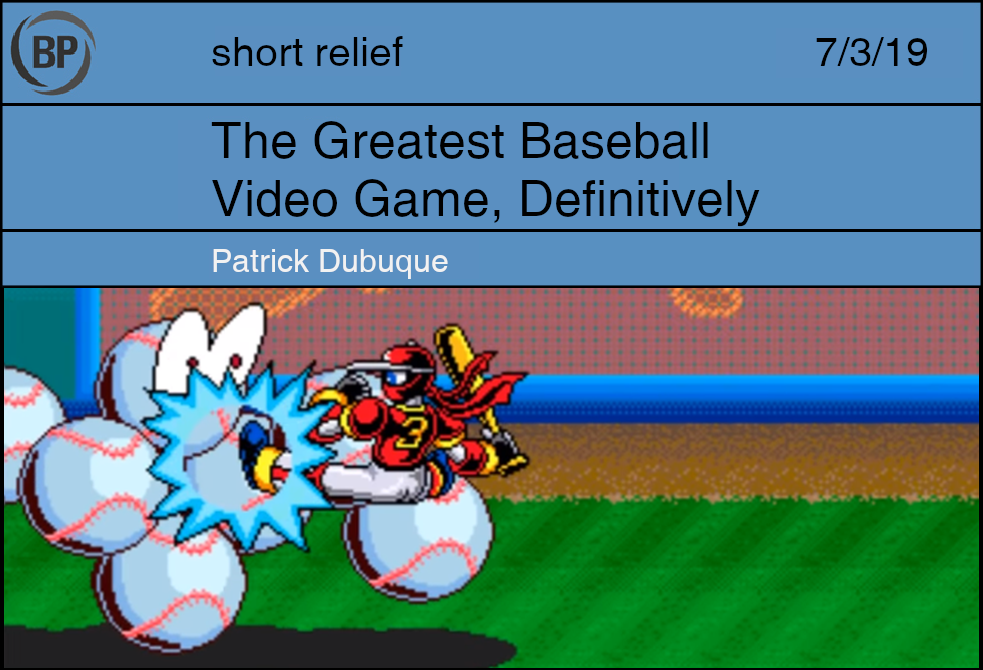 Long ago, I used these hallowed halls of baseball knowledge to establish the worst baseball video game of all time. The time has come to complete the circle, and crown the greatest. The elderly among us prefer the cartoonish simplicity of NES RBI Baseball, or the clean and playable Baseball Stars. Millennials point to the increasingly polished iterations of The Show. The lost generation between fawns over MVP Baseball 05.

There’s no need for them to fight any longer. Because they are all wrong. The greatest baseball game of all time is none of the above, because it’s an unknown arcade title that sold all of 43 cabinets in the entire United States. It is the 1993 Irem beat-em-up, Super Ninja Bat Man.

Ninja Baseball Bat Man is the near-future story of four sentient baseball-playing robots who have been recruited by the blue-haired Commissioner of Baseball to retrieve six artifacts stolen from the Hall of Fame by a secret society. Their pursuit takes them across America, beginning in Seattle and ending in New York, where they fight robotic baseballs, gloves, and bats wielding other, smaller bats. The first boss of the game is a plane that you fight inside another plane.

Your robots are modeled after players who were probably exciting in 1990 when the game went into development, and less so three years later on its release:

After clearing the girders of a New York city highrise, the final level takes place on the surface of a flying baseball stadium spaceship.

Ninja Baseball Bat Man plays like the beloved arcade Teenage Mutant Ninja Turtles, strolling along 2.5-dimnsional planes battering screens of enemies, with the notable exception that it is superior in every way. The robots have a surprising number of combo moves available, the graphics are sharp and intensely colorful, and it’s impossible to miss the level of detail imbued into the design and animation of every enemy and background. This was clearly a labor of love, as evidenced by the Geocities-level website maintained by the game’s progenitor. It just wasn’t a labor of marketing.

The game’s final boss: none other than the commissioner himself, who combines all the memorabilia you’ve retrieved with the gold statue of Babe Ruth to make a crazed death cyborg. So many sentences in this article are just fun to type. 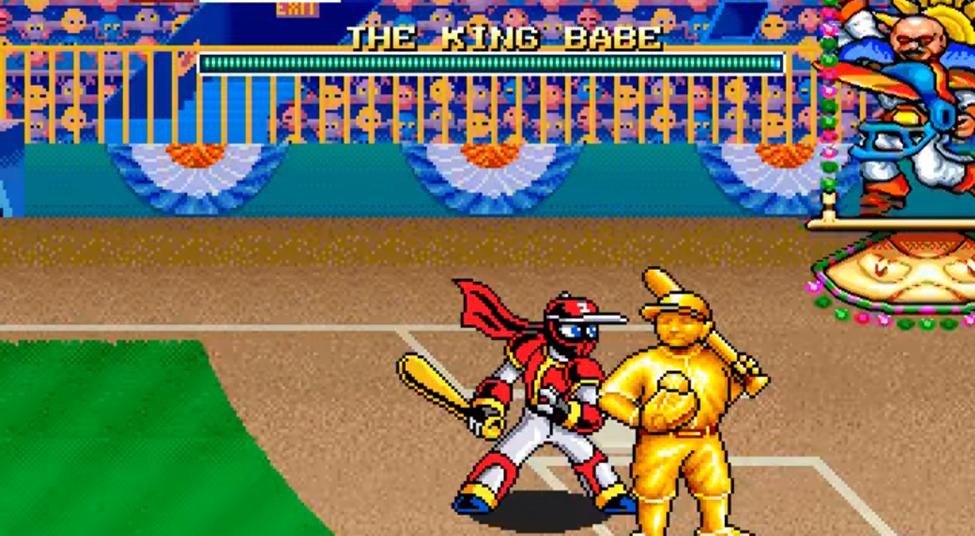 Having defeated the boss and restored peace to baseball, your heroic robot takes a swing at the villain and dingers him into the moon. End credits.

You could argue that there are more realistic depictions of baseball in video game history. You could argue that the truest, purest form of our beloved game does not include a robot with a red scarf battling a collection of junk from an attic coalesced around the mounted head of a buffalo. You could argue these things, but honestly I can’t understand why you would. Ninja Baseball Bat Man was given to us in 1993, and we rejected it; is it a coincidence that the sport itself fell from grace one short year later? No. No, it is not.