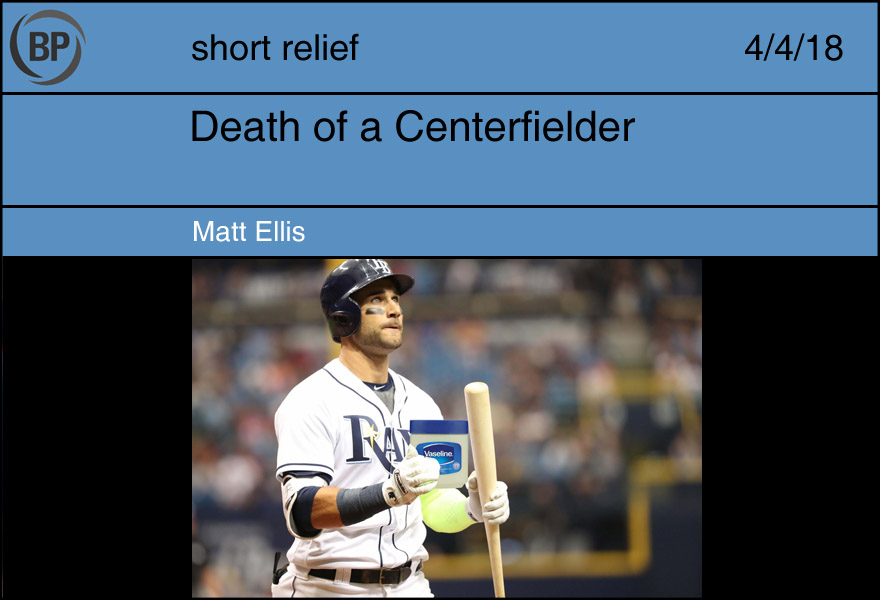 They were staring at their phones, the weather app reading 37, when it began, there, under the clouds, in the heart of the big apple. Three-thirty, but on it went. Windbreakers screeching during opening workouts from them, there, running and walking and in the press box they had stopped their working or their kidding to point to the tweet, that tweet that shook the baseball world.

#Rays Kiermaier will try something new today to combat cold weather vs #Yankees – covering his whole body with Vaseline to serve as an extra layer against the wind.

Still on he went, lathering his arms then his legs, finally even the back of his neck in petroleum jelly. So liberal with the application, perhaps emboldened by the responses dinging by the minute on his phone bringing requisite dopamine hits: It began to drip down over the outside of his uniform, first on the top and finally down below, to the ankles.

“That stuff is going to freeze!” somebody, beer in hand, guffawed.

Kiermaier grounded out in the first, and watched from center, alone, as the top of the order was turned over in the bottom of the inning. A woman in section 201 searched for her phone, dropped down that small little crack between the concrete and the seat directly below.

“Oh my god, he’s putting more on!” someone said, standing up behind her.

“It’s not even that cold!” said another, a man wearing what could best be described as a three-inch-thick fleece jacket held together with patches from each of the Yankees’ World Series victories.

Then in the bottom of the second Gregorius hit a gapper past the head of Robertson, and so he ran. Playing that deep would have been a problem for an athlete of another physical constitution, but this was Kiermaier. So he ran, picking up speed with each lifting leg until the ball started to fall, downwards, and he put more weight on his right foot and then used it to push himself, far to his right, reaching for the falling comet before it could fall on the ground ato unleash its damage. The ball fell into his mitt and his chest made contact with the grass, and on he went, sliding forward, head first, through right field picking up speed until he met the concrete wall on the other side. The collective gasp mercifully muted the sound.

“Oh my god, it happened,” said one of them, clamoring out of the dugout. “He finally went and done did it.”

“It’s his uh….the whole body,” Dr. James Andrews, team physician was saying, standing next to the groaning outfielder. “The only thing holding it together is the vaseline covering him from head to toe.”

He was standing next to him as the stretcher pulled up, and seven men and women, all wearing light blue polos and visors with those loud velcro straps in the back lifted him into the gurney. “Why?” he asked.

“We might as well get somebody else out here. This doesn’t look good,” Andrews said.

Span jumped out of the dugout and fidgeted with his cap a little bit, snugly fit as it was straight from the factory. He put his mitt on his left hand and ran out, into the grass following that strange translucent path etched into the grass like a lawn water slide, pointing to that empty spot by the 408 printed on the wall. He stood under the fog, 34 years old, as if to shout to the world that he’s not only got some left in the tank, but that he’s ready to be the face of the centerfield grass for the rest of Tampa Bay’s 2018 season.

That was all they said. They worked quickly, the grounds crew picking up the bits of the exploded uniform to hide them from the cameras that would inevitably turn it into a viral moment, the crowd willing themselves to unsee. Then the heavens opened, the rain pouring down, the lightning flashing, and they rushed for the cover of the concourse, leaving alone on his side near the pile of bricks, the rain running off his hat, dead an hour after his fourth start of the year, Kevin Kiermaier, center fielder, Tampa Bay Rays. 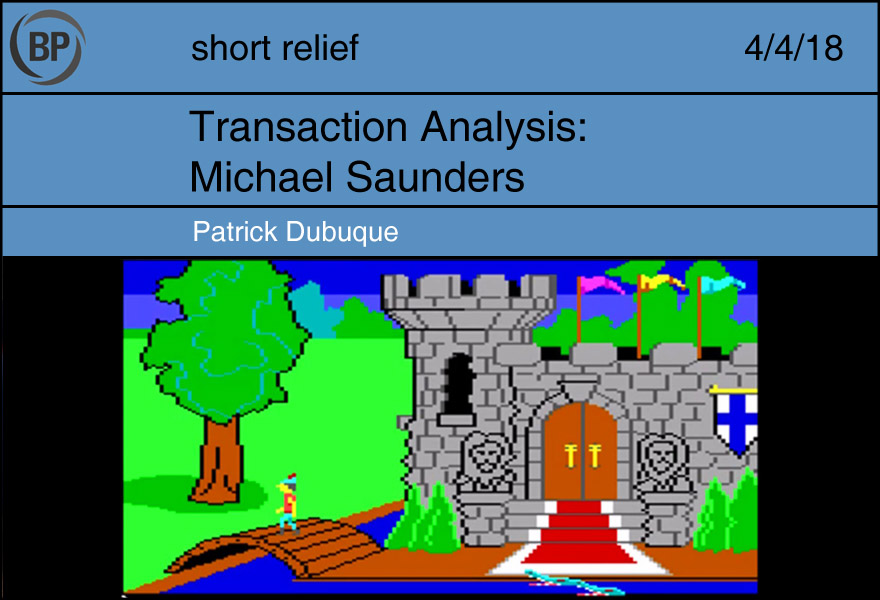 As a boy I remember walking a mile up the empty, leaf-domed avenue to my friend Andy’s house. Bradbury wrote the pavement into existence: the quilted flower-tinged air, the waving, tended lawns of picturesque homes, stained glass hung from every front window. I trudged the entire length as an exercise in childhood torture, spanning the twenty-minute chapter break between play and play, stepping over the cracks in the sidewalk and quantifying my hunger and fatigue. Finally I would arrive to stand under the looming twin garage doors of their stately home, and ring the doorbell to punctuate the completion of my test. I could leave that baneful pastoral existence, the one I would come to imagine with envy, and race into the basement to play computer games.

In the eighties, a personal computer was still a luxury in itself, and Andy, his brother Cory, and I would huddle around the sixteen-color monitor to play whatever we could. The usual choice was the King’s Quest adventure games, in which a little pixelated man would move across various screens, do things when you typed them in, and most of the time, died. There were a million ways to die in those old games: scorpion bites, collapsing bridges, chest-bursting aliens. Games have come a long way since those early Sierra titles, which assumed (correctly) an infinite supply of childhood free time, and sought to absorb every moment through nonsensical puzzles and cruel game design.

Many games could be made unwinnable: forget to pick up an item on screen A, and you were locked into a room with no exits on screen C. Games these days don’t do this anymore; not only do they try to respect the player’s time, they also respect the story too much to allow a loop not with an unsatisfying ending, but just the lack of one, a position with no path forward, a situation where you’re already doomed and you simply don’t know it. We accepted this as kids, and perhaps it was to our benefit: it told the story of student loans, of growing old, of being forced to reconcile what you wanted to do in life and what you were able to achieve.

Michael Saunders was born on one of those days I walked to Andy’s house, probably to play the brand new King’s Quest III. Three years ago, he softlocked his baseball career on a random sprinkler head. This week, Saunders signed a deal to join the Norfolk Tides. 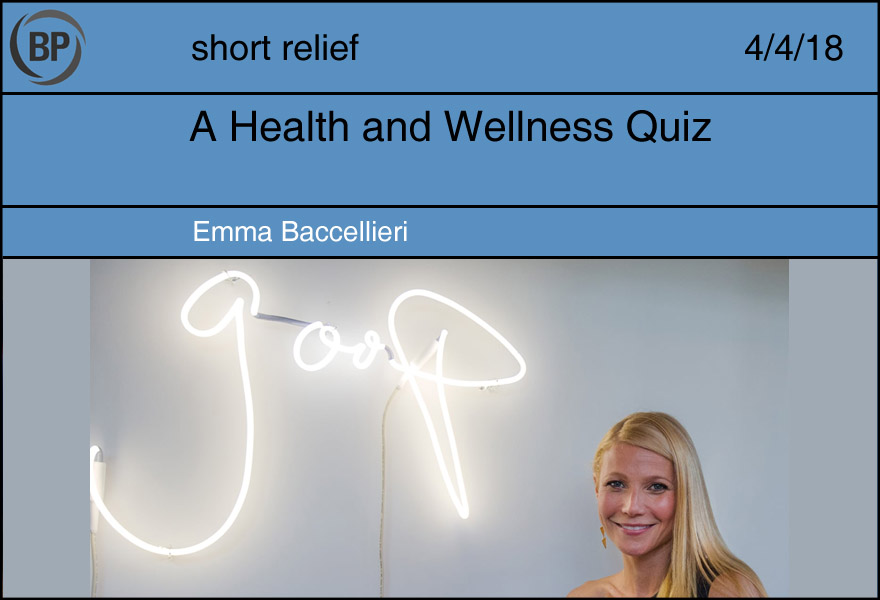 How hard and fast a rule should the three-times-through-the-order standard be? Do relievers need to warm up? At what point do platoon splits tell you that it’s worth it to sit one of your best position players? All fair questions to ask about rookie Philadelphia Phillies manager Gabe Kapler. Here’s a different question: are the following excerpts from the lifestyle blog that he wrote from 2013 to 2017, appropriately titled Kap Lifestyle, or from Gwyneth Paltrow’s lifestyle blog, Goop?

1. “I’ve discovered something of a trick, and I think I’ll be doing it for the rest of my days: Adaptogens. Herbs and botanicals from ginseng to certain mushrooms, adaptogens are said to help the body deal with both mental and physical stress, and they’re seriously worth investigating.”

2. “I just discovered tamarind paste. If you buy the hype, I’m now stronger than I was 15 minutes ago.”

3. “Even if you can’t travel, the most important variable in the health + work equation is commitment. Emphasize halting your routine and smelling the roses. Genuinely appreciate the tangible and intangible beauty all around us as part of our processes.”

4. “Replace everything processed in your home with foods from the earth. No packages, no preservatives. You’ll feel and look healthier, and I won’t have to organize an intervention on your behalf.”

5. “Choose whole foods. The closer a food is to its original form, the less processed sugar it will contain. Food in its natural form, including fruits and vegetables, usually presents no metabolic problems for a normal body, especially when consumed in variety.”

6. “DEET, and other chemical insect repellents, are like the high fructose corn syrup filled, heavily processed versions of what our society considers food. DEET was originally engineered as a commercial pesticide before we decided to put it on our skin. Just sayin’, if something was designed to kill something alive, I don’t want my cells drinking it.”

7. “It is that time of year, folks. I need to lose a few pounds of holiday excess. Anyone else? I like to do fasts and detoxes a couple of times during the year, the most hardcore one being the Master Cleanse I did last spring. It was not what you would characterize as pretty. Or easy.”

8. “I can honestly say I enjoyed eating the softer, edible bones of the chicken that I just now devoured more than the meat. I inhaled some of the harder portions as well; if I could grind it up in my teeth, it was going down. Now, most folks aren’t going to be crushing a plate full of bones, although our jaws and teeth are adequately equipped. More generally, humans transform the bones into broth or stock, which I’m thrilled to experiment with at some point. But my intuition is leading me down the path of chewing, rather than drinking, as I would in the wild animal kingdom.”

9. “Crystals that live on altars should be cleaned on average once a month. If you wear a crystal or meditate with a crystal daily, it should be cleaned once a week. (Instructions below.) Cleaning is necessary because it removes any dense or stale energy the crystal may have picked up in its environment, or from you.”

10. “You can’t study football on a baseball field using hockey equipment and the rules for soccer and then claim you’ve disproven the existence of football.”

You need to be logged in to comment. Login or Subscribe
Michael Beaton
Sounds like Kapler and Paltrow were made for each other. Has anyone told them? Nice connection and article Emma. Also as a chemical engineer I can't help but throw my two cents in and suggest that we try to judge processed foods in a biological/medical and case-by-case basis. Being "natural" does not make a food or chemical intrinsically healthier than "synthetic" even if that might be a general trend.
Reply to Michael