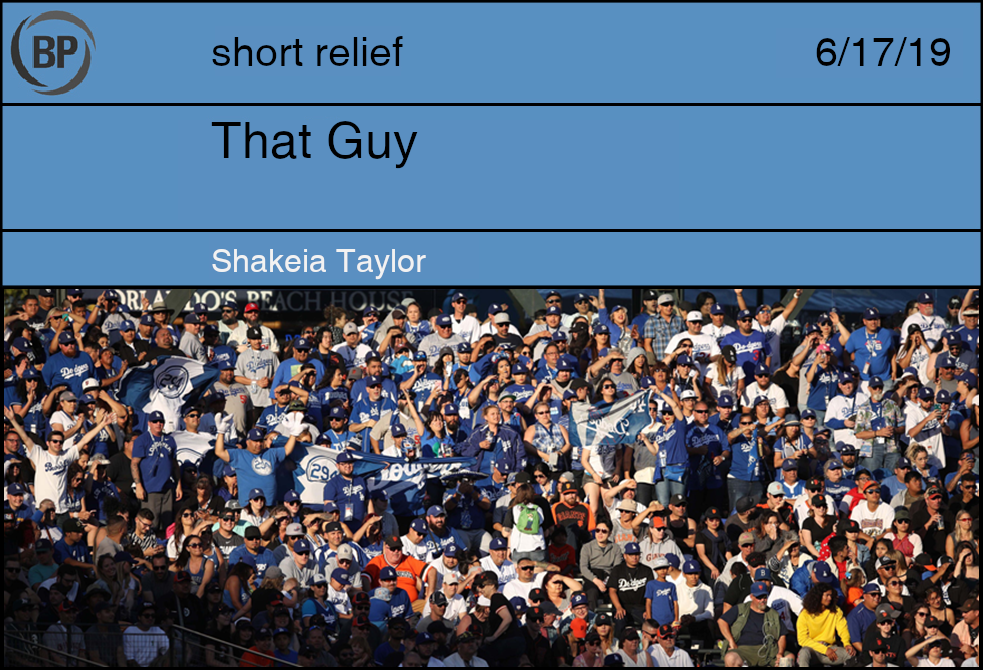 You know the guy. Or maybe you don’t. And if you don’t, take my word for it, you don’t want to know this guy. He’s the season ticket holder who likes to remind you he’s had his seats for 30-plus years. He’s the guy who loudly expresses his thoughts and opinions on every single thing in the game with zero regard for facts. He thinks the manager should be fired. He thinks the pitcher needed to be pulled three innings ago. He wants to tell you what to eat, you know, just in case it’s your first time. He informs you of which guys on the team are “good guys.” This guy is a pain in the ass and a complete annoyance to my game experience.

I sat in front of that guy this weekend. Of course, because I went to a game and it never, ever fails. I’m not sure why I have such bad luck with ballpark neighbors, but I’d like to ask the god of sports fandom to cut me a break. Have I not suffered enough? I mean, hello, my sports allegiances aren’t exactly perennial winners. But whatever I’ve done in my life to constantly sit by the loud and wrong guy, I’d like to take it back. To whom do I owe an apology? 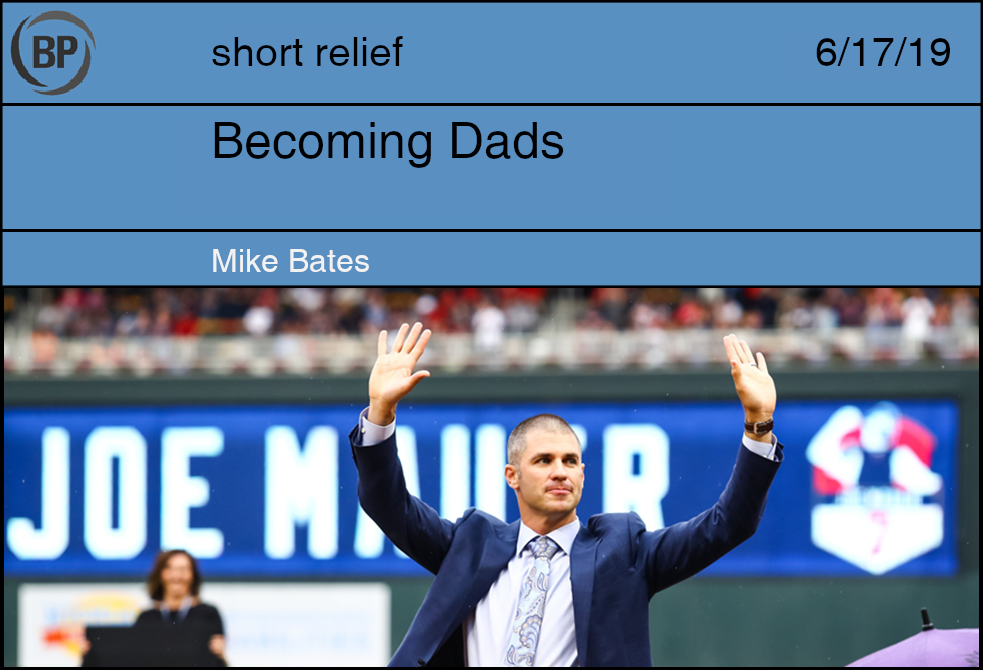 It just keeps going. I keep getting older and so do my kids, even though I’ve implored it to stop. The advancement of it stands out in sharp relief over Father’s Day weekend, when I gather with my family and see my nephews running around now when a year ago they couldn’t walk. When my long-haired 12 year old has decided he’s too cool for swimming and hangs out on the deck listening to something through his earbuds. When I had to stand in the kitchen next to my mom and help her make sandwiches she had trouble making herself.

It also stood in sharp relief this weekend as Joe Mauer had his number seven retired by the Twins. I’ve written about Mauer before in this space. He was the superstar Minnesota needed, even as a bunch of jackasses complained about his contract and his head injuries. Now 36, he gets to truly enjoy his wife and daughters on Father’s Day for the first time, and start to feel the same dread and creep of time that I do. Maybe that feeling finally unites us after years of our relative talent levels keeping us apart.

I wonder if that feeling is more or less acute for ballplayers. I bet they feel the passage of time more without the sharp realizations we have when we realize we’re past our prospect stages, or exiting our primes, or when finally, as I did when Fernando Rodney was released by the A’s earlier this year, realize there are no active players in the majors older than we are.

Or maybe the feeling came on Joe suddenly this weekend when he looked around at all his old buddies who had gathered to celebrate him and his legacy and wondered, “Holy hell! Who are all of these frickin’ dads?”

Getting the band back together. #MNTwins pic.twitter.com/moaQAhH0vd

I know that’s what I was wondering. 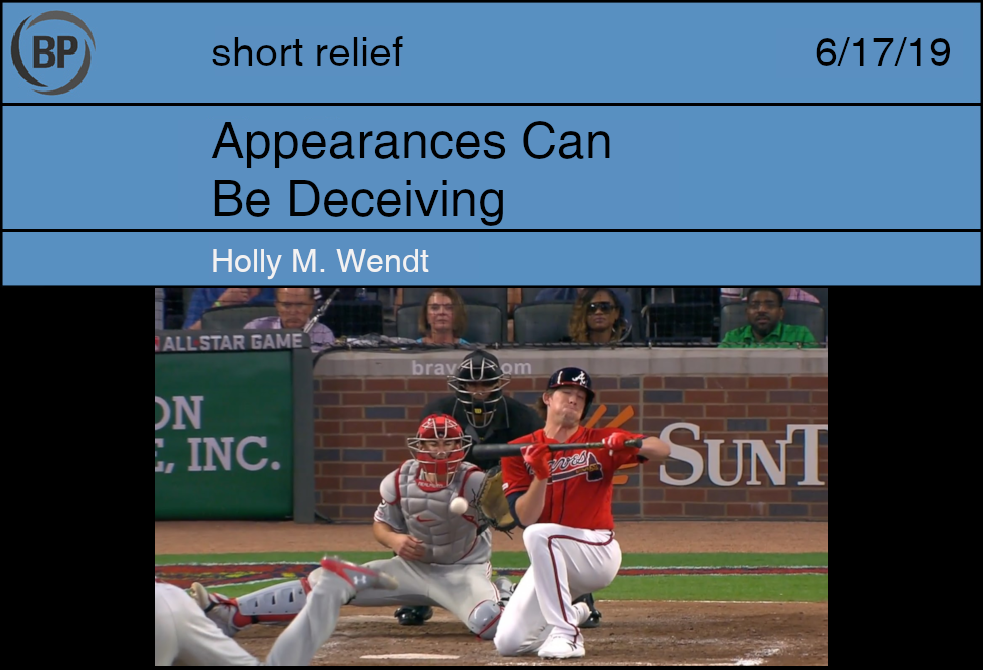 One of my favorite games to play while watching sports is to identify players by other people they resemble. For example, Phillies right-hander Jerad Eickhoff looks not unlike Christian Bale. A budget Batman, if you will. And in a baseball-to-baseball comparison that’s surely documented elsewhere, Kyle Schwarber bears an uncanny resemblance to former Phillie journeyman Joe Blanton. A particular pleasure arises, too, when encountering a face that is so clearly a blend of two well-known faces.

To wit: in the bottom of the fifth inning of Friday’s Phillies-Braves game, Atlanta reliever Dan Winkler stepped to the plate, and the uncommon occurrence of a plate appearance offered a perfect opportunity to contemplate the precise blend of Hugh Grant and John Elway’s features that make up his face. Like matching pigment use and brush-stroke tendencies in an unlabeled painting to the brain’s knowledge of an artist or movement, it’s an exercise in memory and attention to detail that I enjoy as much as trying to find names for shades in the grass’s verdant gradations, the ruck and rake of the dirt. It’s a frivolous delight.

And in the bottom of the fifth, the Phillies up 5-1, it seemed like a perfect time to indulge in the activity. With Ozzie Albies on first and Atlanta looking to get back into the game, too, Winkler’s at bat came with expectations: the circumstances demanded a sacrifice. Winkler went to it gamely, too, offering and pulling back from the called first strike with a broad, exceedingly toothy grin. Following a pickoff attempt at first and a bunt attempt that connected but launched the ball back over the netting, he settled in with one strike remaining in this, his second career plate appearance. With clear purpose, bat held at the ready, Winkler awaited the pitch with the good-natured-yet-trepidatious aplomb of Hugh Grant approaching any given rom-com’s emotional climax. And, with that purpose, Winkler simply bent with Pivetta’s knuckle curve, collapsing at the knees while still attempting to put the barrel on the ball. Eyes closed, face wisely averted, Winkler managed to knock the bunt into fair territory. He gangled toward first and was thrown out, but he’d succeeded: Albies arrived safely at second.

Two pitches and zero Atlanta runs later, Nick Pivetta returned to the dugout. As innings for the away team go, it was a pretty delightful one. Some entertaining things happened—entertaining in multiple ways—and the projected win percentage for the Phillies crept ever upward. Somewhere in the seventh, I fell asleep, lulled by the passing resemblance of this game to a better one.