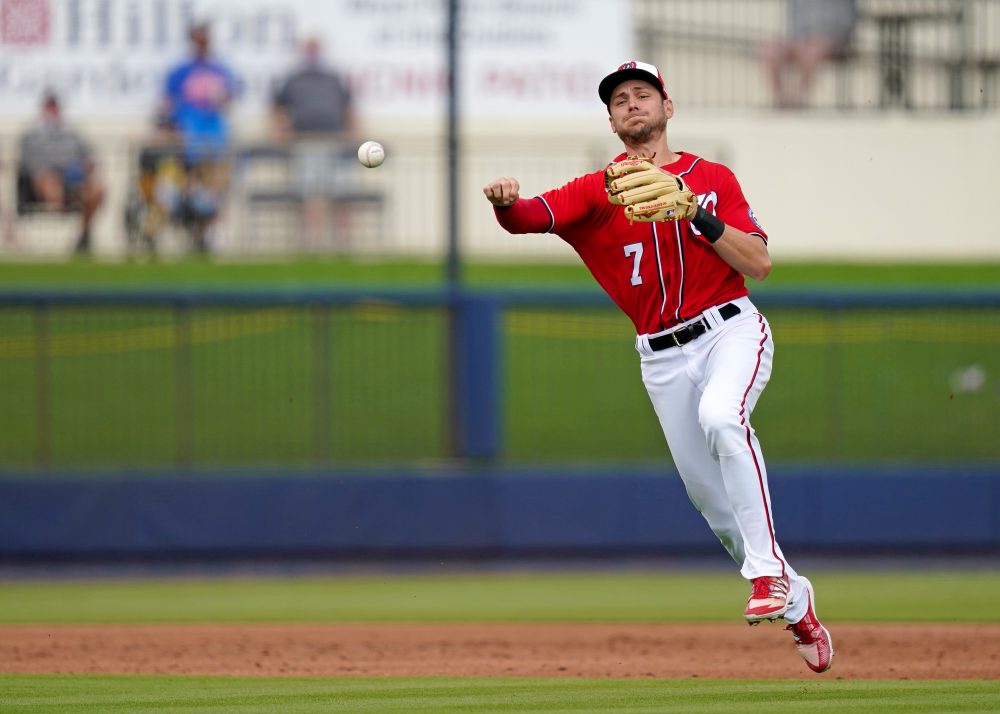 At 10:00 p.m. EDT on March 20th, I took Carter Kieboom as my final reserve pick in the Tout Wars Mixed Auction. Just a thrilling way to start a recap. A former solid top prospect who has failed to capitalize on either of his major-league stints to date and is on the verge of finding himself in the minors on Opening Day if he doesn’t show something before spring training ends.

You can tell a lot about an auction by the way it ends. Let’s see if you can put the pieces together before we get to the first round.

Okay, maybe you can’t tell much about the beginning of an auction by the reserve picks, but they do shine a little light on my active roster’s strengths and weaknesses. Here were my six reserve picks:

Let’s start with the obvious: Taking three pitchers who are start-worthy in reserves means that I have many question marks on my pitching staff. That is both correct and by design. I mentioned this in my AL LABR writeup, but it’s far more true in a mixed league: Outside of a handful of truly elite starters, pitching points will be racked up this year less by quality and more by quantity than we’re accustomed to seeing. This is the same reason why I tend to avoid most of the expensive but not elite starters that are going in the second, third and fourth rounds this year.

The selection of India as my third reserve pick, who seems more likely to win a job than not at this point, means that I needed reinforcements at a middle infield position. There’s not a whole lot to read into my Adell and Kieboom picks, other than the fact that I still believe in both of them and think they can be $10 players in whatever playing time they happen to get.

You can’t have fear when it comes to mixed-league auctions. Fear leads to regret. Regret leads to bad decision-making. And bad decision-making leads to poor team management. This is another good reason to lay out your bid limits or auction values ahead of time. When you see the players that should be available to you for a dollar or two at the end of the auction, it should make you feel more comfortable spending money early.

I had a busy endgame, which happens when you’re left with $14 remaining for your final 13 roster spots. The strategy becomes easy at that point: Identify some of the players you want, and wait until other owners fill up their roster spots with players you don’t. This is how you end up getting a bunch of players who you have valued at $3-6 in your dollar spots. For about 90 minutes, I nominated players who I knew wouldn’t go for less than $3 just to allow displacement to play out, and it’s happening even more than usual this year. Here’s how it played out for me, comparing how much I paid to how much value the players had in my bid limits:

But how did we get here? Again, let’s move all the way back to 7:13 p.m. EDT, a full 110 minutes before I started my endgame spending spree.

How We Got Here

If you do the reverse math, you can see that I had rostered only two pitchers up to the point where I spent most of my remaining cash. I rarely get myself into a spot where there’s a player on the board that I “need” to have, but Urquidy came close. I love him for this year at his usual price. I have him valued as a $15 pitcher, and without Eno Sarris in the league, I knew that I might actually get him. I refused to go past $9 because I couldn’t physically go to $11, and I wanted to leave myself one hammer at the end. I got lucky.

Yes, his prime was long ago, but in an on-base percentage league, he made for a great investment before dipping down to the bottom of the pool with likely sinkers in the category. PECOTA has him projected for a .377 OBP and 19 homers. If he does that, I’ll be thrilled.

The catcher. A day before we convened for the Tout Wars auction, Dave Roberts made a comment to a group of reporters that probably spooked a lot of fantasy players about his playing time. The fact remains that on a per-game basis, no catcher comes close to Smith’s value in an OBP league. This price is likely to be a bargain, even if he just plays 80 games. Anything more is a bonus. I had him valued at $24.

I didn’t love the price on this one, but it was fair. Plus, there weren’t any other top-tier closers left. I knew heading into the auction that I wanted to get one because things get dicey with the $6-10 bunch, and I value Pressly as a top-three closer in baseball this year. With the others all going for $20-plus, there was still value to be had, but I don’t play as close to the vest in a mixed as I do in a mono league for obvious reasons. Get your values, but make sure you also get what you need. Mixed leagues aren’t won by sitting back and being patient.

At this point in the auction, I had figured that my big-dollar names were behind me. This was not because I wasn’t willing to spend for players that I thought were worth the price, but because there was a fair amount of money still left in the room and this is when the few best remaining players on the board are fought over. A few days later, I still can’t believe that no one bid $29 on Bregman. In an OBP league, he’s tremendous. I had him valued at $37. This kind of value for this kind of player is something you look at and say, “Yes, please bring me the dollar days.”

The two best catchers in fantasy leagues are mine this year for a combined $33. It’s become too posh to fade backstops lately.

While the end of the bidding on Bregman shocked me, I spent the most time thinking about this price once the auction finished. In my opinion, a healthy Álvarez is easily a $30 player, and we’re talking about a mixed league where replacement level is still starting quality. I was ready to get pretty close to my $25 bid on him, and I got nowhere near it. I don’t care if he ends up with eligibility somewhere, and neither does PECOTA, which projects him for a .376 OBP and 34 homers in just 465 plate appearances. Maybe there’s just something in the water this year that is causing Astros to be undervalued.

As philosopher and baseball enthusiast Craig Finn once said, “I like to party on the problem blocks. And I can’t stand it when the banging stops.”

So Where Did Your Money Go, Bret?

If I’m going to spend big money on a hitter, I want one of the best and want him to provide the speed that I need to compete. If I’m going to spend money on a starter, it want one of the elites. Both Turner and deGrom were good values—a few dollars off my prices heading into the auction. Betts was a rip-roaring steal. He and Mike Trout were the two highest-valued players I had heading into the auction, each at $53, and while the latter went for the reasonable price of $51 (a number I might have trumped if he hadn’t come out after I had already spent $136), the former is a five-category stud and as reliable as they come. Betts has a .405 OBP over the last three seasons with a homer every 4.4 games and a steal every 6.1 games. In other words, he’s really damn good.

Both Turner and deGrom make for great targets in 2021 because they can do what a decreasing number of players can, and that’s becoming increasingly important at the top of drafts and auctions. We know about the diminishing number of stolen bases across Major League Baseball, but they don’t count any less in our game. It’s why we still fawn over Adalberto Mondesí. Then, there’s the lack of true aces with full starting-pitcher workloads/strikeouts. There may not be a single pitcher who gets to 200 innings or 250 strikeouts this year, but if someone will do it, deGrom has a great shot of being that pitcher.

This was always where the recap was going to end up. Here’s the final team:

It’s a pretty split, but I won’t pretend that I meant it. With that, we’re off to the races, as I attempt to bring home my third Tout Wars title since I was first invited back in 2015. I’ll need to hit a few doubles or triples on the waiver wire and avoid major injury to my stars, but I feel good about how this team ended up. We’ll see in September whether that feeling was warranted.

You need to be logged in to comment. Login or Subscribe
Jon Crate
According to PECOTA, Pivetta isn't a bad take. I've said before that I'm looking to get him for next to nothing this year. He's projected to basically not hurt you too much. If I can get an ERA of 4.00 and 150 innings I'd be very pleased.
Reply to Jon
Sharky
Very helpful recap, Bret. Enjoyed the reverse chronology and the insights the recap afforded. Good luck!
Reply to Sharky