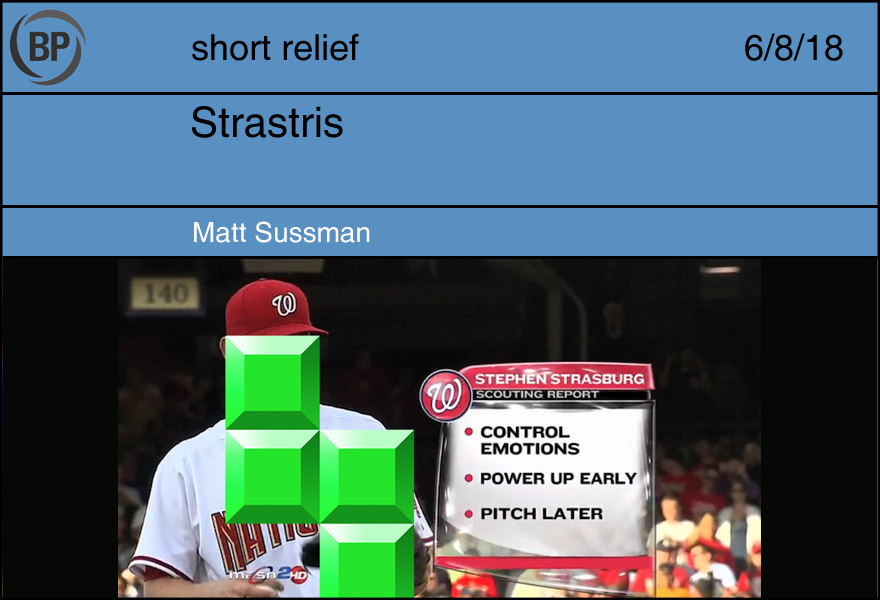 Recently my wife asked me how Stephen Strasburg was doing, as if we text regularly. Her memory of baseball is frozen in the late aughts-early tweens of baseball, before we were married, and while I was tweeting something after every dang plate appearance. She remembers when Strasburg starts were big deals, and it turns out eight years to the day was Strasburg’s debut in the nation’s capital, all of 21 years old, one year after being the first overall draft pick. Against the Pirates he struck out 14, what I guess you would call major leaguers, in a 5-2 victory. On that same day in history, Giancarlo “Mike” Stanton made his debut, and an 18-year-old Mike Trout had a walk in four plate appearances with a run scored for Low-A Cedar Rapids.

I told my wife Strasburg was doing fine today, because that’s something you say after you haven’t texted them in a while and honestly didn’t know the answer. Mind you, that’s only because it’s a fact nobody pays attentions to the Nationals until the NLCS. Of course, he has been quite good for the last eight years, scattered with injuries, but we don’t think about him anymore when rattling off pitchers we want to see. We’ve seen him. We get it.

As a pitcher, once you get past the excitement, you’re just in a groove. Clayton Kershaw, for example, never had that electricity around his starts, mostly because in that same time span he had a more exciting outfielder that would run through a brick wall to make a catch then overthrow a different brick wall to make the double play. But he’s had it figured out for years.

PlayStation recently released a trailer for a new Tetris game, the best video game franchise of all time. It’s a boring and safe pick, but it’s timeless. Non-gamers have all had a run-in with Tetris at some point in their life. It was the original Russian meddling campaign. I’ve never once been excited for a game of Tetris, but large swaths of my life have been spent rotating ‘dem Tetrominos furiously, nervously and ultimately losing. You can’t beat Tetris. No matter how well you do, at some point the matrix fills up and you power off. But that trailer, oh man, it really made me want to play that game.

Strasburg (and since then, Justin Verlander, Jake Arrieta, R.A. Dickey, pre-problematic Aroldis Chapman) was appointment viewing briefly before just settling into what they became — a “whatever happened to” story, even though the postscript is still incredible. And in Strasburg’s case, he’s already a “on this day in baseball history” story all the while deep in progress of his own masterful puzzle playing. 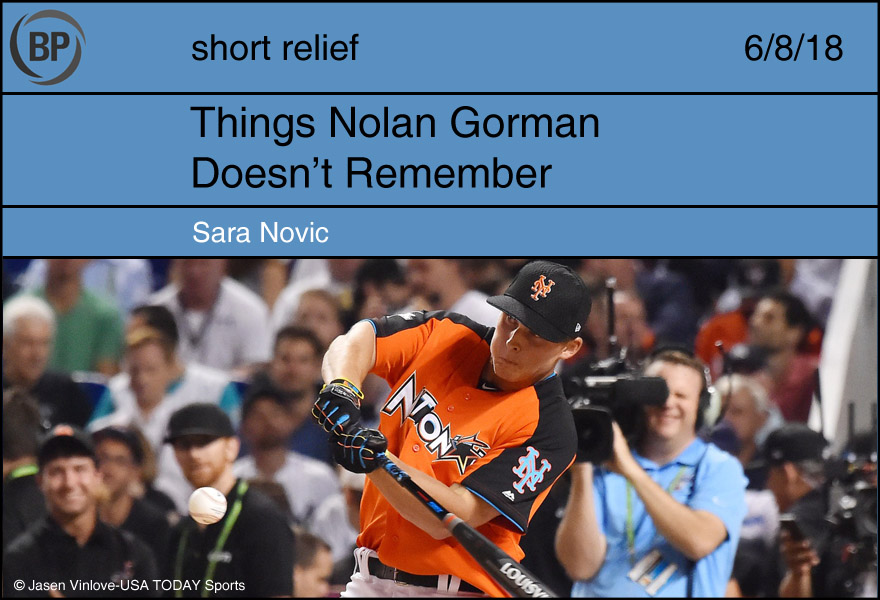 This week, St. Louis’s first-round draft pick was 18-year-old Nolan Gorman out of Sandra Day O’Connor High School. The lefty third-baseman is by all accounts a powerhouse, including having been last year’s All-American Home Run Derby champ. He’s also the first ever MLB draft pick with a 21st century birthdate: Gorman was born May 10, 2000.

Gorman and his generation of ballplayers may have their strength, their youthful optimism, and their eyesight, but they don’t have everything—namely, knowledge of a life untethered from technology. Some possible skillsets in which the 19th overall pick might be lacking:

Getting Lost. It’s possible Nolan Gorman has never been lost, or at least, has always been considerably less lost than those of us who existed before cell phones or Google Maps. Remember MapQuest? The step-by-step directions you could print out (at the library) and that seemed like a good idea at the time, but were rendered instantly useless when you inevitably took that wrong turn? Infuriating, certainly, but probably good for one’s problem solving skills, and for forcing us to interact with the world around us.

Origami. Growing up, my classmates’ lives seemingly revolved around paper. Not only the notebooks and workbooks and textbooks we needed for our assignments, but the notes we passed, the paper footballs, cootie catchers, airplanes, and MASH gameboards. In 5th grade, I learned to weaponize a mechanical pencil by taking it apart and reconfiguring the spring to make a paper ball cannon. And I always read voraciously for pleasure. I don’t know for sure that kids have kicked MASH to the curb (editor’s note: they haven’t, but now they use an app), but paper certainly seems harder to come by in the “smart classroom,” and I imagine this generation has created digital ways to amuse themselves accordingly. We do have stats, albeit dismal, on that “reading for fun” thing, though: according to NPR, half of surveyed 17-year-olds say they read for pleasure only about once a year.

It’s a brave new world out there. And in many ways, the MLB needs the push they get from younger players who won’t stand for kiss cam homophobia, or misogynist hazing tactics. But luckily for Gorman, and all of us, when it comes down to the game, baseball has remained steadfast even as rapid socio-cultural and technological change swirls around us (#nopitchclocks). Best of luck to the new players of one of America’s oldest pastimes. Can’t wait to see what you do on Instagram.

On the original gameboy, if you play Tetris on the highest difficulty level, with the max number of stray blocks lying around at the start, and you clear enough levels (maybe as few as 25?), the game ends and you are treated to a video of a space shuttle taking off.

Seen it with my own eyes. Didn't do very well that semester
Reply to gobobbygo