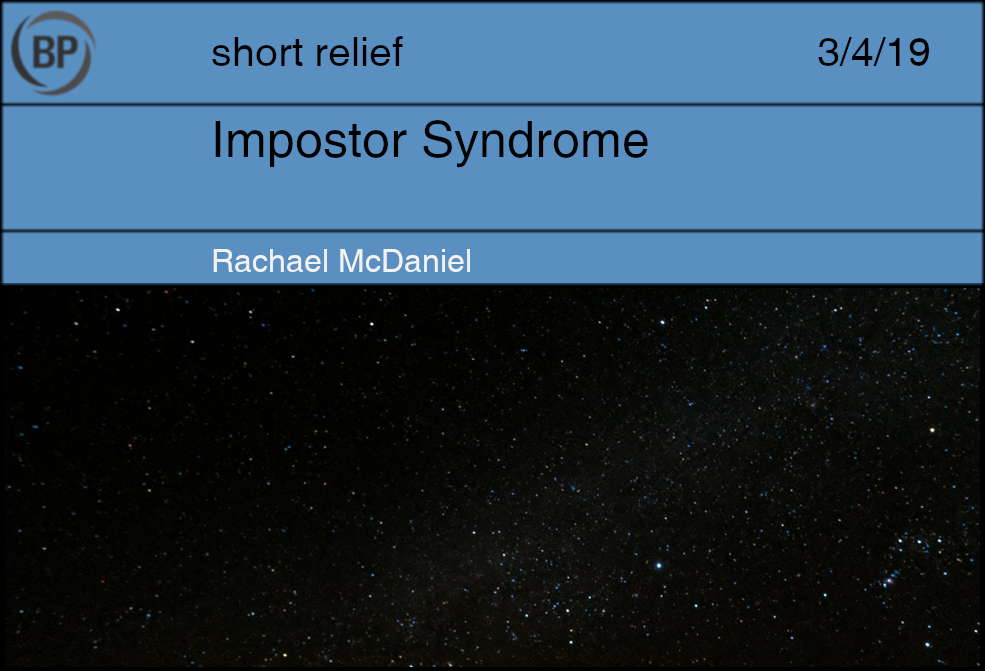 When you were a kid, you thought you’d be an astronaut. You could think of nothing else. You borrowed all of those books from the library, memorized the constellations, begged for a telescope for Christmas, and then for your birthday, and then for the Christmas after that, at which point you finally gave up. As you got a little older, the pieces of the plan started falling into place in your head. You would get this degree, and this degree, and that would take you straight to NASA. And from there — the stars. Different planets, different worlds. Things never seen.

But your astronaut fantasy never got as far as you actually being in space. You were always earthbound, trapped within the scope of what you knew. You never saw yourself in the stars. You could only imagine yourself as you were, small and distant, looking up from far away.

When you wake up in the afternoons now, you see the blank ceiling of your childhood bedroom. You were never smart enough to become an astronaut. You got your useless degree, you got the student debt you’ll never pay off, and now you’re back at home. You lie in bed for hours before you get up. This is your life: the sounds of the boiler room chugging beneath you, the slow drip of a never-fixed faucet.

Sometimes, in the evening before she goes to bed, your mom knocks on the door and tells you that the stars are out, or that there’s some kind of special moon, or that it’s just a beautiful night. She always sounds kind of hopeful. You hate that. When she leaves, you keep the blinds closed.

Your friend convinces you to go for a walk one night. He’s waiting for you at the park where you used to drink in high school, the baseball diamond with its dugouts full of empty beer cans. You never played any sports, because you knew you would be bad at them. But you sat in that dugout a lot.

You walk without seeing anything. Everything is so familiar that the environment is just assumed, filling itself in around you. You blink, and you’re already almost there. You can see the figure of your friend, standing in the field. You hop the fence onto the grass.

Something hits you hard on the arm, and suddenly, everything is sharp.

Your friend, far away, is laughing. On the ground beside you lies the projectile that hit you. You pick it up. It’s a dirty old baseball. The seams are fraying, and the leather is peeling. You take a deep breath. With all the force you can muster, you hurl the ball back at him. It sails high in the air.

And you can see it flying. And you can see the stars around it, and the darkness behind them, and the invisible lines connecting it all that you’ve never managed to forget. There’s Orion. There’s the North Star. They’re billions of years old, and they sparkle like they’re new.

The ball lands in your friend’s hands. “Not bad!” he calls. “I didn’t think you had it in you.”

You take a deep breath in again. You feel the pain shooting where you got hit, and the dirt from the ball in your fingernails. You look up at the sky, on purpose this time, and when you blink, the stars are still there.

When he throws the ball back to you, you catch it. 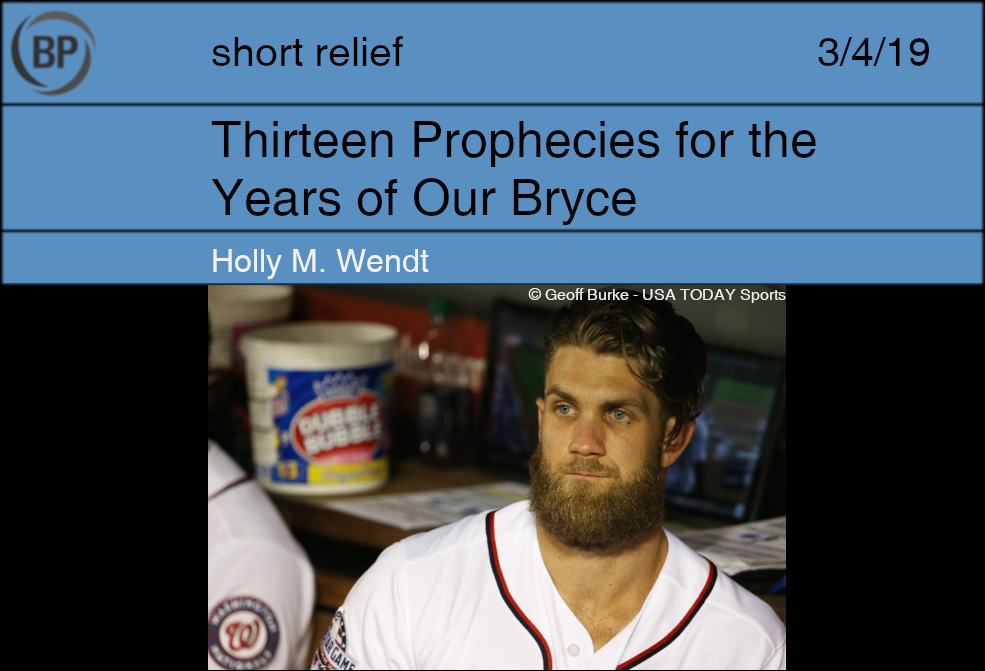 In the Year of Our Bryce 2019, no fewer than twenty-seven eagles will be seen flying over Citizens Bank Park or perching at various times on light fixtures. Seventeen will be bald eagles, six will be golden eagles, three will be harpy eagles and one will be an inquisitive ossifrage, which is not really an eagle, but serves similar functions in portents in The Odyssey. The eagles are simply excited to watch some baseball.

In the Year of Our Bryce 2020, the Philadelphia Phillies will set a team record for number of haircuts in a season, but no one’s hair will become shorter.

In the Year of Our Bryce 2021, small flecks of gold will be found in the infield dirt. Skeptics will say it’s only mica. They will be wrong.

In the Year of Our Bryce 2022, a whirlpool will form in each vat of molten Cheez Wiz in Citizens Bank Park. Four ladles will be pulled into the yellowy depths, but two ladles will be spat back out, much to the startlement of a ballpark employee. They will not be the ladles lost from her stand.

In the Year of Our Bryce 2023, the Phillies will adopt a clubhouse pet. Despite widely held belief that the thylacine has been extinct for decades, Pretzel is well-liked and uses her pouch to store bubble gum (which she’ll trade for beef jerky) and occasionally a purloined batting glove. Pretzel appreciates Dollar Dog Nights and the fact that the Phillies organization now believes that anything is possible. She prefers sleeping in Mike Trout’s locker.

In the Year of Our Bryce 2024, someone will wonder what happened to all of the squirrels. None have been seen at a Phillies game at home or on the road since 2018.

In the Year of Our Bryce 2025, the Phillies win their fourth World Series since 2008. Their outfield sweeps the season’s awards. When Matt Klentak is asked about the organization’s team-building strategies for the year, he will look into the distance and say, “With Silver Sluggers you may conquer the world.”

In the Year of Our Bryce 2026, there will be no rain delays.

In the Year of Our Bryce 2027, the Phillies will replace the greenery in center field with a small desert-scape. The cacti will bloom year-round, and one saguaro will look insistently like a hand flipping the bird no matter how many times the grounds crew replace it.

In the Year of Our Bryce 2028, one member of the Phillies bullpen will be a former Cirque de Soleil aerialist.

In the Year of Our Bryce 2029, someone will ask a clown question during a postgame scrum. The Lehigh River will flow north for twelve minutes.

In the Year of Our Bryce 2030, a team of thirteen children named Bryce, all hailing from New Centralia, Pennsylvania, will win the Little League World Series. The team’s best pitcher will be ambidextrous, and the shortstop will wear her eye-black in vertical stripes.

In the Year of Our Bryce 2031, we will all look back, but only through a glass, darkly. 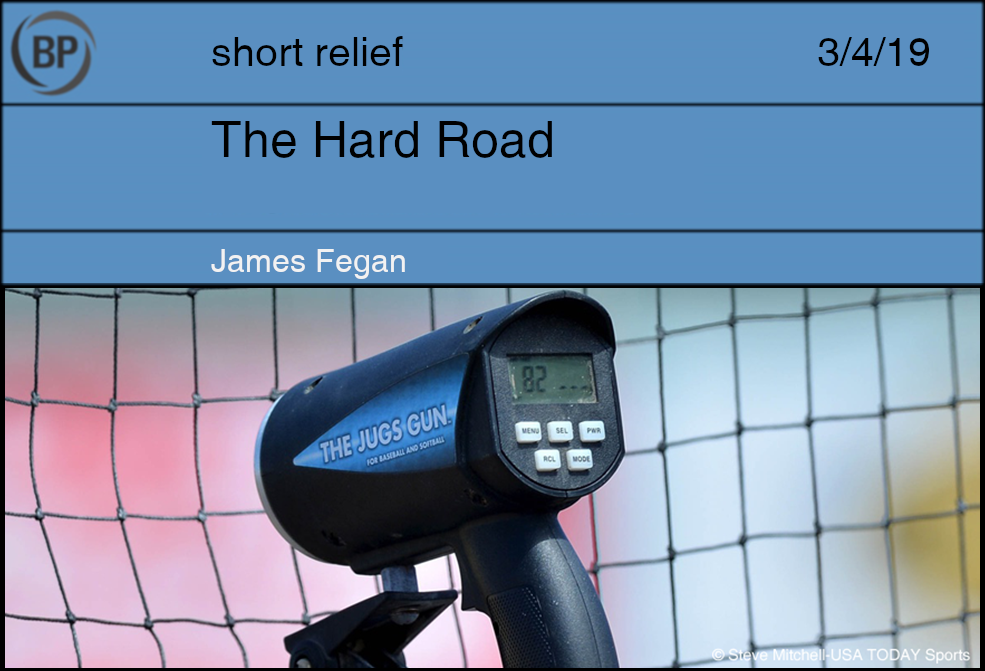 I follow far too many scouts and coaches on Twitter, but everyone is going to war over this one high school kid maxing out at a showcase event.

It’s better said that everyone is living out the James Baldwin quote about the garden of Eden, about this one kid throwing as hard as he can, trying to get noticed a little bit and hopefully get signed before the world ends.

The little league and high school coaches, the armchair mechanical experts, the aspiring scouts who lament the lack of landing in fielding position, who fret about the potential for injury, who sense the prevailing indication that layers and tact of nuance have been stripped away in favor of the straight line purpose of maxing out velocity, remember the garden. Or at least, they have a memory of it, and whether it actually existed is ultimately irrelevant. We can create our own memories if we want to badly enough.

Their Eden is a time where viability in baseball could not be so simply quantified and objectively measured, not for hatred of quantification nor measurements, but hatred of perceived simplicity. A game decided by a never-ending series of ineffable qualities and accumulated knowledge, is something multifaceted and nuanced and worth dedicating your life to understanding. A game as hard and unforgiving as baseball, with simple realities driving them all, might just be cruel.

The pitching coordinator/baseball data hounds/Pitching With Intent twitter has forgotten the Garden, or may be granted clarity in focus by it never existing. They have found virtue in being constantly prepared for the world defined by the flaming sword, and that maintaining a level of preparation suitable for survival is so demanding and all-encompassing so as to be its own craft. They may be better armed in the battle against physical and objectively measured deterioration, if for no other reason than their clarity that it is the true enemy. They are better able to map out a plan for survival and even happiness, they may even court the hope of building a new Eden of their own making, out of pursuit of a new horizon rather than the lament for a long past sunset.

And yet, they are still arguing about this one kid trying to throw hard on Twitter, so wherever their road leads, it is not to peace.