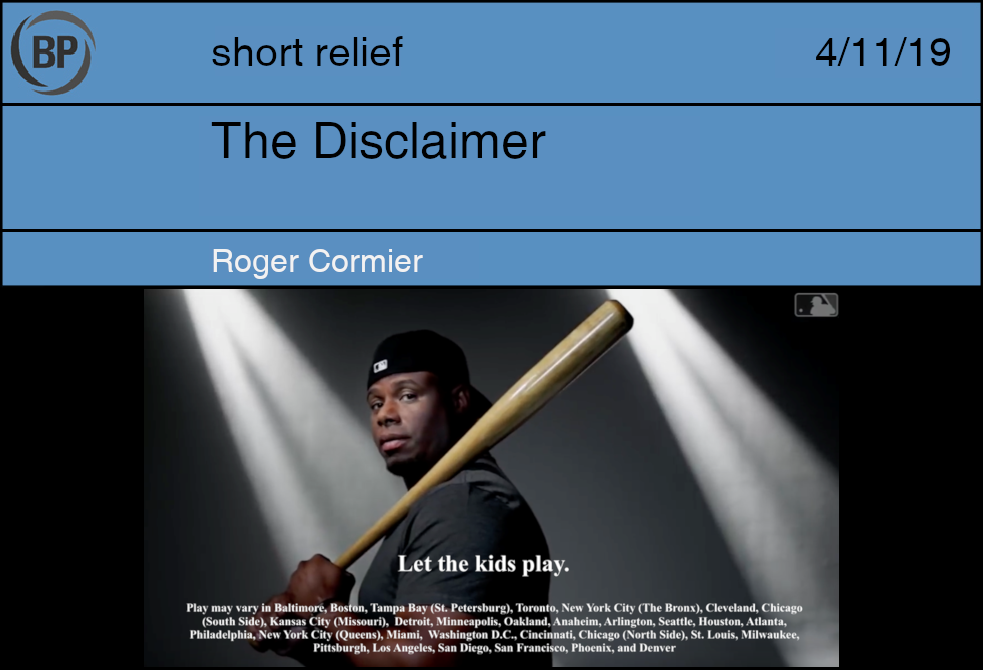 “People, we are deep down in the gutter drain,” Loveless began after a long swig of warm water. “We got to get in front of this drain…” A second gulp. “Fast before we sink. It turns out we lied.”

“Lied? So what?” Bernard Gilkey was not long for the advertising world, Loveless and everyone else in the room decided at that very moment.

“We lied in a commercial.”

“I told you this would happen if we didn’t involve La Tortuga!” Lucille Nickelmany insisted.

“You al-,” Gillian Nancy began before static interrupted her from Norway. “-ay that.”

Loveless explained the situation. Major League Baseball explained they wanted players to celebrate their feats of strength and moments of personal glory, like any human being should in a free society. “Players were taught not to display too much emotion. That it was rude. That pitchers would retaliate for such behavior. The unwritten rules may not be written in ink, but the scars from breaking them hurt like getting smacked by a stone. We were told this would change. Fun was no longer outlawed.”

Not a dry eye in the room. Not even from the various paramedics tending to the wounded.

“Then over the weekend, Chris Archer threw at Derek Dietrich. Why? Because Dietrich hit a ball a really long way. Landed in a body of water. Dietrich looked at it for awhile. Poor young man had probably never realized his own strength until that very moment. His reward? Archer throwing behind him his next time up. Archer got a five game suspension, so he, what, misses his next start by one day if at all?

The only sound in the room for the next 20 minutes was Gilkey getting up, leaving the room, closing the door, having a private conversation with his spouse from his nearby cubicle, packing his three possessions, and huffing it out of there.

“The KBO is so fun. Bat flips are an art form.”

One paramedic took Gilkey’s vacated seat at the table. She cleared her throat before speaking.

“How about a disclaimer?”

Rob Manfred rubbed his hand against his left eye longer than medically recommended.

“I know I’m old. I get that. That being said, this has to be the dumbest update to MLB The Show I have ever been pitched.” 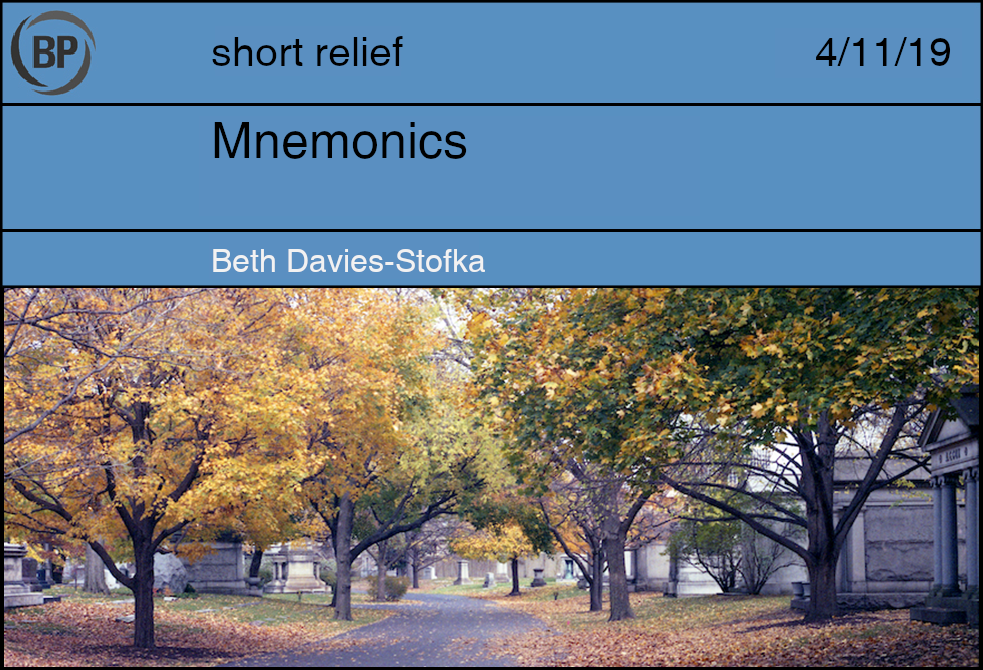 “Are you seriously going to watch this entire game?” Ryan watched as his wife reviewed the records of the two teams. “Ball games in April are a lot of fun,” Lucinda replied, “crazy mistakes and all.” “Do you have to watch the White Sox, though?” Ryan asked. “Even the South Side doesn’t watch the White Sox.” “Fans always turn up for their teams,” Lucinda said. “Guaranteed Rate Field is pretty empty, I know, but the faithful are out there. How about that old man with the beard? If it weren’t for him, that whole section would be empty.” “Father Time in glasses and a ball cap,” Ryan agreed. “Lots of kids there, too. Maybe this will be fun after all.”

“Naps are one way to get through this ordeal of a game,” Ryan observed, after Lucinda woke up for the second time. “Or is this game so boring that you can listen in your sleep?” “Pfft,” Lucinda retorted, but she sat up straight, smoothing her hair and trying to look alert. “Quiz: how many home runs so far?” Ryan asked. Reviewing the box score, Lucinda exclaimed, “Rays have scored five runs already? Santana gave up three homers already? Tell me that the Sox put some pressure on Charlie Morton!” “Unfortunately, no,” Ryan said. “Very lopsided game. What we need is offense. Yoan Moncada’s up.”

They compare notes. “Yolmer Sánchez got a hit,” Ryan noted. “That will help him relax. Palka and Moncada look like they’re trying to hit their way out of the grave and it can’t be much fun for them.” “Love Tim Anderson, though,” Lucinda said. “He looks like he’s having fun. Dancing around the way he does, he looks great even when it looks like it’s his first time playing ball.” The two share a laugh.

“Alright sweetie,” Ryan said, “we just spent a beautiful spring day sitting on the couch for four hours. You want to go for a walk?” Lucinda smiled and nodded. Reaching for her walker, she stood slowly and carefully until she was balanced over the handlebars. Then, tucking Ryan’s photo into the seat, she walked slowly out into the sun. 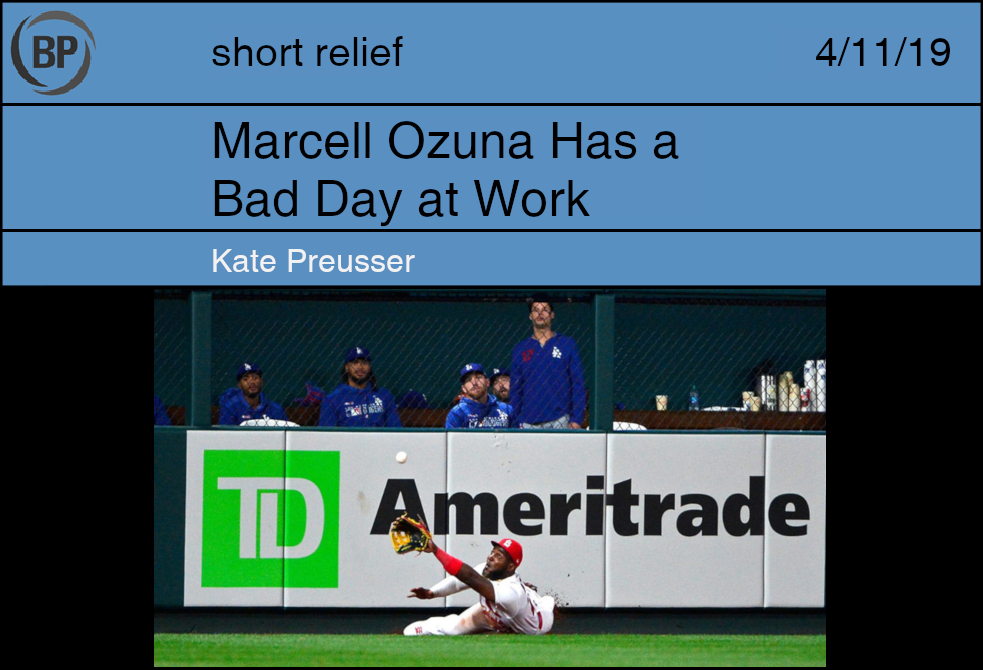 This past Tuesday, Marcell Ozuna made a significant misjudgment at work.

Missed it by that much. pic.twitter.com/yQs026Axee

The ball was hit by a Dodger, in this case Enrique Hernández, a team known for hitting the ball very high and very far, usually out of the ballpark. Kiké is, at this point in the very young season, slugging .730. This ball was hit at a launch angle of 37 degrees, which is, for those unfamiliar, extremely high. So it would follow that Marcell Ozuna saw the ball coming hard off Hernandez’s bat, did as many of us do and made some assumptions, and went back to the wall to await the hero badge to be pinned to his chest: 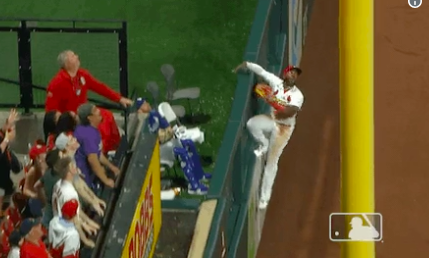 Look how high all these little faces are craned up! They look like a chorus of ballpark angels, or the houseplant your co-worker gave you that you have failed to take home (take it home, plants are not made to live on fluorescent light alone). They are expecting to either catch the ball, or to watch Marcell Ozuna make a thrilling catch. Either way, they will be happy.

Sometimes, at work, you think you see a big obstacle coming down the pipeline, and decide to take decisive action to nip it in the bud before it can ever be a problem. You stay late in your office, working on your solution, imagining how it will be when everyone else sees the problem you’ve already sussed out and panics momentarily, how you will be able to stand up and say “actually,” and everyone will have a moment of relief, courtesy of you. They’re always telling you to take more initiative at work, and here you found this opportunity, and it will benefit everyone, although of course it will also come with some degree of heroism, for you, the hero. 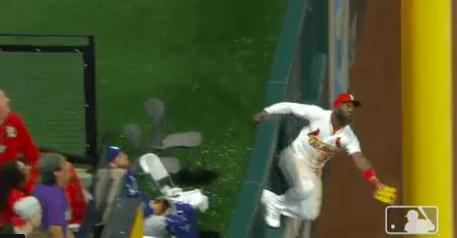 About here, Ozuna starts to realize the ball is not, despite being hit at an astronomically high angle, going to leave the yard. Instead, he must climb down from his perch and attempt to close the distance as quickly as possible. But he’s so high on the wall, and the ground is so far away, and the ball is yet so far. And also, his cleats get kind of tangled up there.

The problem with being a cog in the greater machine is you don’t have access to the bigger picture. The problem you patted yourself on the back for spotting has been anticipated, solved, and sorted. It’s not even on your bosses’ radar anymore. When you raise the point later in a meeting, they just look at you funny.

Meanwhile, your own work, which you have been putting off to the side in order to tackle this big, hero-making, career-making secret project, has piled up. Your bosses call you in to talk about it. You wind up staying late all next week catching up. 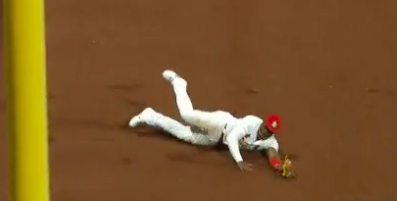 These are hard moments. They remind us of the stark gulf that exists between how we see ourselves and how others see us. Each of us is always the hero of our own stories. Going to work is, for most of us, a reminder that we’re merely background players in everyone else’s. And for every moment where you rise up and successfully grasp that brass ring like a plucky heroine who belts showtunes and owns a fantastic coat, there are many other moments where you lie face-down in the dirt in a scenario of your own making.

In those moments, make sure you have people around who will dust you off and give you a hug. We’ve all been on the wrong side of perception vs. reality at one time or another. 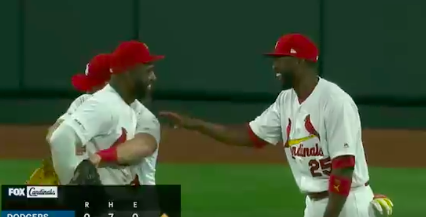