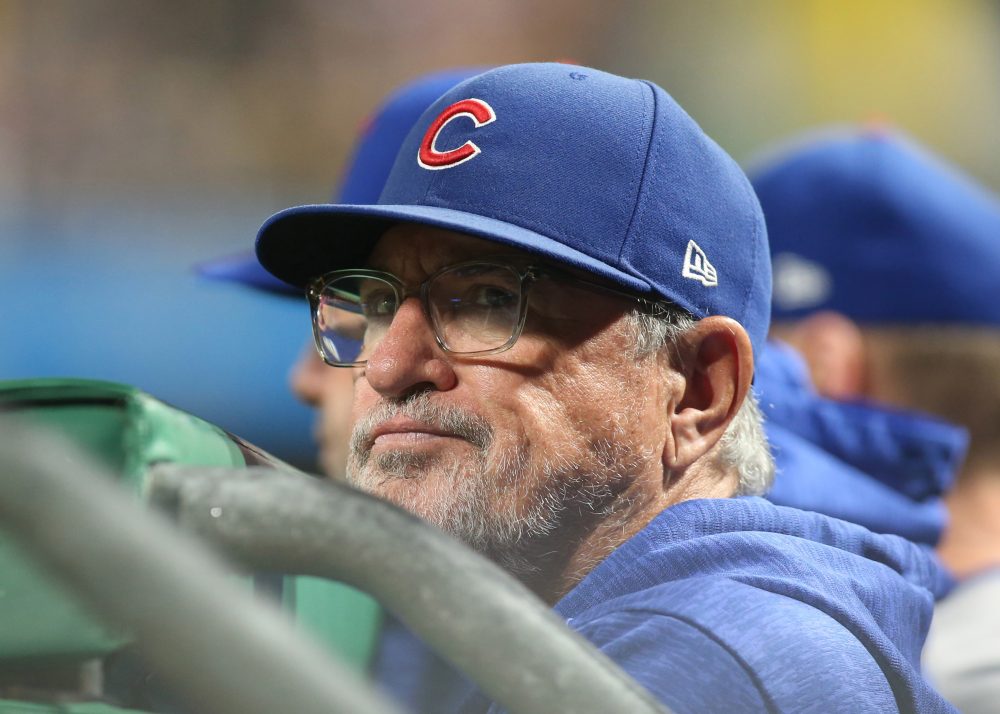 Baseball Prospectus first published PECOTA projections for players and teams in 2003. In the ensuing 16 seasons, through last year, we projected that the Pirates would win 1,202 games. The Pirates, since 2003, have, in fact, won 1,201 games. Good job, PECOTA!

So take the following graph with a grain of salt. It shows the cumulative error that PECOTA has made over its 16 seasons for all 30 franchises. A positive number indicates that PECOTA was overly optimistic, a negative number means it was overly pessimistic. Keep in mind that these totals smush together positive and negative outlier years. 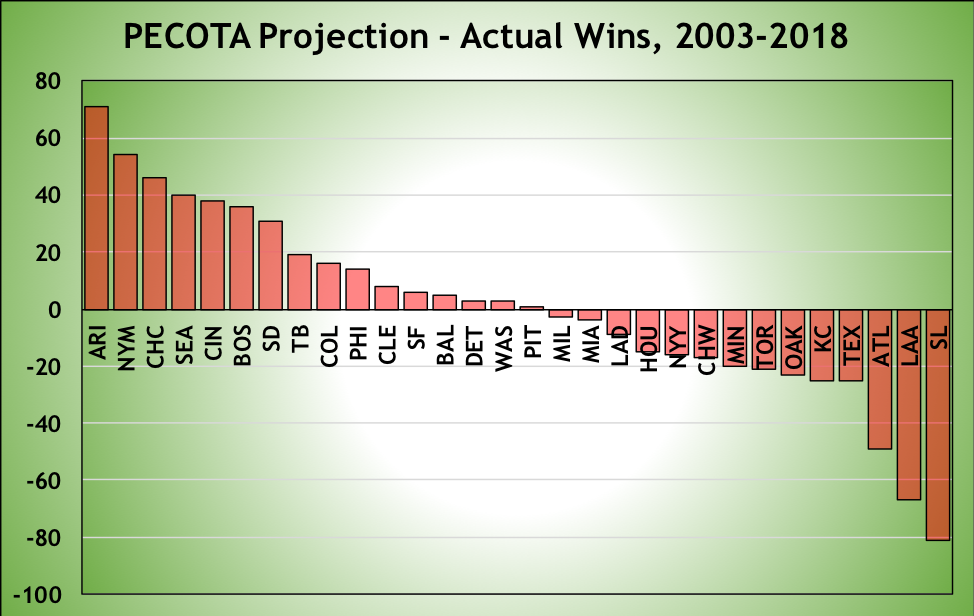 While Cardinals fans might feel aggrieved, it’s not that PECOTA projected fewer wins for their team than it should have in every season. Similarly, as recently as 2017, the Diamondbacks were hardly PECOTA’s darlings, with the system predicting 78 wins instead of a 93-win Wild Card season.

One big miss can throw off the totals when you’re talking about only 16 seasons. Show me the prediction system that didn’t miss badly with last year’s Nationals (PECOTA was six wins too high) or Athletics (PECOTA was 21 wins too low) and I’ll ask for the timestamp on that spreadsheet, if you don’t mind. Additionally, PECOTA has been updated, as have been the rosters and characteristics of the teams. So an evaluation of whether PECOTA is fair or not—whether it favors some teams over others—needs to look at just the recent past. I’ll do that for the rest of this article.

In the PECOTA loves/hates discussion, three teams have stood out. Year after year, PECOTA has been accused of loving the Rays. They play in a lousy, inaccessible ballpark and they spend less money on their major-league roster than just about anybody, but year after year, PECOTA seems to project that roster near the top of the AL East, despite all the big scary monsters along the Northeast Corridor (and in Canada). Between 2014 and 2017, PECOTA expected the Rays to win 45 more games than they actually did. That’s over 11 games per season.

And the Orioles and Royals fan bases seem perpetually aggrieved, with each year’s PECOTA projections providing bulletin-board, nobody-respects-us material for the team and its followers. As noted in this space last year, maybe PECOTA has a blind spot for teams like those two, that don’t get on base a lot or have impressive rotations but feature shutdown bullpens.

So, how did PECOTA’s most extreme biases play out last season?

That flipped the narrative, didn’t it? PECOTA missed two teams by 20 or more games in 2018: The overachieving A’s and … the underachieving Orioles. If anything, PECOTA was guilty of O’s/Royals-philia and Rays-phobia in 2018.

I’m going to concentrate on the last half-dozen years. I looked for teams for which PECOTA was wrong in one direction or the other five or more times. If we figure the odds are 50/50 that PECOTA will be high or low, the odds of PECOTA overshooting four times and undershooting twice are about 23 percent. That’s not very unusual. Going high or low five or six times, though, that’s only an 11 percent probability. Maybe there’s something going on.

I also wanted to see the magnitude of the error. If PECOTA thought a team would do worse than it actually did, but the difference was only a game or two, that’s not a big deal. To avoid getting thrown off by one big outlier, I took the median difference of the misses.

Personally, I think PECOTA is more down on the White Sox than I’d be this year. But it’s certainly been more optimistic about the club in the past six springs than what they’ve put on the field. As for the Reds, maybe PECOTA has a hard time believing a pitching staff can be that bad year after year. PECOTA has overshot the Dodgers, but not by a lot, and ironically, the year in which we got the most grief for our Dodgers projection (What? 97 wins in 2017? More than the Cubs? Are you guys nuts?), PECOTA, it turns out, was seven wins too conservative.

And here are the teams that PECOTA “hates”:

As noted, the 2018 Royals and Orioles ended PECOTA’s streak. As for the Cardinals, I’ll repeat what I said last year: PECOTA can’t account for Cardinals Devil Magic. Aledmys Diaz? Paul DeJong? Miles Mikolas? It seems that every year, St. Louis gets half a dozen or so WARP from guys you have to look up in the Annual to find out who they are. PECOTA lacks a gold-from-dross function.

OK, let’s look into this exemplar of PECOTA hatred. The case for the 82-80 Cubs, only a game ahead of Cincinnati and Pittsburgh:

I get it, we’re going to hear it from Cubs fans. But not only has PECOTA proven to be pretty accurate over the years and particularly recently, it’s also, as illustrated above, got its reasons. But take heart, Cubs faithful: Even if PECOTA’s gloom turns out to be justified, you’ll be able to bask in the warm glow of knowing your team avoided a higher payroll in 2019.

You need to be logged in to comment. Login or Subscribe
Ross Fortner
Awesome day of content, BP crew. Much appreciated.
Reply to Ross
Rob Mains
Thank you Ross. We're glad you enjoy it.
Reply to Rob
Anthony Worrall
Have to say PECOTA loves my favourite team(INDIANS), more than I do this year, a pleasant surprise:)
Reply to Anthony
Rob Mains
Anthony, I was going to say something about your apparent lack of enthusiasm for the Jordan Luplow trade, but I suppose the right thing to do would be to feel glad for your pleasant surprise.
Reply to Rob
Ross Fortner
Hey Luplow could be a post no-hype sleeper...
Reply to Ross
Rob Mains
A right-handed hitter getting out of an awful park for right-handed hitters. Then again, I've heard there's a left-handed hitting OF who's available...oh yeah, this is Cleveland.
Reply to Rob
Anthony Worrall
Stop it !! We got Baker now :)
Reply to Anthony
Jim Proulx
I think PECOTA hates my favorite team (Phillies) a bit less after today.
Reply to Jim
Rob Mains
I was on a radio spot today and was asked whether we'll update the standings after big moves. In fact, we do it every day to reflect all player moves! Check back tomorrow, Jim, to see how much more love we're giving them now.
Reply to Rob
Rob Mains
Actually, Jim, this was big enough a deal that we re-ran PECOTA just now! 86 wins for the Phightins. just three out of first.
Reply to Rob