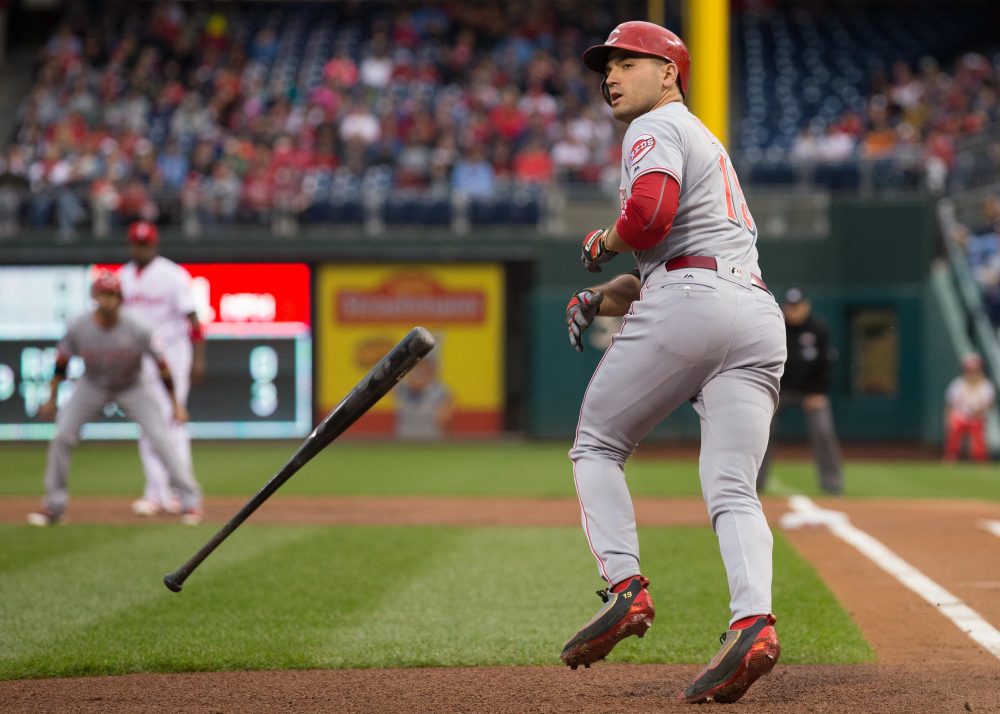 I was recently listening on the radio to a discussion of a team. I don’t recall who was speaking, or the team being discussed—hey, I was driving, couldn’t really take notes—but it concerned a meeting for pitchers before the start of a series against a club. They were going through the opponent’s batters, cataloguing their tendencies. And when they came to the other team’s best hitter, the pitching coach noted, “Don’t let him beat you.”

But if you’re playing the Red Sox and you’ve got a 4-3 lead in the ninth inning, and the three guys due up are Eduardo Nunez, Jackie Bradley, and Christian Vazquez, you’ve got a chance at getting out of the game without Mookie Betts getting to the plate. That being said, “don’t let him beat you” is the kind of thing you hear enough that you wonder whether it’s actually true. Well, you might not, but I do. So I decided to look into it.

First, I had to decide who the him in “don’t let him beat you” is. On some teams, it’s pretty obvious. Joey Votto. Paul Goldschmidt. Mike Trout. On others, though … whom on this year’s Marlins do you want to avoid? Or the Rays? Or even the Dodgers? My first thought was: There isn’t a him on every team. So I decided to limit my search to the top 15 batters—one for every two teams—in the majors for each season of the 30-team era. I based this on our True Average, or TAv.

If teams are intent on not letting those top hitters beat them, that implies they’re not going to give them good pitches to hit. In 2017, that was effectively saying, “We’ll pitch around Freddie Freeman and take our chances with Matt Kemp,” or “We’ll pitch around Tommy Pham and take our chances with Paul DeJong.” (Good lord, you’d hope that’s what they were doing.) That, in turn, implies that those 15 hims would see their walk rates spike in key situations.

I asked our amazing numbers guy, Rob McQuown, to retrieve the batting statistics for every one of the top 15 batters by TAv over the past 20 years—300 batters in all—in high-leverage situations, defined as a Leverage Index of 1.5 or greater. I compared those figures to their batting statistics in all their other plate appearances and looked for a difference.

Before I show you the results, I want to set the baseline. And that is: Major-league hitters are better in high-leverage situations than they are in other plate appearances.

And that’s exactly what occurred. In high-leverage situations, the top 15 hitters in the past 20 seasons walked in 15.87 percent of their plate appearances. In other plate appearances, they walked 12.85 percent of the time. That’s a difference of 3.02 percent. Among the 300 hitter seasons, the average difference was 2.98 percent. The median was 2.49 percent. All but 75 of the 300 walked more frequently in high-leverage situations than in others. The best hitters clearly get pitched around when the pressure’s on.

However, that “pitching around” is solely caused by intentional walks. This table summarizes walk rates for the 300 batters in our sample:

Here’s a graph showing, for top hitters, the difference between overall, intentional, and unintentional walk rates in high-leverage appearances for the past 20 years. 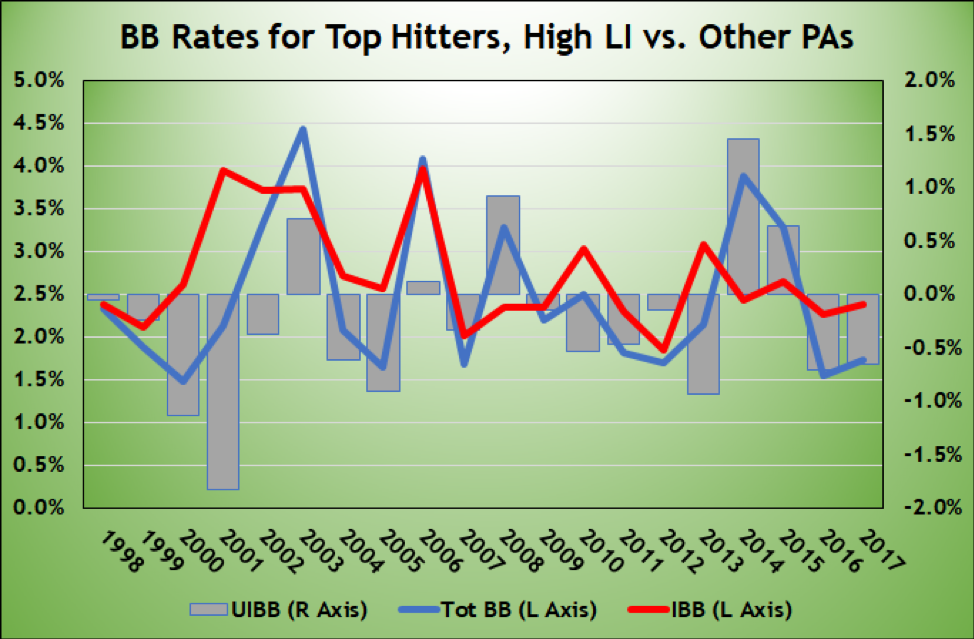 There’s a lot going on there, but the key feature for me is that those gray bars—the difference in unintentional walk rate in high-leverage plate appearances compared to other plate appearances—are negative in three-quarters of the seasons. In other words, while the best hitters consistently walk a lot more in high-leverage situations (blue line), that difference is due to them getting a lot more intentional walks (red line).

So maybe those meetings where pitchers are instructed “don’t let him beat you” are unnecessary. Because the decision is taken out of their hands. It’s the manager, waving four fingers at the home plate umpire, who’s making that call.

But I think there’s an even more important takeaway here. As noted, the best hitters typically walk less frequently in high-leverage situations than they do in other plate appearances if you strip out intentional walks. That flies in the face of those who claim some batters are “too passive” when the pressure’s on, that they should “expand the zone” by going for the key RBI instead of walking to first base. Like, say, this guy, who’s been one of the top 15 hitters in the majors in seven of the past nine seasons:

(Note: Differences do not add up due to rounding.)

Hey Reds fans (and announcers) frustrated that Joey Votto is not aggressive when the pressure’s on: You’re wrong. Despite batting in a lineup in which he’s sometimes the only legitimate threat, he takes a walk less frequently in high-leverage appearances, 14.1 percent of the time vs. 14.7 percent when the leverage isn’t high. He gets intentionally walked a ton—6.2 percent of plate appearances in high leverage, 1.2 percent otherwise—but he’s less patient and more aggressive when he’s not receiving an intentional pass in clutch at-bats.

And that’s true of his peers. All hitters walk more in high-leverage plate appearances. For the very best, though, that increase is more than 100 percent due to intentional walks. Elite hitters, when not being walked intentionally, walk less frequently when the pressure’s on. Everybody else walks more. The narrative about guys like Votto is entirely backwards. Which means either pitchers are ignoring the “don’t let him beat you” dictum, or the hims of the sport aren’t letting them follow it.

Extra thanks to Rob McQuown, who really went above and beyond pulling together the individual and overall data for this.

You need to be logged in to comment. Login or Subscribe
cmellinger
Very interesting article. Thanks
Reply to cmellinger
Rob Mains
Glad you enjoyed it. I came into it not knowing what I'd find--the results kept getting better and better and I dug into the data.
Reply to Rob
ChicagoOriole
It warms a fan's heart to know that the pitcher doesn't want to give in to the best the other guys have with the game on the line.
Reply to ChicagoOriole
Rob Mains
Yeah, isn't that cool? All sorts of stuff that came out in this research were pleasing, I thought.
Reply to Rob
will23
Perhaps the best have fewer unintentional walks in high leverage because the pitchers more prone to walking them simply issue the intentional free pass? Also, it may also be true that the pitchers who pitch in late inning high leverage situations are not the kind to walk batters, either intentionally or not. If both are true, the decline in unintentional walks would not be an indicator of the hitter's aggressiveness, but rather, as you mentioned, an implementation of the don't let the big man beat you strategy. On the other hand, the overall increase in walk rate, including the slight decline in unintentional walks, would be an even more significant testament to the respect accorded the best hitters because those walks would be handed out by the more dominant, aggressive pitchers. Lots to unfold for sure, but a very interesting look at an old chestnut.
Reply to will23
Rob Mains
Thanks. Fair point about pitchers prone to walking the best hitters getting ordered to issue the free pass. It does raise the question as to why bother saying "don't let him beat you" if the decision's going to be taken out of the pitcher's hands. As to high-leverage relievers, this is a pretty crude measure (i.e, it looks at only averages and excludes all starters), but using FanGraphs data, the 30 relievers whose LI when entering games averaged 1.5+ had a 6.9% UIBB walk rate last year. For other relievers, it was 8.0%. But to look at this correctly we'd need a PA-by-PA approach.
Reply to Rob
Rob Mains
I'd also note, with some satisfaction, that in three seasons, the rate by which Votto's UIBB rate fell was around 2x+ the difference I cited above.
Reply to Rob
Matthew Gold
It is surprising that the hitters are better in high leverage situations. You would expect that they would be facing the best pitchers in those situations -- pitchers who would do better, on average, than the pitchers who handle the low leverage situations.
Reply to Matthew
Rob Mains
Well, there are some situations that can occur in earlier innings, where the guy on the mound's a tiring starter, or in extra innings, where the pitcher may be a long reliever. (Not picking on anyone, but think of Mark Lowe giving up the bomb to Freese in the 11th inning of WS Game 6 in 2011.) But in general, yeah, there were just so many things about this project that surprised me.
Reply to Rob
juliux
Very interesting work.
I thing one of the various explanations here could be that, in High-LI situations, Good Hitters (when not intentionally walked) are more anxious or decided to swing at the ball and try to get it done by themselves because the know they're good (and maybe the best option in their teams), while less-good hitters (not to say, the really-bad ones) are expecting a saving fourth ball that takes them to first and just "let the next one do the hard job".
Thank you for the article.
Reply to juliux
Rob Mains
Thanks, Juliux. The best hitters do considerably better in high-LI PAs, so to me, that suggests that if they're pressing, they're not doing so recklessly.
Reply to Rob
MGL
I could be wrong, but I believe the only reason numbers are better in high LI situations is because it's biased by runners on base. If you control for base runners, you should get either the same numbers or lower numbers in high LI situations (because of the better pitchers). Also if IBB's are counted as BB, that would also inflate the high LI numbers.
Reply to MGL
Jim Maher
If someone is intentionally walked after a 2-0 or 3-0 count where the pitcher is being careful, is that counted here as an intentional walk or is it only if pitch 1 is part of an intentional walk? With the new system, that may be moot, but over the last 20 years it hardly is. Might that affect your conclusions?
Reply to Jim