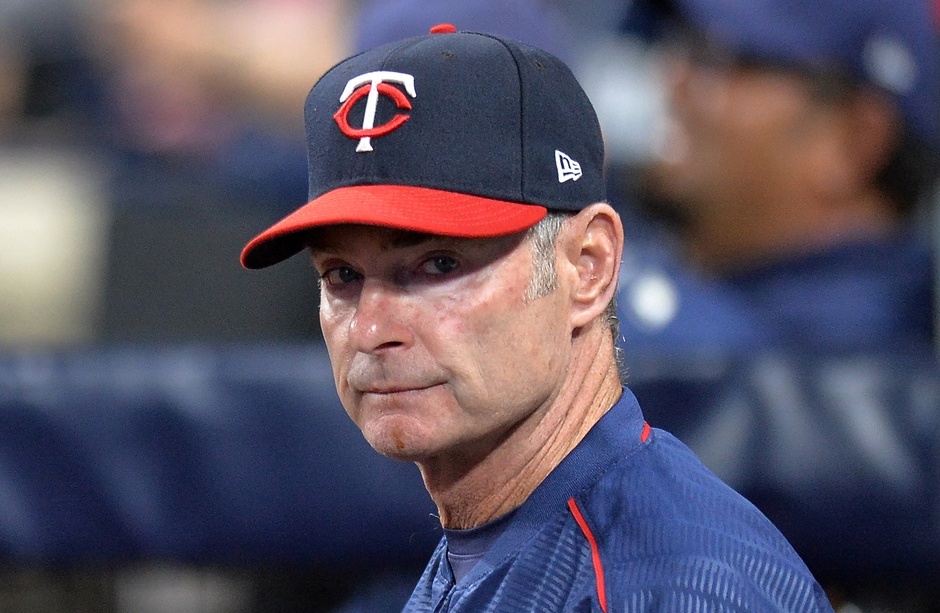 Last year at this time PECOTA was predicting a massive improvement from the Minnesota Twins, projecting them for 80 wins following a season in which they had the worst record in baseball. No projection system was higher on Minnesota than PECOTA, the most prominent Las Vegas odds-makers pegged the Twins for 72-75 wins, and the notion of the team approaching .500 seemed to shock even optimistic Minnesotans. (I thought 75 wins sounded right.) One local beat writer who shall remain nameless tweeted “huh?” in response to the 80-win projection (and then later deleted the tweet after getting grief about it in the clubhouse).

PECOTA projected the Twins to go from 59 wins to 80 wins, for an MLB-high improvement of 21 games. In reality, the Twins went from 59 wins to … 85 wins, making the playoffs as a Wild Card team just three months after making the no. 1 overall pick in the draft. Minnesota’s year-to-year improvement of 26 games was the largest in American League Central division history and one of the 10 largest by any American League team since the 162-game schedule was adopted by both leagues in 1962.

So what does PECOTA expect from the Twins as an encore? They lost zero impact players since the end of the season, and of particular note the young offensive core that drove the second-half turnaround and led the lineup to the fourth-most runs in the league remains entirely intact, with a late addition of slugger Logan Morrison coming off a 38-homer breakout year. They missed out on Yu Darvish, but made several useful additions to the pitching staff in Addison Reed, Jake Odorizzi, Fernando Rodney, and Zach Duke. Surely, if PECOTA liked the Twins so much last February, it must like them even more now, right?

Never has a nearly identical projected record in back-to-back seasons seemed so different. Whereas last year’s 80-win projection was perceived as optimistic enough to be mockable, this year’s 81-win projection is a buzzkill. Even those same odd-makers who underrated the Twins last year are now more on board than PECOTA, setting this year’s over/under at 82.5 wins. How did PECOTA and the Twins fall out of love so quickly? And is there reason to believe the Twins will again out-perform their projection by enough games to make the playoffs? Let’s take a stroll through the individual player projections and find out.

Last season’s Twins lineup was decent for the first three-plus months and then exceptional down the stretch, leading the AL in on-base percentage, slugging percentage, and runs scored in the second half. Nearly every regular performed well during the August/September offensive explosion, including veterans Brian Dozier and Joe Mauer playing a big part, but it was the second-half breakouts by 23-year-old Byron Buxton, 23-year-old Jorge Polanco, and 25-year-old Eddie Rosario that had Twins fans dreaming about a pitcher-bludgeoning future.

However, because second-half performance one year doesn’t actually correlate especially well to overall performance the next year, PECOTA doesn’t focus on it. Buxton, Polanco, and Rosario certainly get “credit” for the big second halves, but mostly just in the sense that it’s baked into their season-long numbers. PECOTA is built to look at the big picture, which can be good and bad. If you’re convinced Buxton, Polanco, and Rosario made meaningful, sustainable adjustments that led directly to improvement—a reasonable premise for which rookie hitting coach James Rowson received tons of praise—then you have every reason to think that they’ll out-perform PECOTA’s projections this season.

Of course, fans of every team tend to focus on positive examples of in-season improvement rather than on negative examples. For instance, very few of the same Twins fans optimistic about Buxton, Polanco, and Rosario based on their second-half breakouts—a group that certainly includes me in my longstanding role as Buxton’s no. 1 hype man—are exactly as pessimistic about 24-year-old Max Kepler based on his second-half struggles. And that’s fine, it’s the nature of fandom. But it’s also why a detached, bigger-picture view can often prove to be more accurate on a global scale.

PECOTA, like any good projection system, revolves around context-adjusted performance, multi-year track records, aging curves, and the career paths of comparable players, and so it generally likes Buxton, Polanco, and Rosario—and yes, Kepler too—because they’re young and talented and promising. It does not, however, view their second-half performances as anything more than a piece of the puzzle. With that mind, here’s a look at the Twins’ nine primary hitters last season—all of whom are slated for similar roles this year—comparing their True Average in 2017 versus their projected True Average in 2018: 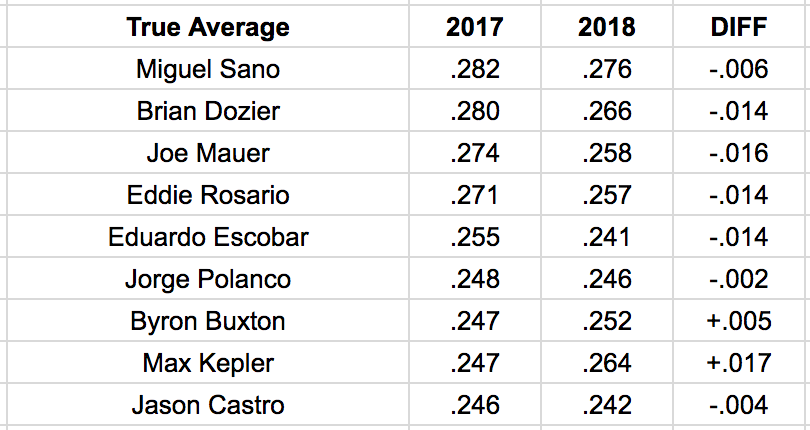 (Note: Morrison had a .294 True Average last season and is projected for .265 this season, which is both a bigger projected drop than any of last year’s regulars and still ranks third-best on the team. He’ll likely be getting most of his playing time at the expense of Eduardo Escobar, Robbie Grossman, and Kennys Vargas, who combined for a .254 True Average last season.)

For many of the same reasons detailed above, PECOTA sees Kepler improving the most compared to last year. It also sees Buxton improving slightly, but each of the other seven regulars are projected to be at least slightly worse. Boring old regression to the mean is to blame for some of that, and gaining or dropping a few points is also no big deal, but Dozier, Mauer, Rosario, and Escobar projected to lose 14-16 points of True Average apiece is notable. And yet, it does make at least some sense in the big picture.

I’m sure many Twins fans took one look at those projected numbers and scoffed at them, and I’d certainly bet the “over” for several of the hitters, yet collectively Minnesota is projected to score the fourth-most runs in the league this season after scoring … the fourth-most runs in the league last season. PECOTA actually likes the Twins’ lineup a lot, in the bigger picture. And if you’re convinced that rosier, smaller-picture views of several key hitters are more accurate, then just adjust your expected win total accordingly.

Lineup depth and Buxton’s otherworldly defense were Minnesota’s primary strengths last year and that figures to be true again, but is the pitching staff any better? Last season the Twins shaved 101 runs off their allowed total and still ranked just ninth in the league, which speaks to just how brutal their pitching was for the previous six seasons. Combined from 2011 to 2016, the Twins allowed 300 more runs than the next-worst team in the league, ranking last or second-to-last in five of the six years. Ninth place was a helluva accomplishment—their best finish since the first year of Target Field in 2010.

The front office made no secret about plans to upgrade the rotation and bullpen, talking about it publicly in a way that the previous regime never would have (and perhaps raising expectations too high in the process). They made Darvish a five-year contract offer in excess of $100 million—likely twice as much as the largest free agent signing in team history, $55 million for Ervin Santana three winters ago—and predictably fell short, instead completing lower-wattage moves that are sound individually but underwhelming collectively. And then last week they learned that Santana needed finger surgery, likely sidelining him until May.

Assuming the Twins go with a 12-man staff to open the season, the favorites to claim each spot seem fairly straightforward. The five-man rotation: Jose Berrios, Jake Odorizzi, Kyle Gibson, Adalberto Mejia, and either Anibal Sanchez or Phil Hughes filling in for Santana, with prospects Fernando Romero and Stephen Gonsalves waiting in the wings. The seven-man bullpen: Fernando Rodney, Addison Reed, Trevor Hildenberger, Zach Duke, Ryan Pressly, Tyler Duffey, and Taylor Rogers, with Alan Busenitz on the outside looking in thanks to having a minor-league option left. Here are PECOTA’s projected ERAs for that group:

Make no mistake, this is not a great staff. It lacks upside and high-end talent, save for Berrios and perhaps Romero around midseason, and the 35-year-old Santana was a poor bet to duplicate last season’s All-Star performance even before the surgery. However, what the Twins have successfully done—in part with a busy offseason of solid but unspectacular moves, but also through trades for depth pieces and prospect development—is raise the overall water level of pitching throughout the organization. It’s difficult to overstate just how much of a mess the Twins’ pitching was five years ago, or even two years ago, and that’s no longer the case.

But there’s a lot of space between “improved and no longer a mess” and “actually good,” and that’s where PECOTA sees the Twins’ pitching staff residing in 2018. None of the Twins’ top nine starter options, including Santana, are projected for an ERA under 4.00, and only Berrios (4.11) and Romero (4.24) are under 4.50. (The good news is that only reclamation projects Hughes and Sanchez are higher than 5.00.) It’s a similar story in the bullpen, where no one projects for a sub-3.50 ERA but nearly everyone is in the 3.75-4.25 range. There’s a lot more quality depth in place, even if it’s lacking in upside, and PECOTA agrees, projecting the Twins to rank eighth in runs allowed compared to ninth last season.

This is more or less the same Twins team that earned PECOTA’s preseason love and then won 85 games last year. They’re a little older and closer to their primes in a few key spots, but a little older and closer to their declines in a few others, with improved pitching depth, the same lack of high-end arms, the same above-average defense carried by Buxton, and an unexpected jolt of power in Morrison. And while the win totals aren’t quite an exact match, PECOTA views them more or less the same—projected to rank fourth in runs scored and eighth in runs allowed, after being fourth in runs scored and ninth in runs allowed last season.

Late last season I crunched the numbers on teams throughout baseball history that improved by 20-plus games, and found that 83 percent of them—five out of every six—had a worse record the next year. Typically teams that have such huge year-to-year improvements were playing at the peak of their ability or got more than a little lucky, and that tends not to carryover. Or: Regression. There’s no reason to assume the Twins can’t be among the 17 percent of hugely improved teams that get even better the following season, but the historical context also shows that an 81-win projection after an 85-win season isn’t necessarily such a bad thing.

You need to be logged in to comment. Login or Subscribe
deadheadbrewer
We should rarely bet against PECOTA, and the projections for the Twins are probably accurate. What is offering this Twins fan hope is what PECOTA can't see, which is the mass-exodus of talent from the Twins competition. No more J.D., Upton, Verlander, J. Wilson, Kinsler, Hosmer, Moose, Cain, Quintana, Robertson, Kahnle, Fraizer. One could field a competitive team with just the players who began 2017 in the AL Central, but who are no longer there.
Reply to deadheadbrewer