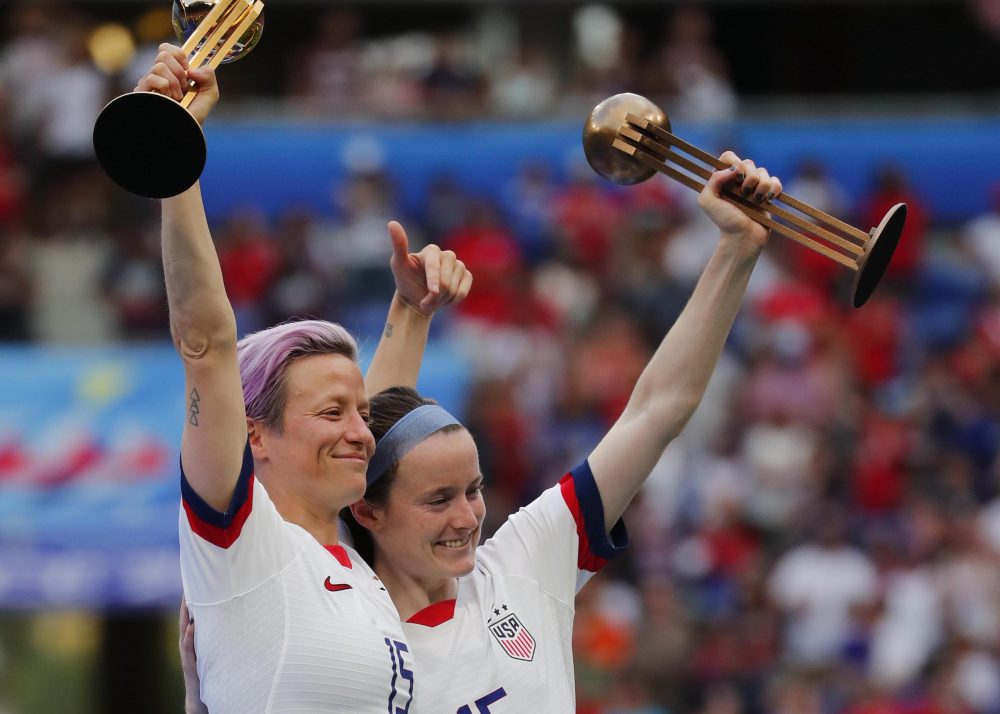 As I stood in a crowd of all ages, genders, and skin colors, and watched the US women’s national soccer team win their fourth World Cup, I found myself getting choked up. I saw all of the little girls in Rapinoe and Morgan jerseys utterly captivated, and remembered the joy I felt 20 years ago as a 9-year-old watching Brandi Chastain fall to her knees clutching her jersey in her hand, overcome with elation. Megan Rapinoe’s outstretched arms will be an image in the annals of history alongside Chastain. Both were defining moments in sports history, and a defining moment for me and so many young women like me.

Even though I’ve loved baseball since I was a child, I remained simply an enthusiastic fan and student of the game rather than a player. I tried one season of softball, but my heart wasn’t really in it. As a young athlete, my heart belonged to soccer because it was a sport where I felt seen. I felt represented. I felt like there wasn’t a limit on my dreams because I had seen them play out in front of me on television and saw how it captivated a country. I wasn’t shuttled to a different sport. I played the same sport with the same rules as the men. I even played with boys until my early teenage years, which was common practice among youth soccer teams in my area.

The USA Baseball women’s national team is not afforded the same stage and audience as their soccer-playing counterparts. In fact, many people, even baseball fans, don’t know they exist. Every game of the Little League World Series is televised, but not a single Women’s Baseball World Cup game was given coverage. The US team faces an uphill battle in international competition, playing against countries that have professional women’s baseball programs, which are lacking in the United States. Even Mo’ne Davis, possibly the most famous female baseball player of the modern era thanks to her historic performance in the 2014 Little League World Series, shifted to softball in college and gave up pitching because she was less comfortable with the underhand pitching motion.

The modern conversation about women in baseball tends to focus on standout players like Davis holding their own with the boys. Melissa Meyeux was the first female baseball player to be added to Major League Baseball’s international registration list, which meant she was eligible to be signed by a major-league club. She, too, was forced to switch her focus to softball. USA Baseball women’s national team pitcher and shortstop Ashton Landsdell has a commitment to play baseball at Georgia Highlands College. Even the FOX TV show Pitch — the first time Hollywood has focused on women playing baseball since A League of Their Own — was about the first woman to play in the major leagues.

But it’s not just about the ever-elusive first woman to play Major League Baseball and showing she can hack it against men. It’s about having a women’s game that exists alongside the men’s game — equal cultivation, equal investment, and equal air time. This is what the US women’s national soccer team — four-time World Cup champions — is still fighting for, despite being the most successful women’s team in the US in any sport.

Once the glass ceiling is shattered, we still have to pick up the pieces and build something better for those following our lead. There is hope, however. Justine Siegal, who holds a PhD in Sport Psychology and is the first woman to coach for an MLB organization, founded Baseball for All — an organization that provides resources and opportunities for girls to play baseball. Its young participants have already inspired stories that are slowly but surely elevating the women’s game.

You need to be logged in to comment. Login or Subscribe
Matthew Marquez
"It’s about having a women’s game that exists alongside the men’s game — equal cultivation, equal investment, and equal air time. This is what the US women’s national soccer team — four-time World Cup champions — is still fighting for, despite being the most successful women’s team in the US in any sport."

The interest isn't there because the skill levels are drastically different. If the level of skill ever improves to the level of say, women's MMA which has rightfully grown in popularity because the skills have improved to become close enough to the men, perhaps then a satisfactory (for you) increase of interest in those areas will happen. Let's be real- the USA women's team couldn't even beat a 15 year old boys team! The only reason they generated the interest they did was from people who hate Trump pretending to care about Soccer.
Reply to Matthew
Drew Corbett
I don't know that skill levels being drastically different explains the relative lack of interest. A lot of people enjoy college basketball more than the NBA because in the NBA you can play great defense denying a team an easy shot, but the players are so good that they can just drain a 3-pointer from anywhere. The elite skill unquestionably makes the game more impressive, but not necessarily more watchable for everyone.

And regarding the high interest level in the USA women's soccer team, I think you are discounting how much people like winners. I don't love soccer, but I thought it was fun to follow the team and watch them win. Same with hockey and basketball - I'm not a huge fan of either, but when the Wild or Timberwolves (lol) are doing well, I do get enjoyment out of watching their games or playoff runs.
Reply to Drew
Matthew Gold
This idea about beating a 15 year old boys team is utter nonsense, and completely irrelevant. Lots of people spend a lot of time and money watching college football and basketball, even though those teams are markedly inferior to the pros. Why do they do it? Exciting games, perhaps a more exciting type of game -- exactly the same things one can say about women's leagues.
Reply to Matthew
Matthew Marquez
They absolutely lost a scrimmage to a team of 15 year old boys https://www.google.com/url?sa=i&source=web&cd=&ved=2ahUKEwjk0qTq7tDjAhUE7Z8KHaKiD8cQzPwBegQIARAC&url=https%3A%2F%2Fwww.cbssports.com%2Fsoccer%2Fnews%2Fa-dallas-fc-under-15-boys-squad-beat-the-u-s-womens-national-team-in-a-scrimmage%2F&psig=AOvVaw3kHKxA42xc1txYPE6NVx37&ust=1564171441321088
Reply to Matthew
Mags44
Rapinoe is exactly the OPPOSITE of what a leader, and good role model should. She is a foul mouthed, political, look-at-me person. Compare that to Trout or Yelich - who play the game and are noticed because of what they do - not because of the crap they say. And, the women's soccer team wants to be paid the same as men, etc - well, it doesn't help their case when they lose to a U15 boys soccer team in Dallas prior to the World Cup. Rapinoe's 15 minutes are up. See ya!
Reply to Mags44
Byron Hauck
I'm always stunned by how toxic the comments here are. I hope it doesn't dissuade BP from continuing to explore new topics and voices.
Reply to Byron
Craig Goldstein
It absolutely won't, Byron. Thank you.
Reply to Craig
Matthew Marquez
How is disagreeing with someone's opinion "toxic" exactly?
Reply to Matthew
Drew Corbett
"The only reason they generated the interest they did was from people who hate Trump pretending to care about Soccer."

I think this was a really unfair statement. It was a US national team on a championship run in a major global sport - this is likely to generate interest no matter the politics. Dismissing people's interest in the USWNT as pretending to care about soccer because they hate Trump is pretty insulting to both the team and fans of it. On its own it doesn't necessarily invalidate other points that you wanted to make, but I'm not sure why you chose to include it with the rest of your comment.
Reply to Drew
Maureen mielke
Its come down to will women watch in great numbers and will broadcasters be incentivised to air the games and promote. Let's face it forthe most part women do not watch women's sport in great numbers.
Reply to Maureen