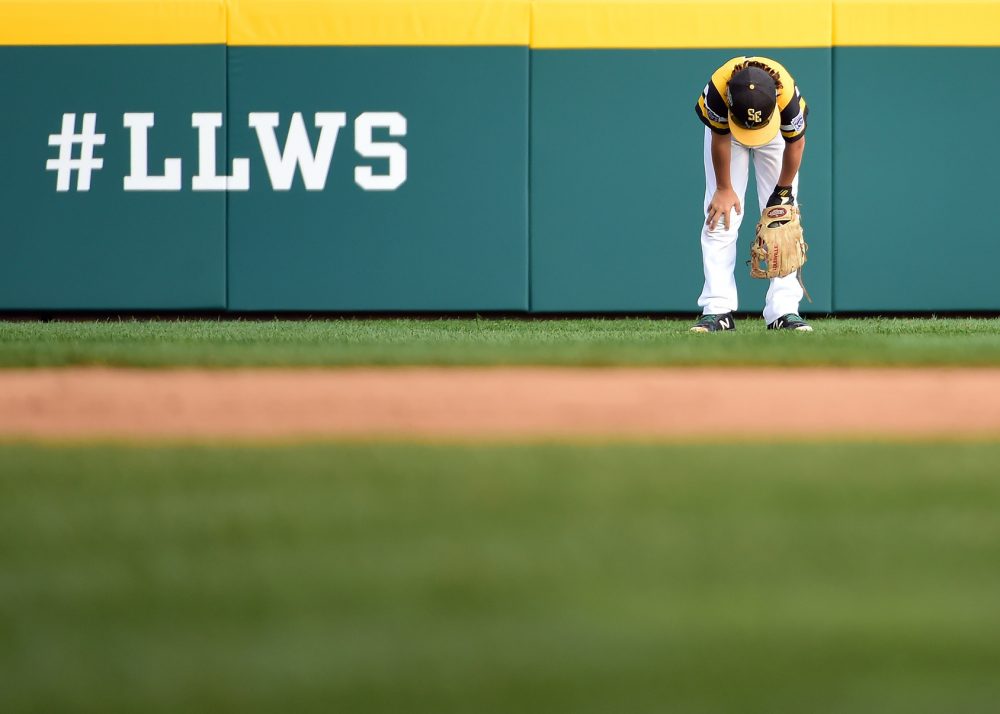 Baseball has always been a huge part of my life; as a 5-year-old I watched two things, Rugrats and Yankees games. I barely knew what was going on, but I loved every minute of it. Little League was an inevitability for me, it wasn’t a question of whether or not I’d want to play, it was a matter of when.

I remember everything about my first season. It was during the fall, so we only donned the color of MLB teams; we saved the real uniforms for the spring. We wore red shirts with the ballpark’s name on it and plain ball caps. Our whole uniform was red, which in 1999 meant we were the Cardinals. I still have a soft spot for Mark McGwire because of it.

Half of the kids on my team were there just because their parents needed something for them to do after school, the other half were genuinely interested in the sport. We were young enough that it didn’t matter either way. It was T-ball, no one took it seriously, and both girls and boys could play together without weird gender norms being placed on us. I don’t even think I knew what softball was at that point.

That didn’t last forever, though. Around age nine was the point where girls transitioned to softball. Where they’d have to learn a different game with different rules, and the boys continued playing baseball. But I didn’t want to play softball, I wanted to play baseball. The Yankees played baseball. Paul O’Neill played baseball. Softball wasn’t for me — I was a baseball player after all.

This attitude meant I was making waves in my community as a second grader. Technically there were no rule against me playing baseball, nothing to stop me. As long as my parents paid the sign-up fee, I got to play. That’s how Little League works for everyone, and while it made some people uncomfortable that I didn’t just go play softball like they wanted me to, I didn’t care.

I was the only girl playing in the league with the boys. All the other girls who I spent the previous two years playing T-ball with did what they were “supposed” to do, they enrolled in softball. But I refused, and effectively painted a target on my back in the process.

Do you know who gets angry about a girl playing alongside boys? It’s not the other kids, it’s the parents. To make matters worse, I was good, like really good. Better than the majority of my teammates, and that made some middle-aged men very upset. I was standing in the way of insecure men living through their sons who didn’t really want to play baseball at all. I caused some problems. I batted too high in the lineup, I got too much playing time, I looked way cuter in my uniform than their kids — they couldn’t take it.

Men feel threatened by women participating, and God forbid excelling in areas they believe belong exclusively to them. It’s true in most things, but it specifically takes an ugly form when sports are involved, and apparently the age of the girl in question doesn’t matter. Being a kid didn’t save me from rampant misogyny.

The worst of it came from a guy named Ed. Ed had a Napoleon complex. He was a very tiny, very angry man, and his son had horrible hand-eye coordination. To put in perspective how truly insane this man was — he’d regularly get thrown out of the park for arguing calls…in a game between 8-10-year-olds. Every Opening Day we had a parade, each team decorated a pick-up truck like a float. Ed had his float professionally commissioned by a contractor. One time the park told him he couldn’t be the Yankees, because of course he was a Yankees fan, and he refused to coach that year. I couldn’t make this stuff up if I wanted to.

In short, Ed was a big jerk, and I was a little girl he picked on because my existence offended him.

I was a catcher. Growing up in Florida, no one wanted to put on the catcher’s equipment in the heat, but I liked having control of the game and the dramatics of catching someone stealing or throwing your helmet back to catch a foul ball was everything to me.

I was a good catcher, but I was a horrible pitcher. That didn’t stop me from periodically getting on the mound, though. My “fondest” memory of Ed happened about halfway through a game. With his son at the plate, and two strikes on him, Ed calls time out and flies out of the dug out. It was fun, because I knew it was going to be something about me.

I was 10, throwing 35 mph at most, gripping the ball with my entire baby hand, and a full-grown man accused me of purposely picking a glove with a white line across it to distract batters. That’s why he stopped the game. Imagine having a middle-aged man storming out of a Little League dugout over a glove, and insisting that you’re not pitching well, but that the equipment you’re using is giving you an upper hand. The volunteer umpire didn’t know what to do, especially because Ed was trying to get me kicked out of the entire game. They decided on just having me use a different glove, which seemed ridiculous at the time, because I was already into the third inning. He couldn’t handle the fact that I was a better baseball player than his son. Even with the glove switch, I got his son out.

Ed was bad and the men who coached alongside him weren’t much better. Everything I did was up for debate. My stolen base shouldn’t count, I left the bag too early. I didn’t actually catch that foul ball, it hit the ground first. It seemed like every move I made brought up some topic of discussion, and everyone knew it was because I dared to be a girl on the field.

A couple years later Ed found a new way to ruin my life by picking me to be on his team. I got on base and he sent in a pinch runner because I was on my period. That was a fun one.

Even the coaches I loved weren’t free from misogynistic tendencies. Terry was my favorite. We were the Rangers, a team I frequently forgot existed when I was a pre-teen, and we were absolutely horrible. There were about three of us who knew how to play and the rest couldn’t get the bat on the ball if their lives depended on it. Still, we were kids, so it was fun just to be playing.

One game I was gearing up in between innings, pulling my chest protector over my body, then struggling with my leg guards. I couldn’t get the knee savers on right, our hand-me-down equipment was falling apart, I was trying to MacGyver it. I was taking longer than usual, so Terry ever so sweetly calls out “Spring, hurry up. What are you doing, getting ready for the prom?” It’s a good joke, one my parents still randomly bring up to this day. Witty quip, 10 points, and something he wouldn’t have said to any of the boys on the team. I got mad at the time but didn’t understand why. I understand now.

I was the first girl to play baseball at that park, but I wasn’t the last. It’s odd being young and having a real life impact on the world around you. You don’t realize the gravity of it, and you kind of shrug it off like it’s no big deal. One season the sister of a boy I played with for years signed up to play baseball too, and she said she did it because of me. She always wanted to give the game a shot, but she didn’t think she could, not until she saw me playing. Slowly but surely I started having female teammates and hearing stories about other girls, older and younger, playing on baseball teams too. Aside from my parents, my biggest fan was a single mom whose son I played with for years. She cheered the loudest for me, before even learning my name, and I still remember what she said when I asked her why: She called me a badass, and said she loved the pissed off look on the faces of the men who doubted me until they saw how good I was.

Women in Baseball Week was special to me, because for as long as I can remember, I’ve been a woman in baseball. I spent nearly a decade of my life at that Little League park, playing, volunteering — at one point I even had the nerve to be a first base umpire, and I’m shocked they didn’t play the game in protest. I was known around there as the girl who played baseball. I had the respect of my peers, who saw how hard I worked and the talent I possessed, but was looked down upon by the adult men who couldn’t see past my gender long enough to appreciate what I was bringing to the game. I grew up getting a lot of “you’re good for a girl” but rarely a pure compliment.

There are still a lot of times I’m slapped in the face with the fact that MLB doesn’t really love me. It’s a tough pill to swallow, and every time we take one step forward we take three more back, but I want to focus on the good.

At Baseball Prospectus, we celebrated Women in Baseball Week in a way other sports sites haven’t; by featuring a wide variety of pieces written by women, every day last week. From Beth Woerner’s brilliant in-depth look at pitch design to Allison McCague’s fight to give young female fans their very own Megan Rapinoe, we’ve published high quality content throughout the week for every avenue of the game. Baseball Prospectus always brings something special to the table, but this week the staff has truly gone above and beyond. Or maybe I’m just biased.

Sometimes it’s hard to believe things will change, but we’re taking a step in the right direction. As dangerous as it is, I have to remain hopeful, that someday, somehow women will be viewed as equals when it comes to this game. I have to believe it. Not for me, for that little girl who took a chance on baseball all those years ago, and all the ones after her who are doing it too.

You need to be logged in to comment. Login or Subscribe
Byron Hauck
You wouldn't think I could still be shocked at the mundane, routine ways that men try to control women and girls, and yet here you are with half a dozen examples I never would have dreamed of. I'm so glad no one managed to make you less awesome than you were!
Reply to Byron
Greg Simons
Nice article, and bravo to you for sticking to your guns and doing what you loved.
Reply to Greg