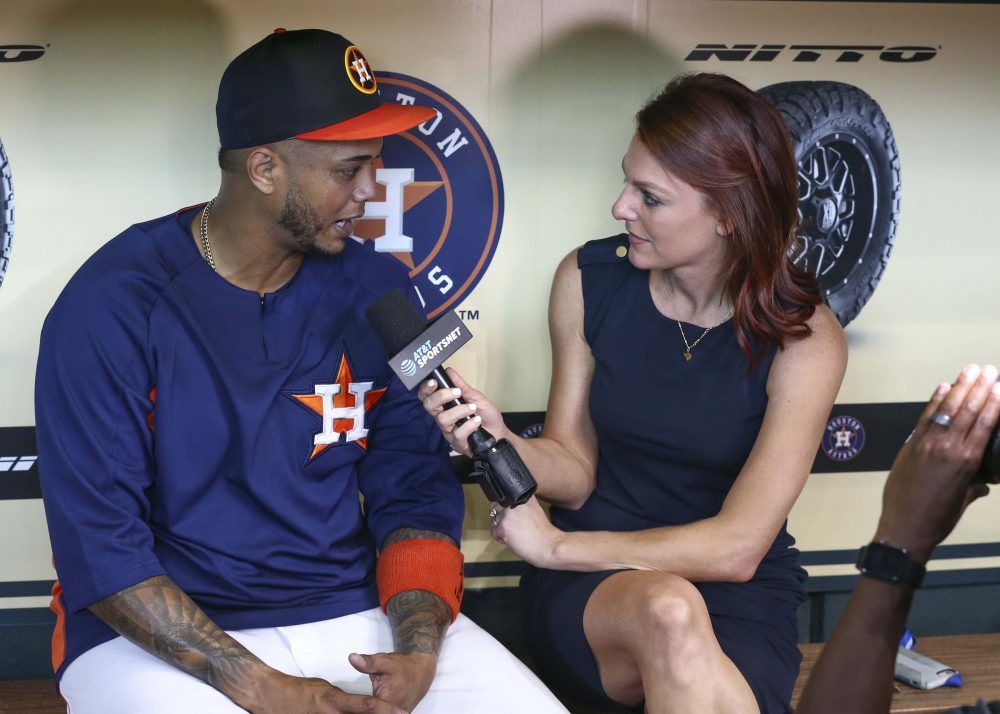 It’s 8 pm, and the chiming of my Skype ringtone breaks the relative silence on a quiet English street. Many across the Atlantic are huddled on their sofas and taking in the latest drama on television, besides a select number of British baseball fans. They’re dotted across the country, observing a sport that tends to be anything but friendly to their BST time zone.

This early night happened to differ. The Padres had traveled to Wrigley Field, while the Twins were playing the Athletics. The Rockies had to face numerous former teammates now in pinstripes, and James Paxton was not having the greatest of days.

But right now, my focus wasn’t on the men playing baseball.

“Hey! How are you?” comes the voice from my laptop screen. Up pops Julia Morales, field reporter on Astros television broadcasts and AT&T SportsNet reporter.

For Women in Baseball Week here at BP, I wanted to cover women in baseball media. When I started getting into the sport a few years ago, I was mainly searching for coverage of games and absorbing all of the basic knowledge of the sport that I could possibly obtain. But there’s always another layer to my interest. I look for the women.

As a writer, I first tried to follow as many beat reporters and sports journalists as I could. This additional layer of relatability in a male-dominated field made it easier for me to become engrossed in different aspects of baseball, a game that I soon found myself staying up into the early hours of the morning to watch.

But Julia Morales’ journey into the life of a reporter doesn’t have the most relatable of beginnings. She admits that she was always an entertainer growing up, and yet the realization that she wanted to be a reporter happened to hit her during a party for her father. Not just any party — an election party.

When I was about 10 years old, my dad ran for US Senate and did pretty much the unthinkable. He was a schoolteacher that had a lot of passion, basically went out and got all the signatures that he needed on a petition because he didn’t have a lot of money or backing. He went out there and got people registered to vote and really had an inspiring campaign that kind of blew up nationally.

Because he continued to do well, he won the primary and then once he was in the race, he was the candidate, lots of media started coming around. We had a lot of writers and reporters in our house. At the election party, I watched reporters standing in front of the cameras doing live interviews, and at 10- years old, I was mesmerized.

I thought, I want to be on TV. The sports part of it came as I grew older. I started to realize there were opportunities on TV that were very different than the women that I saw on the news every night. When I realized that you could be a female and be a sports reporter, I was dead set on it.

Living across the Atlantic can occasionally feel as though you’re on the outside looking in. The sport is nowhere near the level of popularity that is’s reached in America, and the games are often on after midnight. Having the opportunity to follow so many powerful women working in baseball media gives me a window to see through, a more vicarious experience of such a field.

I was lucky enough to witness my first Major League Baseball game in my home country for the London Series. I know what it feels like to attend a game in a refurbished Olympic Stadium. A stadium where outfielders are constantly double-checking behind them, their usual positions now feeling as though their backs are up against the center field fence. It has copious amounts of foul territory, enabling the likes of catchers and first basemen to grab hold of a ball that would usually be swallowed up behind the netting in usual ballparks.

Morales gave me an insight into life at one of these “usual ballparks” and how there’s always something new every day — a concept that I also often find intertwining with my cycling journalism and baseball writing.

There’s just something new every day. You have no idea what you’re going to find yourself in. For me, covering a team that was not very good in the beginning when I got this job, to celebrating things like first hits and finding those really important because the wins weren’t coming, to a couple years later, a no-hitter just kind of falls into my lap, the first one at this ballpark.

Then I find myself covering a World Series team. It’s just such an incredible opportunity to just not know where it’s going to lead you or where you’ll find yourself on a day-to-day basis, so I have to say [the two greatest aspects about my job are] the people, and just the opportunity to do something really special every day.

Morales was inside Minute Maid Park, Skyping me during the middle innings of the Astros’ 5-3 win over the Rangers. Houston was up 2-0 courtesy of a home run off the bat of Michael Brantley that allowed Alex Bregman to score. As she described her favorite interview so far, I couldn’t help but imagine it would surround the charismatic 25-year-old slugger.

Some of my favorite interviews are of the parents of guys who are making their debuts and the touching side of the call-up, and how special it is to everyone in their family. I love those. It’s really hard to pick something over that, but I think back to all the games I’ve watched in my entire life and being a sports fan, I used to say my favorite game ever that I was there live for was when the Texas Longhorns beat USC in the national championship in 2005.

It was one of the greatest college football games ever played, but the Astros outdid them with Game 5 of the World Series. So interviewing Alex Bregman, minutes after he had just delivered the game-winning hit, a long extra-inning game that really put them in position to win the World Series as they headed to LA, looking back obviously it’s even bigger than what we knew at the time because they went on to win it. But at the time I would think that that was just the most exciting interview because of what they had gone through to get that win and how big that win really was.

Morales is one of many women who have broken through in baseball, constantly shining as a beacon of inspiration to women across the world. Jessica Mendoza — ESPN’s first female MLB analyst — frequently guides me through broadcasts, letting me in on action behind the scenes. Marly Rivera encourages me to attempt to learn another language. I recently witnessed the ESPN/ESPN Deportes reporter on TV at the Home Run Derby, her bilingual abilities allowing us insights into the life of Vladimir Guerrero Jr.

Representation is important, and seeing women involved in baseball media gives hope to thousands of young girls and women who are being exposed to people like themselves. I discussed the importance of women in baseball with Morales.

It’s something I feel like we’re talking about more recently, and I love that and I love that I run into women with every trip that I take and every ballpark that I attend, I see women more and more. This is my seventh year in the league and I’ve definitely seen it grow. I love being able to work with women on the PR side … to know that there’s a woman on the other side is always really refreshing, just to know that there are more of us.

Of course, they’re starting to pop up in the front office too. There’s a head groundskeeper in Baltimore who I love watching every time that I go there! She runs the show. When it starts to rain, she’s the first one out telling everyone what to do and how long it’s going to be. It’s great, every time I see more and more of us popping up in different jobs. But it really is important. We have a perspective of things that I think are different sometimes. We have a voice and we know the game and we always have.

Before saying goodbye, I had one final question for Morales. If she could give one piece of advice to women wanting to pursue a career within baseball media, what would it be? Granted, it was a hard question. She told me that herself, asking “one? just one piece of advice?” before giving the most meaningful closing statement in an interview that I have ever received.

The first thing I would say is to go in ready to work. Be ready to have a work ethic. If you’re trying to work in baseball media, think about what you’re covering. You’re covering guys who are putting their lives out there and doing everything that they can, they’re sacrificing everything they can to play this wonderful game. Wouldn’t you hope that you would put some serious effort into being able to cover these guys who have done what they have in order to get where they are?

The work ethic is huge, it’s so competitive. There are so many people in this world. There are so many fans of this great game, and the more women that find themselves in positions where either they’re on TV, or writing or putting their faces out there, the more the younger generations are going to see it and want to be a part of it too. Studying the game is huge too. We should never feel like we know enough. That goes for men and women. Just keep pushing this game to a place where we think it could go. It’s a great game, we love it, but we all know we want to make it better.

My last piece of advice? Shake everyone’s hand. As big as this world is, it’s just as small. Especially when you talk baseball media. The sports world is pretty small, but to even get it down to just the baseball side of things, people bounce around. You bounce around jobs. Players bounce around. You never know if you’ll cover a guy with another team, or what stories could help you in the future.

Front offices — you know how much change there is in the game and so you don’t know who you’ll run into again. As long as you keep introducing yourself and shaking hands with people, it’s so important for you and your networking. It’s never too early to start that. I would say shaking hands and getting to know people, as well as studying. Getting ready to get in there and grind, just like the guys do. We’re not any better. That’s my advice!

Throughout the interview, I could tell that Julia was really passionate about her fellow women in baseball. And here she was, Skyping with a woman all the way over in Britain during not only an Astros game, but one of the busiest times of their season. I’m incredibly thankful that she gave me this opportunity. As Morales told me: “It’s important in all sports to have women integrated in different ways. We work well with others.”