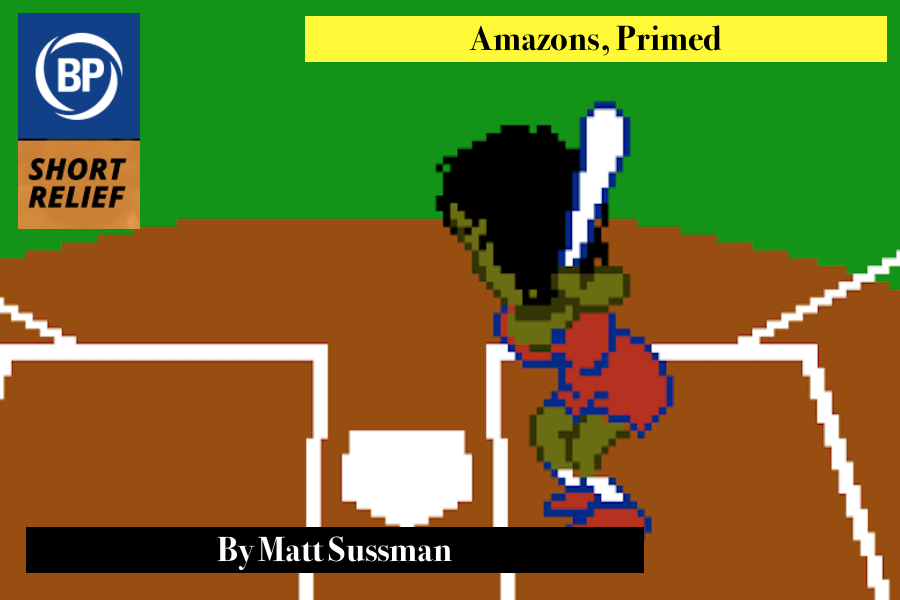 Dusty Diamond’s All-Star Softball was one of the more overlooked baseball titles of the 8-bit era. This is an often tossed about adjective for anything that isn’t Mario or Zelda, but I can vouch for its overlookability, since I discovered it about five years ago and now it’s probably one of my three favorite baseball titles. The game was developed by Brøderbund, best known for Myst and the adaptation of Where in the World is Carmen Sandiego? but didn’t seem to connect on this one. Maybe because it was branded as softball instead of baseball, not that the mechanics of the game differentiate.

Dusty Diamond has a terrific create-a-team gameplay where you and the other captain each pick from 60 unique players, each with various strengths, weaknesses, and idiosyncrasies. You can choose fast pitch or slow and play in a number of unique fields, all with various sandlot obstacles like ponds and rocks.

With this being Women in Baseball week, it’s unfortunate only one female player was included in the free agent pool, a witch named Zelda who swung her broom for a bat. However, as you progress through the game, after five wins against the rest of the “league,” you get a crack at the final boss of sorts: the Amazons. 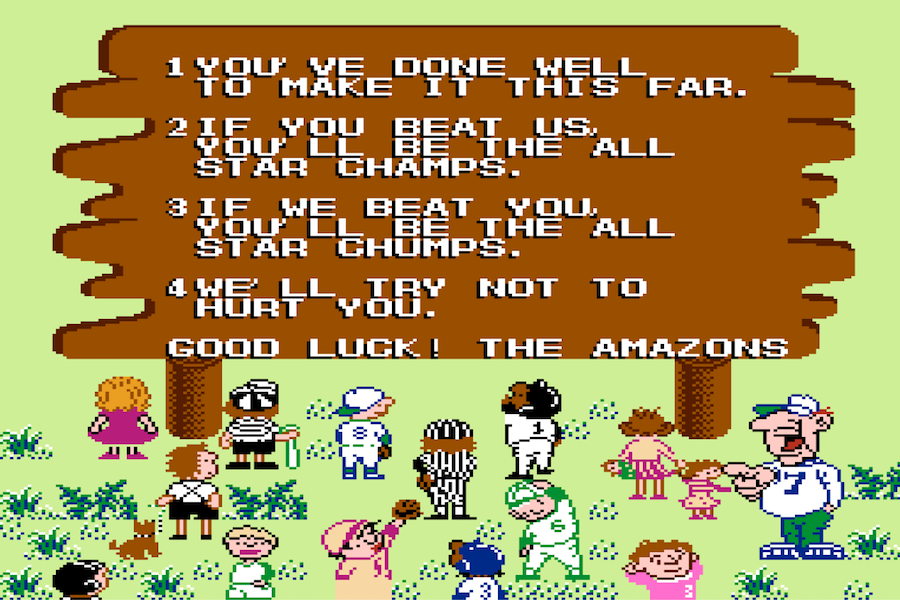 The all-female Amazons is the most difficult side in the game, by far. They can run, pitch, throw you out at first base from the outfield and smash dingers. The only way to get through the team is usually make the pitcher tired by the fifth or sixth inning and hope for a three-run bomb. Because they’re going to have some runs on the board by then.

The team of Diane, Susie, Judy, Nancy, Debbie, Lynn, Mary, Karen, Jane and Kim, certainly lived up to their potential with the taunting sign you see every time you start a game with them, and it’s going to take several games to get past them. But like in typical male-dominated society, it doesn’t matter if you lose to the Amazons 23 times, you can beat them on the 24th and the glory is all the same. They had to be on their game 100 percent of the time. We’ve yet to see a better video game team than the Amazons, which is a shame since this game had such franchise potential. It’s just a shame Zelda (the witch, not the princess … okay the princess also) didn’t make the team. 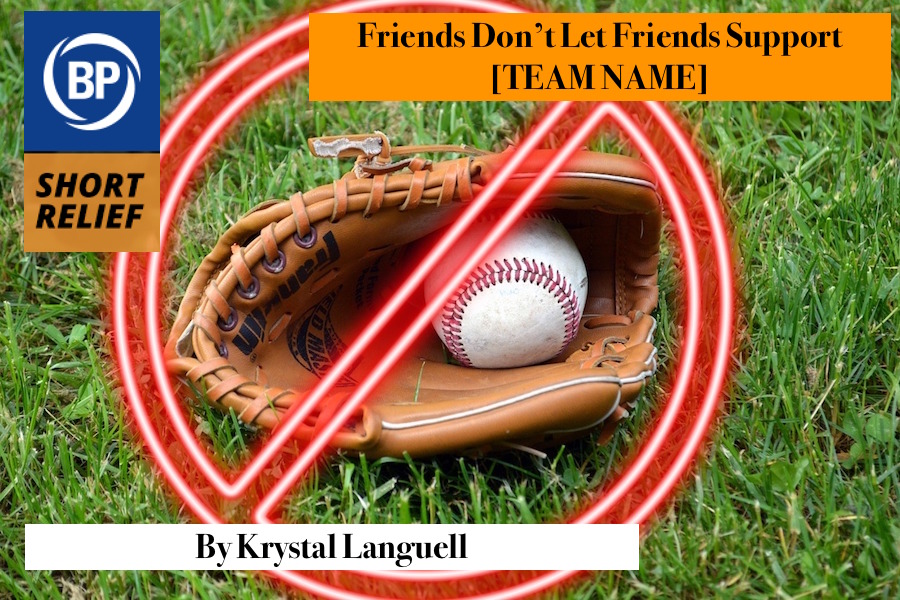 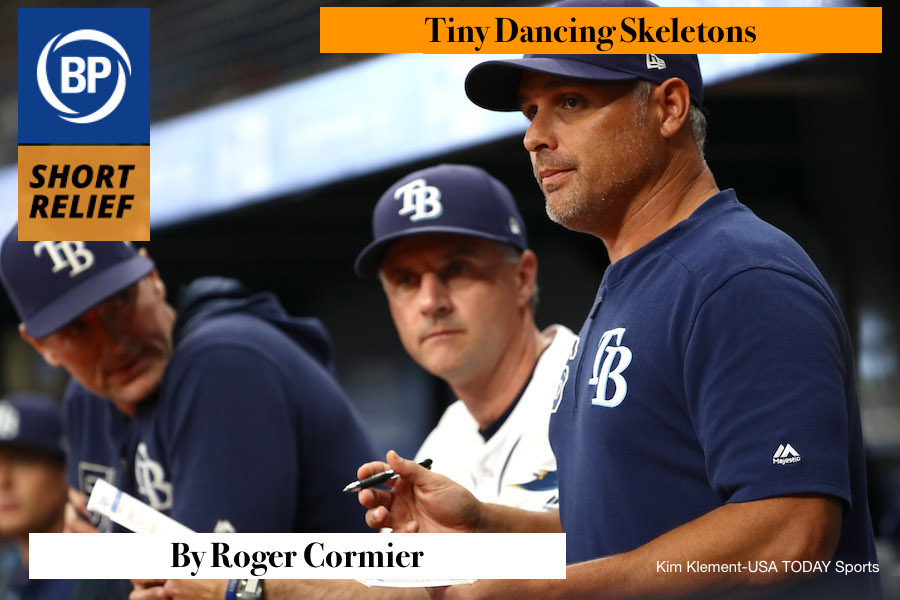 I first saw you at Tropicana Field, sitting at the end of row 5 in section 118.

You were with your friend, a friend whose purpose in life that summer afternoon was apparently to make sure you did not keep score correctly.

You first saw me with two outs in the bottom of the third inning, one row behind and six seats to your left, the closest living stranger of yours, when the foul ball with the 105.4 mph exit velocity reminded us of the protective netting, and your friend shouted something about how the netting was ruining their joy, and that they could have caught it with one hand, had in fact done so just the previous May, and you turned around in embarrassment and locked eyes with me, maybe hearing your friend ask you for confirmation on the date of this alleged catch, maybe not.

I nervously looked back down at my scorecard, hoping you noticed I too was keeping score. It helps me concentrate. I would like to think I concentrate on every pitch, but if I am being honest with myself and with you, social media tends to get in the way. Oh, doesn’t it always? Why do we need Tweetdeck to read everybody’s three and a half hour nightly nervous breakdowns? Confirmation of our insanity? Why not go sane? When Earl Wilson said “A baseball game is simply a nervous breakdown divided into nine innings,” he meant baseball on Twitter half a century before its existence.

It was the bottom of the fifth inning when I figured out you would agree with me, gently adding that to be fair, you’ve learned a lot about how people who aren’t yourself live, and that shaped you into a more understanding individual, but maybe that was just time doing its thing? There is no way of knowing, we would agree over brunch, which is a meal I positively live for now.

You showed me a different face in the top of the tenth. It wasn’t the “sorry about my friend” look I grew accustomed to and fell for. It was the “I can’t believe they scored that a hit” visage. “I was just thinking that!” I thankfully thought and did not say.

I heard you ask your friend in the bottom of the twelfth “When you first read about the ‘loose bodies’ in Blake Snell’s elbow, did you picture tiny dancing skeletons showing up in his X-Ray?” Your friend left plenty of time for a response, so I added “With the teeniest tuft of hair on their chins?” I forgot to say this out loud, so you just sat there in silence with your joyless companion.

Your friend left in the thirteenth. I ran out of ink in the fourteenth, you out of boxes in your scorecard in the fifteenth. Yet we stayed. For each web gem by the home team, you turned and nodded to me. For each profanity barked from the field, I feigned shock, putting my right hand over my mouth, and you looked at me and chuckled.

It was not until the top of the twenty seventh when I worried our song and dance routine would start to get old for one of us. Kevin Cash then tried to move his pitcher to first base, and his first baseman to the bench, and the designated hitter to the parking lot I suppose, and Alex Cora made a bunch of faces and expressed anger, because there was confusion, and there was a lot of doubt, and I sat there, dumbfounded, legs very much asleep, not realizing Cora and I were one in the same, totally and utterly lost and scared of what we do not know and finding nobody out there to explain what is really going on. Why do we always do this to ourselves, Alex? We fall in love so easy. Don’t you know you’re too old to do such a foolish thing? Grow up, Alex. I’m doing the same first thing tomorrow, I swear.

Then I thought of the perfect one-liner. It was so perfect that even if I sounded like a frog who just watched the season four finale of Veronica Mars after not speaking for, I dunno, days, it would not matter, for it was so deliciously tart, yet painfully honest, so no one could possibly be mad at me, for I had nailed the situation and its place in the universe at the very moment so flawlessly with just a few words. You would have applauded and demanded plans to meet at a later date, and then we would never spend another day apart.

Then you stood up and explained Kevin Cash’s maneuver in a loud yet calm voice to Alex Cora and the confused umpires, who morphed right in front of our very eyes into confident umpires. Alex Cora smirked, pointed at you, shook his head, and walked towards the dugout. Kevin Cash jogged over to you and asked if you would like to join the front office.