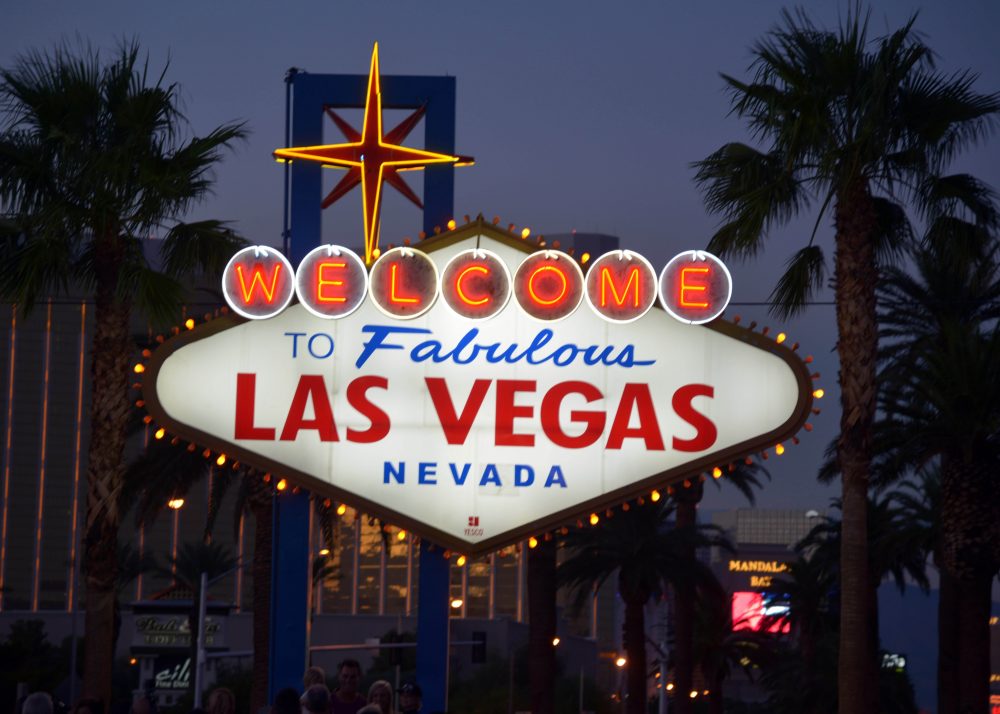 Each spring, I compare PECOTA’s projected team records to Bovada’s over/under team win totals. It’s one of my favorite articles to write, but it’s become considerably less fun because the projection system and the odds-makers have started to agree too much. PECOTA and Bovada were within 2.5 wins of each other on 14 of the 30 teams in 2017 and 21 of the 30 teams in 2018. It’s worse than ever this season, as the two sides are within 2.5 wins on 23 of the 30 teams. That doesn’t leave us much room for a fight. Or an edge.

Research by Rob Mains suggests that PECOTA shapes public perception of teams enough to potentially influence gambling lines, so perhaps it’s our own fault that other students seem to be copying off our paper more and more often, but our grades are still good. When there was a disagreement of more than 2.5 wins during the past two seasons, PECOTA was correct 68 percent of the time, going a combined 17-8 picking over/under Bovada’s betting line. If you’d have trusted PECOTA and bet $100 on each of those teams, you’d have turned a nifty $820 profit.

This season, there are only seven teams with a disagreement of more than 2.5 wins. Before getting to them, here are the 23 teams on which PECOTA and Bovada more or less agree: 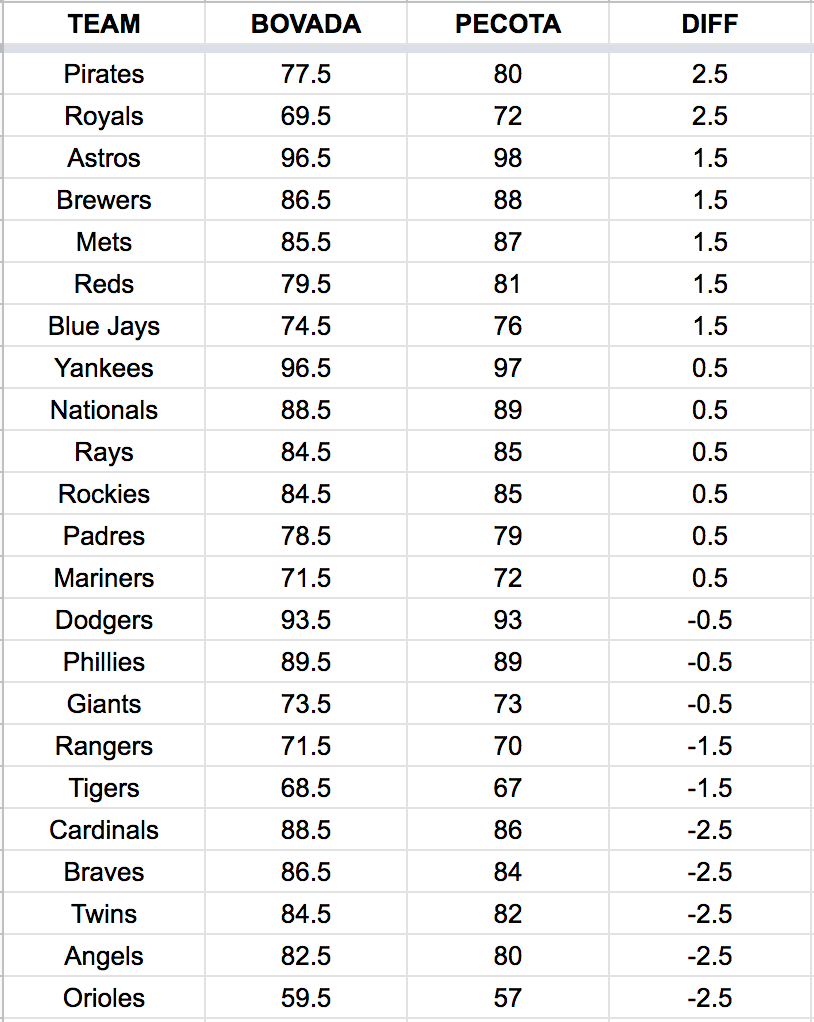 Bovada, like most odds-makers, sets every team total with a half-win involved to avoid ties. Nearly one-third of all teams (9 of 30) are within that half-win margin and more than half of all teams (16 of 30) are within 1.5 wins. That’s a tremendous amount of agreement, and suggests that Bovada and other odds-makers are utilizing many of the same resources and methods to set their lines as PECOTA is to generate its projections.

Among the 23 teams with strong agreement, both PECOTA and Bovada see the Astros as the best team in baseball and the Orioles as the worst team in baseball. In fact, PECOTA has a reputation for hating the Orioles and the Royals, and for loving the Rays, but Bovada sees all three of those teams in roughly the same light for 2019. (PECOTA also correctly predicted all three of those teams’ over/under totals last year, reputations or not, and is higher than Bovada on the Royals this season. Just saying.)

Here are the three teams that PECOTA is high on:

What an odd trio.

Public perception seems very down on Cleveland, which makes sense. Not only are the Indians coming off an underwhelming 91-win season (compared to a 94.5-win over/under), for much of the offseason rumors swirled about the cost-cutting front office possibly trading Corey Kluber or Trevor Bauer. Instead they were able to shed payroll in less obtrusive ways, although it’s hard to argue that they spent the winter actively trying to get better.

PECOTA still thinks Cleveland is clearly the class of the AL Central, and because it projects the other four teams in the division to go 291-357 (.449) that leaves a lot of room for the Indians to pad their win total. I’m somewhat skeptical of the 96-win projection, and in particular PECOTA’s league-high love of the Indians’ defense, but the best team in the worst division should win more than 90 games.

Arizona traded Paul Goldschmidt and lost free agents Patrick Corbin and A.J. Pollock following an 82-win season, so the public understandably perceives a rebuilding team. PECOTA thinks there’s enough talent left on the roster—and especially on the pitching staff—to be competitive, projecting 81 wins. Each of the top four starters (Zack Greinke, Robbie Ray, Zack Godley, Luke Weaver) project for a sub-3.75 ERA and even fifth starter Merrill Kelly has a decent 4.12 ERA projection in his first season back from Korea.

I’m skeptical that Arizona’s lineup will score enough runs—no one projects for a DRC+ above 109—but in general the idea that the Diamondbacks are less of a lost cause than everyone assumes seems pretty reasonable. They have a good, deep rotation, plus a potentially decent bullpen led by Archie Bradley, Greg Holland, and Yoshihisa Hirano, and PECOTA thinks offseason pickups Carson Kelly and Wilmer Flores were sound additions to the lineup.

PECOTA doesn’t actually like the Marlins, projecting them for by far the worst record in the National League and the second-worst record overall, ahead of only the worst team the system has ever laid its virtual eyes on. Bovada ranks Miami exactly the same way—worst in the NL, second-worst overall—but just does so with slightly less respect. Miami is less an example of sizable disagreement and more an example of regression dragging everything away from extremes. Everyone thinks the Marlins will stink.

Here are the four teams that PECOTA is low on:

Everyone associated with the Cubs, from fans and media to Joe Maddon and Theo Epstein themselves, seems very angry at PECOTA. Royals fans even think they’re taking things a little too seriously. As soon as I saw the Cubs’ projected record I knew it would dominate PECOTA-related headlines this year, and for whatever it’s worth I’d personally bet on the Cubs to beat that 79-win projection. However, of note is that Bovada’s line is also big dropoff from last year’s 95 wins and even the 88.5-win over/under is way down from last year’s 94.5-win over/under.

PECOTA’s stance on the Cubs is the harshest around, and because of that it provided literal bulletin board material for Maddon and company, but you’d be hard-pressed to find a prominent odds-maker or projection system that doesn’t predict a sizable decline in Wrigleyville. If anything, PECOTA has also provided some cover for the front office’s lack of offseason spending, allowing Epstein to answer questions about why PECOTA hates the Cubs so much rather than about why the Cubs did so little to improve their team.

On the other side of town, I can’t help but wonder whether months of Manny Machado rumors raised expectations for the White Sox somehow, because PECOTA sees them as the same non-competitive rebuilding team as last year even while projecting big things from Eloy Jimenez whenever they decide to stop suppressing his service time. I’d personally pick the White Sox to finish in third place and “third place” sounds sort of good, but like last season third place in the AL Central could lose 90-plus games.

Boston and Oakland dramatically out-performed expectations last season, with the Red Sox winning an MLB-high 108 games and the World Series while the A’s won 97 games for their best record since 2002. I’m sure most people would agree that they’re both likely to win fewer games this year—Bovada’s over/under total has them declining by 13 wins apiece—although PECOTA admittedly takes a pretty hard line on that stance.

Not that it’ll lessen PECOTA’s hate mail from New England, but the Red Sox are still projected for the fifth-best record in baseball and an easy path to a playoff spot. There’s no such disclaimer with the A’s, who’re projected to finish below .500 (which, in fairness, they did in 2015, 2016, and 2017). No one (including PECOTA) expected the A’s to jump from 75 to 97 wins last season, and no one (except PECOTA) expects the A’s to fall from 97 to 78 wins this season, but as the classic saying goes, that’s why they play the games and we run the projections.