You shouldn’t bet on baseball.

OK, now that we’ve got that out of the way let’s talk about Wall Street, which some of you probably think of the same way as betting on baseball. One of the sayings you hear about Wall Street is “the market is a discounting instrument.” In other words, the price of a single f stock, like Apple, or a bunch of stocks, like the 30 that make up the Dow Jones Industrial Average, is a reflection of investors’ expectations of the future, discounted back to today. Apple closed at $129.08 on Friday because investors expect it to deliver a stream of earnings and dividends, relative to inflation, to make it worth $129.08 as of 4:00 pm EST on Friday, February 3, 2017.

News can change the outlook. If Apple announces a better-than-expected product launch, investors will increase their expectations of future earnings, and the stock will likely move up. If the government decides to slap a tariff on iPhones made in China, future earnings will be imperiled and the stock will likely move down. I use the word likely because as Joaquin Andujar would say, youneverknow. Some news moves markets, some news doesn’t.

The same is true of betting markets. If there’s a downpour the morning of a horse race, it’ll move the betting markets. Bets on horses known to run well in mud will go up in price and those on horses that prefer a dry surface will go down. If a key player for a football team gets injured during practice before a game, the odds on that game will change. Some news moves markets.

This also applies to baseball betting markets. When a team adds a big star—think the Red Sox signing David Price or trading for Chris Sale—the news moves the odds for the Red Sox. New information should move markets. PECOTA is news. Does it move markets? Let’s run a real-time test.

I’m going to present two tables: One for the American League and one for the National League. I’m going to list, for each team, their current projected PECOTA wins for the upcoming season as well as their odds to win the pennant, per the Superbook sportsbook website. Everything is as of Super Bowl Sunday morning, February 5.

Here are the figures for the American League: 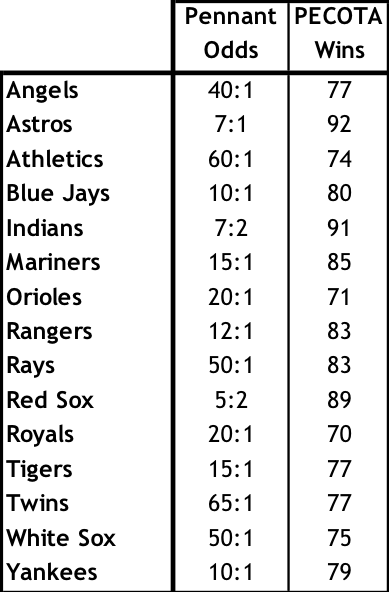 And the National League: 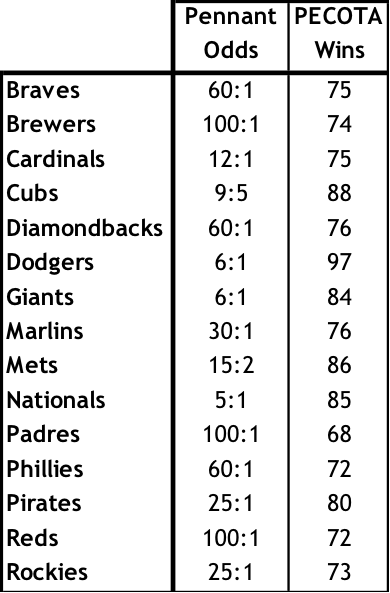 Wait, I know what you’re going to say: “Pennant odds and wins! Apples and oranges!” True enough. Given the divisions in which they play and the way their rosters are constructed, you can make a cogent argument that, for example, the Dodgers are well positioned to win a lot of games but the Cubs are better positioned to win the National League pennant by prevailing in a short postseason series. So if I’m going to compare pennant odds with win projections (which I am), I’m not comparing the same thing.

That’s true, but I don’t think the numbers are going to be all that far removed. The teams that win the most games are generally the ones we favor to win the pennant, and if they’re not the difference shouldn’t be large. We usually don’t expect 85-win teams to be strong pennant contenders or 95-win teams to have no chance. (Additionally, I couldn’t find any over/under figures for wins; they tend to get released later this month. Admittedly, I’m not an expert: I follow the admonition in the first sentence of this piece. If someone’s seen them, please leave a comment.)

I’m going to show you two graphs, one for each league, because I think they illustrate what’s going on better than the 15 rows of numbers in the two tables above. In each graph, the numbers along the x-axis are projected wins per PECOTA. The numbers along the y-axis are the Superbook pennant odds. I used a logarithmic scale on the y-axis, but if you don’t know what that is, don’t worry; it’s not an important detail. Each dot on the graph represents the projected wins and the pennant odds for one team. I labeled each dot so you can see which team it represents. I also included a trend line, for reasons I’ll explain in a minute. 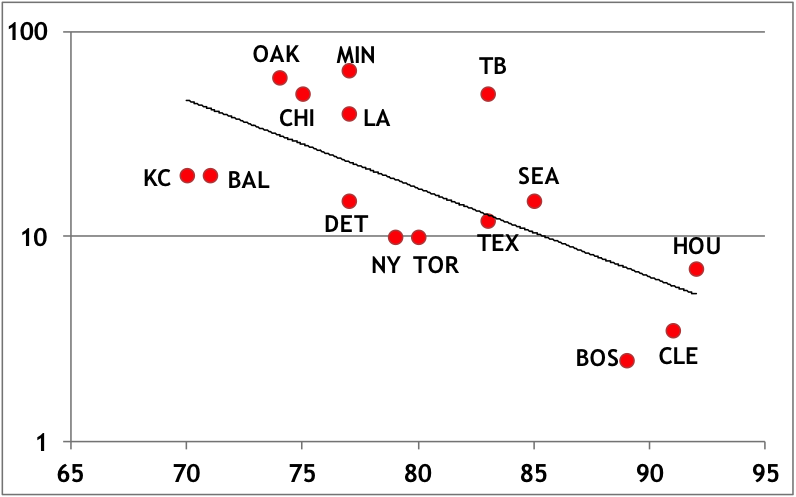 Let’s talk about that trend line. It represents the average relationship between Las Vegas pennant odds and PECOTA wins. So the dots above the line—teams whose odds are longer (a higher number) than PECOTA’s projected wins would suggest—are teams that Las Vegas underrates (or PECOTA overrates, depending on your perspective). The dots below the trend line are teams that Las Vegas overrates (or PECOTA underrates).

I found the following relationships interesting: 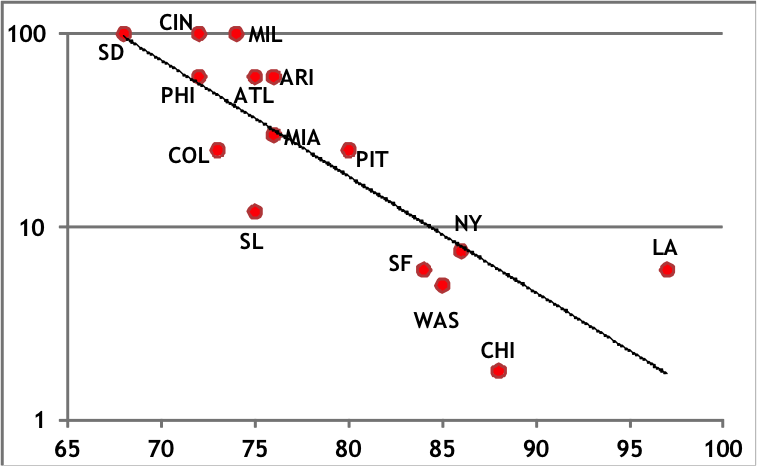 There’s less divergence between the betting markets and PECOTA in the National League than the American League, probably because the National League has a more contender/pretender, stars/scrubs bifurcation. There’ll be quibbles here and there, but I think there are going to be four major controversies:

If PECOTA moves markets, Las Vegas odds-makers who are BP Premium subscribers are going to log in today, check the 2017 PECOTA projections, and say two words, the first of which is “Oh.” Then they’ll change their numbers, as PECOTA will move the markets.

These appear to be the most likely adjustments, based on the divergence between Superbook and PECOTA:

But maybe PECOTA won’t move markets. There could be several reasons for this, none of which impugn the PECOTA formulae. (Yes, we hear you, Royals fans, but this isn’t 2015.)

I’ll check back in a few days and post an update to this article, a BP Unfiltered entry, or, if it warrants, another full article, depending how the odds change.