Picture a veteran oddsmaker grinding away in a smoke-filled backroom, sweating over stacks of scribbled notes between puffs from a cigar. He knows all and trusts his gut feeling to come up with the casino’s lines for each day. That’s a romantic notion we’ve all seen portrayed in movies and on television, but it’s very far from reality these days. If there is a backroom, it’s more likely to be smoke-free and filled with computer monitors and advanced degrees. Analytics, not guts, drive sports-betting lines.

PECOTA’s team projections and Las Vegas’ over/under team win totals generally match up pretty closely, because they’re relying on the many of the same types of things. Of course, every projection system is different—and we like to think PECOTA is both different and better than most—and Las Vegas’ lines also account for public interest swaying action in one direction. PECOTA is simply crunching the numbers to project how many games each team will win, whereas Las Vegas does that while also trying to tempt as close to 50 percent of the action as possible to land on each side of the over/under line.

Online sportsbook Bovada recently released its over/under win totals for 2017, so let’s take a look at how they compare to PECOTA’s team projections. Bovada’s lines all involve a half-win—74.5 or 85.5 or 92.5—because they’re trying to avoid the dreaded push. Six teams have an over/under within a half-win on either side of PECOTA’s projection and a total of 14 teams are within 2.5 wins of PECOTA, so it’s safe to say that the projections and the oddsmakers agree on basically half of the teams. 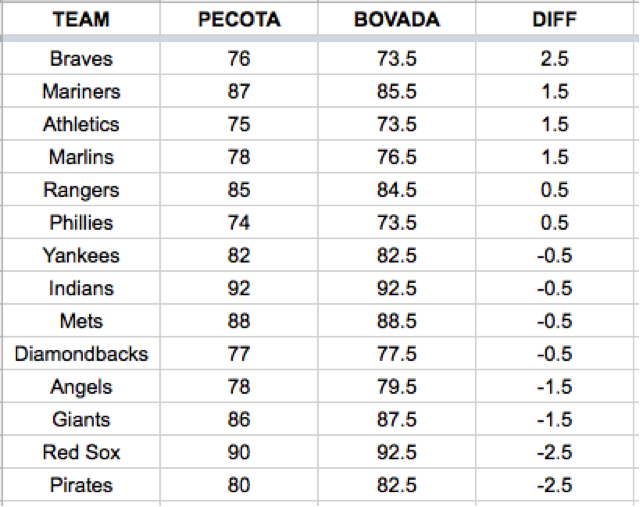 There are some interesting storylines to be found in the above list and the closeness in win totals for those 14 teams could be partially explained by Rob Mains speculating last month that Las Vegas' lines might move toward PECOTA (and other publicly available projections), but let's focus on where the two sides see things differently. That leaves 16 teams with differences of at least 3.5 wins between PECOTA and Bovada, and they’re split right down the middle in terms of being favored by PECOTA and favored by Bovada.

First, here are the eight teams PECOTA is a lot higher on:

For the most part, PECOTA favors the teams that are expected to be really bad. Bovada assigns the four lowest over/under win totals to the Padres, White Sox, Brewers, and Reds—and PECOTA projects all four of those teams to hit the “over” by at least 3.5 wins. None are projected to actually be good or even reach .500, but a regression-heavy system is built to raise the floors and lower the ceilings. Or, put another way: Bovada assigns three teams a win total under 70 and eight teams a win total under 75, whereas PECOTA projects zero teams under 70 and only four teams under 75.

Last week I wrote about how PECOTA projects the Twins to improve by an MLB-best 21 games, and the Rays’ similarly rosey projection was covered by Patrick Dubuque. Minnesota and Tampa Bay certainly qualify as PECOTA favorites beyond any of the regression-driven factors. However, the only two teams favored by PECOTA and projected to make the playoffs are the Dodgers and Astros. And in both cases, Bovada sort of agrees. Los Angeles has the second-highest over/under, behind only the Cubs, and the Astros are given the sixth-highest over/under. Bovada likes them, but PECOTA loves them.

Here are the eight teams Bovada is a lot higher on:

We’ve heard a lot from the fine people of St. Louis, Baltimore, and Kansas City since this year’s PECOTA projections were released, and Orioles and Royals fans could have just copy-and-pasted their complaints from previous years. PECOTA has underrated both the Orioles and Royals on a regular basis, although it’s worth noting that Bovada assigns the Royals the AL’s fourth-lowest over/under. There’s certainly a difference between 76.5 wins and 71 wins, but the general viewpoint of the team is pretty similar.

Bovada isn’t exactly a believer in the Orioles either, giving them an over/under of 80.5 after they won 89 games last season and at least 81 games every season since 2012. PECOTA and Bovada both have the Nationals falling from last season’s 95-67 record, but the oddsmakers think the fall will be slightly less steep. It’s a similar story with the Tigers and Blue Jays, for whom the main difference is whether they will decline by 6-8 wins or 4-6 wins.

Cubs fans looking for something to get annoyed about between World Series DVD viewings can point to PECOTA projecting Chicago for “only” 91 wins, but that trails just the Dodgers in the NL and is 11 games better than any other team in the division. Bovada gives the Cubs an MLB-high over/under of 95.5, which is perfectly reasonable coming off a 107-win season and could also be factoring in a whole bunch of Cubs fans (old and new) wanting to put action on another incredible season.

And then there are the Cardinals. St. Louis went 86-76 last season and has won at least 85 games in 16 of the past 17 years. Last time the Cardinals won as few games as PECOTA projects (76) was 1999, when they were 75-87 despite Mark McGwire hitting .278/.424/.697 with 65 homers. PECOTA sees the Cardinals struggling on both sides of the ball, projecting them 10th among NL teams in runs scored and 11th in runs allowed, thanks in large part to a defense that projects second-worst.

The lack of offense is probably the bigger surprise after scoring the NL’s third-most runs in 2016 and basically replacing Matt Holliday with Dexter Fowler. PECOTA sees Aledmys Diaz coming back down to earth and the 30-something trio of Yadier Molina, Matt Carpenter, and Jhonny Peralta collectively losing production. On the pitching side, PECOTA projects ERAs in the 4.00s for the entire rotation. I’d probably agree with Cardinals fans who think PECOTA is too harsh, but then again Bovada also pegs them for 1.5 fewer wins than last season and their lowest total since 2007.

Here’s a comparison between how PECOTA and Bovada view the best 10 teams: 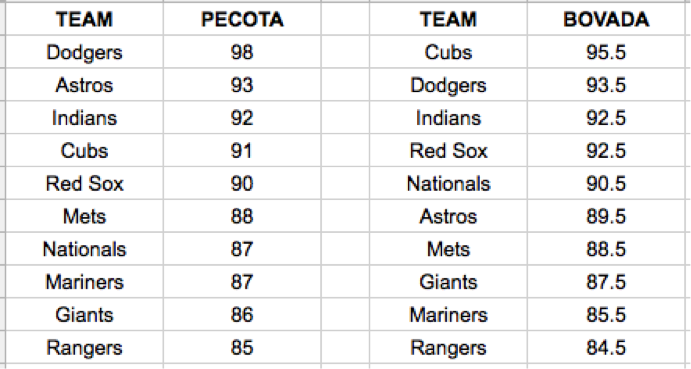 Remember all that stuff about projection systems and oddsmakers relying on a lot of the same things? Both lists have the exact same top 10, just in slightly different orders. They both have the Indians, Red Sox, and Astros as the best three AL teams and the Cubs and Dodgers as the best two NL teams, with the Mets and Nationals third and fourth (or fourth and third).

Here’s a comparison between how PECOTA and Bovada view the worst 10 teams: 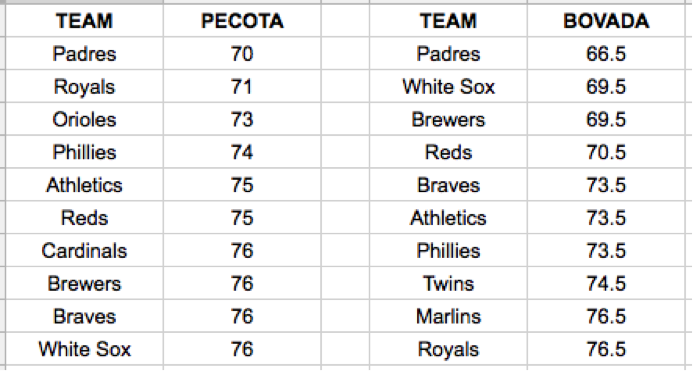 There’s less agreement here, but only slightly, with eight teams cracking both top 10 lists. PECOTA sees the Cardinals and Orioles taking the last two spots, while Bovada thinks it’ll be the Twins and Marlins. Oh, and everyone agrees that the Padres are going to be really, really bad.

You need to be logged in to comment. Login or Subscribe
quackman
Does PECOTA build in anything based on likely trade activity? (i.e., if it projects that a team will be out of contention at the trade deadline, does it project that team to be worse after it?).
Reply to quackman