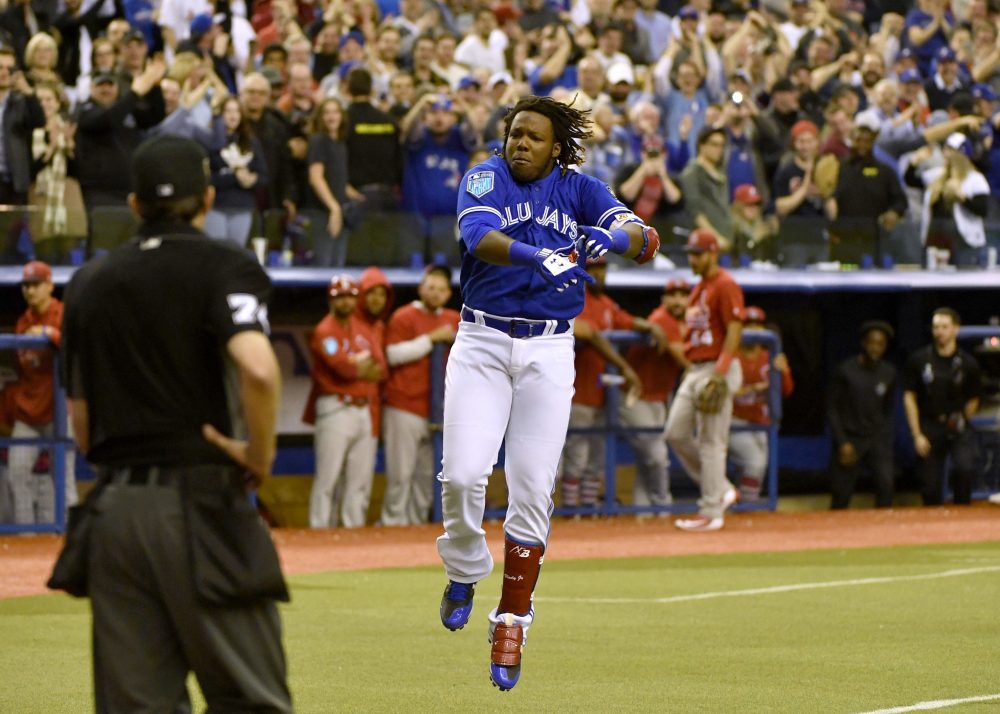 The annual release of the Top 101 prospects is a culmination of sorts. Months of discussion and writing and phone calls and gchats and “what the hell do we do with this guy?” email threads ultimately crescendo in a list—an oddly succinct final product for such a subjective and exhaustive labor.

Before he helped build the Astros into a World Series winner, our former prospect guru Kevin Goldstein referred to these lists as a “snapshot in time.” That holds true: the list would have looked different had we written it in August and would doubtlessly change if we circled the wagons again in April.

But more than that, the 101 reflects a series of choices, often from questions with no easy answers. How can one definitively separate an unknown quantity like Victor Victor Mesa from a battle-tested big-league backstop like Danny Jansen? Would you rather have Nate Pearson‘s practically unprecedented physical gifts or Mike Soroka‘s safer blend of competence and proximity?

A list must answer these questions without presenting the nuances that ultimately shaped the final product. Rest assured, there was plenty of passionate discussion this year, as there is every fall and winter. Each player on this list settled where they did only after considerable debate. Well, perhaps not the first guy; that part was pretty easy.

I should mention that, while the list itself is a difficult project, it’s also an exciting one. This isn’t science homework, after all; we’re ranking and talking about baseball players! If you’d like to hear even more about these players, Jeff is holding a chat later today, and he and Jarrett recorded a 101-specific podcast for your listening pleasure:

In the mean time, pull up a chair and grab a drink. Let’s have some fun.

You need to be logged in to comment. Login or Subscribe
Ross Fortner
It's that time again! Thanks, BP crew, for helping us through these long cold einter months without baseball. Love getting this list and the team top 10's, but we are also blessed with the positional series as well! Keep up the great work
Reply to Ross
Jarrett Seidler
Thanks!
Reply to Jarrett
Edward Price
Um, Matt Manning?
Reply to Edward
Jarrett Seidler
He would've been in a top 125 if we had ranked that far, and is in the same tier with the same Likely/OFP grade as the back chunk of the list.
Reply to Jarrett
batts40
Awesome work as always.
Reply to batts40
bscheidt
Christmas in January! Time to turn the computer around so the co-workers can't see the screen for a while!
Reply to bscheidt
Guancous
Why is Player X rated below Player Y?
Are you on the take or do you just hate my favorite team?
Reply to Guancous
Wilson Karaman
Yes!
Reply to Wilson
Llarry
Now, now, they don't hate your favorite team -- it's MY favorite team that they hate. And how could they rank That Guy higher than That Other Guy?
Reply to Llarry
stephenbawesome
Very interesting list, and I always enjoy the accompanying articles that come out with it. Nice work to all involved.
Reply to stephenbawesome
Jeffrey Cottrell
Thanks again BP. I was wondering how far off Gavin Lux was? I see Tejada at the back end but no Lux. What separates those two?
Reply to Jeffrey
Jarrett Seidler
Not far at all; he was on various earlier iterations of both the 101 and the Next Ten. We just like Tejeda's physicality a little more, basically, but it's well within the fudge factor.
Reply to Jarrett
James Geagan
wow. didn't india had separated himself from bohm by so much
Reply to James
James Geagan
*didnt realize
Reply to James
olatan
Any chance we can get a link to download this listing, please. I am in AL only and NL only leagues that draft three minor leaguers, and I would like to sort them by league.
Reply to olatan
Byron Hauck
1) Copy list. 2) Open Excel. 3) Paste list (Match Destination Formatting). 4) Highlight pasted list. 5) Click Text to Columns button in the Data section of the ribbon. 6) Choose Delimited and click next. 7) Check the box for Comma and click Finish. 8) It's 101 guys: it'd have taken you less than 10 minutes to sort or filter them manually.
Reply to Byron
olatan
thanks a lot... worked great
Reply to olatan
rounding third
It would be great if, at the end of the 2019 season, you could republish this list and indicate what this player did during the season (i.e. moved up/down in system, cup-of-coffee in The Show, promoted to majors to stay, etc.).
Reply to rounding
Samuel katz
Who are some of the biggest jumps for fantasy only prospects?
Reply to Samuel
Malcolm Reynolds
There's usually a dynasty 101 that comes out shortly after the regular 101. iirc, it's usually about a week after.
Reply to Malcolm
Alan Wehr
What does Colin Poche have to do the be on this list, give up 0 runs for whole year?
Reply to Alan
Brandon R. Warne
Not be a reliever.
Reply to Brandon
Jarrett Seidler
This really isn't meant to be snarky: he's a 25-year-old relief prospect, so there's probably nothing he could do to get on the 101. I guess a Josh James-style velocity and stuff bump. Just off of the top of my head since he's one of my dudes, Jonathan Holder was putting up similar numbers a few years ago for what I believe to be similar reasons with a similar stuff profile in the high-minors. He's now a very, very good MLB relief pitcher, but even if we knew what Holder would turn into in the majors, we still wouldn't have ranked him on the 2017 list.
Reply to Jarrett
Pat Folz
It looks like the Red Sox are the only team without a Top 101 guy (or even a guy in the next 10). Just curious, who of their prospects was the closest to making it?
Reply to Pat
Ross Batko
The 101 slot is always reserved for a guy who may be lower currently but has a high potential that could move up quickly if things break right. It's kind of a "calling our shot" type of prediction.
Reply to Ross
Pat Folz
Thank's Russ
Reply to Pat
producer
Interesting that Murray who never even played in the rookie league is a top 101 prospect. How does this compute?
Reply to producer
Ross Batko
The 101 slot is always reserved for a guy who may be lower currently but has a high potential that could move up quickly if things break right. It's kind of a "calling our shot" type of prediction.
Reply to Ross
moondog548
Curious, what's your criteria for qualifying as a prospect?

e.g. is Tyler O'neill not on the list because he's got too much service time, doesn't make the grade, both, either, other?
Reply to moondog548
Craig Goldstein
They use traditional rookie guidelines (at-bats/IP and service time) and I believe O'Neill is over on service time despite being on the button on ABs
Reply to Craig
Will
Hi, this criticism has nothing to do with the rankings, and everything to do with the current UI of the website. It's simply poorly designed, and makes it too hard to find associated articles. Perfect example: the hyperlinks for each prospect & team on the list are borderline useless. It stands to reason that anyone reading this article might want to read the detailed prospect write-up from the team Top 10s. And yet! If I click on the player's name, I am taken to the players page. Which is fine, except that there is no way to navigate to that write-up from the player page. Then I have to scroll down 90% of the length of the page and click on some size-6 font titled "here to see articles tagged with ." Then I have to sort through a list of 9 or more articles to find the team's top-10 list. This is too much work! Similarly, when I click on the team hyperlink, WHERE THERE ARE NO LINKS TO THE TOP 10 PROSPECT LISTS.

I love the content, have been a subscriber for years, but I find myself visiting the site less and less, simply because there seems to be no coherent organization of the home page, and it's too hard to find what I want to read. This isn't hard!
Reply to Will
Craig Goldstein
The home page has Top 10s in the box below the main image and there is a prospects tab with a link to a Top 10s homepage that links to every list that's been published.
Reply to Craig
bkverve99
To that, I would add that the site's abysmal re-design has resulted in browsers printing every URL, unless we inspect each page and add HTML code ourselves. It's been years since the "remember me" function at login worked.
Reply to bkverve99
Will
Thank you Craig, I'm aware of the alternative paths to find the lists. My criticism is specifically referring to navigating from this page. Put yourself in the shoes of the reader. I'm scrolling down the list and think to myself, "oh I want to read about Jo Adell" I've got to leave the 101 list, make a few clicks, then come back. Before you know it, I've spent 50 clicks reading up on 15 players. There's a reason why Amazon added the 1-click buy now button. More clicks mean more frustration for customers. Linking to the prospect write-ups in the top 101 prospects would be a significant user experience improvement.
Reply to Will
Mac Guyver
Put another way, there are other sites that can provide the information with less work by the user. The problem with this excellent feedback is that Craig probably doesn't design the website!
Reply to Mac
Henry Blizzard
Any idea where Yusei Kikuchi would be if a prospect?
Reply to Henry
Jarrett Seidler
It's tough to place him because he's really not at the same point in his professional career as any of these guys. The closest guy would be Josh James, I guess, and I'd take Kikuchi over him, so if we were forced to rank him it'd be somewhere in the top 50. But there are plenty of reasons we don't rank established NPB veterans as prospects.
Reply to Jarrett
Hank Sager
Late to the party here but have a question as I look at FV / OFP grades on team pages vs the 101 ranking.
It seems that by and large there is a fairly consistent adherence numerically downward on the 101, with a few exceptions, and relatively minor (Alex Reyes and Dustin May as 70/60 mixed among the 70/55s, Brandon McKay at 60/50 above a couple of 60/55s). otherwise the grades are largely in order.
But 2 stick out - Jesus Sanchez at 60/50 and #32 well above others with same (in mid 40's), and Garrett Hampson, the only 55 FV (55/50) in the top 101 with about 20 60/50s that are on the Just missed or beyond list. I'm sure the reason is related to a bigger group in on the 101 decisions, but just curious. Not insisting on strict consistency of course.
Reply to Hank
Jarrett Seidler
We *try* to stay internally consistent with those grades (perhaps too much), but sometimes we get better information or a better handle on the player in between when different lists lock. It's rarely more than a half-grade.
Reply to Jarrett
Gary Mateus
Any updates to this list?
Reply to Gary