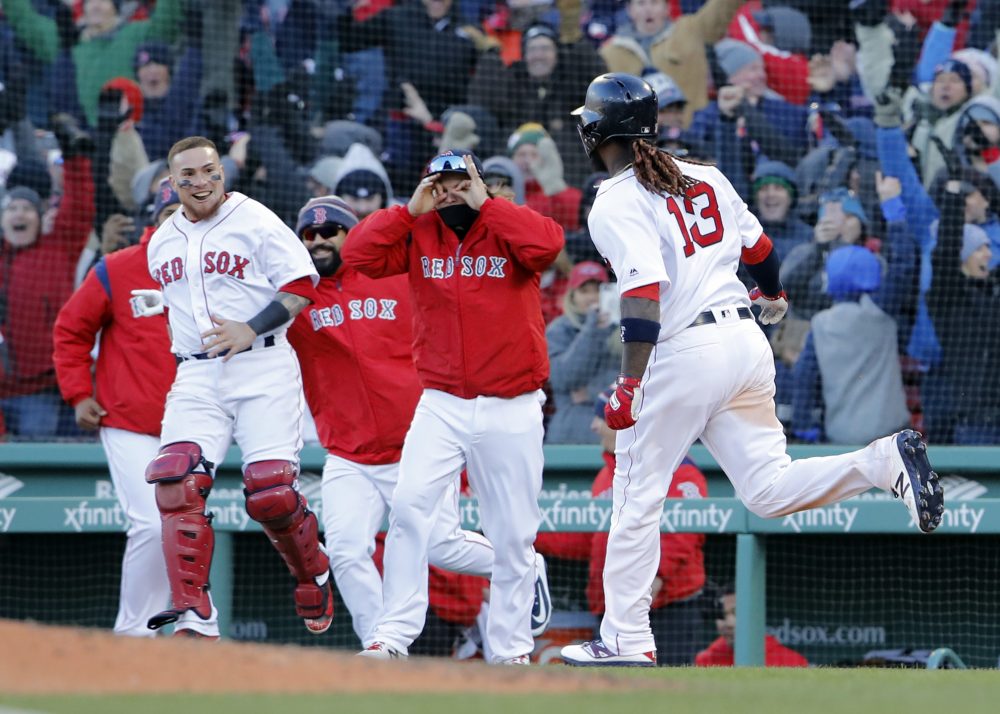 Going into the ninth inning Thursday of Boston’s home opener against the Rays, the story was going to be the journey that Tampa Bay’s Matt Duffy took to becoming the presumptive hero of the day. Duffy lost the entire 2017 season due to an Achilles injury and he hadn’t hit a home run in a game since August 28, 2016.

On April 5, The Duffman (yes, that’s officially his nickname) returned to power and delivered the boom at Fenway Park. Duffy saw a sinker from Carson Smith and promptly deposited it into the batter’s eye out in center field for a two-run shot that broke a scoreless deadlock and put the Rays in the lead in what we figured was the dying embers of the game.

For about half an hour, it sure seemed like it was going to be Duffy’s day and he would be the man of the hour. Instead, the Red Sox made sure to remind us all that you have to get 27 outs to win a game during the first nine innings and they made it as hard as possible for Tampa to get that 27th out.

After Tampa Bay’s pitching staff kept Boston’s bats quiet for most of the afternoon, the Red Sox finally sprung into life at the expense of closer Alex Colome. The first three Boston batters in the ninth reached base safely, with Hanley Ramirez delivering an RBI single that finally put the Red Sox on the board. Still, it seemed like the Rays were going to escape after Colome induced a double-play ball. Finally, some outs.

In fact, Colome was one strike away against Xander Bogaerts from spoiling Opening Day at Fenway. But Bogaerts got a hold of a cutter low and in the zone and hit one off the scoreboard that just eluded the glove of Mallex Smith. The runner from third easily scored and Boston was fully in business.

In fact, Boston had a chance to win it  when they loaded the bases. Daniel Robertson fielded a tough ground ball and instead of taking the easy out at second, he took his chances with trying to throw Jackie Bradley Jr. out at first. It almost backfired!

Fortunately for Robertson, the throw barely beat Bradley to the bag to end the inning—but it didn’t end Tampa’s woes for the day. They left the bases loaded in the 10th and didn’t come close to threatening to score from that point forward.

Red Sox bats came to life again in the 12th. Bradley Jr. led it off with a double then made it to third base with a sacrifice fly. This eventually led to Hanley Ramirez returning to the plate. Hanley was the one who put the Red Sox on the board and he was also the one who ended up finishing the game.

The win continued a trend of extra-inning heroics for the Red Sox, and it also spoiled what was supposed to be Duffy’s day. Instead, the hero was Hanley and the Fenway faithful left the ballpark in jovial spirits.

It hasn’t really been a good week for the Nationals. After they got off to an undefeated start, they suffered a bit of a shocking series defeat at the hands of the Braves, and their home opener against the Mets didn’t exactly go as planned either.

Things started well enough for Washington as they had a 2-1 lead after three innings. Those two runs ended up being all of Washington’s offense for the day, but the Mets were only getting started. Yoenis Cespedes homered in the fourth to tie the score, Michael Conforto went deep in the fifth to give the Mets the lead (both homers were off Stephen Strasburg) and Jay Bruce capped off New York’s power surge with a grand slam to right to make it 8-2. Say hello to your first-place New York Mets!

Elsewhere in the NL East, Gabe Kapler made his home debut in front of the always calm and totally reasonable Phillies fans.

Gabe Kapler greeted by boos at the home opener pic.twitter.com/Q56sdPdepd

The boos were few and far in between though, as the Phillies ended up cruising to a 5-0 victory over the Marlins. Nick Pivetta was the star of the show here as he went 5 2/3 innings and struck out nine—including a stretch where he struck out five Marlins batters in a row.

Going into his start against the Pirates, Homer Bailey had done well at PNC Park. Over 10 starts, he had an ERA of 2.48. Even if things were going badly for him beforehand, a trip to visit the Pirates was always the tonic for Bailey. This was not the case for his 11th career start at the beautiful ballpark in Pittsburgh, as Gregory Polanco racked up three RBIs in a 5-2 victory for the Pirates. Polanco drove in two of those runs with this solo shot to the lovely shrubbery in center field.

Adrian Beltre already has more than enough accolades needed to easily saunter into the Baseball Hall of Fame, but now he’s got another feather that he can add to his cap (but please don’t try to remove that cap). After hitting a double in the top of the second, Adrian Beltre became the career leader in hits among Latin American players:

If all goes well, he’ll likely pass Ichiro for career hits among foreign-born MLB players, so this will be a year of royalty for one of baseball’s Hit Kings.

There are bad omens, and then there’s what happened to James Paxton during the pregame festivities at the Twins’ home opener. Like a pro wrestler who’s frustrated with his position on the show’s card, the bald eagle brought in for the playing of the Star-Spangled Banner went off script and went into business for themself.

We don’t think that’s how they drew it up in rehearsals… pic.twitter.com/aW8IGaNCVy

Paxton tried his best to defy those omens and proceeded to have a good start as he struck out seven, and only walked one over five innings and 98 pitches of work. Unfortunately for Paxton, his final pitch ended up getting crushed by Miguel Sano for a two-run home run that tied the score, and the Twins won 4-2.

While the Cubs were in Milwaukee and soon to put the boots to the Brewers in an 8-0 victory in the comfort of a domed stadium, the White Sox were at home in the afternoon in Chicago, braving the elements of a mean winter that refuses to release its icy clutches on the Midwest. The temperatures were frigid and both the White Sox and Tigers had to deal with intermittent snow flurries but that didn’t stop them from warming up the scoreboard to the tune of a 9-7 contest.

This included the Tigers coming back from being down four runs in the seventh inning and three runs in the ninth. It also included a two-run homer from Niko Goodrum (a good time to hit your first career dinger!) and a game-tying double from Victor Martinez to send it to extra innings, which is where the Tigers would ultimately prevail and complete their comeback.

As all of the cool and hip kids would say on the internet when someone is doing really good, Trevor Story was in his bag on Thursday afternoon. First, he showed off his vertical leap with this jumping catch on what would have been a looping base hit.

Then, with the Rockies nursing a 3-1 lead in the bottom of the ninth (after scoring all of those runs in the top half), Story turned what should have been a cheeky infield single into a crucial first out of the ninth.

If you haven’t gotten your fill of seeing baseball played in frigid temperatures while the players themselves try their best to stay warm in the face of the bitter cold, then don’t worry! The Colorado Rockies host their home opener today against the Braves (4:10 p.m. ET) and, as of the time I wrote this, the forecast calls for temperature in the 30s with a chance of flurries at some point. German Marquez and Brandon McCarthy couldn’t have asked for more perfect conditions to pitch in!

Speaking of home openers, Cleveland also finally get their home slate underway after spending the first week of the season on the West Coast. They’ll be hosting the Royals, and Carlos Carrasco will be on the bump for Cleveland. Carrasco had an excellent season last year (3.36 DRA, 79 cFIP) but he’ll also be looking to bounce back after getting knocked around a bit by the Mariners during his first start of 2018 (4:10 p.m. ET).

Finally, if you’re looking for a night cap then you should look no further than the Golden State, since four out of the five teams located in California will be facing each other. The Athletics will be travelling to the Big A to face off with the Angels (10:07 p.m. ET), while the Giants and Dodgers will renew their heated rivalry at AT&T Park (10:15 p.m. ET). Both of these teams played each other last week, so if you’re a subscriber to the theory that familiarity breeds contempt, then maybe we’ll see some of that as these teams get familiar with each other for the second time in as many weeks.