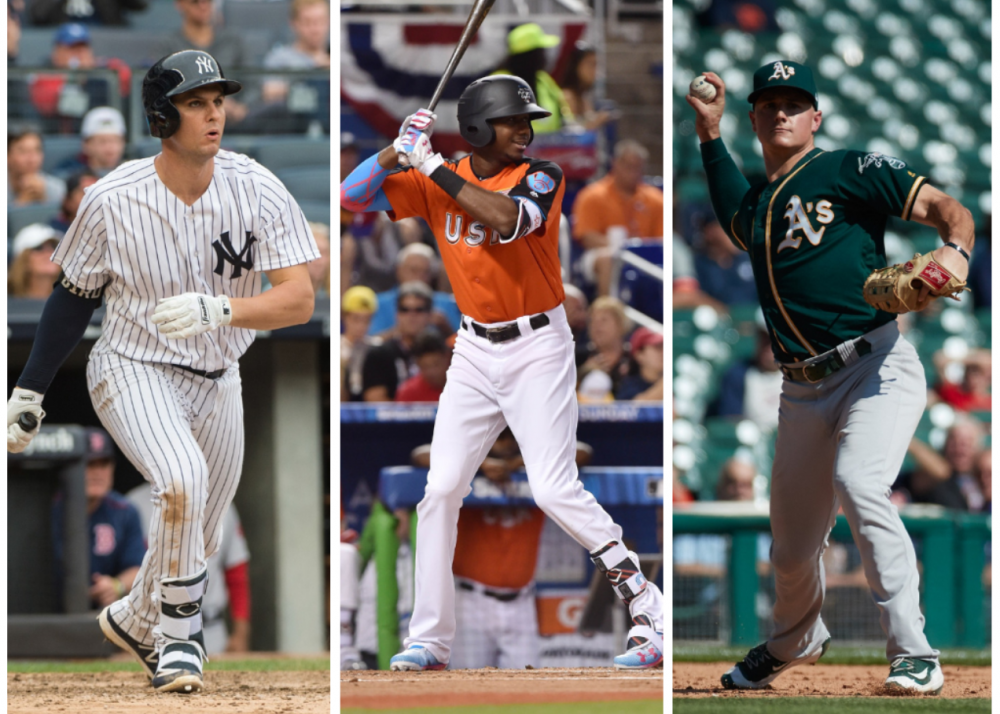 Chosen under the guidance of PECOTA’s projections and same-age player comps, here are 10 hitters who stand out as prime breakout picks in 2018.

Shoulder surgery knocked out Greg Bird for all of 2016 and foot surgery sidelined him for much of last season, but he returned with authority in late August and quickly earned manager Joe Girardi‘s trust in the middle of the lineup. Girardi is gone now, but the Yankees remain committed to the 25-year-old at first base and PECOTA projects him to be one of the AL’s top sluggers in his first full season. Bird hit 20 homers in his first 94 games as a major leaguer after totaling 22 homers in 125 games between Double-A and Triple-A. PECOTA thinks 30 homers is well within reach, and Bird’s top seven same-age comps include Brandon Belt, Justin Morneau, Joey Votto, and Paul Goldschmidt.

For the Marlins fans—assuming such a creature still exists—reeling from a brutal offseason, PECOTA is here to offer a small sign of hope: It loves Lewis Brinson. Acquired from the Brewers in the Christian Yelich trade, Brinson ranks 18th on BP’s top 101 prospects list and PECOTA projects the toolsy 24-year-old center fielder to be the best rookie in baseball. He struggled in a 21-game debut last season, but the former first-round pick has hit .349/.409/.574 in 107 games at Triple-A. Even after accounting for very hitter-friendly Triple-A environments, PECOTA sees Brinson as a potential top-10 center fielder with 25-homer power and plus defense.

I’ll abide by the The Calhoun Scouting Report Act of 2015, which stipulates that any write-up of Willie Calhoun must mention these three things:

That first thing is a fact, and one that makes it difficult to find reliable comps for Calhoun’s profile as a slugger near the bottom of the defensive spectrum. Those last two things are at least up for debate, but PECOTA agrees very strongly on both counts. Defensively, he projects as a terrible second baseman or a bad left fielder (or maybe a designated hitter). Offensively, at the 50th percentile he’s knocking on the door to a .500 slugging percentage and at the 70th percentile he’s making Dodgers fans scream about the Yu Darvish trade.

Matthew Trueblood wrote a two-part series about watching all 30 starting third basemen to analyze their defense and he was already convinced Matt Chapman “has a legitimate case to be called the best defensive third baseman” just three months after his call-up. The numbers agree, as Chapman racked up 12.6 FRAA in 84 games as a rookie, and PECOTA projects him as plus-18 in 2018. That level of defense makes someone a star even if they barely hit, and as you can see by Chapman’s comps there are big questions about his contact skills. However, he’s also projected for 32 homers and … well, if you catch everything and hit 30 balls over the fence, you’re a star as long as your batting average starts with a two.

I sang Yandy Diaz‘s praises as part of my Quadruple-A All-Stars last season, but was hesitant to include him here because he’s 26 years old and doesn’t have a clear path to playing time in Cleveland. However, once PECOTA spit out a .374 on-base percentage that was enough to snag a spot. Diaz has posted OBPs of .396, .403, .408, and .454 in four minor-league seasons, including .419 in 184 games at Triple-A. His power is limited, but PECOTA thinks his glove is decent at third base and he got some reps as a corner outfielder last season. He’s lacking in upside compared to the other names on this list, but Diaz stands out as an above-average regular simply waiting for an opportunity to prove it.

He struggled in his first crack at the majors and his strikeout-to-walk ratios in the minors aren’t pretty, but PECOTA is convinced that Austin Hays can hit and hit for power. Hays reached Baltimore just 15 months after being drafted in the third round, sprinting through the minors by hitting .330 with 36 homers in 166 games. He also drew a grand total of just 36 walks, which is a potential red flag. PECOTA isn’t convinced that Hays will control the strike zone—his top comp is free-swinging Orioles outfield-mate Adam Jones and his top 10 also includes hackers like Jeff Francoeur and Oswaldo Arcia—but a projected .482 slugging percentage for a 22-year-old rookie speaks for itself.

There are two ways to look at Nomar Mazara. One is that he’s shown little improvement with mediocre, nearly identical numbers in 2016 (.266/.320/.419) and 2017 (.253/.323/.422). The other is that simply holding his own in back-to-back MLB seasons at 21/22 is generally a strong indicator of future success. In the past decade, the only other outfielders to qualify for a batting title twice by 22 are Mike Trout, Giancarlo Stanton, and Justin Upton. Mazara doesn’t really belong in that company, but the larger point is that players who’re decent at 21/22 tend to be pretty good by 25/26. PECOTA sees Mazara taking just a small step forward in 2018, but also gives him one of the AL’s highest “breakout” rates.

Yoan Moncada stumbled out of the gates, batting .136 with 29 strikeouts in his first 17 games, but he recovered to hit .264/.354/.453 with seven homers and 21 walks in his final 41 games as a 22-year-old. He still struck out a ton, and even as a prospect questions about Moncada’s contact skills led to debates over his long-term upside. Andy Marte as a top comp is scary as hell and PECOTA projects him to hit just .233 with an cringe-inducing 182 strikeouts, but that comes with 20 homers, 21 steals, 68 walks, and above-average defense at second base. If he can maintain a batting average above .250, it’s easy to see how a tool set containing Moncada’s speed, athleticism, strength, and plate discipline can make him a star.

Jesse Winker showed great on-base skills in the minors, hitting .298 with a .398 OBP and nearly as many walks (330) as strikeouts (385) in 566 games, including an OBP above .375 in each of his six seasons. He also bounced back remarkably well from a 2014 car accident that left him with a torn wrist tendon, but Winker’s already modest power all but vanished following his return. That is until his first taste of the majors last season, when Winker smacked seven homers in 121 at-bats, slugging .529 to go with the usual .375 OBP. It’s possible that power display was a small-sample fluke, and PECOTA is skeptical in projecting 14 homers, but it wouldn’t take much more than that to make Winker an impact hitter.

PECOTA has serious doubts about Bradley Zimmer‘s contact skills—his batting average doesn’t rise above .250 until the 80th percentile—but the 25-year-old center fielder’s size/speed combo is tough to ignore. Sprint Speed pegged him as MLB’s third-fastest player last season, behind only Byron Buxton and Billy Hamilton, and he posted 9.6 FRAA in 101 games. Yet he’s 6-foot-5, which is taller than all but three regular center fielders in baseball history (Dexter Fowler, Alex Rios, Von Hayes). It’s possible that his hit tool will always hold him back, but in the meantime PECOTA projects Zimmer as an above-average center fielder with plus-plus defense, 30-steal speed, and 15-homer power.

You need to be logged in to comment. Login or Subscribe
Brian Thornber
Those Moncada comps aren't scary, they are terrifying.
Reply to Brian
Rosevear House
I've come back here in 2019, and one hand you can say it missed on them being breakouts, but on the other it got the comps spot on..
Reply to Rosevear