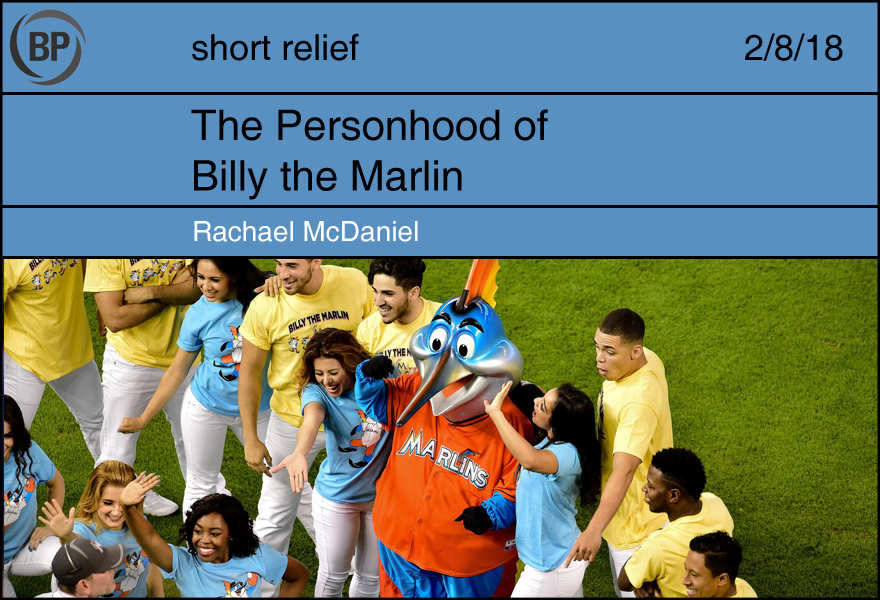 In the midst of their already-historic fire sale, the Miami Marlins recently announced that yet another head was rolling: The man who had, to that point, worn the suit known as Billy Marlin had been terminated from his position. While it was already sad and disturbing to see yet another (possibly?) beloved Marlin departed during this offseason, especially someone who had reportedly been in the mascot role for 14 years, the announcement contained a yet more disturbing qualification. The Marlins, the tweet specified, were just firing the human being who wore the Billy Marlin suit. They were not firing Billy Marlin himself.

I had to read this a few times to wrap my head around it, and I first reached the conclusion that this specification that they weren’t firing Billy Marlin, just the man who played him, was some kind of joke. This seemed quite a cruel thing to do when announcing the forcible end of a man’s 14-year career, and I was disturbed by the Marlins spokesman’s attempt at levity in this situation. Just because the man’s job was to wear a smiling, rotund anthropomorphic marlin suit doesn’t mean he’s not a human being with feelings, after all.

But soon after, an even more disturbing thought struck me: What if the spokesman wasn’t joking? What if the suit known as Billy Marlin actually possesses some personhood unto himself that necessitated the specification that he wasn’t being fired? If Billy Marlin is an autonomous person, for what purpose does he require another person wearing him? One imagines the horror of stepping inside what you believed to be an inanimate suit, only to find the that the suit is alive—that you are wearing the skin of another conscious being—that the being is, itself, all skin with no interior. One imagines the conflict that must arise from occupying that role, the conflict of wills. One imagines an empty suit with a shiny, grinning marlin head, crumpled on the ground, unmoving—and yet speaking and thinking, all the same. Pondering. Plotting, even. We do not know what might go on in the mind of a creature like Billy Marlin.

If this is the case—if Billy Marlin is, indeed, a person unto himself—one wonders whether he’s on the Marlins payroll, and ownership just decided to cut costs by eliminating the middleman… or whether he is some unknowably powerful entity who cannot be fired by the Marlins for fear of his boundless wrath. I don’t know what the truth is, and I’m honestly afraid to think about it much more. 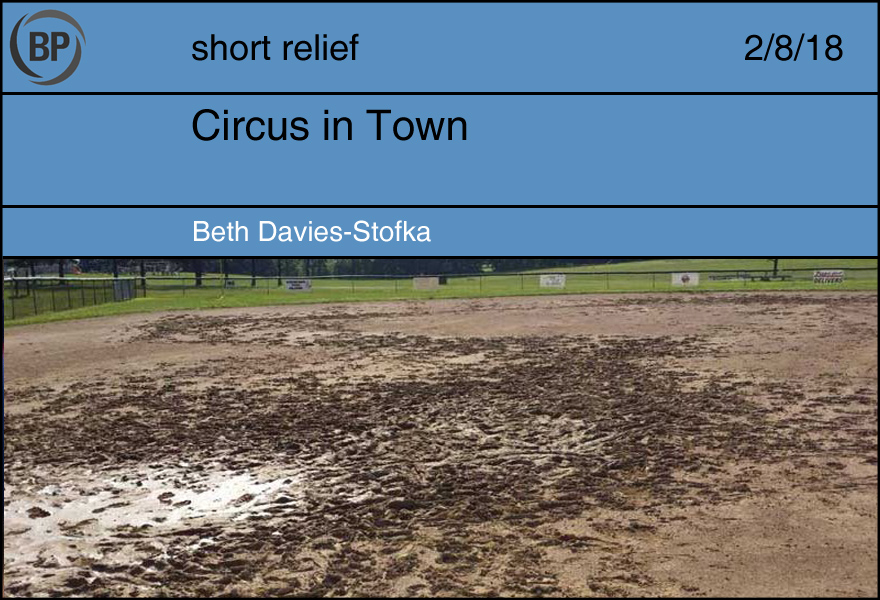 Even the covered seats were snowy, but October baseball can’t be postponed. The grass held an inch of snow and three innings in, the muddy basepaths were brittle with frost. This was no showcase for elite athletes, yet there they were, trying to play professional baseball.

The pitchers didn’t mind if Bosco sat near them in the dugout. He was a quiet guy. Every groundskeeper had made the crew because they knew somebody, but in Bosco’s case, it was the family business. He was a groundskeeper like his father, who had followed his father. Bosco’s great-grandfather had been the first, and had even seen Barnum’s circus pitch its tents here.

Sounds are magnified by the silence of snow, so when the two guys collided at second base everybody in the park heard it. It put Bosco in mind of Rocky punching the meat. Both guys had slipped but only one got up. The other guy lay there, eyes closed, the snow spattered crimson.

As Bosco watched, the monkey paced anxiously to and fro near the body. The lion, tiger, and zebra stood in a half-circle around the guy, nudging him and muttering worried and encouraging sounds. The giraffe stood alert in the background, ready should her soft nose be needed. Don’t worry, the bear seemed to say, pawing at the guy’s shirt while carefully keeping her claws from snagging it.

Then the elephant slipped her trunk around the player’s shoulders and gently sat him up while the fans yelled their appreciation and support.

Much relieved, the manager and trainer helped him to his feet and took him to the clubhouse to ice his broken nose. 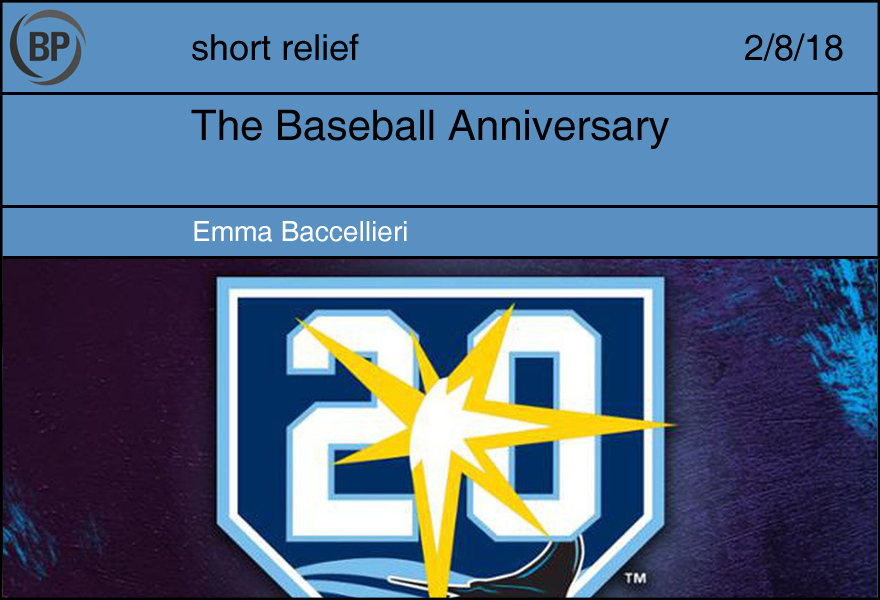 The Rays are celebrating their 20th anniversary this year. The Marlins, their 25th; the A’s, their 50th. They are all honoring the occasion, more or less, the same way—a commemorative logo, a promotional calendar, a special weekend. It’s a decent enough way to celebrate an anniversary. But it’s not the right way, at least not if one is interested in following the traditional guidelines for annual anniversary gifts. Paper for year one, cotton for year two, all of that old stuff. If that sounds old-fashioned, fine; the Chicago Public Library has very helpfully compiled a list of modern updates to these guidelines. Here is how teams should be celebrating their anniversaries:

Colorado Rockies, founded 1991: Now, this one only works if you’re willing to measure the relationship from the time of the first meeting, rather than the time of the first date, as the franchise was given the green light in 1991 but didn’t begin play until 1993. But if the Rockies want to mark time like that, then they’re in luck, because that would mean they’re celebrating the sculpture anniversary, and it just so happens that the Marlins have a fantastic sculpture that they’d apparently very much like taken off their hands. A gift, no trade package expected back in return—how generous.

Seattle Mariners, founded 1977: The land anniversary would be a big one for many teams, assuming that there would be a possibility of some local tax money attached to build a stadium on said land. But the Mariners can find some other uses for their 41st anniversary gift: some space to send injured starting pitchers and busted prospects out to pasture?

Texas Rangers, founded 1972: There’s a case to be made that the most difficult anniversary to celebrate appropriately is the 60th, as diamonds aren’t exactly easy to come by, or that it’s the 48th, as knowing which “optical goods” will best suit someone is always such a struggle, but the real answer is the 46th. The original poetry tribute anniversary. Something like this, perhaps.

You need to be logged in to comment. Login or Subscribe
Jeff F
Firing the guy in the mascot suit - I feel sorry for anyone in Miami who thought Loria was the lowest possible bar. This ownership group is gonna trash Jeter's reputation.

I just wonder why the guy was fired. Was he exposed by #MeToo? Does someone have pictures of him and the outfield sculpture? Did he show up at the Marlins Xmas party stuffing fish fillets into his Santa outfit (a la Trading Places)? Enquiring minds want to know.
Reply to Jeff
Llarry
Fair chance they just decided they could stuff someone cheaper into the fish suit and no one would notice. Would show a total failure to understand the character value a good mascot brings to the fan experience.
Reply to Llarry