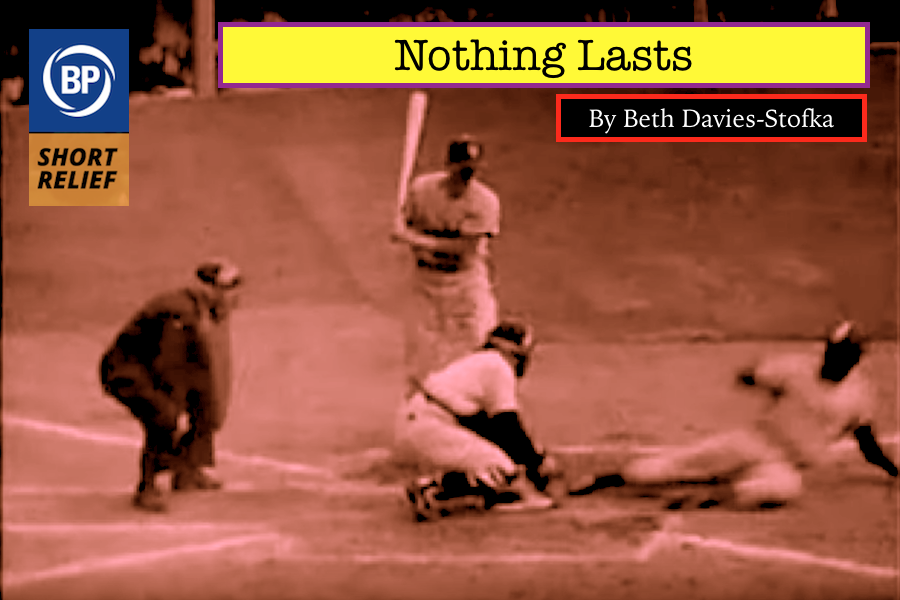 For six years, you stood outside the shop windows on Flatbush Avenue to see them play. Under the covers, you read and reread last week’s tattered copies of The Sporting News, the ones that the barber gave you after the new ones were delivered. Later you had your little transistor radio under your pillow. You listened to WMGM after that heavy hand hit you, after she spilled that pot of boiling water on your legs. You listened after the beating from the paddle, when you handed in your unfinished homework. The teenagers at the pizzeria talked about the Dodgers all winter long. You swept the floors and hung on every word.

They finally won it all, and then you hardly minded the angry kitchen when you went home. You’d been forced to surrender nearly everything you’d earned to pay for the alcohol that made her mad, but you’d hidden away enough. You spent it proudly on a pennant. You were elated by your Dodgers, the club that never stopped trying to win. You gave them your heart and everything in it. They were the team that wiped away your pain; Amorós’s improbable catch, Hodges and his two RBI, Podres’ complete game. For the first time in your life, you knew who you were. You wore their cap. You were their fan.

That’s when they left. At first you couldn’t believe it, but the agony of the borough helped you understand. You meant nothing to them. You were invisible. It was your soul that they ripped through on their way out of town. You thought that they were home and family, but that was wrong. You were just a visitor to them, so when they left, they left you behind. At home, brokenhearted, the hands on you were heavier, the welts more painful, the radio, silent. You put the cap inside the pennant. You rolled it up and stored it carefully, in a bag.

Next time the yelling started, you yelled back. The heavy hand was heavier, but you hit back. Then you left. In the Bronx, from beneath a dumpster behind your building, you heard a kitten cry. You rescued the tiny thing; at home, you bottle fed him and gave him a bath, before he climbed inside your shirt and went to sleep. You waited around that dumpster for a month, hoping his mama would show up, but she didn’t. So you bought him toys and food. Now you sleep together at night, safe and uninterrupted. You named him Yogi. 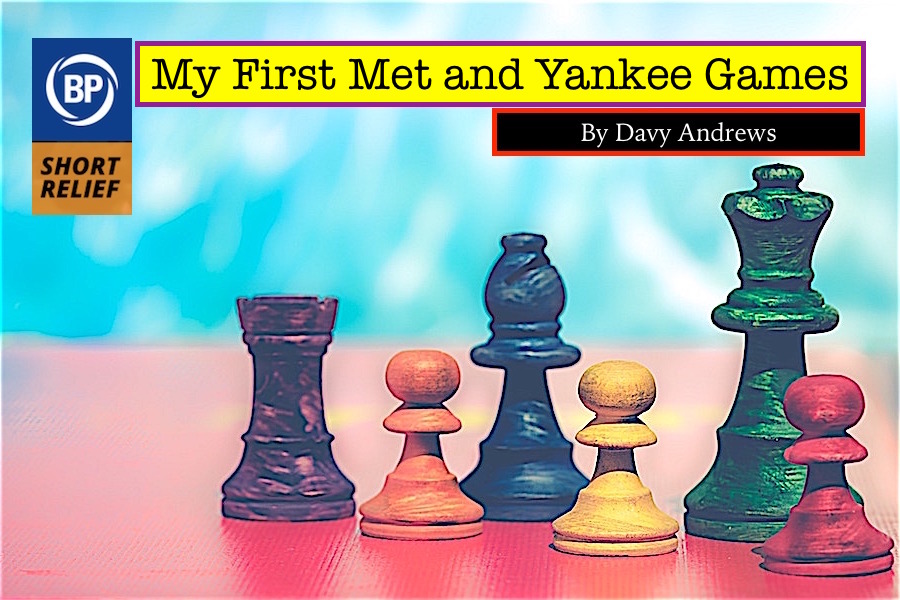 I spent Thanksgiving at my sister’s house in California, playing chess with a five-year-old.

I mean, we did other things too. My sister has three young children, so there were games and tickling and baking and plenty of tears. But my parents got in early and, amazingly, my dad taught my nephew the rules of chess. We played a couple games and I repeatedly — as they say in my sister’s house — kicked his trash.

My nephew isn’t old enough to learn about tactics, but I did impart a quick lesson about high variance strategies to my niece. If somebody’s better than you, says a chess book I read once, then a normal game will favor them every time. An unpredictable game could throw them off. Take risks, attack them in surprising ways, make them uncomfortable; that’s how you beat a superior opponent.

This is all by way of saying that when I was thirteen and I saw a woman on crutches hop out of a van and join a brawl in the parking lot of Shea Stadium by whacking somebody with one of those crutches, one reasonable reaction would have been to applaud a particularly brazen example of an unpredictable attack. I can only assume that Miss Crutch-Beater was a world class chess player.

That was my first baseball game in New York City. The second came ten years later. I was seated in the right field stands of Yankee Stadium, next to a friendly old lady in David Ortiz t-shirt.

The details of the game escape me. What I do remember is that at one point my kindly elderly neighbor stood up to cheer for David Ortiz. I want to stress that she wasn’t cheering loudly or obnoxiously. She was just a nice, death-adjacent person cheering at a reasonable volume for her favorite player. So we were all a bit surprised when a guy a few rows down turned around and told her to shut up and go back to Beantown.

Let’s take a moment to acknowledge that Beantown is a really weird nickname for a town. It’s much weirder than the Big Apple. The Big Apple sounds like a nickname. Beantown sounds like the name of an actual town full of fiber and protein. Or a little town upstate that has leaned further into its quirky name over the decades and now has a bean museum and gift shop. Or a town in a children’s movie peopled with adorable little anthropomorphic beans that say things like, “Don’t forget to eat your beans!” and then laugh so hard they fall over.

Anyway, this man heard a wobbly voice encouraging the lovable David Ortiz to hit a baseball, turned around, saw a kind septuagenarian, and decided that, tactically, the best course of action was to shout, “Shut up and go back to Beantown!” At the very least, it was an extremely surprising attack. I guess New York is just full of chess players. 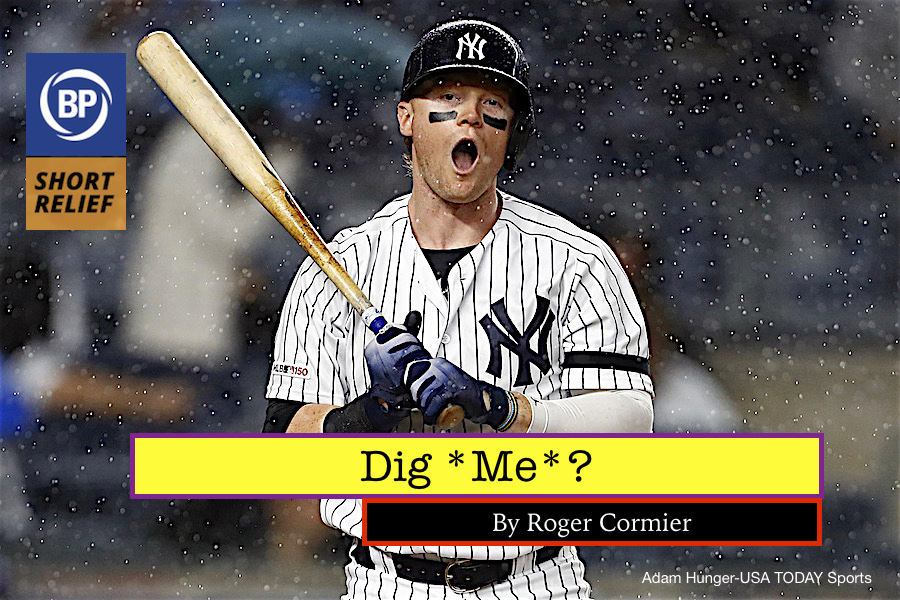 On the evening of May 28, 2019, both New York baseball networks unknowingly teamed up to provide its viewers with an education on the mental preparation of athletes.

First, as Yankee outfielder Clint Frazier was grounding out to second to bring his team closer to a loss to the San Diego Padres, YES’ Meredith Marakovits reported on the suspected etymology of Frazier’s recent hot streak. It was really an excuse to drop the term “dig me video” and to ask analyst Paul O’Neill if he had ever heard of those, knowing the answer would be “No, that reeks of millennial.”

In O’Neill’s defense, I had never heard of that phrase either until that moment, but to boomerang the credit right back my way, I correctly determined what a “dig me video” was as soon as I heard the term, proving sometimes assuming is more of a time saver than a bad habit.

The running time of The Irishman later, SNY returned from commercial during their Mets-Dodgers broadcast with a Steve Gelbs report on J.D. Davis. Did you know that once Davis finishes watching video on upcoming opposing pitchers he treats himself to a collection of clips where he’s doing nothing but smacking the ball good? Analyst Todd Zeile had never heard of such a thing.

Unlike Frazier, who watched a highlight reel of himself online that a fan put together, Davis made his dig me videos on his own, or tasked some bemused video editor to do it. Davis also didn’t call them “dig me videos” — his Astros teammate Brian McCann came up with the term “taste round.” I had never heard of a “taste round” either, and if I didn’t have the context beforehand from Gelbs my guess would have probably been embarrassing, making me sound both old and hungry.

After Gelbs’ report, I vaguely remembered reading something about Hanley Ramírez in an Eno Sarris article back in March. When Sarris asked him about seemingly unorthodox approaches players might have practiced in order to keep a positive attitude, former Marlin catcher and current Cubs mental-skills coordinator John Baker relayed the following:

“So I was in the video room with Hanley and I look over, and he’s just watching himself hit homers. So I ask him, ‘Hanley, are you only watching yourself hit dongs?’” Baker said. “And he says ‘Yeah man, looks good.’ So I go back to my video work and I look over later and he’s watching the other pitcher only give up home runs. ‘Hanley, are you only watching the pitcher give up dongs?’ And he says ‘Yeah, man, all I do is hit home runs, and all he does is give them up!’”

Ramírez’s extra step of mentally undressing his enemies makes it the most savage mind hack I have ever read, and likely will ever read. But, while it is possible Brian McCann heard about division rival Hanley’s approach and passed off “taste round” as his own, it appears Ramírez never gave a name for his videos, so he loses some points.

I figured after that night that this was a generational thing, like everything these days. Baker and Hanley were Marlins teammates for four seasons beginning in 2008, four years after Zeile retired, and seven after O’Neill. Hanley Ramírez must have invented and perfected the hitter’s art of getting the mind right before first pitch.

Except… six weeks ago, Alex Beith shared a 1987 Reggie Jackson profile by David Remnick in the Esquire Classic newsletter. Here is a paragraph from that excellent piece. No bolding necessary — you’ll know it when you see it:

REGGIE DROVE BACK HOME. HIS CONDOMINIUM was packed with Reggie memorabilia: a wood clock with Reggie’s image carved into the face; a gilt baseball, a tribute to the home run that propelled Reggie past Mickey Mantle; two copies of his autobiography, Reggie; a videotape labeled REGGIE JACKSON, POSITIVE AT-BATS, 1985; a batch of Reggie clips stacked on a director’s chair emblazoned with its owner’s name.

The term “Reggie Reels” is not copyrighted in the United States. Yet.

You need to be logged in to comment. Login or Subscribe
Shaun P.
"Reggie Reels" is also not covered by a trademark application or registration.
Reply to Shaun