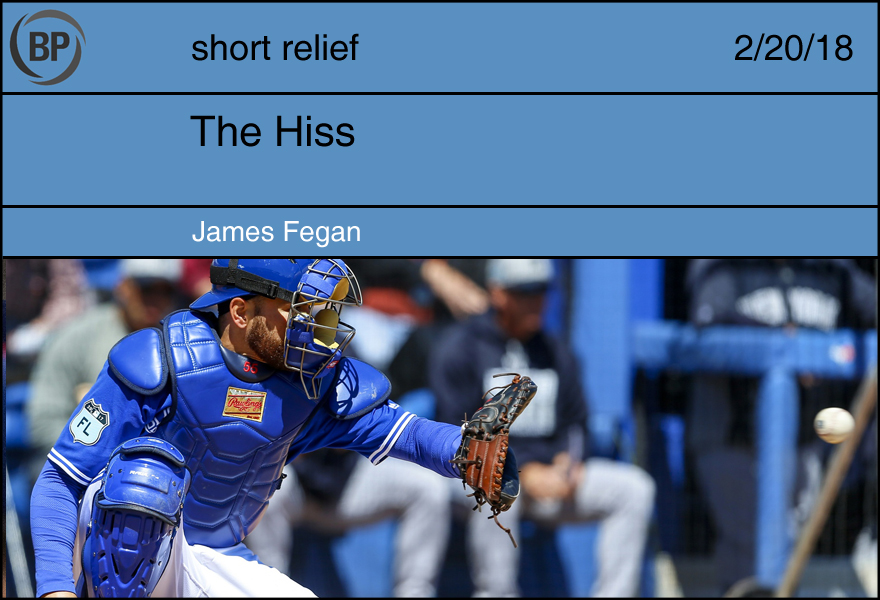 The smell of the grass, the crack of the bat, the snap of the glove. In the world of spring training sensations and signs of renewal, these are all trash leftovers for the losers in life. This entire country is obsessed with lawns. You can whack things with a bat with near impunity. The glove sound is admittedly pretty legit.

But there is one good spring training sound in the world, and it’s the menacing hiss of the laces of a baseball, both as it races out of a pitcher’s hand and as it flies through the air after a crisp, well-struck ball in batting practice on an otherwise empty and silent field.

The hiss, a disquieting deathly whistle at times seemingly hanging above the field itself, is quiet enough to beckon you forward, to draw you closer to hear a seemingly secret voice crying out the truth of every throw and bit of contact. And it’s terrifying enough to serve as a reminder that at the heart of this game are movements of deadly speed and power, to the point of making the air scream as the spinning laces rip through its fabric, just as it would tear through flesh.

A cathartic, stunning, last-second victory by the visiting team is one of the coolest sounds in sports. The sound of 90% of a roaring crowd is immediately sucked out of the building into dead silence, as if it were blasted into space, and against this eerie backdrop slowly creeps the sound of a team and their puny collection of fans hollering, which sounds as distant and removed as hearing your neighbors cheering from across the street. It’s just close enough to show that happiness is somewhere, but not here.

But it would be better, ever so slightly improved, is if a stadium ever got quiet enough at the sight of a backbreaking home run by the visiting team, that all that could be heard in that awful moment, was a chilling hiss of the ball sailing into the night.

That will never happen, which is why we need spring training. 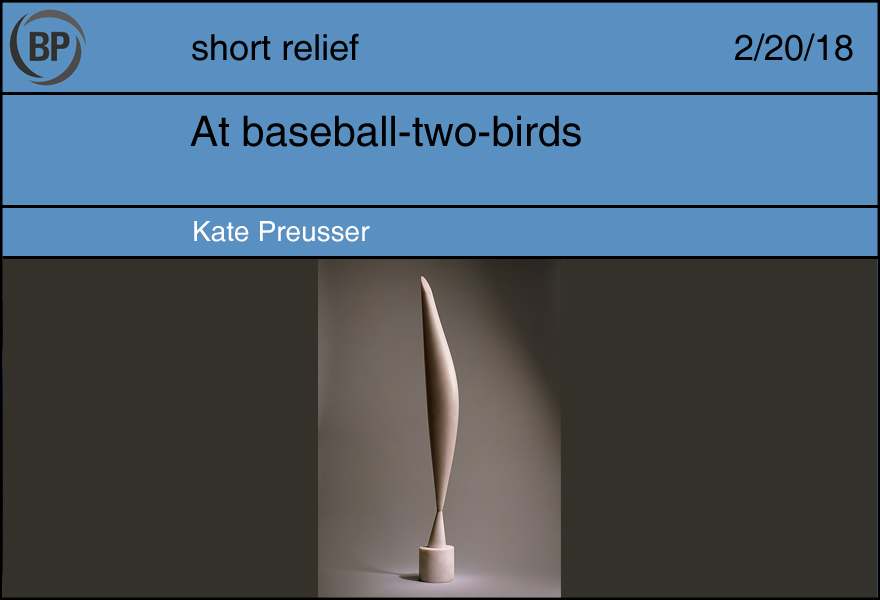 This last week, the Rays announced that the guiding inspiration for their new stadium will be Constantin Brancusi’s classic 1923 sculpture, Bird In Space.

Bird in Space is a touchstone of modern, minimalist art. Brancusi has eliminated the distraction of wings and feathers, planed the head and beak down to one slender elongation, and merely suggested the presence of tiny bird feet. Without the title, this form could represent any number of things: a wind-twisted tree, a ballerina mid-pirouette, the tender shiver of a new leaf. Despite the figure’s easy lyricism, a mechanical sensibility is present as well: a propellor, a lever, a ceiling fan’s blade. (In fact, when a version of this sculpture arrived to the US for the 1936 MOMA exhibition, customs wouldn’t let it through, refusing to believe it was a piece of art and instead insisting it had some taxable, industrial purpose.) Much of early 20th-century art struggles with the balance between the natural world and a swiftly shifting industrial landscape that saw cars replace carriages, telephones in every home, and eventually the poison gases of WWI.

There is a graceful, arching beauty here, but a tension, as well, the same tension that permeates all non-representational art: the acknowledged chasm between the idea of the thing and its representation in the three-dimensional world. It’s a beautiful, yet odd, choice to inspire a baseball stadium, a place that is often built to celebrate a game with a rich history, where the spectacle tends to be more maximalist than minimalist (I do wonder what Brancusi would say if offered a Krispy Kreme burger with nine patties and nacho cheese sauce).

In 1972, architects Robert Venturi, Denise Scott Brown, and Steven Izenou published Learning From Las Vegas, a study of the signs and symbols of the Las Vegas strip that’s often cited as a key text in the rise of postmodernist architecture. For all of human history, argued the authors, architecture had served a functional purpose which relied on decoration to express meaning (the “decorated shed”); it was the invention of Modernist architecture to have buildings shaped to reflect their purpose, such as Eero Saarinen’s bird-like TWA terminal at JFK, or the cascading tiers of Frank Lloyd Wright’s Fallingwater. Venturi and co. referred to this style of architecture as “the duck,” a reference to the Big Duck in Long Island, a literalist structure built by a local farmer hoping to boost his sales. To these artists, the decorated shed is a more authentic form of architecture than the duck, which corrupts Modernist principles for the sake of commerce.

For years, baseball stadiums have been some of the country’s finest decorated sheds, a collection of fences and bleachers and dirt, labeled for their purpose (and then re-labeled, as corporate sponsorships shift). Some have been left purposely blank, the easier for another team to use with a simple changing of the playing surface or re-hanging of some banners. The majority of communication is done by signage, not by the building itself, the baseball equivalent of hanging a shingle out: 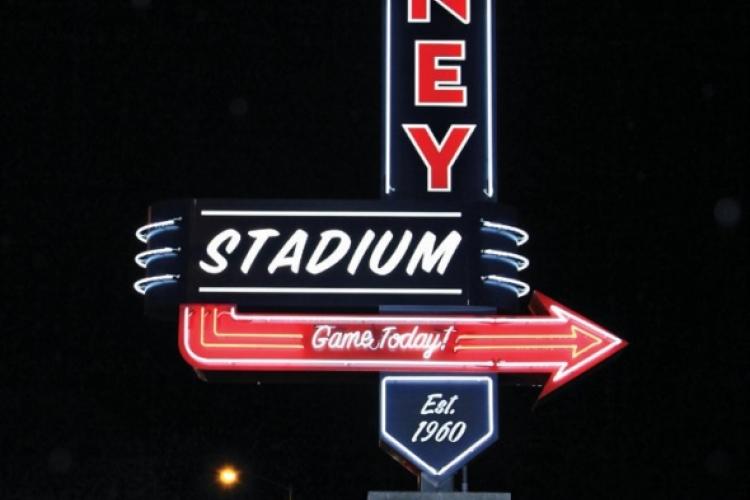 If the new Rays stadium gets built, and if it does with a strong sense of Brancusi’s sculpture, it will mark a departure from the prevailing trends in building ballparks, not only as decorated sheds but also as a further step away from the retro-chic model ushered in by Oriole Park, which newer ballparks–like Miami’s–have veered away from. Hopefully, the Rays won’t venture too far into Modernism and come out more duck than bird. It is awfully sad, after all, to eliminate the distraction of wings. 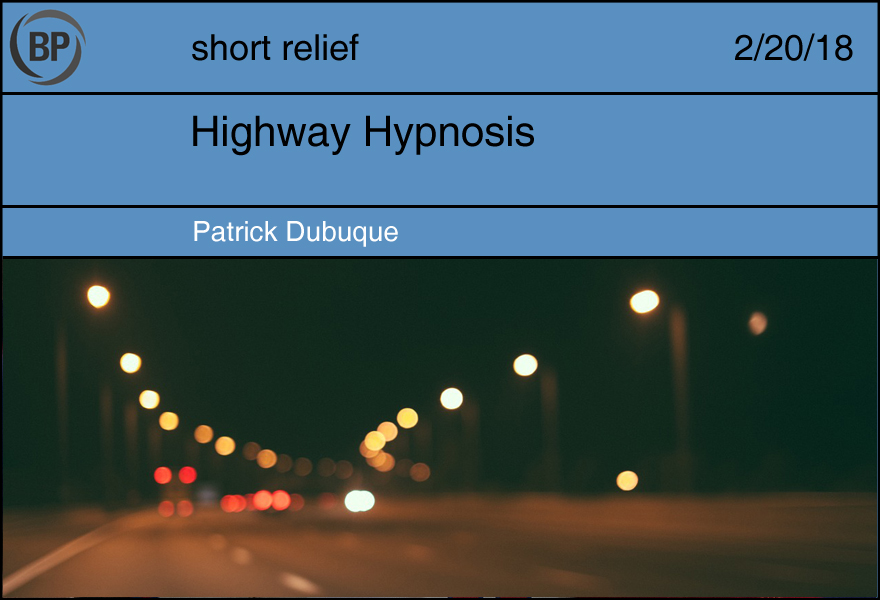 For being in the middle of a metropolitan area, the Federal Way corridor of I-5 managed to feel like nowhere. Out of the corner of his eye, Christian Bergman watched the foliage roll by in the dark as he drove the empty freeway, street lights sucking out all the color from the trees, so nondescript and formless that they seemed scribbled by some inattentive preschooler. They lined the road like an honor guard, saluting him.

Bergman held the wheel lazily with his left hand, while his right hung lifeless. He’d thrown four innings of one-run ball tonight, scattered his hits, kept the game from getting out of hand. Four innings of one-run ball was a good game. Too good: now he was heading back to Tacoma, while some kid with a fresh arm and a spare option was driving the other way, probably passing him across the median now. That was where he was.

He sighed and rubbed his eyes again, letting go of the wheel for a moment. He didn’t need to see; he had all this memorized. The lanes rolled past him in the black of the pavement like ellipses. The green of the exit signs floated above, each with their inviting arrows. I could take any of these, he thought to himself, drive until I’m out of gas. I could stop here in the freeway. But even that wasn’t original; that was a Michael Douglas movie. Christ, the kids in Tacoma weren’t old enough to know Michael Douglas movies.

Forty minutes from Safeco Field to Cheney Stadium, a drive he’d already made a half dozen times this year. He squinted at the few tail lights ahead of him, blinked a few times, tried pinching an earlobe to keep him awake. Some of the guys tracked their statistics religiously; Bergman had never found much comfort in it. But he did wonder other things, like how many miles, how many lane changes, how many times he’d veered into a rumble strip. How many times he’d thought about quitting around Des Moines, only to forget by the time he’d reached his apartment.

When they told me about life, they made it sound like a path, like I was going forward. It made sense. They never told me it’d be the same path, back and forth, over and over.

“You are on the fastest route,” the voice in his phone said.

You don’t need to tell me, he thought.