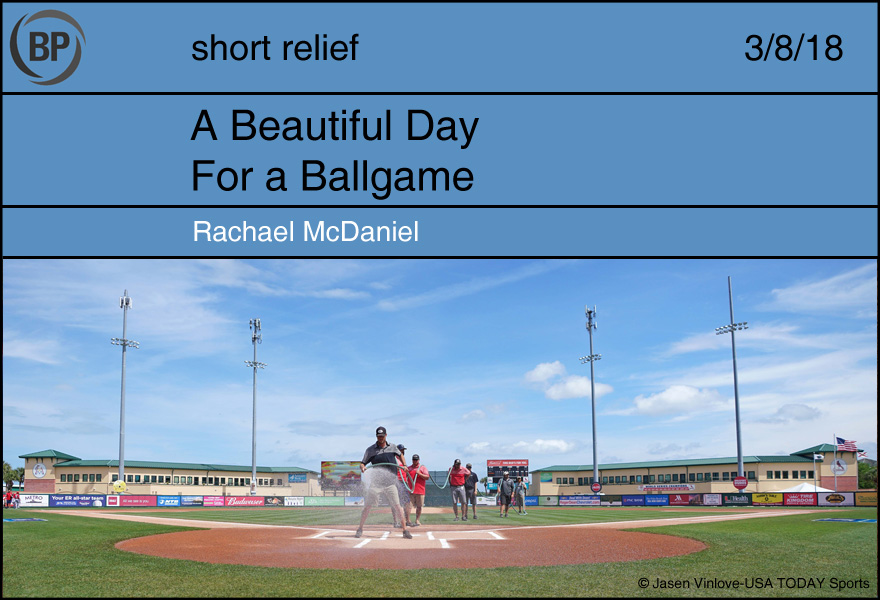 You wake up one morning and everything is fine. Your room looks the same as it did when you went to sleep. Nothing has been disturbed or altered. You didn’t have the nightmares last night. There are no demons in this room. You feel okay. You get out of bed and open the curtain. It is sunny outside.

It is the weekend, as far as you can remember. You don’t have to worry about working today. You can relax. You keep your pajamas on, make some coffee, sit down on the couch. You turn on the TV. There’s baseball on. Spring training. It’s sunny, too, wherever they are playing. The sky is very blue, and the grass is very green, and outside your own window the sky is that same blue and the grass is that same green. For some reason this makes you uneasy.

You watch the game for a while. It’s a normal spring training game. Runs are scored, nameless jerseys are replaced with other nameless jerseys. The commentators sound kind of bored. You decide to check your email. Your laptop won’t connect to the internet. It says there’s no signal.

That’s strange. You check your modem. No lights. Must be some fuckup on your ISP’s end—you definitely paid your bill on time. You pick up your phone to call them. No bars. When you dial the number and press the call button there isn’t even a ring on the other end.

On your TV, it’s the bottom of the third, blue and green and sunlight. Outside your window, the same. The bright green leaves on the trees rustle, a light breeze running through them, a perfect vision of spring. There is no signal. How is there baseball on the TV? Fear rises into your throat. You try to change the channel. There’s just the same game. What a beautiful day for a ball game, the commentators say, their voices distant and apathetic. You change the channel. They are still saying it. It’s all the same game.

You try to your mind slow down, try to breathe. This is all very weird, yes, but there must be an explanation for it. You are better than this now. You know what is and isn’t real. You aren’t ruled by fear anymore. You don’t need to feel this way.

So you breathe, and you try to stop your hands from shaking, and you get dressed. You are going to open a window. You are going to step out onto your balcony, feel the sunshine and the breeze and smell the grass. You are going to reassure yourself that the world has not changed while you slept. That it’s still there and still safe, or at least as safe as it ever was. Still real. That the version of the world that lives inside your brain, the one that has made you so afraid, has not leaked out somehow.

You walk to the glass door that is the barrier between you and whatever is out there, the brilliant light shining hot on your skin. You grab the door handle. You notice that there are no crows on your lawn, nobody walking their dog, no cars driving down the street. You are overwhelmed by a feeling that you are looking at an image projected onto your window. A moving image, constructed to imitate reality, all the more sinister for its attention to detail. What might be behind it? What might it be concealing from you? What has happened here?

You are too afraid. You can’t risk it. You pull your hand away from the door and collapse back onto the couch, your whole body trembling, choking on the knowledge that you can never leave again, never again breathe fresh air. The knowledge that you have always been afraid and always will be. It’s the top of the fourth now. From behind the glass, the voices sigh: What a beautiful day for a ballgame. 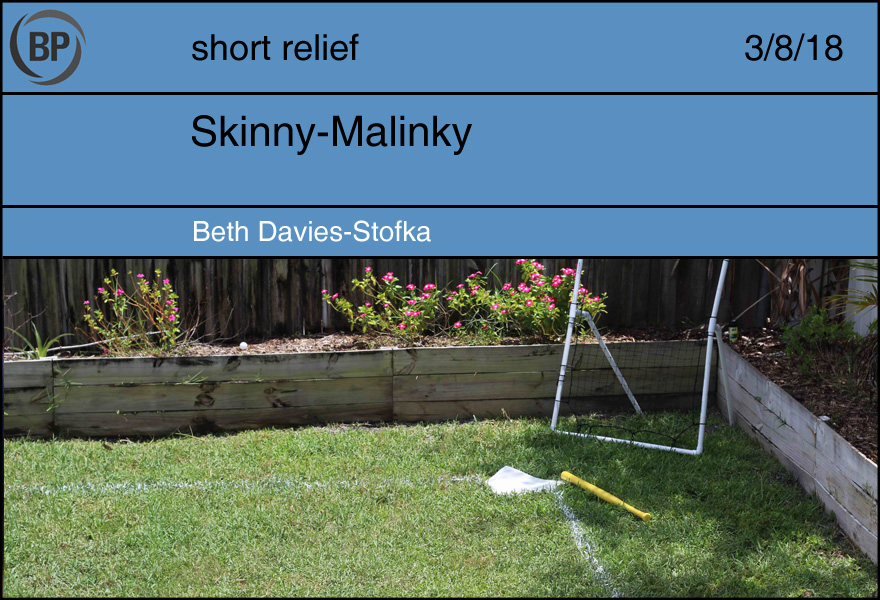 Grandma waits all morning to play with her. When they are finally in the back yard with a big bag of wiffle balls, Alice wears Grandma’s Cardinals cap, her long blonde ponytail pulled through the strap. She stands ready in her imaginary box, bat on her shoulder.

The first pitch, a fastball, flies just below the knees of Alice’s long skinny legs; she wears huge pink high tops on her long skinny feet. She casually explains that she is “Skinny-malinky long legs big banana feet. It’s an old Scottish thing my dad taught me.”

Skinny-malinky long legs
Big banana feet,
Went to the pictures
And fell through the seat.

Alice hits a curveball clear over the house. After standing and admiring it for a few modest seconds, Alice says, “C’mon, Grandma! Let’s go!”

Pitches fly. Grandma throws drop balls and rise balls and Alice peppers the house with them. Grandma throws harder, challenging Alice with fastballs. When she pops up Grandma drops them as often as not. “Keep your knees soft, Grandma! Bounce on your toes. No, just a little.” Alice demonstrates. “That way you can move with the ball, you know, just be where it is when it gets there.”

When they empty the bag they race to collect the balls, reliving the more memorable hits, especially the ones that are lying in the front yard.

When the bag is full they begin again. “You should bat, Grandma!” She is being generous but Grandma says no. It’s too much fun to watch Alice bat. She swings so hard that she corkscrews when she misses. The next pitch soars over her head.

“What was that, Grandma?”

“I’m sorry Alice! I can’t control my arms when I’m laughing this hard!”

A few too many wiffle balls have hit Mum’s window and she politely asks them to keep it down. Giggling, Alice and Grandma conspire while they put their toys away. Give Mum an hour to take a nap. Then they’ll be back. 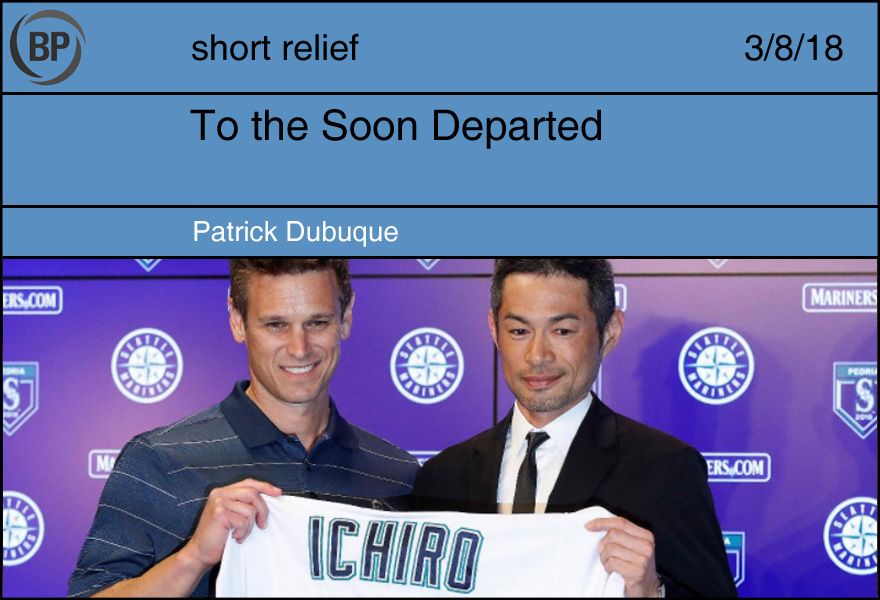 Sometimes I wonder what it will be like to grow old. You’d think we, as a species, would have figured it out by now, that those who age before us could give us a preview, but either they’re too absorbed to hand back the knowledge or, more likely, we’re too consumed to listen. I’ve never known many old people myself, at least none I’d consider archetypal. My family is small. I’ve read that retirees become fascinated with the departed around them, not out of a sense of morbidity but the opposite; it becomes their role to carry on the stories of those who depart.

Roger Angell, in his essay This Old Man, remarks on the invisibility of the old, the transition as they fade to the background of conversations, organizations. The baton is passed, or it is wrenched from them. But no matter how great the person, the disappearance is so gradual as to be impossible to see, no matter how one squints.

Baseball provides a strange little preview of our own mortality, a world in which 40 is 80, where the same phenomena occur: counting down the number of players older than ourselves, sifting through the obituaries of the careers of others. One day they’re great; the next, they’re good, or hurt, and waiting to be great again. Then they’re role players, then one day they don’t get a contract, then the next day, and then.

This was supposed to happen to Ichiro. His hair gray, his wiry frame almost frail, this was the season where he was supposed to disappear, lost in the glut of the free agent market. Yet here he is, back in my hometown, a symbol of his team’s modest ambitions and love of nostalgia. So instead it’ll be next year, or perhaps April. It will happen.

There are many concerns about Ichiro and about winning, and what he means for winning; I do not care about them. One I don’t understand is the one that he might be bad before the end. It’s very likely he’ll be bad. Ichiro Suzuki is 44 years old, or 88 in baseball years. The idea that baseball players are supposed to retire the exact moment before they’re no longer of use, that the degradation of their skills is somehow shameful or a tarnishing of his reputation is as coldly calculating as criticism based on dollars-per-WAR, the corrupted utilitarian philosophy that people are only what they are worth.

When Ichiro left Seattle, he was invigorated by the new challenges set before him, joining a Yankees team with championship ambitions after half a decade of lonely excellence. The Ichiro that returns is one who has outgrown his own legacy, outgrown ambition; he has nothing left to prove except that he is alive, that tomorrow he will be alive. 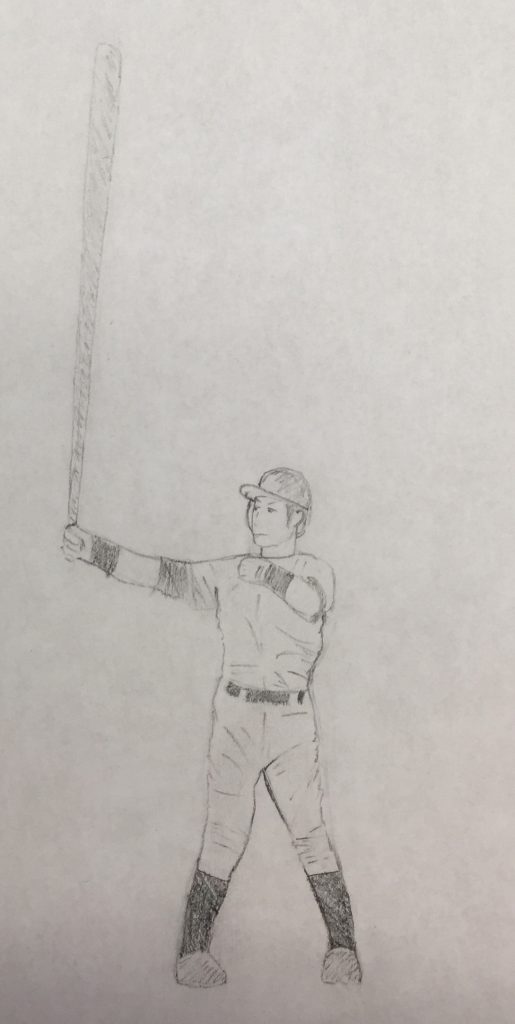