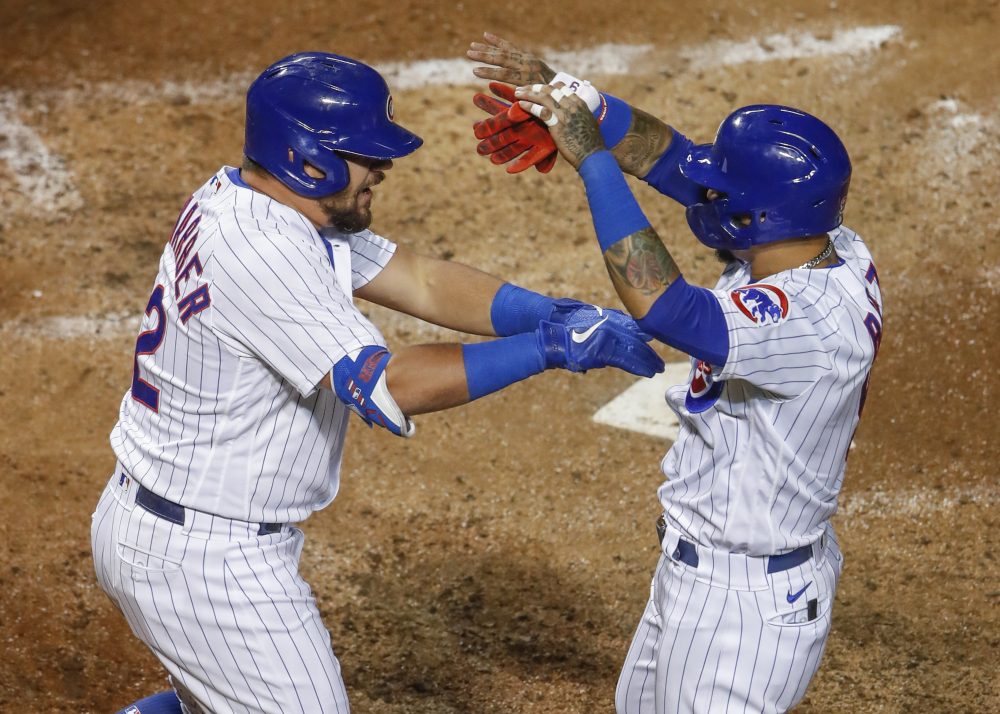 Welcome back to The FAAB Review, the series that looks at FAAB bidding in expert leagues to help you, the Baseball Prospectus reader, with your fantasy baseball bidding needs. Tim McCullough covers the FAAB bidding in the Tout Wars Mixed Draft League, while I cover LABR Mixed and both NL-only and AL-only leagues. LABR uses a $100 FAAB budget with one-dollar minimum bids, while Tout Wars uses a $1,000 minimum budget with zero-dollar minimum bids.

Tout Wars’ free agent deadline is 8 p.m. ET on Sunday, while LABR’s deadline is Sunday at midnight ET. (Based on the timing of this week’s article, any statistics in this article are through Sunday night’s games.)

It was a quiet final week for free-agent bidding in the Tout Wars Mixed League, as only 12 players were awarded. Two-start pitchers, two closers, and a couple of batters returning from the IL made up the bulk of the players getting bids. There’s not a lot of help for the sprint to the finish available on waivers in this league, so many of these players will only help in deeper mixed and mono-league formats.

Yoshihisa Hirano $178
Over the past week, Hirano has notched a pair of saves for the Mariners and solidified his position as the top choice in what has been a closer committee all season. Hirano appears to be in a groove. He has scattered four hits over his last four innings, and his season ERA stands at 2.70. Seattle has seven games this week, but they dropped five-of-seven last week and face a tough schedule with the Astros and A’s coming to town. Good luck getting saves there.

Austin Voth $82 (PHI, NYM)
Voth is among the few starters left on the waiver wire with two starts this week in the Tout Wars Mixed League, which is about the nicest thing you can say about him. After a pair of strong starts at the beginning of the season, he has since been a dumpster fire with a 7.17 ERA and a 1.65 WHIP. Voth did pitch well in his last start, though, so maybe he can carry that into the final week. However, both the Phillies and Mets are among the top-10 teams against right-handed pitching. So maybe not.

Keegan Akin $82 (Other Bids: $64) (@BOS, @TOR)
Akin has pitched well as a starter over his four starts with a 2.35 ERA and 24 strikeouts over 15 1/3 innings. However, he also allowed 20 hits and eight walks and was pulled after just two-thirds of an inning against the Yankees two starts ago. The Red Sox and Blue Jays are among the top-12 teams against left-handed pitchers, so the rookie will have his work cut out for him.

Reynaldo López $64 (@CLE, CHC)
López has made six starts, but a total of 10 1/3 of his 20 innings have come over his last two outings. In those two games he shut out the Tigers over five innings and allowed three solo homers to the Twins in 5 1/3. Both Cleveland and the Cubs are in the bottom half of the league against right-handed pitching, so López might be a sneaky-good two-start pitcher this week.

Tommy Pham $36 (Other Bids: $26)
Pham was tossed back into the player pool after the Padres put him on the IL in mid-August. At that point, he was batting just .207/.316/.293 with two homers but had boosted his fantasy value with six steals in just 23 games. Pham rejoined the Padres over the weekend and will likely get plenty of at-bats over the final week to help him tune up for the playoffs. The Padres only play five games this week, so keep that in mind if you decide to pick him up.

Harold Castro $25
Castro returned from a hamstring injury last week and will resume his super-utility role for the Tigers. Although he is batting .314, he doesn’t hit for power and has just two RBI and four runs scored in 40 plate appearances. Don’t expect much help from Castro if you’re looking for help in counting stats.

Jake Lamb $135 (Other Bids: $25, $24, $9, $0, $0)
Buried on the bench and then released by the Diamondbacks earlier this month, Lamb has found new life with the Oakland A’s, starting at third base in place of the injured Matt Chapman. This could be more of a dead-cat bounce than anything else. However, it is worth riding the hot hand and seeing whether Lamb can keep up this pace for the final week of the regular season if you have a hole at corner infield.

Nomar Mazara $25 (Other Bids: $16, $2)
I was patient with Mazara almost all year but finally couldn’t stomach his ghastly .223/.298/.295 line. I cut him earlier in the week. I figured that there would be a few bidders, but I had a roster crunch and the trade deadline in Tout had passed. Although Mazara is still young and the 2020 season should be graded on a giant curve, Mazara now has an underwhelming .259/.319/.447 career line in 2,313 plate appearances. This is probably what he is.

Dylan Carlson $83 (Other Bids: $1)
It has been a lost year for Carlson. He arrived late due to service time shenanigans and left early due to poor performance. Whether he would have performed better had he been given an honest shot at a job on Opening Day is an exercise in speculation, but the bottom line for our fantasy squads is he didn’t work out. Carlson is back on the Cardinals roster and has started their last three games. Scoop him up in NL-only if he was dropped in your league.

Kyle Wright $45 (Other Bids: $0) (BOS)
Wright has been awful this season and is sporting an ugly 6.63 career ERA in 57 innings, but of course he was brilliant against the Mets yesterday. He tossed 6 1/3 shutout innings and allowed only one hit. I’m wary of using him despite the one good outing, but everything this coming week is circumstantial. If you need to push for wins, Boston is a weak matchup.

Tucker Barnhart $32 (Other Bids: $15)
Barnhart and Curt Casali are splitting time 50/50 behind the plate for the Reds, so this doesn’t look like a good pickup. But Barnhart is the hotter hitter. With the Reds fighting for a playoff spot, it is possible that manager David Bell goes with the hotter hand the rest of the way. Even if he doesn’t, Barnhart’s playing time is safer than it would be for a player on a team that has already clinched a playoff berth.

Genesis Cabrera $20 (Other Bids: $7, $0)
St. Louis’ bullpen is a mess. In the last three days, Cabrera, Andrew Miller, and Ryan Helsley all have saves for the Redbirds. The benefit to picking up any Cardinals reliever is that St. Louis has eight games remaining in seven days. The team might continue to split the save opportunities due to sheer volume. If you need to roll the dice on a save or two in the last week, there are worse plays than Cabrera.

Lewis Brinson $14 (Other Bids: $2)
Brinson was supposed to be on the weak side of a Marlins outfield platoon, but he has started their last four games and looks like their everyday right fielder. His stat line is much better than it was in his previous major-league stints, although it still isn’t anything close to the upside for which the fantasy community was hoping when Brinson was a prospect. However, even if this is all Brinson is, a 10/15 outfielder can play in deeper mixed formats if the batting average doesn’t crater.

Brady Singer $9 (Other Bids: $4, $3, $1) (STL, DET)
For a pitcher who only had one professional season under his belt entering 2020, Singer has performed capably. He is also riding a mini-hot streak, with two back-to-back outings in which he has allowed no runs, three hits, and three walks in 14 innings with 16 strikeouts. Detroit makes this an extremely favorable two-start slate to finish the year for Singer.

Nate Lowe $3 (Other Bids: $2)
I was worried that Lowe would be relegated to a platoon, but the Rays are using him full-time at first. He also is batting anywhere between fourth and sixth in the lineup. The strikeout spike in the majors is somewhat concerning, especially since I don’t believe that Lowe can maintain a .375 BABIP. As such, if Lowe is a .230-.240 hitter, he will need to generate more power to be usable in all formats. Lowe has been much more effective against righties this year (small-sample caveat applies), and the Rays are scheduled to face five right-handers in their six games this week.

Kyle Schwarber $10 (Other Bids: $5)
I was the losing bidder on Schwarber. Part of the reason the bidding was so light on Schwarber is that most teams were low on funds or completely tapped out. However, another reason is that sometimes a player is released in the middle of a transaction cycle and is not available as a free agent until close to the FAAB deadline. Schwarber keeps mashing home runs, but the rest of his numbers are off. His batting average has been fantasy kryptonite. He has also disappeared in September, posting a .111/.250/.167 slash line. Maybe I’m lucky that I didn’t get him.

JT Brubaker $9 (Other Bids: $1) (CHC, @CLE)
The two-start slate helps Brubaker and makes him playable anywhere except shallow mixed. However, he hasn’t tossed more than 5 1/3 innings in a start this season, and it is possible that the Pirates shut him down or pull him early in his final start against Cleveland. The hope with this buy: 10 strikeouts across two starts and avoiding the dreaded outing that kills your ERA/WHIP in the final week.

Kyle Gibson $2 (Other Bids: $1) (@LAA, HOU)
My podcast partner and colleague Jon Hegglund falls where I do on Gibson: He is OK for 15-team mixed and AL-only in his final two scheduled starts at the Angels and against the Astros. Gibson has scuffled this season but was amazing in a shutout against the Astros last week, striking out nine and allowing seven baserunners. If the Astros clinch a playoff spot before Saturday (they’re essentially five up on the Mariners with seven games left to play because they hold the tiebreaker), Gibson could have the added benefit of facing a “B” lineup to close out his 2020.

I’d like to thank everyone for taking the abbreviated ride with me and Tim on the FAAB Review. Good luck in all your leagues down the stretch!