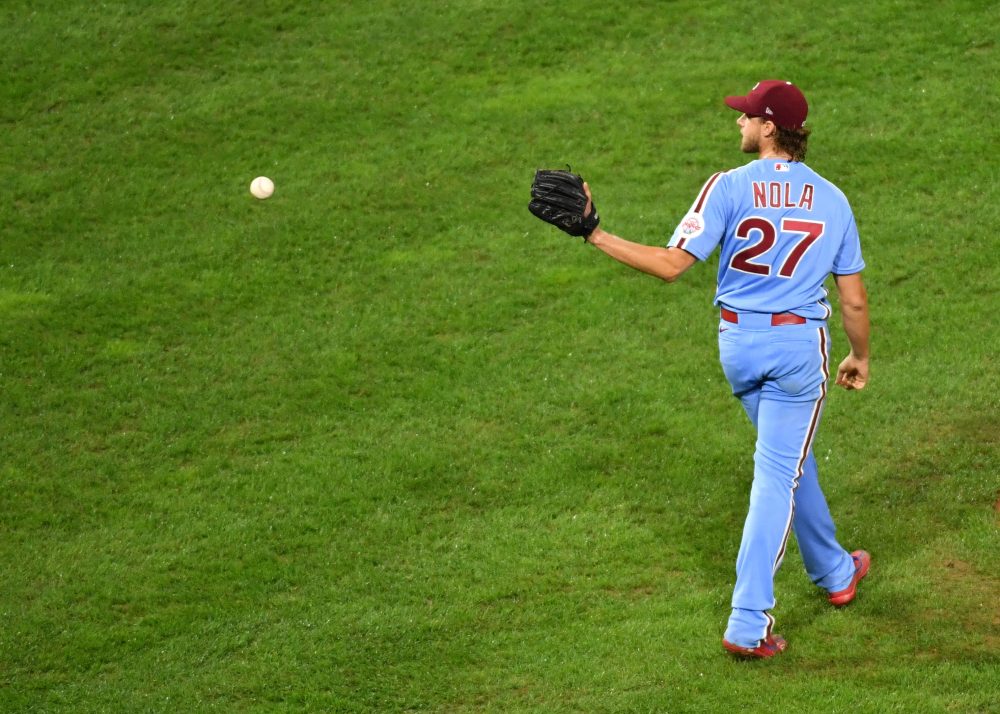 With the conclusion of the regular season, it is time for baseball writers to cast their votes for the best pitcher in each major league through the Cy Young award. Traditionally this has gone to a starting pitcher who has pitched a “qualifying” number of innings (this year: 60). Tradition also has encouraged consultation of pitcher wins and Earned Run Average (ERA) to guide this decision. Although pitcher wins no longer hold the influence they once did, the starter in each league with the ERA “title” still tends to be the favorite for a Cy Young.  Increasingly, writers also look to Fielding Independent Pitching (FIP), which evaluates pitcher performance more consistently than ERA.

This year in the National League, relying upon ERA alone would be unwise. Although the NL ERA leader, Trevor Bauer, has certainly pitched well, he has faced the weakest opposition of any qualified pitcher in baseball, thanks to the geographic limitation of facing only Central divisions. Aaron Nola, on the other hand, has faced much tougher competition pitching against the AL East and NL East, and has the higher ERA to prove it. Adjusting for this massive disparity in opponent quality, Nola may be equally, if not more deserving of the award.

Deserved Run Average (DRA), Baseball Prospectus’ pitcher run prevention statistic, accounts for these disparities.  ERA and FIP do not. Although it is no surprise that we like our own statistic, problems like this are why DRA exists: to account for context that can make a low (or high) ERA or even FIP quite misleading.

The Importance of Competition

Some hitters are much more challenging for pitchers to face than others. The American League (AL) is traditionally harder to pitch in than the National League (NL) thanks to the designated hitter. In turn, the AL East is often seen as particularly challenging as compared to the AL Central or AL West because of the Yankees and Red Sox, among others.

In the AL, fortunately, as of yesterday morning ERA and DRA agree: Among qualified starters, Shane Bieber had the lowest ERA at 1.63 and the lowest DRA at 2.58 (+/- .17). Although there is some room to discuss Kenta Maeda at a DRA of 3.10 (+/- .28), by the metric the probability of Maeda having pitched better than Bieber is somewhat remote, and Bieber has also thrown more innings. So with luck, the AL Cy Young award should be fairly drama-free.

In the National League, however, we have a much different situation.  Consider some of the top qualified pitchers by ERA, FIP, and DRA:

The challenge is to quantify this effect in a way that is helpful. The good news is that we can help. DRA uniquely seems to think that Nola is much better than his ERA and FIP indicate. What is DRA seeing that these other statistics are not? In this case, it includes the quality of the pitcher’s opposition.

One way to evaluate the quality of a pitcher’s opponents is to look at how DRC+ rated those same batters. DRC+ is Baseball Prospectus’ all-encompassing statistic to value opposing batters. Like DRA, DRC+ is opponent-adjusted, park-adjusted, and sample-size adjusted. What happens when we look at the DRC+ of opposing batters faced by qualified pitchers in 2020?

This table shows the lowest opponent DRC+ values this season. With DRC+, higher is better, which means that no qualifying pitcher faced a weaker collection of opposing hitters than Trevor Bauer. Of course, it is not just Bauer: This list of weakest opposition faced is dominated by pitchers from the AL or NL Central, all of whom had the privilege of facing hitters from those same divisions every day. Although there admittedly is some chicken-or-the-egg going on here, the sheer persistence of the effect, the fact it remains visible after 60 games, and the reality that DRA and DRC are specifically designed to capture this effect, all lend credibility to the idea that we are looking at something that is not only real but critically important to understanding pitcher success during the 2020 season.

Naturally, if pitchers in one area of the country benefited from weak opponents, it stands to reason that other pitchers paid the price. Here are the pitchers who faced the most grueling opposing schedules:

This list, in turn, is a “who’s who” of qualified pitchers from non-Central divisions.  Antonio Senzatela faced the most brutal schedule of all; at a close second, we have Aaron Nola. Nola faced the Mets twice, the Braves twice, and the Yankees once. Most of his starts were against decent-to-good offensive baseball teams.

It is becoming clear why DRA is more impressed with Aaron Nola’s 2020 season than Bauer’s. The slates of opposing batters are completely different. To rely upon Bauer’s ERA or his FIP is to assume Nola faced the same lineups that Bauer did, or to effectively punish Nola for facing tougher competition. Thus, using a run prevention statistic that fails to account for strength of competition will provide a misleading and probably unjust result.

How did the various NL Cy Young contenders match up as compared to each other in quality of opponent? Here are the ratings for the names you might hear the most:

Lamet and deGrom faced essentially average opponents. Darvish’s opponents were easier than most, but still within spitting distance of average. Nola and Bauer, on the other hand, are in a different universe. For those worried about Shane Bieber, his opponent average DRC+ was 97, which is the same as Darvish.

Opponent DRC+/DRA is not currently an updated feature of our Leaderboards, but if readers find it useful, we may add it this coming offseason.

Trevor Bauer is an extremely good baseball pitcher who will receive Cy Young votes, and deservedly so. However, his sparkling 1.73 ERA cannot be taken at face value. Conscientious writers never consider just one statistic in filling out their Cy Young ballots, and many strive to adjust for context like this. DRA (or opponent DRC+, if you prefer), should therefore be an important consideration in these balloting decisions.

You need to be logged in to comment. Login or Subscribe
Rosevear House
Well observed. Although I don't believe any argument that the central teams aren't relatively weak will hold up - isn't the opposite also true, that hitters in the central leagues are having to face the best pitchers more often, messrs Bieber, Darvish, Bauer, Maeda and so on, hence depressing their hitting stats. Couldn't you have just written this article with a different slant, promoting the cause of Tim Anderson, Jose Abreu, Jose Ramirez or ... wow, the NL central was REALLY bad... Ian Happ?? as the best hitter in baseball 2020?
I guess that's what you were referring to with your chicken-and-egg comment, can these things be separated out?
Reply to Rosevear
Tieran
It's pretty obviously that the hitting is weak rather than just the pitching strong when half the pitchers in the central are having career years and the already good hitters for the most part are sustaining their previous production or even improving on it. We can also just look at stats from last year when they played non intradivisional opponents and see that the offense sucked in the central previously and it's unlikely to see such a huge shift in one year.
Reply to Tieran
schlicht
AL central was surely offensively weakest AL division last year, but NL central was about the same as the NL east
Reply to schlicht
Jonathan Judge
Yeah I think you have talked the problem through, essentially. Unless virtually every pitcher in the NLC and ALC is above-average it becomes tough to see it as about pitching. I think Tieran is right that it is sensible to see it as part of a larger trend and the reality that since it is all MLB comparisons can still fairly be made.
Reply to Jonathan
schlicht
Because all comparisons are made within geographic divisions, comparisons among them are extremely fraught, given Rosevear's point of the interaction of pitching and hitting performances.
There will be exactly 1/2 of Central pitchers above average (since the average is only for the central.
Not even DRC can get away from the fact that the lack of any cross-division results leaves us without any 'controls'.
Reply to schlicht
Rand Simon
The awards this year should have been given out along divisional lines, not based on league. There was no American or National League this year. Anyway, where can we see the full list of pitchers' DRAs?
Reply to Rand
Craig Goldstein
DRA is on our leaderboard here: https://www.baseballprospectus.com/leaders/pitching/pitching-by-season?year=2020≶=all&team=all&lvl=mlb&min=30
Reply to Craig
StarkFist
Point well taken, and I'm a Mets fan, so naturally, I'd be pleased to see de Grom win the NL Cy Young. But for all that, I won't be too upset if Bauer wins it.
Reply to StarkFist