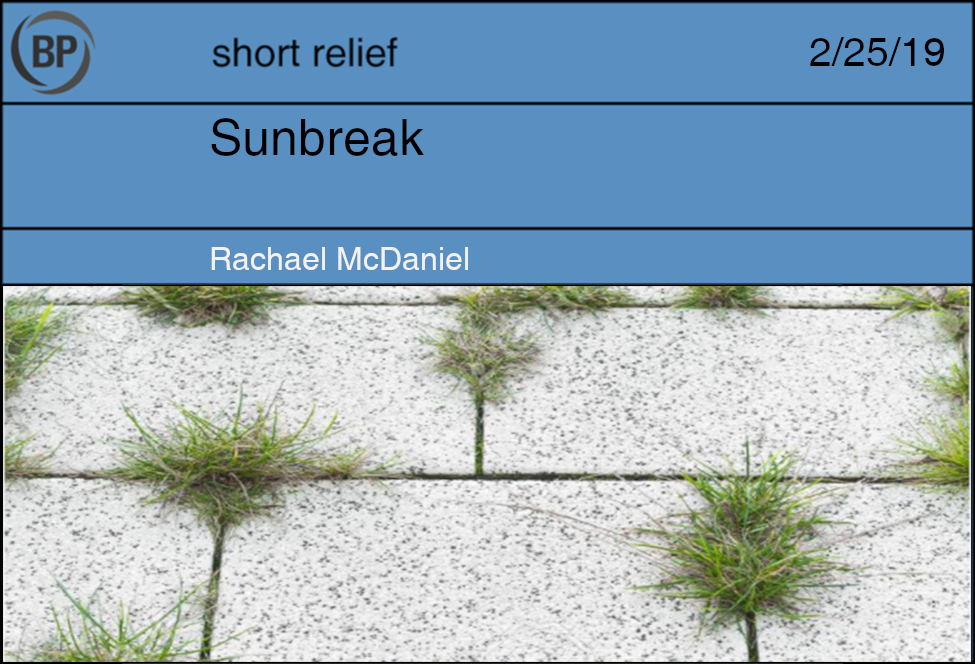 You can choose the family you spend your life with, but you can’t choose the family you’re born with, even if you know that some of them, given the opportunity, would certainly switch you out for someone else. As a child, you always say that you’re going to run away, that you’re going to the next town over, where your nicer family is. Even as you say that, though, you know there is no nicer family. You never go anywhere. When you open the door to leave, you turn back, hide in the closet, wait until it’s safe to come out. It’s been a long time since you stopped pretending that you’re going to leave, but you are still waiting in the dark.

When someone is dying, especially someone in your family, you’re supposed to take that chance to get everything out in the open, to forgive them. Otherwise you’ll be waiting forever. They don’t explain how you forgive someone for a harm that they won’t acknowledge, or a harm whose infliction they believe is the good and right thing to do. What is there to bring out into the open? How do you forgive someone who doesn’t want anything you could offer them? There is only a suffocating silence, growing thicker by the day. You grasp through the polluted air at nothing. There is nothing to talk about, nothing for you to do but wait through the long winter.

There is one thing, though. There is baseball. That’s something to talk about. That’s something you can grab hold of, a line you can extend. When you ask a question, you will get a response, and maybe a question in return — a question that you will know how to respond to. There’s been a cold snap recently, some rare Vancouver snow, but the winter is still ending, and there is baseball somewhere — somewhere bright, out in the open.

You might never stop waiting, and the silence may never stop surrounding you. All you can hope to do is break through a little bit, be able to feel the sunlight, stick around for as long as you can before you get pulled out by the roots — a weed pushing through cracks in the pavement. A little bit of green in the shadows. “Do you want to watch the game?” you say, and for a moment, you can breathe. 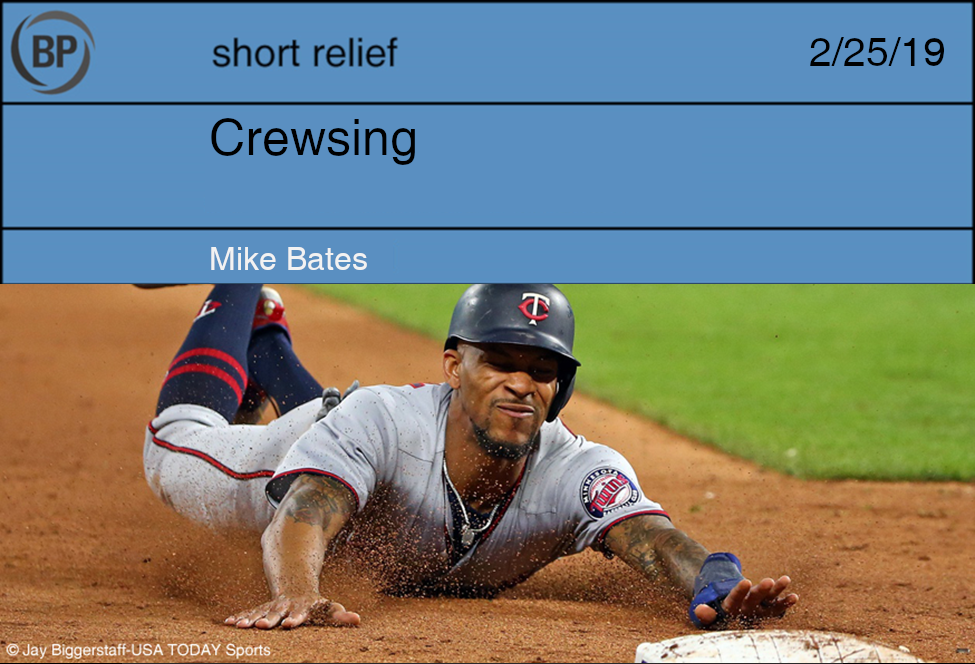 My fiancée and I are trying to plow through Brooklyn Nine-Nine before the regular season gets started, since I’ll have less free time once that begins. She loves Captain Holt, played by Andre Braugher, and his deadpan delivery. My favorite, however, is Terry Crews, who has shot to the top of the list of my favorite actors and comedic performers in general.

Terry Crews, for those of you who are dumb, is an exquisitely chiseled sculpture of a man who played in the NFL before turning to Hollywood and remaking himself as one of the most gifted physical performers working today. He wasn’t that great on the football field. A look at Football Reference indicates he had just three tackles in three seasons. His two football highlights on YouTube both involve penalties. He washed out after 1996.

But, of course, you can’t judge Terry Crews by what he couldn’t do. You have to look at what he can do. He can carry full grown men across the threshold with ease. He can convincingly smash chairs with his bare hands. And he towers over everyone and everything in every show or movie he works on. Don’t get me wrong: He has great comedy chops as well but, because of his amazing strength and athleticism, Crews is simply able to execute jokes that no other performer convincingly can.

That’s also why, even after his disastrous 2018, I continue to have faith in Byron Buxton. As a 24 year old, Buxton hit .156 in 28 games last year. His OPS+ was 4. He was hurt most of the year and he was not called up in September when rosters expanded (in an effort to limit his service time). All of that has understandably tarnished the shine he once had as the number 2 overall pick and best prospect in baseball.

But, when healthy, Buxton still combines the best speed in baseball with exceptional defensive instincts and power. He’s so physically gifted that, even when he broke his toe last year, the Twins asked him to play through it. And while the injury destroyed him at the plate, Buxton continued to be productive in the field and on the bases. It just hurt to watch him as he grimaced through.

We know that, barring injury, Buxton will be an elite defender in 2019. We know he will be one of the most dynamic, and efficient, baserunners in the game. He doesn’t have to hit much to be a marvel. Ultimately, that may be disappointing to those of us who want a 6 win dynamo. But if we focus too much on any potential offensive struggles, we’re going to deny ourselves the joy and wonder we should feel from what he does bring to the field. The same delight I feel when Sergeant Jeffords lifts Jake Peralta up by his skinny arms and dangle him above the ground. 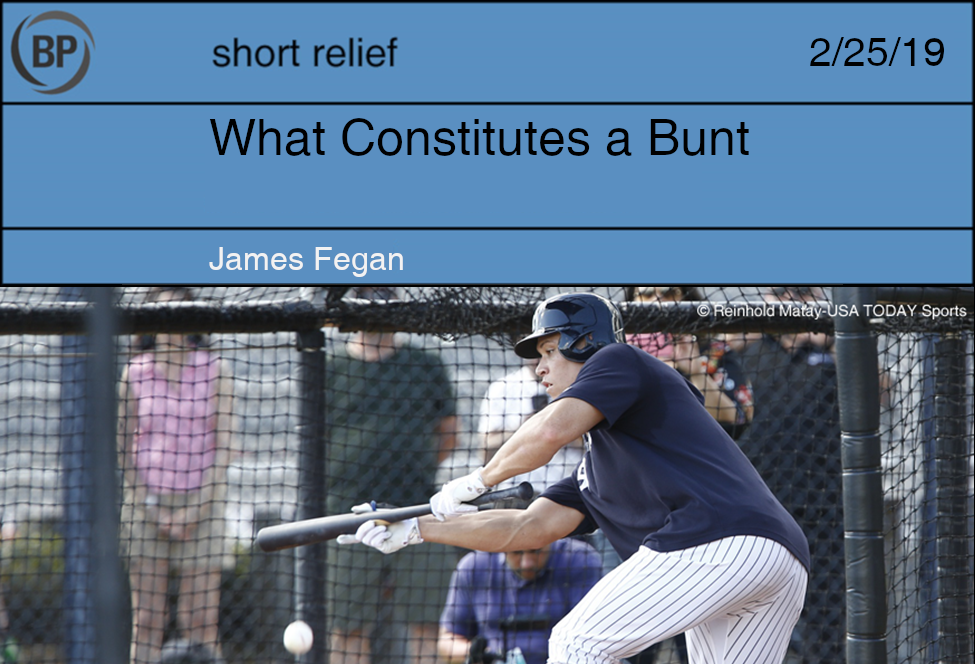 What constitutes a bunt?

It seems like a pretty clear thing that all of us would be able to determine on sight, but encountering a sizable disparity between the total league counts in bunt hits between Baseball Reference and FanGraphs archives reveals at some point in the margins, someone has to make the distinction between bunt hit and lucky shank, or between bunt hit and sacrifice bunt attempt met with truly stunning defensive incompetence.

It should be getting easier to make the distinction, since the latter simply isn’t happening anymore. A certain generation of fans always love to accuse the professional baseball world of a complete abandonment of fundamentals, but teams certainly practice bunting; it’s just that their extensive practice of how to field bunts is bearing more fruit. Per FanGraphs, the percentage of bunts that turned into bunt hits last season was 22.8 percent, the lowest mark since 2010.

The low percentage is doubly shocking because it’s come alongside the lowest raw total of bunt hits since the site began keeping records in 2002. There was a brief resurgence in 2011 and 2012, but the scant 441 bunt hits MLB saw in 2018 was down more than 300 from the raw total of 2002 and seems to be steadily dropping into a pit of nothingness from which it will never return.

Bunting hasn’t been popular for a while, but seemingly has its occasional benefits. For one, hitting is impossible and the advances in velocity, tunneling and pitch design have made all hopes of distinguishing stuff out of the hand and adjusting swing path in real time borderline futile. The art of hitting to using tendencies on location to fire off guess swings with enough intent to do major damage on contact is a lost one. Secondly, because hitting is impossible, teams are trotting out larger, less skillful players at premium infield positions because no one is putting the ball in play enough for it to matter. At some point it would make sense to draw in that defense with a surprise bunt if possible, and goad them into playing an inefficient setup.

Or at some point, the sport reaches a level of athleticism and fidelity of preparation that “hit an exceptionally weak grounder as a surprise” dries up entirely as a viable means of achieving the low reward of reaching first base. Or maybe we can just blame sabermetrics for killing it.

You need to be logged in to comment. Login or Subscribe
Eric Naftaly
Seems odd to me not to see an increase in bunt hits in the last three years. since getting a bunt past the pitcher's mound was being described as the easiest way to beat a shift for a hit. People admittedly don't do it all that often, but I'd expect at least some increase in tries and greater success since shifting got so much more frequent: 34,673 balls in play against shifts in 2018, according to Sports Info Solutions, up 35% from 2017 and around 1500% since 2010 and 2011.
Reply to Eric