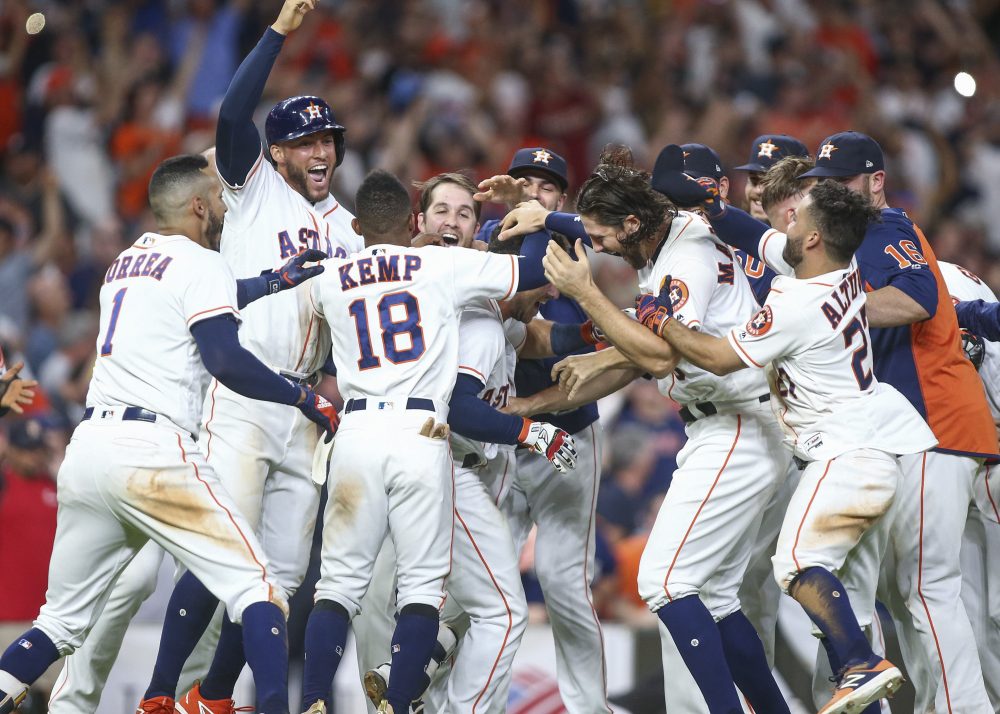 The middle class is disappearing. Resources are increasingly allocated with a select group of elites, while the rest of the population wallows and actively destroys their own resources to assume debt in the hope that times will be better further down the road.

But enough about baseball.

Seriously, folks, the standings are wild right now. There are approximately four verifiably good teams in the American League. Sure there’s the Indians, who are in first place in the AL Central largely by default. And there’s the Angels, who are a healthy Shohei Ohtani and a bullpen that doesn’t make you cry away from fighting back into wild card contention.

Everyone else already looks dead in the water. The rest of the field is either tanking, at the bottom of its contention cycle, waylaid by injury and poor investments, or the Athletics. Those four teams have it all going on.

The Astros, having just won the World Series, are a ridiculously good team. They got a championship and decided to magic up Gerrit Cole. They have a full-time Justin Verlander. They’re not fair, questionable bullpen and all.

Wins are capital in sports. The capital is currently consolidated among the elite.

There’s no end in sight.

It is humanly impossible to watch that clip and not have the Curb Your Enthusiasm theme playing in your head. The flutes hit the second the ball bounces off of Marcell Ozuna’s glove. Go ahead, try it. It can’t be done.

No, don’t tell me that you did it in the comments. I won’t read the comments. Your words cannot harm me. I am above this. I am legion.

Juan Soto owns a DeLorean. When it hits 88 miles per hour, you see some serious shit. I know this because he displayed his time traveling capabilities on national television yesterday.

You see, Juan Soto’s homer yesterday counted for May 15th’s game. He was in Double-A on May 15th. He’s now hit a home run before he made his big league debut. Rainouts are the new fuel for flux capacitors, not stolen nuclear materials.

Bartolo Colon is eternal. I look forward to watching him throw five four-run innings against the Orioles twenty years from now. He cannot stop, and he will not stop. Nolan Ryan may have thrown 100 MPH for decades and decades, but he is not Bartolo Colon.

The man they call Big Sexy is now the all-time wins leader among Dominican-born pitchers.

Furthermore, he’s one away from Dennis Martinez, who owns the wins record among all Latin American-born pitchers. He’ll get there. He’ll get the crown. Bartolo is immortal.

Jarrod Dyson is a bad man. That ball may not have made it over the wall, but it would have been off the top at the very least.

As they say, that’s what speed do.

The Mariners and the Yankees will begin a three-game battle of the titans when Seattle comes to the Big Apple tonight. It’ll be Marco Gonzales and Domingo Germán on the bump for the opener. I know you’re all probably tired of watching the Yankees, but the Mariners are the real attraction here. They’re really damn fun.

Next, check out the Rays and Astros at 8:10 ET . Justin Verlander is obviously the star attraction here, but Blake Snell is a rather fun pitcher to watch when he’s on. He’ll need to be against a rampaging Houston team.

For your West Coast game, uh, A’s-Padres I guess? Eric Lauer’s 6.20 ERA is the lower of the two starters’ and these two teams both have some fun players. So it should be a wonderful mess.

[Editor’s note: An earlier version of this post incorrectly said Dennis Martinez was the career leader in wins among all foreign-born players. No. Bert Blyleven of the Netherlands is that person.]

It's Brandon Nimmo!
Reply to Alan
grasul
You actually read the comments, you can't fool us (terrible badly...most of the time)
Reply to grasul
John Collins
Bert Blyleven (The Netherlands), not Dennis Martinez, holds the win record for foreign-born pitchers.
Reply to John
David Brown
Great catch, John, thank you. Updated the post to note your correction.
Reply to David