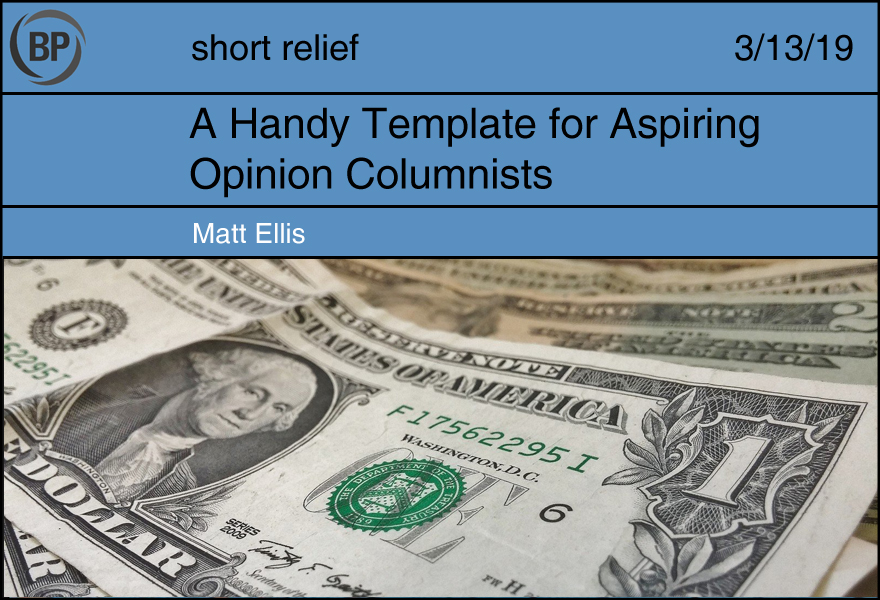 With the signing of (Late Twenties Player Two Years Off A Four-Win Season) for (Less Money Than Said Team’s Setup Man Earned In Arbitration) on Sunday, the story of Major League Baseball in (Current Year) continues to be one in which players and ownership find themselves at odds over the future of the game’s labor market.

For the (Small Number)th year in a row, (Large Number) players remain unsigned as spring training begins shedding its skin to enter the summer months of the regular season. It is a situation that seemed unthinkable when the last CBA was drawn up by the players’ union and the league, when the biggest questions seemed to focus around revenue sharing, drug testing, and the competitive balance tax. A mere (“2016” subtracted from “Current Year”) years later, players are asking why they didn’t see this coming, and what will be needed to do to avoid a strike in 2021, when the current agreement expires.

“Obviously it’s a drag for those of us who are looking for financial security,” said (Veteran Player On Two-Year Deal Who Said A Bunch Of Very Important Stuff About Labor Rights That Would Bore Your Readers Who Regularly Call In To Sports Radio, So Lets Make This About That Throwaway Line He Said At The End), “but my real concern is for the fans: can they say with full confidence their favorite clubs are doing all they can to bring home a championship, that their money as consumers of our game is well spent while (Generational Talent) remains unsigned?”

It is an impasse, however, which seems to be headed in one direction: a strike. But while players feel they have no option left to deal with the labor crisis, fans might remember the bad taste left by (Other Strike In Completely Different Historical Situation), in which (Something About “Millionaires” and “Billionaires” So As To Antagonize Class Divisions Rather Than Build Solidarity), or asking if they ever will want to even watch the game again. And who could blame them? With access to digital streaming and new television contracts signed between teams and local network subsidiaries seemingly every week, fans have arguably the easiest, and most affordable access to the game than at any point in its history. Never forget: (Some Mumbo Jumbo To Distract From The Fact That The Words In The Last Sentence Explain A Constitutive Element Of Why The Labor Crisis Has Exacerbated So Quickly). 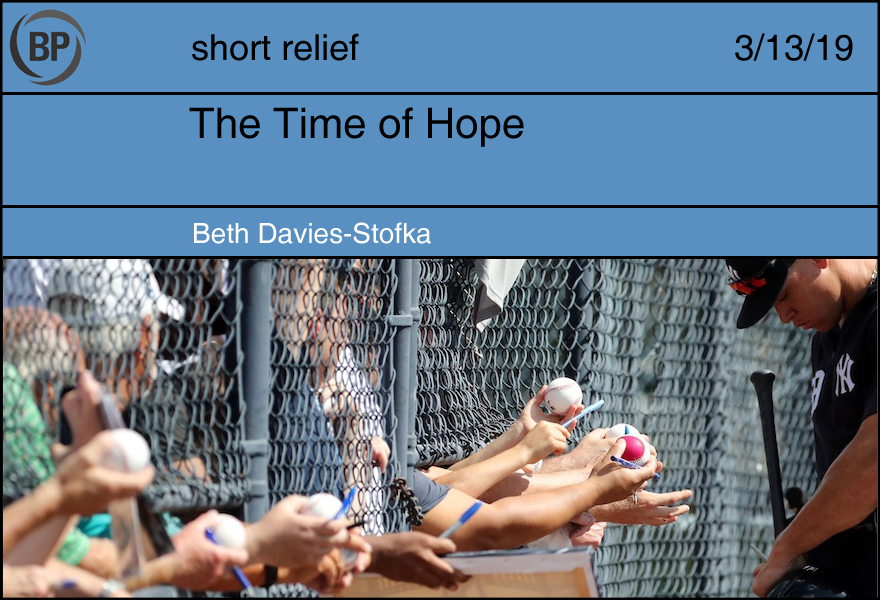 “A person’s whole life should be the time of hope!” — Søren Kierkegaard

Spring training is underway. The games don’t matter, but they’re fun nonetheless. It’s good to tune in and watch pitchers practice pitch sequences; watch outfielders work their legs while looking for the best route to a fly ball. It’s so good to hear the return of the familiar sounds of baseball: the favorite broadcaster, the white noise from the stands, the crowd’s excitement over home runs and double plays. It’s fun to see the young players having fun. It’s fun to start a new season. It’s fun to hope.

In one of his Moral letters to Lucilius, the Roman Stoic Seneca dismissed hope with a dark metaphor:

“Cease to hope,” [Hecato] says, “and you will cease to fear.”…Just as the same chain fastens the prisoner and the soldier who guards him, so hope and fear, dissimilar as they are, keep step together; fear follows hope.

But baseball fans are not Stoics. We’re not even particularly rational. We wait all winter, harboring hopes for cherished players and teams, and when spring finally comes we run straight into their arms. Plato called hope gullible, yet we hope. Descartes warned that there is no hope without anxiety, yet we hope. Spinoza warned that hope leads to superstition and we say, “Yes, we know!” And we go all in. We even get creative about it. We wear caps and team colors, we sit in the same seats or wear the same socks, and we hang signs from the bleachers. We invent rituals and routines, and send message after message to players, our fellow fans, and the gods. We do whatever we can think of to double-down on hope. We hope so hard.

In The Will to Believe, William James wrote:

What proof is there that dupery through hope is so much worse than dupery through fear? I, for one, can see no proof; and I simply refuse…to forfeit my sole chance in life of getting upon the winning side.

James was writing about religious faith, but he might have been covertly talking about baseball. Sure, we could start the season with skepticism. “It’s only a matter of time before so and-so gets hurt/traded/DFA’d,” we could say. “[Team name] only looks good on paper; they’ll collapse behind that rotation.” Etc. We could spend our spring that way, if we want. But skepticism isn’t smarter than hope, nor is it better informed. If I’m going to be duped, let it be by hope. It’s an even choice after a long, tough winter, and hope is the winning side. 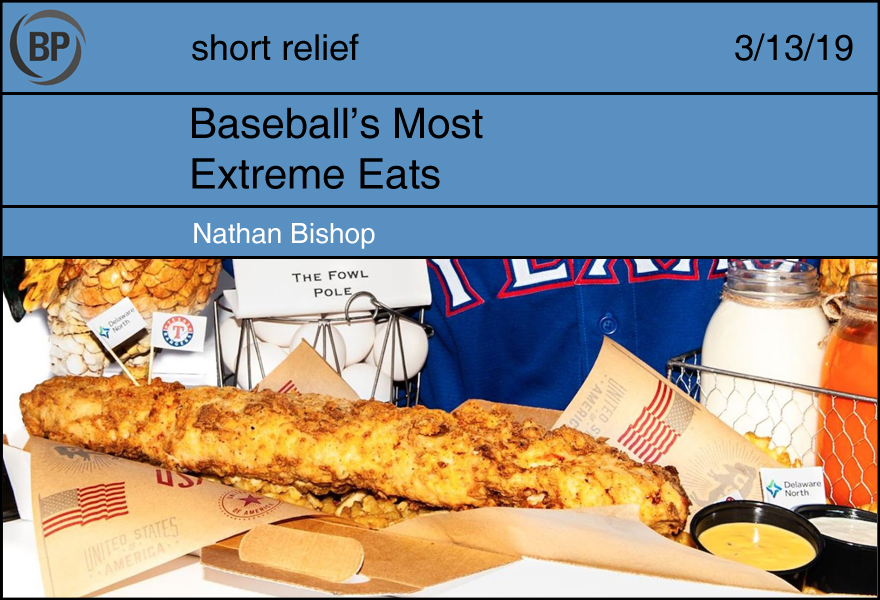 Like most industries, baseball marketing apes whatever success it sees. The Texas Rangers, long the industry leader in daring their fanbase to kill themselves through digestive malpractice, have seemingly struck gold again with the unveiling of The Fowl Pole. It’s description reads like a murder plot hatched from the killer in the film SEVEN (1995):

“It’s a single, 2 pound, breaded chicken tender that comes on a bed of waffle fries with ranch & honey dipping sauces.

It comes in its own carrying case.“

Because this is America, purchasing and consuming The Fowl Pole, at the wrath of your heart, bowels, and perhaps your own very god-given soul is not only allowed but in fact EXTREMELY COOL because FREEDOM. Inevitably, as the wheels of capitalism grind ever on, other baseball teams are hopping on board and tempting their fans to lop off years from their lives for the sake of a quality lead-in shot from commercial. Here’s a sampling of what’s on offer.

Cincinnati Reds: The Red Square ($34.95) offers fans 15 minutes to submerged in classic, world-famous Cincinnati Highline Chili, contained within a transparent cube made of reinforced-glass. Purchasers may eat all the chili they can, and in fact are encouraged to do so, as the lack of non-chili will lead customers to find breathing difficult. Once time is up (or the purchaser elects to tap the emergency release valve) they are flushed from the container, and sprayed off, to the delight of family and friends in attendance.

Seattle Mariners: The Crab Walk ($49.50) tests the courage of even the heartiest Mariner fan! These hearty souls walk/run over a 150-foot obstacle set above a pit full of Giant Coconut Crabs. It may almost be St. Patrick’s Day, but watch your step because even if you’re wearing green, a fall into the pit is sure to get you pinched! (For an additional fee of $14.95 fans may deep fry the crab of their choice. Served with spicy aioli. Bundle package of crab meal and highlight video of your walk also available, prices starting at $29.95.*)

*Cost determined by opposing team and market price of crab

New York Yankees: Hey It’s Pizza Here ($74.25 on weekend, $64.75 on weekdays) re-creates the thrilling cultural spectacle of America’s greatest city, in the stadium of its greatest team! Fans sit blindfolded on a stool as a series of famous, New York Style pizza slices are forcibly shoved into their mouths. Each slice comes with its maker shouting insults at you, and telling you about why his pizza is the best! Truly an experience as New York as the subway and getting swamp ass from walking two blocks in July humidity. Wash it down with one of our craft Bud Lights, available in a souvenir 22 oz mug for $19.95.

You need to be logged in to comment. Login or Subscribe
Kristoffer Ericson
I want The Fowl Pole, but I'll need some ketchup.
Reply to Kristoffer