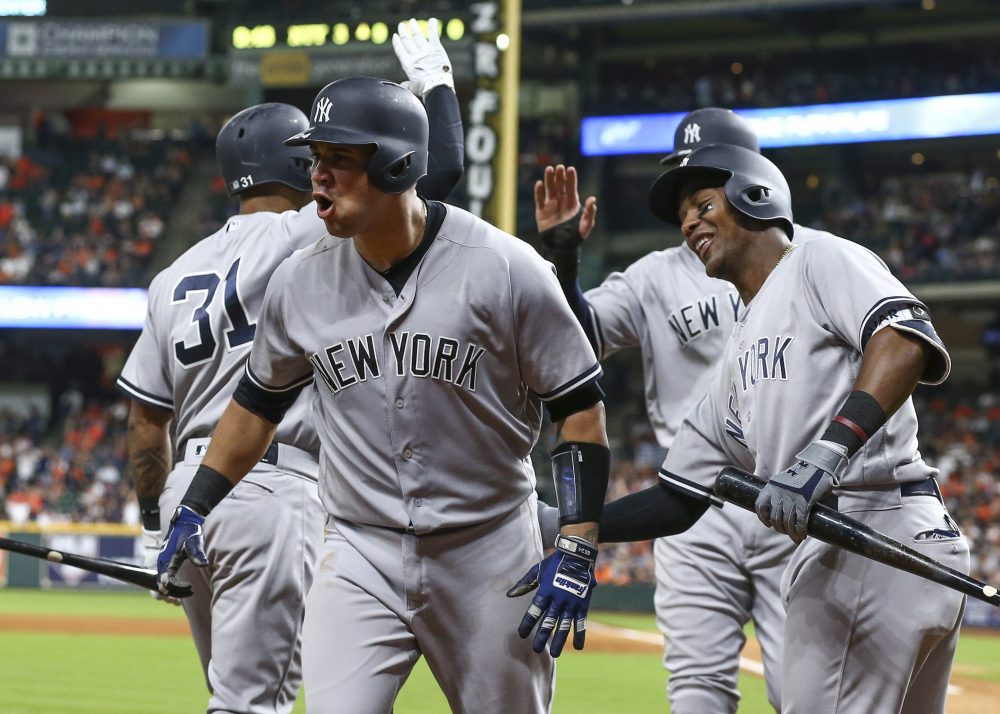 PECOTA likes the odds of the Houston Astros and New York Yankees meeting for a postseason series: Both teams possess a 90 percent or greater chance of making the playoffs according to the projection model. This matchup represented the crème de la crème in the American League, and while it is far too early to use the phrase “playoff atmosphere,” this game played under the backdrop of October would’ve been an all-time classic.

Justin Verlander was on the hill for the Astros, and he’s rarely been better in his storied career:

Verlander worked eight shutout innings, retiring the final sixteen hitters he saw and matching his career high with 14 strikeouts. On the other hand, New York starter Jordan Montgomery threw just seven pitches before leaving with an injury. But the Yankee bullpen was up to the task. Domingo German worked four innings, followed by one apiece from Chad Green, Dellin Betances, Dan Robertson and Aroldis Chapman, and the unit shut down the Astros to match.

The game went into the ninth inning scoreless, and Houston turned it over to Ken Giles. Giles surrendered a single to Aaron Judge and a double to Didi Gregorius, then struck out Giancarlo Stanton. Gary Sanchez was next—and with first base open, the Astros decided to pitch to him. It took just one pitch for Sanchez to make them regret that strategy:

Aroldis Chapman came on to slam down the bottom of the 9th, and the first game of the year with a real postseason feel to it went to the Yankees.

When you’re eight years old, playing that scenario in your backyard, the ball always leaves the yard. Real life doesn’t always feature such a happy ending. And sure enough, Brantley’s heroics were washed out by…

… Joey Gallo and Isiah Kiner-Falefa three innings later. The Rangers went back-to-back in the 12th, and 8-6 stood up as the final score in Cleveland:

A game-winning home run in the thirteenth inning would be a qualifier for the Rundown more days than not, but Tuesday was not an ordinary day by anyone’s standards. Jorge Soler’s bomb drove in three, which was just enough to outweigh the two runs Boston would answer with in the bottom of the 13th and locking up the eighth win of the season for the Royals:

The Nationals dumped ten runs on the Pirates in just two innings, en route to a 12-4 win. Matt Adams turned in a multi-homer game:

Bryce Harper went the opposite way for a moonshot of his own:

And even Max Scherzer, who struck out eight on the hill, got involved with the offensive fireworks:

It was unseasonably warm and humid Tuesday night in Chicago, with the wind blowing out to the left field alley—a perfect situation for power hitters. And sure enough, Charlie Blackmon—the first hitter of the game—capitalized on the situational advantage and gave his team the early lead:

Not to be outdone, Anthony Rizzo led off the bottom of the first with an opposite-field bang, too:

The Cubs’ leadoff man homered, and they were done scoring for the day. Colorado took the game, 3-1.

Yadier Molina is old. The Chicago White Sox are young. Father Time will inevitably turn Yadi into a memory as the Sox strive for contention in coming years—but on Tuesday night, it was the senior citizen breaking the hearts of the young and hopeful. Score one for Team Get Off My Lawn.

Travis Jankowski showed promise in 2016, but injuries and ineffectiveness effectively cost him his 2017 season. Now, he’s on the outside looking in when it comes to playing time, waiting for scarce opportunities to turn heads and make the case for a bigger role. Given a turn in right field Tuesday night, Jankowski got one of those opportunities with Evan Longoria at the dish, and he didn’t let it go to waste:

Danny Duffy and Drew Pomeranz have both been roughed up in the early going of the 2018 season, but both pitchers have the ability to dominate a lineup top to bottom. Maybe you’re in for a 2-1 pitchers’ duel, maybe you’re in for a 15-14 slugfest. Either is perfectly plausible in this game.

Corey Kluber takes the hill for Cleveland with the Rangers in town. Fantasy owners, take heed and bench your healthy Rangers tonight if you can.

Fernando Romero will be making his Major League debut on the hill for the Twins against Marcus Stroman and the Jays.

The NYY-HOU pitching matchup—Severino vs. Keuchel—suggests another unseasonably intense game in store for those two teams. We’ll see if that holds up as well on the second viewing.