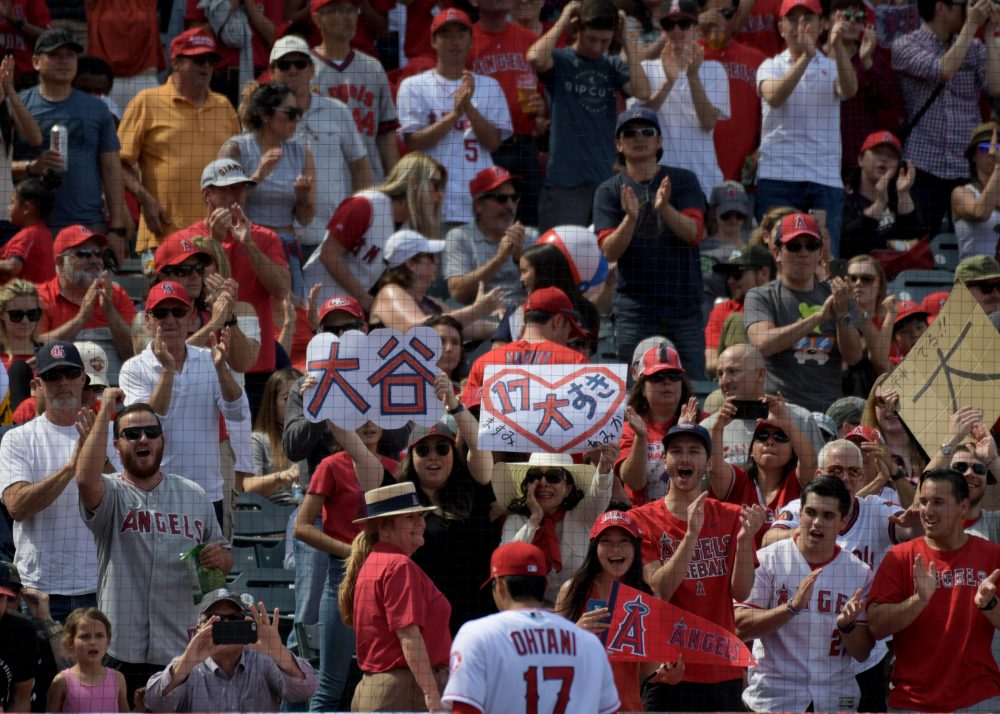 If I have to write about Shohei Ohtani every week this season, I have no issue with that—because it seems as though every time the kid plays, something incredible happens. If Ohtani’s not hitting home runs when he’s the Angels’ designated hitter, he’s nearly pitching a no-hitter and striking out 12 over seven scoreless innings in a 6-1 win against the Athletics.

The 23-year-old has become must-watch TV during the first ten days of the season.

Ohtani retired the first 19 batters he faced Sunday. He used a mix of mostly fastballs and splitters to leave hitters off balance, and eight of his strikeouts came on the splitter. He threw 91 pitches, 59 were for strikes, and he was throwing gas. His fastball averaged 96.6 mph, but he dialed it up to 99.6 mph later on in his outing. He also threw a 68.5 mph curveball, which is ridiculous. Imagine facing a guy who can go from 99 mph one pitch to 68 another. That wouldn’t be a lot of fun—and it wasn’t for the A’s. Ohtani’s pursuit of perfection ultimately ended when he gave up a one-out single to Marcus Semien in the seventh.

Ohtani walked one batter, Jonathan Lucroy, who also was the only Oakland batter to not strike out. He also escaped a jam in the seventh when Oakland managed to get two guys on base with one out—but Ohtani got Khris Davis to ground out, and he struck out Matt Olson to end the inning and the threat. He was pretty pumped too.

Huge inning for Shohei Ohtani! After pitching 6.1 innings of perfect ball, gets in a jam with 2 on and 1 out. Induces a soft tapper for the second out, then whiffs Matt Olson for the final out. Stayed calm and confident in the moment. #Angels #Clutch pic.twitter.com/M0ERkLelpz

The excitement around Ohtani’s arrival was shrouded with some caution as well. No one knew how the Japanese player would adapt to the major-league game or how well his pitching and hitting would stack up against MLB hitters and pitchers. When he had trouble in spring training, some people were already declaring him a bust, but Ohtani’s proven those people wrong in a big way, and if these first 10 days are any indication Angels fans will have a lot to cheer about for years and years to come.

Michael Brantley made his triumphant return to the Indians on Friday night and he didn’t injure himself again. That’s a good thing! He actually hit what turned out to be the difference in a 3-2 Indians victory over the Royals. Brantley, who was coming back from October surgery on his right ankle was nervous Thursday night. He told reporters, “I couldn’t sleep — absolutely.”

Then he went out and hit a two-run single. What was there to be nervous about?

Carlos Gonzalez and the Rockies also made a return Friday night to Coors Field for the home opener against the Braves. Gonzalez, who didn’t expect to be a Rockie again in 2018, did well in his home debut in front of a freezing crowd in 27 degree weather. Gonzalez hit an RBI triple in the first inning and a home run in the fourth inning, but it wasn’t enough as the Braves won 8-3.

The Dodgers and Giants were postponed Friday night and it marked only the sixth time there’s been a rainout in AT&T Park history. The two teams of course returned to action Saturday and something pretty special happened. But before we get to that, let’s talk about what the Phillies did to the Marlins on Saturday.

The Phillies humiliated the Marlins. In the bottom of the third, Altherr hit their second grand slam of the game.

Now back to the Giants: It is often said that variety is the spice of life and Saturday, baseball fans were treated to a variety of walk off options. First, the Giants treated their fans to a walk off home run in the bottom of the 14th inning while down a run to the Dodgers. Not only that but it was special because of who hit the home run and because of how the rest of his day went. Andrew McCutchen hit the blast to left-center field, sending Giants fans home jubilant and exhausted.

McCutchen went 6 for 6 on Saturday. The last player to go 6 for 6 and win a game on a walk off hit was Johnny Damon with the Yankees on June 7, 2008. Damon hit a walk off single in the bottom of the ninth inning to win the game for New York.

The Rockies recovered from their loss in their home opener to win on Saturday via a walk off walk in the bottom of the 10th inning to win 3-2.

The Astros later won on the funniest walk off since Luis Castillo at Yankee Stadium in 2009. I don’t think anyone can believe what happened on this play. Alex Bregman popped up and Eric Hosmer overran the ball. I mean, what on earth happened here?

How do you show your face around town after a gaffe like this? Oh right, Hosmer plays in San Diego. He’ll be fine.

Charlie Culberson traveled a long way to make this out on a foul ball hit by Carlos Gonzalez on Sunday.

It’s a good thing those seats were empty.

There are 13 games on the schedule which is kind of unusual for a Monday that isn’t Opening Day so you have a lot of choices. Here are just a few:

First up, you can watch the Mets play the Marlins. Noah Syndergaard is pitching against Jose Urena. Watch for Syndergaard if nothing else. He will probably strike out a bunch of Marlins. (7:05 p.m. ET)

Or maybe you want to watch the Brewers play the Cardinals. Jhoulys Chacin will be facing off against Miles Mikolas in a matchup of teams who may fight for a NL wild card spot. (7 p.m. ET)

The Angels are traveling to Texas to play the Rangers as Garrett Richards makes the start against Doug Fister. The people in Texas missed an Ohtani start in person by one day. At least they’ll get a chance to see him hit. (8:05 p.m. ET)

And the Diamondbacks make their first visit to San Francisco to face the Giants as Zack Godley starts against Derek Holland (10:15 p.m. ET)