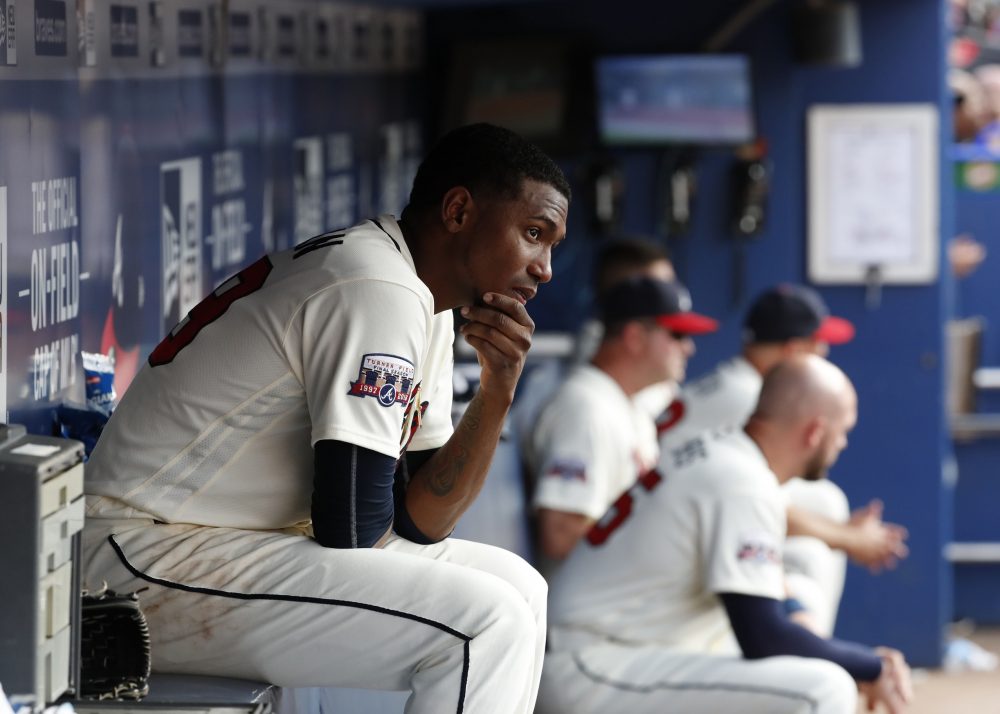 Imagine Schrodinger’s cat, but instead of maybe killing a cat, simply wrap a present and put it under a Christmas tree. Now imagine yourself, six years old, on the other end of this experiment. As the gift sits for weeks leading up to the big day, nothing about it changes, and yet its expected value fluctuates wildly, as puzzlement transforms into guarded hope and then gleeful expectation. The night before Christmas, you can’t sleep; as a child, you can’t even imagine what Christmas day will feel like, even though you had one just last year. And then, the moment arrives, and the last shred of doubt is dissipated as you tear through the paper and find what you’ve hoped for all along. Only, the process isn’t complete; now the moment you couldn’t imagine is actually happening and you have this wonderful new thing, but no longer the joy of waiting for it.

Gartner, the research and advisor firm dedicated to IT insight, has a tool they call the Hype Cycle for Emerging Technologies, which is utilized to educate their clients “on the promise of an emerging technology within the context of their industry and individual appetite for risk.” The Hype Cycle covers how our expectations for a technology change over time. Gartner’s specific insight prescribes phases of expectations through the technology life-cycle. Effectively, the Hype Cycle for Emerging Technologies simplifies the ride of emotions and expectations by helping individuals weed through their own perceptions and media-driven outlooks to identify truly disruptive technologies.

The thing about the Hype Cycle is that it doesn’t just apply to Emerging Technologies, as Gartner would have you believe. Rather, it works for just about anything emerging—including baseball players. 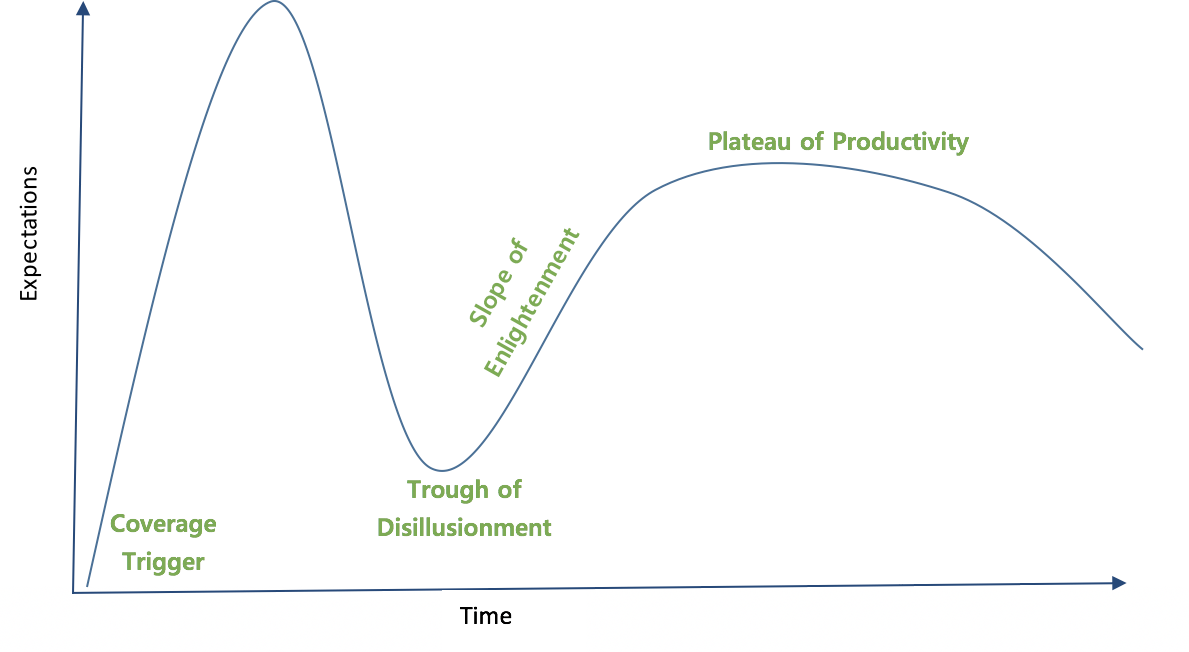 I will borrow the lingo, changing only the trigger, in considering the Hype Cycle for Baseball Prospects:

All these terms and conditions sound fine on paper, but the applicability of the Hype Cycle really hits home when we think through case studies. Just as Gartner does annually with emerging technologies, this year’s prospects can be placed on the Hype Cycle. The 2018 version might find Ronald Acuna in the Peak of Inflated Expectations, while Austin Meadows might find himself squarely in the Trough of Disillusionment. Rather than tackling that exercise from the outset, fully understanding how the Hype Cycle can impact perception is best understood by examining a player already established in the majors. There are such a large variety of ways that a player can work his way through the Hype Cycle that calling any one player an archetypical Hype Cycle demonstration is unfair to both that player and the flexibility inherent in the phase descriptions. However, Julio Teheran hits each of the phases and offers a meaningful example for exploring the Hype Cycle. 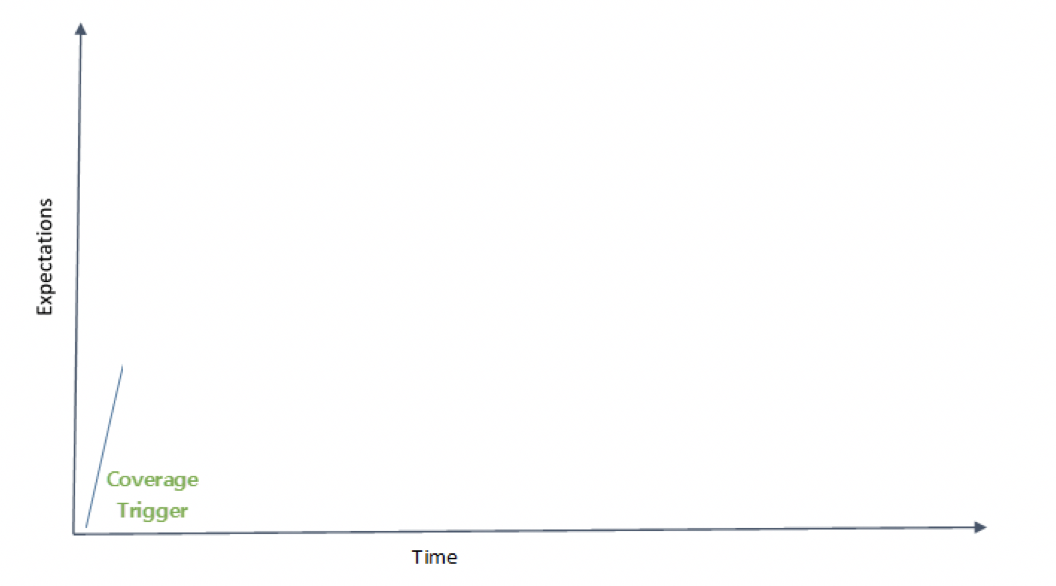 Julio Teheran signed with the Braves for $850,000 at age 16 in 2007. While that figure was not the top of that class and was just the third-largest handed to a teenager from Colombia, Teheran was widely liked and landed as BP’s no. 7 Braves prospect in 2008 as a 17-year-old. From Kevin Goldstein’s 2008 piece:

Some Braves officials feel that Teheran’s upside ranks with that of any pitcher in the minors. He has fluid mechanics and already pumps out mid-90s gas, with room for more once his body fills out. He already shows advanced feel for a curveball and has excellent arm action on his changeup.

With Teheran, the Coverage Trigger isn’t as clean as it was for guys like Yoenis Cespedes or Tim Beckham. Cespedes landed in the baseball lexicon the day that his YouTube workout video went viral. Beckham became famous on June 5, 2008, when the Rays selected him first overall out of high school. Teheran’s $850,000 signing bonus wasn’t the headline news like the $4.25 million that Michael Ynoa would receive one year later, but as a top-10 prospect in the Braves system, Teheran is certainly on the radar for those diehard Braves fans.

The Peak of Inflated Expectations 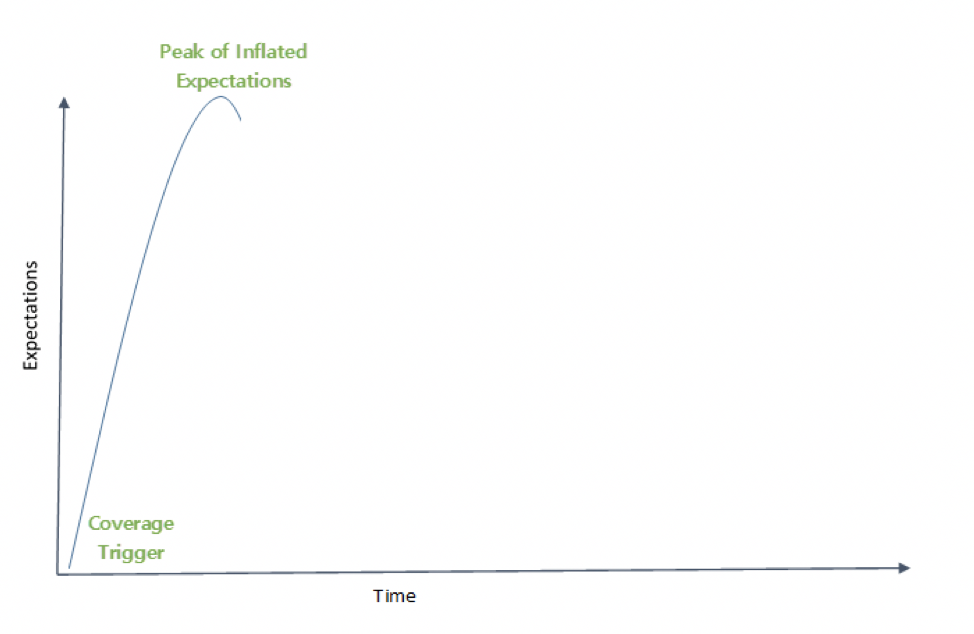 Teheran followed a straightforward path to inflated expectations. He made easy work of the lower tiers of the minor leagues and quickly climbed to the top of the prospect rankings. After two years in the low minors, Teheran climbed to no. 33 on BP’s pre-2010 top-101 list. Teheran rewarded BP’s optimism by posting a 2.59 ERA while making starts across both levels of Single-A and for the Double-A Mississippi Braves at age 19. His fastball, changeup, and breaking ball were all described as excellent. His age-20 season in 2011 was similarly impressive: a 2.55 ERA in Triple-A across 144 innings.

He’s been nothing short of superb in Triple-A for most of the 2011 season. And it’s been consistent, with 1.80 ERA in April, a “balloon” up to 3.20 in May, back down to 1.10 in June and 1.06 over four starts in July. Scouting report: Teheran has three pitches that are above average or better, all of which he can command pretty well. He throws his fastball into the mid-90s consistently and complements that with a very good curve as well as an excellent changeup. He’s got plus mound presence.

Teheran was now a top prospect, consistently ranking as a top-five prospect in the game with the likes of Mike Trout and Bryce Harper. At a time when Trout and Harper were (rightfully) setting the baseball prospect world on fire, it was easy to believe the hype of Teheran. While distinctly a step below those two, the pitcher was often mentioned on the same page. Some scouts had their doubts, especially given Teheran’s size, but it was impossible to argue with the stats.

The Trough of Disillusionment 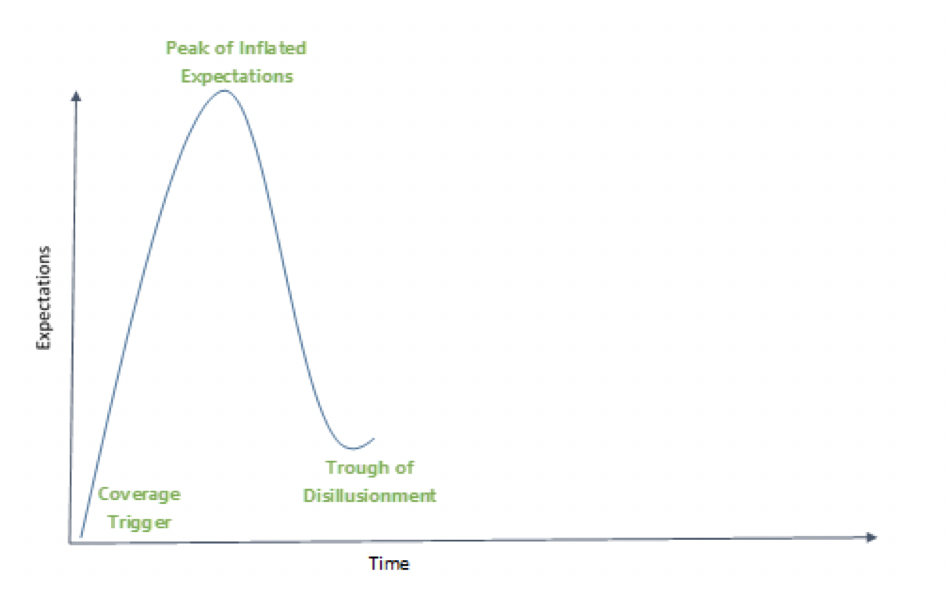 Teheran got a taste of the big leagues at the end of that age-20 season and he looked a bit overmatched, so the Braves started him over at Triple-A in 2012. The bad news here—the part of the story that sends Teheran through the Trough of Disillusionment—is that the 21-year-old managed just a 5.08 ERA in 131 Triple-A innings that year. Combine the bad taste from the previous year’s September call-up with this hearty adjustment period against minor leaguers, and Braves fans soon began to worry.

BP still listed him as the no. 52 prospect in baseball heading into 2013, but that was worse than he had ranked pre-2010. This post from Braves blog Talking Chop sums up the concerns from scouts and fans alike:

Curveball can be a plus pitch when it’s on, but it’s rarely on, often coming in a slurvy, highly hittable slop. Made changes to his delivery this season, which hurt his stuff and caused him to struggle all year. Strikeout stuff hasn’t turned into strikeouts. Control isn’t where you’d like it to be for a top prospect.

Teheran’s fall from grace was likely due to a bit of prospect fatigue, as the young guy had been in the diehard vocabulary since 2007/2008. We’re now heading into 2013 and the once super-promising prospect is fresh off posting an ERA north of 5.00 in Triple-A. He’s also lost a touch of velocity. 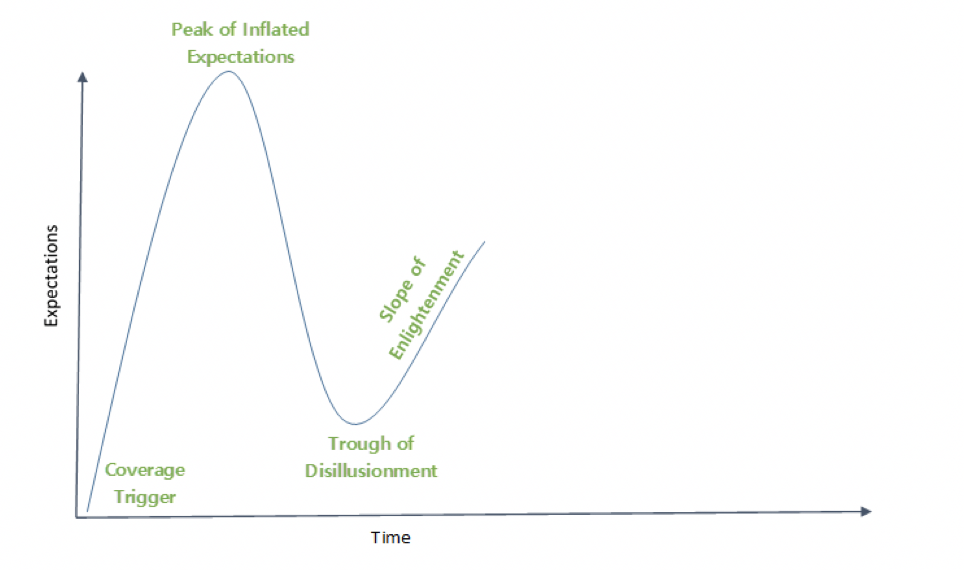 Teheran earned a spot in the Braves’ rotation in 2013 and found a usable slider that had been lost in 2012. All the 22-year-old did was post a 3.08 ERA in 180-plus major-league innings. The right-hander was making good on his prospect status, working a fastball that averaged 92.8 mph and touched 96. This is the type of production that we expect from a top-10 prospect. All is good in Teheran world.

Then 2014 comes and Teheran posts a 2.89 ERA in 221 innings. All is really good in Teheran world. He’s definitely a major leaguer and he even got an invite to the All Star game. But there is some cause for concern. FIP doesn’t really believe the raw ERA figures and he’s lost almost a full mile per hour from 2013. Still, that disillusionment sentiment that tasted so bad in 2012 is long gone.

The Plateau of Productivity 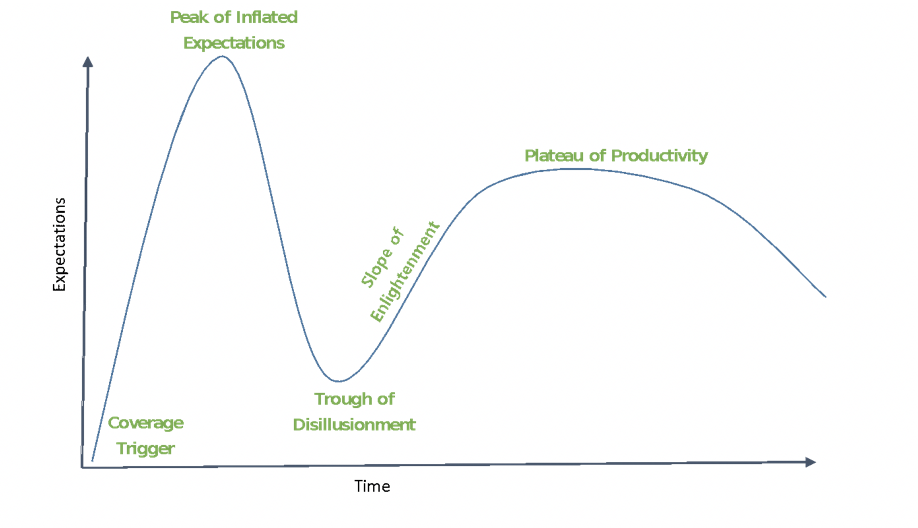 The Slope of Enlightenment has a way of leveling off prior to reaching the peaks of expectations. In Teheran’s case, his status as a top-five prospect insinuated a long streak of All-Star appearances and perhaps a few Cy Young votes would soon be heading his direction. Teheran is probably a full step below that lofty peak. He’s much more a reliable starter than “ace” material. While there have been All-Star games, he’s also posted multiple seasons with ERAs north of 4.00 in his young career.

The plateau isn’t a smooth line and our perception of Teheran is radically different today than it was in 2014, when David Cameron ranked Teheran among the top 50 players in terms of trade value. That’s fine. He might go out and pitch great in 2018, proving to be good in even years just like Jon Lester. Braves fans would be happy with that.

You’ll also notice that the plateau of productivity in my graphic tails off toward the end. That’s intended to show the traditional decline in performance as players age. If you’re a stickler for units of measure, consider that X-axis to be logarithmic, with the first few stages most often occurring within a few years and a more lengthy stage further along the axis.

The Hype Cycle is far from an exact science in the technology space, and that’s certainly the case when applied to baseball as well. Every player develops differently (Miguel Cabrera and J.D. Martinez became sluggers in their own ways), is faced with different obstacles (Stephen Strasburg and Jake Arrieta struggle to find consistency because of different root factors), and is even covered differently (Mike Trout’s golden boy image contrasts nicely with Bryce Harper’s bad boy hair flips). Further, our initial take is often misinformed by small samples.

The Hype Cycle for Baseball Prospects is neither infallible nor necessarily confined to the minor leagues, and each prospect is a unique individual certainly entitled to their own ups, downs, and in-betweens. But with that said, it seems to be a useful tool to borrow as we, fans, writers, and scouts alike, find ourselves enthralled in the same emotional turbulence that seems bound to befall our favorite emerging players.

You need to be logged in to comment. Login or Subscribe
Austin Conley
Some names to remember from the hype cycle: Sil Campusano. Carlos Pena. Phil Nevin.
Reply to Austin
RW Miller
Sean

Great article. Before I retired I worked some with Gartner on some projects, but your assimilation of their model with baseball prospects was spot on and insightful. What a fun read as you helped me ascend the Slope of Enlightenment.
Reply to RW