The end of baseball season exposed us to a phenomenon that seems rooted in the concept of “let people smell the roses while they still can,” which I have only been able to term “The Speculative Farewell.”

The Wrigley Field faithful gave Jake Arrieta a rousing ovation when he walked off the field after 6 2/3 strong innings in Game 4 of the NLCS, perhaps because it was the only thing for the Cubs that went right during the NLCS, but moreso in recognition of his 4 1/2 seasons of splendid play that he had offered, and that he was a 31-year-old pending free agent represented by Scott Boras, and this was likely their chance to say goodbye and thank you.

In a similar way, Canadians packed the Rogers Centre to applaud Jose Bautista in his final home series, in acknowledgement of his standout 10 season in Toronto, but also that he’s old, bad, and probably wasn’t going to be around anymore.

Not every player gets a conclusion as concrete as Derek Jeter, David Ortiz, Matt Cain or Paul Konerko, who literally watched the White Sox unveil a statue of him during his final homestand. The culture of every fan thinking like a GM is mostly insufferable, but it does result in a populace that has a good idea of when someone is on their way out.

Arrieta and Bautista are prideful dudes, who take no pleasure in public acknowledgement that their season is about to be over, or that they’re toast as players. But the beauty of the speculative goodbye is it never has to be goodbye, it can just be “we love you,” or “you’re appreciated.” It’s easier to change “you’ve been great,” to “you were great,” in your memory than to turn cold silence into warmth.

Seven years ago, I was headed out for a weekend trip on a Friday night, when my plans were interrupted by the news that my childhood dog–living at my parents’ house by this point–had cancer that had reached his lungs and brain. He was having seizures and could only expect more suffering, and we made plans to put him down on Monday, after a Sunday farewell full of steak and petting. Yet while driving out of town, I couldn’t shake the idea I should check on him, and added a detour. Instead of a comforting check-in before our Sunday farewell, I found him lying in a pool of vomit and feces after a major seizure. He died in my arms while I was still washing his fur, and that last little look of recognition and wag of his tail served as his goodbye. The speculative farewell wound up being the real one.

I’m not sure how flattering or apt it is to compare a departing baseball player is to a dying pet, but they’re both seemingly constant, steady, daily presences in your life until they’re not. There are seemingly endless opportunities to shout at them with love until there are none, and that baseball has somehow, in all of its fetishizing of cold efficiencies, has somehow become the haven for standing ovations, and outpourings of affection just in case, is a good thing to hold dear, and work to continue.

I’m increasingly disinterested in work. Not in work, in jobs; in my job. Jobs are fine, and I have one so I can buy shoes and salad, and be warm, but I don’t like it. I’d rather write, but instead I go to an office everyday, and that office is overly air conditioned, even in the winter. I have all these conference calls, and have to endure co-workers who microwave fish for lunch. I have to do all of those things, and for what, salad? For shoes?

It’s not that I don’t like hard work. We should all work hard. There’s a satisfaction that comes at the end of a day of hard work, to feeling bone tired. You’ve done Something. Maybe you made something entirely new. A whole new thing! What a thing to have accomplished, this whole new thing. Working hard is good. But we’re expected to do it so often, at our just fine jobs, in rooms that are too-cold, instead of watching baseball or writing. Instead of working hard at the things we like.

Baseball is also a job. Baseball players travel for business, and have work friends, and roll their eyes at their boss, and at teammates who microwave weird-smelling things in the breakroom. We distance ourselves from them, these union folk, because they make all that money, but they spend time away from the things they like just like we do. 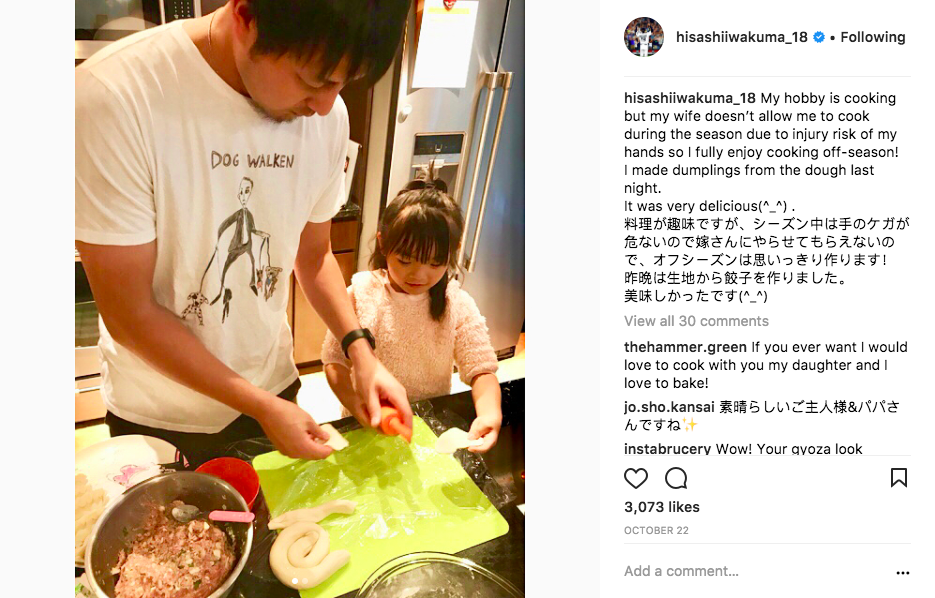 Hisashi Iwakuma loves to cook. It is his hobby. But during the season, his wife won’t let him cook because he might injure his hands. He just wants to wear a punny Christopher Walken shirt, and make dumplings, but he can’t because he has to go to work in the morning. This part of himself he denies, at least for a time. Because he has a job.

We have to do it, but we give up so much to be warm.

The hiring of manager Gabe Kapler has been the primary off-season news of note for the Philadelphia Phillies, but the Phillies added another former player to their front-office fold: Sam Fuld. Fuld played nine years in Major League Baseball, including stints with the Twins, Athletics, Rays, and Cubs. While not overly impressive at the plate, Fuld exited his playing days with a legacy of catches like this one:

Fuld’s official title is “major league information coordinator” and the role will ostensibly put to work the analytical skills Fuld honed while completing a degree in economics at Stanford University to further augment the Phillies’ new interest in data-driven decision-making. However, as Stanford’s Founding Grant describes, there is in Fuld’s new position a multitude of opportunities for “the cultivation and enlargement of the mind.”

I look forward to Fuld’s contributions to the team, which will certainly be something like this:

Sam Fuld enters a meeting: “Guys, I know some of you are pretty familiar with Hunter Pence’s habits at the plate, but you might want to have a look at what I’ve found on his approach to changeups ahead of Aaron’s start. Also, did you know that giraffes’ horns aren’t like true horns at all? They’re bony protrusions—present even from birth—and they’re covered by skin and hair, rather than the keratin sheaths found on the horns of pronghorn. In pronghorn, those sheaths are shed each year, and it’s the sheath that branches, not the actual horn. True horns don’t branch or shed. So the two things aren’t that much alike, but weirdly enough, the giraffe is the pronghorn’s closest living relative, biologically speaking.”

Sam Fuld enters a meeting: “Hey, Dusty. Here’s what I’ve got on the Reds’ starters’ time to the plate. You know what’s really neat? The word ‘dust’ has undergone very little orthographic change since the word’s earliest recordings in English in the ninth century. I mean, of course that’s Old English, not modern English, but that’s really steady, you know? Just a few temporary vowel shifts—to be expected, of course, given everything that was happening in the development of English between the tenth and fifteenth centuries. Anyway, let me know if you have any questions.”

Sam Fuld enters a meeting: “Oh, Rhys, look out for the slider if Martinez gets two strikes on you—he throws it nearly half the time. Foxes aren’t members of the genus Felidae.”

Sam Fuld enters a meeting: “Relatively small sample size, of course, but Blanco’s been solid against Scherzer. If you want to give César a day on the upcoming road trip, Scherzer’s start is a good one. Also, Andrés Eloy Blanco, the Venezuelan poet, was really good against dictatorship. He and the other members of the Generation of 28 were an instrumental part of Venezuela’s transition to democracy.”