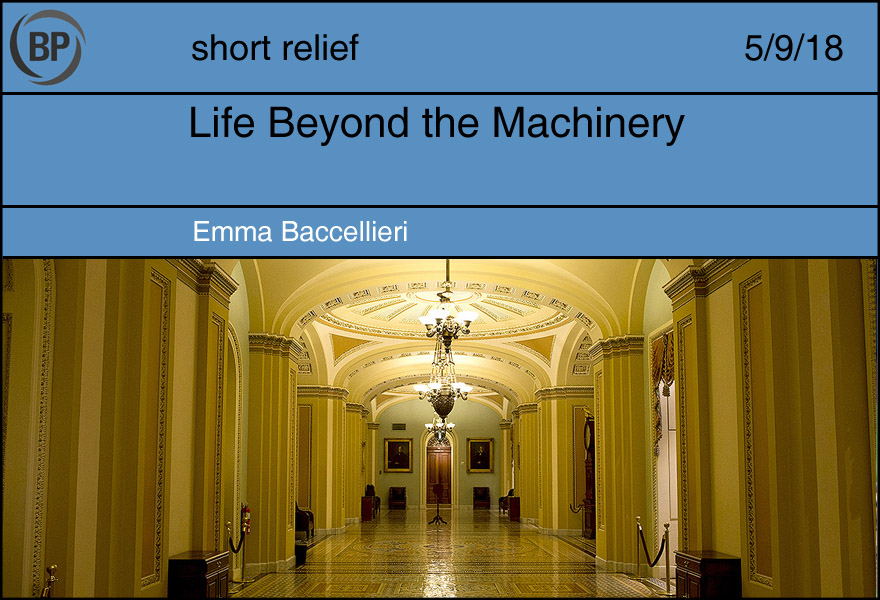 The summer that I was 20, I worked in the D.C. bureau of a newspaper chain. It was a pretty good gig, so far as these internships go: I got to do some real reporting and make a stupid face in the background of a White House press briefing on C-SPAN2, and it paid above minimum wage. (That last part being the most remarkable.) But much of my time there was spent on Capitol Hill, and I very quickly came to hate it.

Every Tuesday, I would go to the Senate for lunch—not to eat, but to participate in the long-standing tradition of weekly party caucuses held over the meal. The Republicans have a buffet in a room on one side of the chamber, Democrats on the other; a cadre of reporters wait outside to grab the senators as they leave and talk before they head back to their offices. When the doors open, everyone jumps to be first in front of the same tiny handful of lawmakers. There aren’t too many questions asked. Instead, there’s an awful lot of talk about…. and that talk tends to be almost entirely about process, rather than substance. The language is inhuman, with everything discussed only in the most mechanical terms of its political currency: votes, mostly, but the looser and pricklier categories of favors and capital and power, too. Nothing else has any value, and so nothing else is talked about.

That’s all hardly an original observation. This machine has worked in this fashion for a very long time, and it works like that for a reason and will keep working like that, perhaps (hopefully?) forever. But to see it up close was to learn—every week, in ways that changed slightly across the summer but always felt equally frustrating—that all of this was very serious, and yet no one seemed to take it seriously. Oh, they took the mechanisms of it seriously. Those mechanisms, and the larger political process that they created, were not seen as a means to an end. They were an end in and of itself; they were the point of the whole damn exercise. They were sacrosanct. The products of the process—and, more than those, the people affected and changed and killed by those products—were never a concern, or, at least, not the primary one.

After I graduated college, I did a little more work in political reporting, and then I got ridiculously lucky by a couple of turns and ended up writing about sports. It did not take long for me to be struck by the opposite of the feeling that had hit me so strongly in politics: that most of this was not too serious, and yet everyone seemed to take it too seriously. Through a grind of daily discussions on the value of one prospect package over another and the importance of playing the right way and the need to use K% over K/9, the fact that baseball is fundamentally meant to be fun quietly undercut it all, out of place and generally forgotten.

This is all to say that I’ve come to love Short Relief very much, precisely because it takes baseball just as seriously as it should be taken. It finds the beating heart of baseball and takes it very seriously, and it takes the idea of loving baseball very seriously, and then it recognizes that most of the rest is generally fun or weird or stupid and should be treated as such. I’m leaving Short Relief now as I write about baseball somewhere else, but I’m infinitely grateful to have been part of a space that so clearly and beautifully cares about the things that matter most. 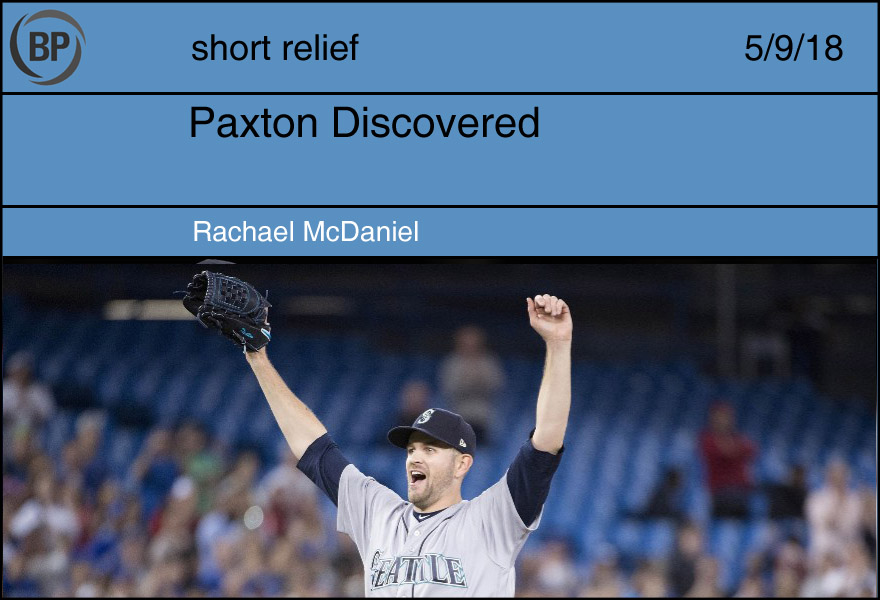 A no-hitter through six. That’s when everyone starts paying attention, even people who aren’t fans. No hits through five, even though it’s only three fewer outs, just seems like less of an event. But 18 outs is something. That’s a game worth switching to. After 18 outs, there are only nine to go. People start counting down, counting pitches. After James Paxton had recorded 18 outs on Monday, Mike Zunino counted the pitches. He realized that Paxton had only thrown 59 of them. He could no longer be, as he put it, even remotely level-headed: “I knew that we’d be able to maybe have something special.”

When did we all realize that James Paxton was something special? Was it last year, when he went almost the whole first month of the season without giving up a run? Was it years before that, when he made his way back to affiliate baseball by way of the American Association after being kicked out of his college program for consulting with Scott Boras? Was it earlier this season, when he didn’t flee from the cruel talons of an eagle? His Wikipedia page notes that incident as garnering him “national attention,” so maybe that was it.

Or perhaps not at all. Not until tonight. Paxton’s skill has always come with the caveat of injury. The most innings he’s pitched in a season was 136 last year. And, of course, he’s on the Mariners. So much can go unnoticed when you’re out here in the northwest.

Here’s when I realized: I watched James Paxton give up two runs in the first inning to the Blue Jays last year. Josh Donaldson hit a homer that barely cleared the right-field wall. He rounded the bases triumphantly, and I wasn’t even looking at him. I was looking at Paxton, standing there on the mound. This was my one day a year when I saw my favorite team, and they had just taken an early lead, and I cared less about them than about the guy pitching for the other. I wanted him to watch him dominate, like I’d seen him do so much that season. I wanted to hear the cheering from the Maple Grove. And even though he lost the game, 4-0, I was just happy to be there, to watch Big Maple pitch.

The last nine outs of a possible no-hitter are terrifying because of the maybe. Because of all the things that could go wrong, because of how close you might come only to not get all the way. Maybe Kyle Seager won’t make that play. Maybe Dee Gordon won’t get a good read on that liner. The series of events leading to everything going right seems so narrow in comparison to all the other possibilities.

There was no maybe in the last out of Paxton’s no-hitter. His face was as calm as ever, but his pitches betrayed his appearance of normality. His three hardest pitches of the night came in that final strikeout of Donaldson: three fastballs, rising, that Donaldson seemed to stand no chance of catching up to. The Toronto fans knew it — they celebrated, too. Something undeniably special had happened. And something special has been happening for years, in every successive start that James Paxton made, every win and loss, every injury he returned from. Mariners fans have known all along; they were watching from the very first inning, when no one else was counting. But everyone knows, now. Everyone is paying attention. 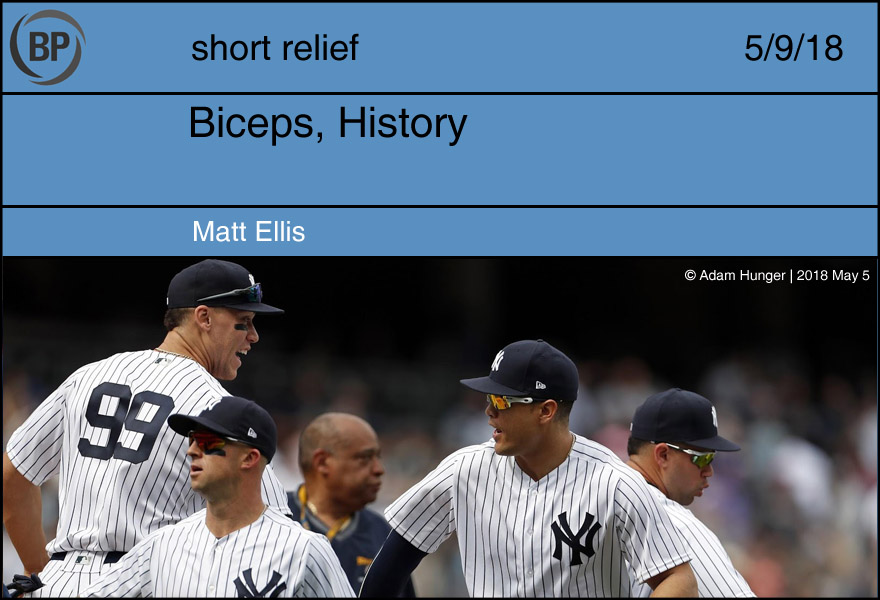 You can’t quite tell at first. The man is rounding third, or is it first onto second, reversed? It is difficult to tell.

It is one of the first films ever made in this country–the medium only three years old, and yet, this short telling us all we need to know about what it looked like that August. It’s 27 seconds long–how long a reel of film was at the time before it was regulated into a single standard. And yet I watch this and think about Manny Machado running, I think of Mike Zunino jogging, I think of Dee Gordon running.

And yet I also sit and wonder about what we will think about when we watch this stupid video where Giancarlo Stanton hits a home run with an exit velocity quantifiable only in emojis, and also the fact that *this* is the thing we will forget, not the first two videos:

(link to a video, which does not embed)

In 1989 Francis Fukuyama told us history was over. He was wrong, but in some weird way he was right. No longer will we ever be able to watch one of our heroes break history because history has already been broken, and now what we have is a minuscule, imperceptible, boring struggle to prove that Stanton isn’t striking out at record rates, that whatever man COOL IT HE’S STILL GOT IT IN THE TANK.

1. Who will break *a* record at this point and,
2. What records are left to be broken?
3. When a record is broken, will it cease to have ever been one?

It’s easy to laugh at the end of history, but it has to leave you wondering… precisely how wrong was it, exactly? There is a man rounding third and scoring in 1898, and we love to say that nothing has actually changed. Have we really come to terms with what it would mean to say that we still live in that moment? That nothing has changed, or can? That this Edison film tells us something that one hundred years of sports medicine can’t? I’ll take the under, if you ask me, but it leaves you wondering, wondering.

Also liked the Paxton comments. It's nice to read something about the sport written with compassion, (nearly foreign to, but hovering somewhere near the diamond,) and insight gained by thought.
Reply to red
frank noto
Bye Emma, and thank you for this. We hardly knew yee, but this was superb.
Reply to frank