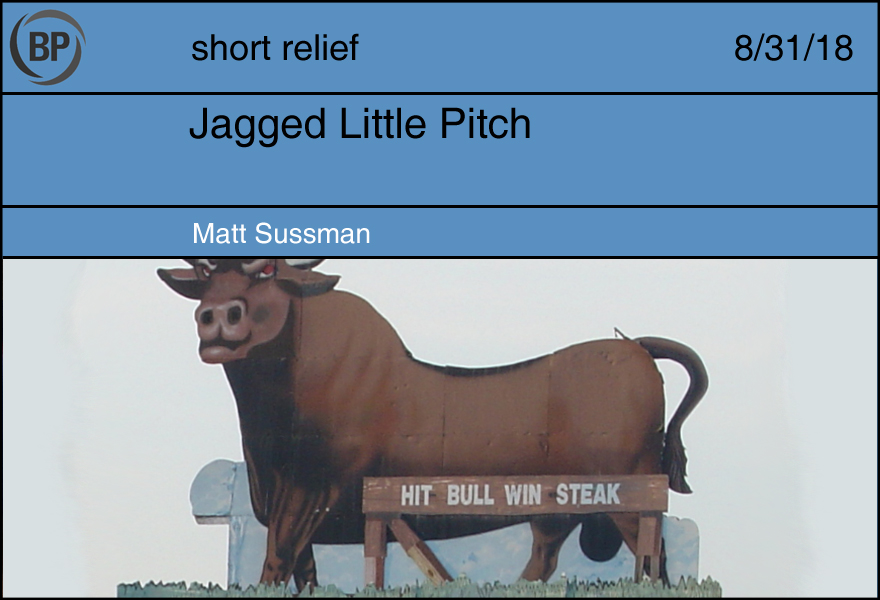 On August 26, Ruben Alaniz was called upon to finish the ninth inning for his Durham Bulls against the Norfolk Tides. It was a four-run lead, so it wasn’t a save situation, and therefore not too much pressure. His catcher, Andrew Moore, a major league veteran for parts of nine seasons, dug in to start the inning.

Alaniz’s story is one that you’ve probably heard before. He’s on his ninth season in the minors for his third organization. He’s 27, which seems young, but he’s been at this rat race since 19, so his adult years have been focused entirely on becoming a major league player. And he’s yet to pitch a full season in Triple-A.

It can really get one to thinking, standing on a dirt hill several feet away from another soul. Even though it’s a bad time to get lost in one’s thoughts (especially in a league with a pitch clock). Still, what is he doing wrong? He has mid-90s velocity. He is striking more and more batters out. He just can’t seem to get over the hump. Ruben has been over this speech several times in his head. Just one more year. I know I can make it. One call-up, one inning, and it will all be worth it.

He’s in the best situation to date, being a reliever in the Rays organization. They can’t get enough of them. They’re starting to get special names like “opener” and “second pitcher” and pretty soon they’ll all have special nicknames like Stratego pieces. But maybe he still has dues to pay, since he is but a converted reliever, as many are, when he couldn’t go deep into games in the Astros organization. Maybe it’s not his time yet.

Then again, Alaniz thinks to himself, baseball isn’t one big line where everybody gets a turn. It’s a free-for-all. Throw your pitches, make the outs, and take that September call-up. Turn it into a career. It’s all on you. Of course, that goes contrary to what Crash Davis said. This is, after all, the same team. Yeah, it was a fictional character. And what’s the opposite of a dying quail for a pitcher?

All of this was swirling around his head. Then the home plate umpire called out to him.

Alaniz retired the side in order. 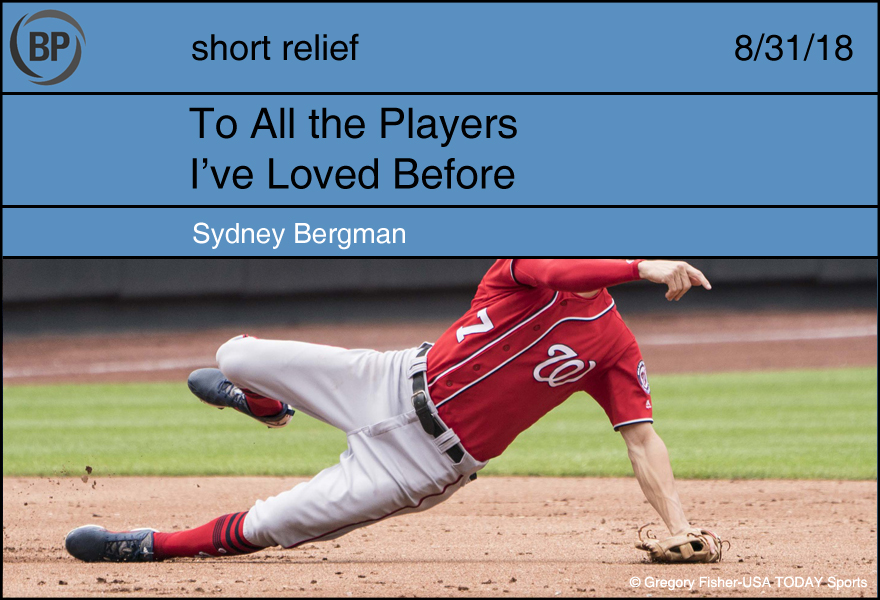 I balled up your shirsey, Trea Turner, the one I wore to PT every week, and shoved it in the back of my closet, along with the players’ weekend one in a youth large that read ‘Triple T’ on the back. I thought I was too old to be disappointed.

I’ve taught students who are now older than Turner, adults I still think of as ‘kids’ and who call me ‘Ms. Bergman’ in text messages. ‘Kids’ in their mid-20s now navigating life, some with children of their own. Who’re getting married and figuring out their careers. One has written and published a book.

I stopped working with kids two years ago, and miss it, miss the way that kids, even when they disappoint you, have an endless capacity to change and to grow. I miss knowing that whatever thing they’ve done – even, especially, if it makes you want to go, “Oh my god, why would anyone do that?”; when they lick a table or shoplift or say incredibly hurtful things to one another – they can move beyond it. That they’re about two-thirds from being fully formed humans, and I got to see that strange, fumbling process.

People have cited Turner’s – and Newcomb’s, and Hader’s – relative youth in excusing what they’ve said. The thing about kids is that they constantly look to adults to see how we’ll respond to their actions. If I say this word, will Ms. Bergman tell me to go stand in the hallway? Write me up? Laugh? I had a 9th grade student once call another kid a ‘redneck’ in class. I taught in a diverse school in an urban area. I’ve had to explain, in talking about the genetics of cow coat color, that there are different kinds of cows. ‘Redneck’ was a similarly exotic concept.

Usually, if a kid called another kid something, I kicked them out of class and let them stew in the hallway. In this instance, and in front of the class, I told this student not to call other people ‘rednecks.’ He apologized and that was the end of the interaction, though I found out that he’d written his college essay about it years later. One of a thousand interactions we had that year; something I almost immediately forgot, and something that he remembered.

No one’s born knowing how to apologize. Adults have to model what actual apology looks like for young people. There were things I messed up as a teacher, times I said or did something hurtful. My apologies weren’t only apologies – they were ways of saying that apologizing is, or at least should be, a necessary condition of adulthood. That everyone, no matter our age, should acknowledge when we’ve wronged someone else, apologize, and commit to better future action.

But this requires accountability and consequences as well. The players who’ve said harmful, racist, ableist, homophobic things have managed perhaps a half of an actual apology between them – coupled with almost no commitment to future action.

And none of their teams required anything beyond that, at least nothing that’s been made clear to fans or the public. There’s no impetus for Turner to learn or grow from this experience. I have no idea if the slurs he used are still part of his everyday language, or if he’s done his growing up already and we’re seeing the vestiges of bad thinking and bad action.

There’s no way to tell; nor does baseball generally or the Washington Nationals particularly, have any interest in telling us. It’s too bad – there’s a kid out there, a million kids, watching to see how adults respond. 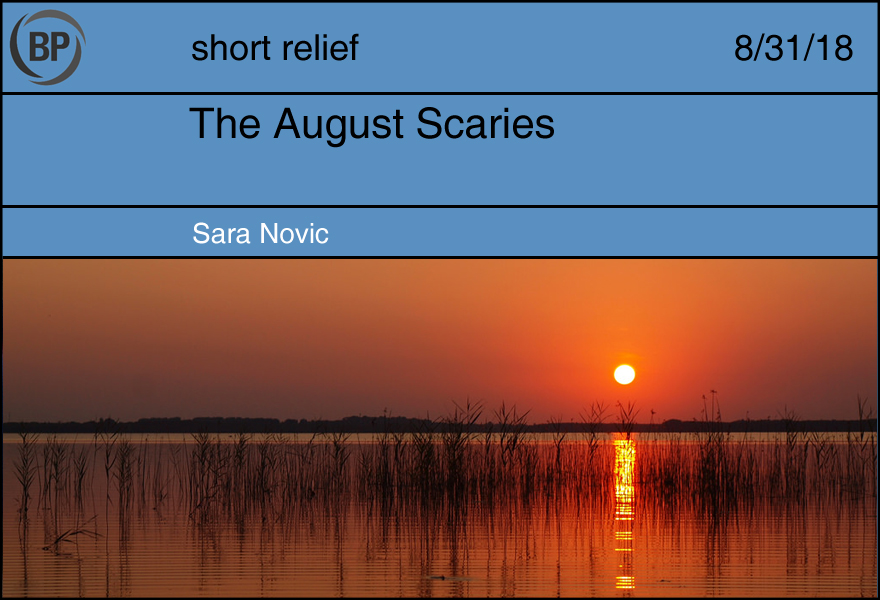 This week I ran across an anonymous internet quote that said, “August is like the Sunday of Summer.” Generally I have a very strict policy of hating, or when applicable, actively disagreeing with internet quote-memes, but this one resonated. Anonymous was right. Summer is on the wane, and just like a Sunday night, I’m feeling it: that creeping sadness with a dash of panic, the Sunday Scaries on a macro scale. My days, which, for the past two months have consisted of writing, research, and a blissfully-close-to-zero amount of human contact, will now be subsumed by the Semester. I like teaching. I enjoy my students; I like serving as an advisor; I don’t even mind grading papers, of which, since I’m a literature professor, there are many.

Do I hate tending to several hundred administrative emails a day? With the fire of a thousand suns. Do I wish that our U.S. education system wasn’t irrevocably broken by conflicting ideologies/a will to keep the masses illiterate/standardized testing/greed? More than I hate the Wilpons!

But overall, I know that I’m in the right line of work and couldn’t imagine doing anything else. What’s more, I know lots of people out there would kill to have the summers “off” **Lights 500 pages of lesson plans on fire and runs screaming into the abyss** So why are the August Scaries so completely soul-crushing?

I think it’s a return to the tethering of the clock. In the summer I have a schedule–every morning, the dog jumps on my head and I take him to the park; I get coffee; I write until my husband gets home, walk the dog again, go to the gym, cook dinner–but the schedule isn’t tied down to the minute hand. Things won’t fall apart if I let the the dog dally in the bushes a few minutes, or if I stop to talk to the barista. Like outs, innings, series, things still get done, but they finish in their own time.

The semester is more like basketball, clinging fiercely to the clock, a frantic attempt at evening up, in the end elbowing one another in the head just for a chance to stop the clock. It’s exhilarating in its way, but it’s unbeautiful. It’s not baseball.

The Mets season has functionally been over for some time now, but it wasn’t so long ago that we sad fans had our own taste of October baseball. That year, the August Scaries didn’t seem so bad–baseball was both a place of refuge and a source of excitement, a transition to propel me through those first uncertain weeks I envy that of this year’s winning teams and their fans.

All of which is to say, I wish you all the best as we tether ourselves to the clock, in work, in school, in sports, in these coming weeks. Thanks to the Short Relievers for letting me hang around here this summer. With any luck, I’ll see you next year.