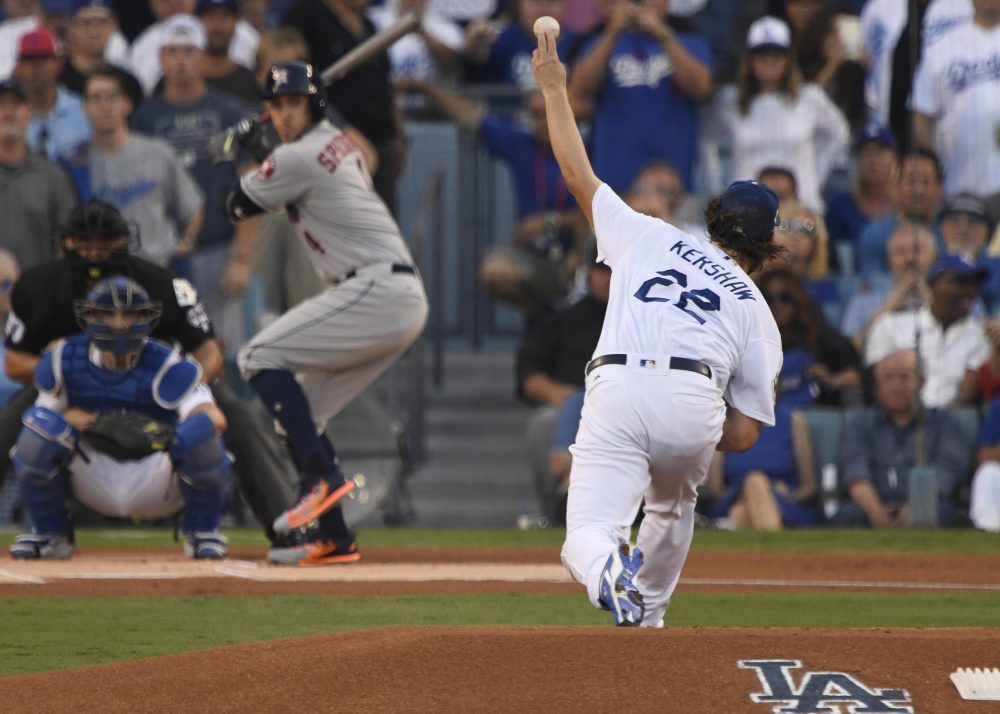 Deception comes in many forms. Traditionally baseball, and pitching more specifically, concerns itself with the most obvious iteration of the concept. (Yusmeiro Petit‘s “Invisiball” comes immediately to mind.) Pitchers are instructed to hide the ball, and refine their mechanics in order to not give hitters an edge. Earlier this season, there was one heck of a to-do when Jeff Passan of Yahoo Sports reported that Yu Darvish was inadvertently tipping his pitches. Darvish confirmed as much, and went about fixing the issue.

It is precisely this type of deception that the most popular application of Baseball Prospectus’ pitch tunnels data explores. For pitchers like Kyle Hendricks and Dallas Keuchel—and Greg Maddux before them—the name of the game is to make all of your pitches look the same. Force the hitter to guess, and leverage their inability to tell your pitches apart to your advantage. These small advantages—an extra 2% you might call them—add up to provide a significant advantage to the pitcher.

Deception, naturally, is deceivingly complex. Let’s all take a moment to look at the image below, pulled from a book those of you with children may be quite familiar with: 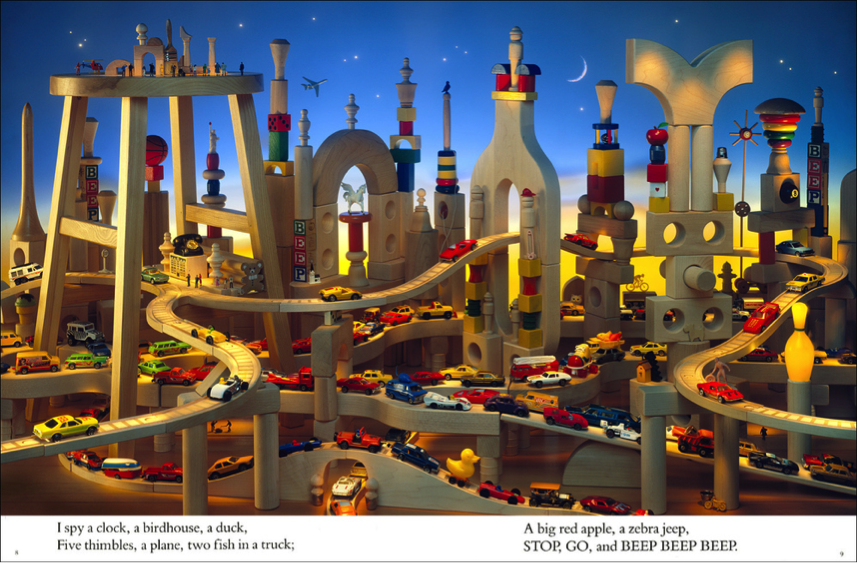 The scene depicted appears simple at first blush, but when you attempt to find the clock—the first item called out at the bottom of the page—that ruse of simplicity quickly fades. In reality, the scene is composed of a complex cast of pieces that make the simple task of identifying the clock much more difficult.

This is deception in its most traditional sense. For the purposes of this exploration, I’m not particularly interested in that. I am interested in seeing if you can find the golf tee in the image above, however.

The human brain is a funny thing. It likes patterns. I mean, it really likes them. Let’s do another experiment. Take a look at these two plots below:

Which of these, in your mind, is most random?

While you ponder this, let’s take a moment to think about randomness. You’ll often hear that a pitcher should keep hitters on their toes, or that they should avoid falling into patterns. The idea being that true randomness is important. Alas, pitchers are terriblly bad at pitching randomly. Why? Well, because detecting randomness is very, very hard.

Take for example, this quote from Steve Jobs on the shuffle feature on the original iPods: “We’re making it less random to make it feel more random.” Users were getting annoyed when three songs from the same artist would play in a row, even though that’s inherently more random than significantly different songs playing.

Back to our plots. Have you figured it out yet? If you chose the image on the right, well congratulations. You’re perfectly normal. You’re also perfectly wrong.

Randomness by its nature involves clumping, strands of things closely mashed together, and wide areas of open space. The image on the right shows a roughly uniform distribution of dots, one that is not random. This example comes from a book by Steven Pinker, and the image at the right is actually a map of glowworms hanging from the roof of a cave in New Zealand. The worms, competing for food, distribute themselves as far apart from their neighbors as they can–resulting in a relatively regular distribution of worms across the cave’s ceiling.

If this concept is fascinating to you, I’ll gladly point you to this tool where each refresh of the page produces two plots: one perfectly random and the other perfectly not. I could spend thousands of words expounding on this concept, but this is a baseball website. If you’re interested in more examples, including more detail on Pinker’s example, Wired has a lovely writeup in which you can indulge.

So we’ve established that humans like patterns and that we’re frankly pretty bad at detecting randomness. There’s another concept I want to introduce before we bring this all the way back to baseball. I recently sat through a presentation by Amy Herman, a truly remarkable woman who discussed the concept of visual intelligence. One aspect of Herman’s presentation brings us back to the idea of deception, but through the lens of the viewer. In her mind, our perceptions and expectations shape the way we see and interpret the world. Remember that golf tee from up above? Did you ever find it?

If you get a room full of people to look at a painting, each may take away a different aspect of said painting. Let’s do another experiment. Take a look at this photo below, taken in the Bronx. 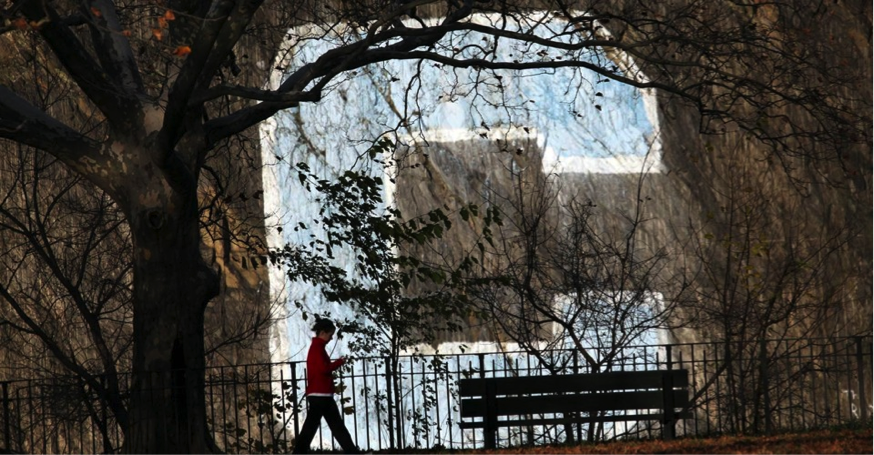 How might you describe this photograph to someone on the other end of the phone? There’s a woman walking, looking down at her phone or some such thing. There’s a bench and a fence. Some trees.

Would you believe that half of the people Herman asks to describe this photo omit the giant white “C” from their description? It’s so obviously there, and yet to half of us it is not.

Perception is a funny thing. What you perceive to be real and true and right may not be the same as the person sitting next to you.

I mentioned earlier that most often when we discuss deception through the lens of baseball, we’re using the traditional understanding of the term. Honestly, the vast majority of discussion about deception as it relates to anything is from this understanding.

Not today, folks. Let’s talk about the kind of deception that looks like a giant white “C” in the middle of a photograph. The kind that manifests itself as a two-foot-tall golf tee, standing in for a turret or some such architectural detail.

When Clayton Kershaw drops down to throw from a low-three-quarters arm slot, or Marcus Stroman quick pitches, or Johnny Cueto gives us that shimmy-shake that makes the bat boys and girls go wild, they are practicing deception. It’s not a kind of deception our brains can readily process. It’s a combo-breaker–the kind of thing that we observe and dismiss because frankly it doesn’t fit the neat little model of what we’re expecting in our brains.

Hitters know that Clayton Edward Kershaw sometimes throws a drop-down fastball. They know that Stroman is wont to quick pitch. They know that Cueto loves to embrace his inner Jason Derulo and gives us that wiggle.

They also know that more often than not, Kershaw is going to throw stupid good stuff out of his normal arm slot. They know that Stroman is going to come to the plate with a fairly normal tempo. They know that Cueto’s wiggle is reserved for special occasions. These oddities don’t fit the models in our heads, they don’t match our expectations. Our perception is that these things do happen, but surely they won’t happen to me.

There’s something visceral about the fight or flight reaction the human brain employs. It’s that big red button on the wall in chemistry lab in high school that threatens to shut down the supply of gas to every Bunsen burner in a 50-mile radius. When a pitch is headed straight for a batter’s head, there’s no time to decide if it’s a curveball or a fastball. There’s only time for getting the hell out of there. Sorry, Buster Posey.

That fight or flight reaction can override our brains and cause us to hesitate, or better yet strike into action away from the “threat.” Do you know why deer get “caught in the headlights” of cars on the road? It’s because their eyes are designed to see best in low light, and the bright flash of the headlights temporarily blinds them. Their brain shuts everything down–better to not move at all until their eyes can see what’s going on around them.

Alas, this is a poor strategy for deer, just as it is for major-league hitters. The efficacy of the strategy is irrelevant, of course, because the brain calls the shots when it comes to motor skills and its default position when overloaded with information that it can’t square away is caution.

That’s how you get a reaction like the one Reddick had in Game 1 of the World Series against Kershaw.

Let’s make something clear right away: Reddick, on an 0-2 count, was swinging. He was really just looking for something to make him not swing. Some piece of information that says, “Hey, that’s not a strike, don’t swing at that.” This generally holds true for almost every hitter not named Joey Votto in all non-3-0 counts. Hitters hit, and that’s what they are looking to do.

Reddick starts his swing against that pitch, but at some point, as his muscles start moving his bat toward the plate, something happens. Synapses fire as his brain processes the fact that Kershaw’s arm did things that it normally does not do. The ball was fired from a lower release point that Kershaw dropped down to because, as the Dodgers’ ace revealed after the game, “it seems like a good idea.”

The signal being fired from the brain tells Reddick’s muscles to abort. Something is amiss. I don’t know what that was, but it wasn’t a normal Kershaw pitch. It doesn’t fit the pattern or model in Reddick’s subconscious mind. He halts his swing, and watches the 94 mph fastball from Kershaw dart through the heart of the strike zone for a called strike three.

It’s no secret that Kershaw occasionally drops down and throws from that funky arm slot. It’s often not even a great pitch–as Morrison points out, opposing batters hit pretty well off of Kershaw’s side-slung offering during the regular season. In this moment, however, that was irrelevant. The low-three-quarters arm slot should’ve made it obvious what was coming. Instead, it was so glaringly different than what Reddick expected that he couldn’t decide what to do. Kershaw gave him arguably the easiest of his pitches to hit, when he had him at his most vulnerable. According to the data, it was a mistake. A poor choice by the ace who made so many right ones throughout the course of the game. In reality, it was anything but.

It’s easy to watch a baseball game and critique the pitch selection, sequencing, and approach of the pitchers. It’s easy to suggest that a professional baseball player should have been able to hit a 94 mph fastball—just slightly faster than league average—that was basically down the middle. It’s easy to forget that sometimes finding the golf tee is really freaking hard, even though it’s the single biggest object in the image. The art of deception is, it turns out, deceptively complex.