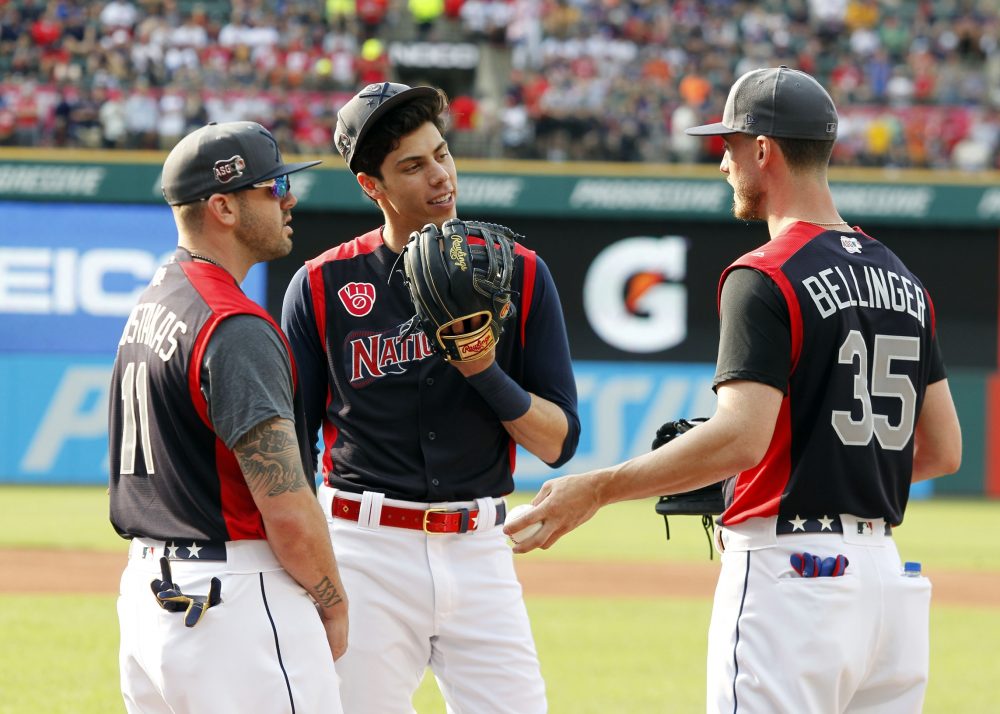 The National League’s high-flying MVP race began in earnest on April 21. The Dodgers and Brewers played a Sunday matinee in Milwaukee. Cody Bellinger‘s young season was turning heads and the reigning title-holder Christian Yelich was still scorching hot. Coming into that game, Yelich led the majors with 13 homers, Bellinger was tied for second with 10. Bellinger was batting .407, Yelich “just” .361.

These facts would, understandably, lead you to believe the race had already begun. The MLB.com account of the game — in which Bellinger robbed Yelich of a homer, then proceeded to hit the go-ahead blast in the 9th — says otherwise. See, the lead quote of the recap, from Joc Pederson, went “There’s not much Belly can’t do.” It lacked the Belli vs. Yeli marketing spin. Because this wasn’t the race. Until it was.

This is a trivial part of a legitimately interesting comparison between two outstanding seasons, but it underscores the flash-fried, time capsule nature of this annual practice. These races, especially when they pit two eye-popping talents against each other distill what we know — and what we value —right now into a set of vote totals and a trophy, a decree from a version of ourselves we’ll soon lose touch with. This, then, is an attempt to figure out how our ancestral baseball brains would have dissected the current NL MVP quandary.

The Third Troutian War, aka the 2015 AL MVP race, was the least aggressive of the bunch. Nonetheless, it gave Mike Trout‘s enduring excellence the challenge of another legitimately excellent but less expected season. In this case, that sprung from Josh Donaldson, and from a thrilling Toronto Blue Jays team that jumped up and won the AL East.

WARP would count it as another award Trout should have won — with a 9.6 to 7.3 advantage over Donaldson — though our measure at BP admittedly has the widest gap of any of the models. The coronations, correctly, cited Donaldson’s slight edge in win probability, but really they nodded toward the incontrovertible tug of the new and the intriguing.

That points us to Bellinger. His radical removal of strikeouts and willing transformation into an excellent outfielder — for a superior team, conveniently — make a compelling and easily grasped case for the challenger.

This Troutian War was far more vicious. The holistic, sabermetric measures of the day begged for the historic rookie to take the hardware over Miguel Cabrera‘s Triple Crown campaign. As Matthew Trueblood documented when DRC+ debuted here at BP, the assertion of Trout’s superiority may have been well-argued, but the certainty behind it was as flighty as the numbers cited. WARP now says Cabrera had the (microscopically) better season.

If anything, every grain of understanding is shifting faster now, sand disappearing under our feet every second. We regularly take stock of how the baseball itself is altering the shape of the game. We measure the exit velocity and launch angles of batted balls down to the tenths place. And every day we ascertain new meanings for the information we gather. This is, for many of us, a great joy of following the sport. It can also make all strident statements feel like preemptive fodder for Old Takes Exposed.

The 2019 fact in the NL MVP race that gives me the most pause is Bellinger’s astounding defensive rating. By BP’s FRAA metric, he ranks as the seventh-most valuable defender in the game. By Defensive Runs Saved, he ranks third (!!). I don’t dispute that he’s a terrific, athletic outfielder who has directly contributed 10 valuable outs via assists, and of course robbed a homer or two.

It’s the magnitude that gets me. If a 15-20 run defensive advantage over Yelich covertly proves decisive in WAR models, I’ll wonder whether that number will exist in 2029, or whether it will have been scrubbed and replaced by one altogether more confusing for the historians. For now, though, the accepted truth is accepted. Bellinger wins.

IN CASE YOU MISSED IT

BETWEEN THE LINES: CODY BELLINGER, TWO-SIDED GOLIATH, BY GINNY SEARLE

Cody Bellinger is dominating offensively and defensively like few other players in baseball history.

Not Ronald Acuña Jr., apparently. The 2011 NL MVP battle between Ryan Braun and Matt Kemp was a photo finish of homers and steals that didn’t hinge on homers and steals at all. Kemp, who finished second, had more of each.

Rare as these prolific power-speed threats are, they have lost the sheen of being holy. The run-scoring patterns of 2019 won’t help the young Braves’ superstar’s case, even if he joins the hyper-exclusive 40/40 club. Steals, as often pointed out by Joe Sheehan, are less and less connected to a team’s production as a greater percentage of runs are brought home by long balls.

This race of Dodgers and Brewers stars was won, it would appear, by the better team. Score another for Bellinger.

We have entered confusing territory. Jimmy Rollins‘ 2007 NL MVP victory is unhinged from the contemporary conventions of voting entirely, possibly because it preceded the first widely viewed WAR leaderboards by a year.

David Wright would appear to be the more likely contemporary choice, but his massive OBP edge went unnoticed in the face of … maybe just a fun fact? Rollins managed the majors’ only season with 30 doubles, 20 triples, 30 homers and 30 stolen bases.

Advantage: Yelich, whose pursuit of the first 50-homer, 30-steal season is the 2019’s most alluring and singular accomplishment.

Look, there’s nothing to say about the 2004 NL MVP race. The right player won. Let’s take a second to marvel at the astounding collection of talent that flourished simultaneously.

In order of the MVP voting:

Yeesh. By this standard, all the contenders are winners.

González’s eye-catching production did propel his 88-win team into the postseason. Come on down, Anthony Rendon. The Nationals third baseman, in a contract year, is the clearest talisman of a slow-starting team surging toward October contention. In the second half, he’s slashing .388/.464/.676. Importantly, he’s also closing in on Freddie Freeman for the major league RBI lead.

It’s not the best way to explain all he does for his team. It’s not the best way to isolate his contributions. It just might be the thing that gets someone to remember Rendon’s terrific 2019 — like 50/30 for Yelich, 40/40 for Acuña, or WARP for Bellinger. In this way, they are all worthy uses of ink, even if only one can produce a trophy.