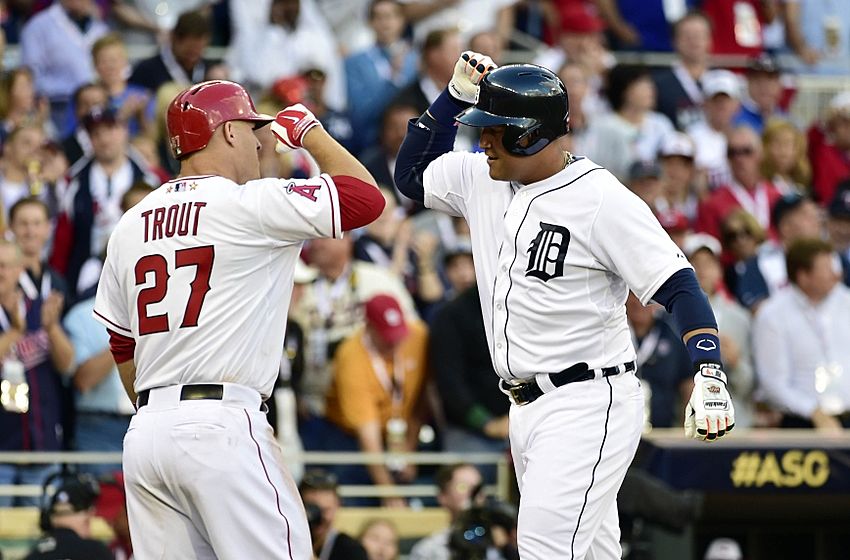 It was about as clear as these things get, and the writers got it wrong. In fact, they got it wrong twice. That was the consensus, in our sabermetric corner of the internet, when Miguel Cabrera stole consecutive MVP awards from Mike Trout in 2012 and 2013.

Cabrera was a lumbering first baseman, shoved across the diamond only because the Tigers decided to force-fit Prince Fielder onto their plodding roster. He was a great hitter, but he added no value beyond that hitting. Trout, at the tender ages of 20 and 21, lit up the field in ways Cabrera couldn’t. He robbed home runs in center field, stole bases both often and efficiently, was one of the most consistent hitters in baseball, and according to the best information we had at the time, he was also Cabrera’s equal (or very nearly so, or perhaps even his superior) at the plate.

Baseball-Reference and FanGraphs each had Trout about 3.0 WAR better than Cabrera in 2012, and about 1.5 WAR better than him in 2013. We had the gap slightly smaller in 2012, but slightly larger in 2013. When such a clear gap between the best player and the field exists, it’s rare that the award goes to the “wrong” one. In this case, though, more or less everyone with a stat-savvy bone in their body espoused the belief that it had happened.

We were, all of us, deceived.

Our new framework for measuring offensive value here at BP, called Deserved Runs Created, builds on the work our stats team has done with regard to catcher framing (first, years ago) and with regard to pitching (more recently, with the industry-leading Deserved Run Average). At its heart is the principle that existing stats—even ostensibly advanced ones—fail to properly assess player value, because they observe and summarize outcomes, rather than building in our broader understanding of the fact that baseball is a game of complex interactions and extraordinary variance.

Some of the difference in the estimates of the two players’ true expected offensive contributions lies in the smaller difference in park adjustments DRC+ uses. Rather than applying a blanket Park Factor (in 2012, Trout’s Batter Park Factor under our old model was 96, while Cabrera’s was 105, meaning that Trout got a significant advantage in calculating offensive value), DRC+ notes the ballpark and opposing pitcher in each plate appearance, which results in a much more textured, accurate (and often smaller) environmental adjustment.

Here are the two players’ raw statistics from 2012:

Whereas Batter Park Factor took those numbers (slightly favoring Cabrera, but only because of his slugging edge) and swung them toward Trout, DRC+ uses its granular assessment of the environment of each plate appearance, plus an advanced mathematical model that hones in on a player’s contribution to certain outcomes, rather than the outcome itself. Because that’s the way it works, the model also spits out deserved numbers in all of the above categories. Here are Trout and Cabrera’s deserved 2012 numbers:

Instead of being erased, Cabrera’s offensive edge over Trout should have widened as we adjusted our evaluations to fit the information we had beyond the outcomes of their trips to the plate. We just couldn’t see past what happened (and our fairly primitive efforts to contextualize those happenings) to what might have happened, and to what each batter’s real role in generating those results was.

The DRC+ model gives us run values (above or below average) for the contributions of each hitter to all the possible outcomes of a plate appearance. It tells us, for instance, that Cabrera’s ability to consistently avoid strikeouts was worth 10.0 runs in 2012, while Trout’s above-average strikeout rate meant his whiffs cost the Angels 4.0 runs. These are extraordinarily interesting data, because they give us insight into what the model thinks each player does well and poorly, at a very granular level.

They really tell the story of a player’s talent, though, when lumped into three categories:

These categories matter, because in them we see the three essential things a batter is trying to do at home plate: control the strike zone, hit the ball hard, and generate loft. Though by no means designed to do so, these could almost be considered surrogates for, say, contact rate, exit velocity, and launch angle, or for plate discipline, the hit tool, and the power tool, or for strikeout-to-walk ratio, BABIP, and isolated power. Whereas those are blunt instruments, though, these are scalpels. They tell us how much a hitter really does to get themselves on base, to avoid outs, and to drive the baseball, rather than just how often they manage to do those things.

Here are Trout and Cabrera in 2012, through the lens of these three categories:

Cabrera’s ability to draw walks at almost the same rate as Trout, without striking out nearly as often, certainly made a difference. Trout traded some of that contact for more consistent hard contact, which helped drive his stellar .383 BABIP, and between the relatively high percentage of plate appearances that ended in a walk or a strikeout and that real BABIP talent, he racked up the eighth-highest In-Play Out Runs total in MLB. Of the seven guys who were better in that category, only one had an NIP Runs total above average, and that was Dan Uggla, whose inability to hit for average drove his Hit Runs total well below average. What made Trout special that year was that he navigated that triangle of tradeoffs so well.

Cabrera had fewer tradeoffs to make. When he broke into the m ajors (as a wunderkind not dissimilar to Trout, except that even then, he was neither fast nor a valuable defender), Cabrera had been a slightly worse version of Trout: he had below-average NIP Runs totals in five of his first six seasons. By 2010, however, he was firmly above average in that regard, walking frequently (though not at an elite rate) and trimming his strikeout rate to under 15 percent. That’s when his supernal raw power allowed him to go to the next level.

This, then, isn’t just a history lesson, or a mea culpa for my own ardent insistence that Trout was robbed. It’s an example of the way DRC+ can change our understanding of players’ real (expected) contributions to their team. This model offers us a chance to stop being slave to actual results, without performing reductionist analysis where all players are treated as having the same degree of relative control over each aspect of their game. Miguel Cabrera was (probably) better than Mike Trout in the two years when he won the MVP and Trout didn’t.

From that single piece of information, one might be tempted to assume DRC+ necessarily favors Cabrera-style players—big, patient sluggers. It’s not so. To the contrary, because a principal underpinning of DRC+ is to shrink most players’ actual offensive contribution, any WARP model driven by DRC+ will slightly favor more dynamic players—guys whose value comes from defense, baserunning, and the position they play. Rather, the twin takeaways from the revelation that Cabrera was better than Trout in those seasons are these:

Trout has made all the same improvements Cabrera made throughout his early and mid-20s. In 2015, he was the leader in DRC-based WARP for the first (and still only) time, and in both 2017 and 2018, he led the AL in DRC+ itself. This past season, for the first time, he truly was the best hitter in baseball, with a 180 DRC+. We were correct, as far back as 2012, to observe that Trout was doing something historic. We were wrong about what that was. Trout didn’t break baseball, and he wouldn’t be an inner-circle Hall of Famer if the productive phase of his career ended with 2018. Still, he’s traced an arc from elite young hitter to elite hitter, period, and if he has a normal aging curve from here, he’ll easily attain that all-time great status we’d already assigned to him under all the old offensive value frameworks.

You need to be logged in to comment. Login or Subscribe
Barry Gilpin
Is it possible that FRAA is a bit low for 2012 on Trout though? It seems to be a bit of an outlier, and since we don’t really know BP’s methodology because we can’t see under the hood like you guys can, I don’t have all the info I need to agree or disagree with this take. But it’s surely interesting, Matt.
Reply to Barry
Matthew Gold
Thanks, fellow Matt. But perhaps you can explain this. I've been reading for years that while strikeouts are important to a pitcher's stat line, in evaluating hitters a strikeout is pretty much the same as another out. But here you are saying that Cabrera should get credit for striking out less. Is that inconsistent? Or is it that Cabrera's outs were especially productive?
Reply to Matthew
Jeff Wiser
Matt, I appreciate your writing here so much. It's jarring at times, and I mean that in a good way. Very well done.
Reply to Jeff
Greg Simons
"We just couldn’t see past what happened...to what might have happened."

So we're supposed to evaluate players not by what they did, but by what their performance likely would have been had the season been played out a thousand/million times? I can't wrap my mind around this concept.

I can see the benefit of using DRC+ to remove the "luck" from a player's past performance to estimate future performance. But evaluating a player's historic record based on what he might have done as opposed to what he actually did seems nonsensical.
Reply to Greg