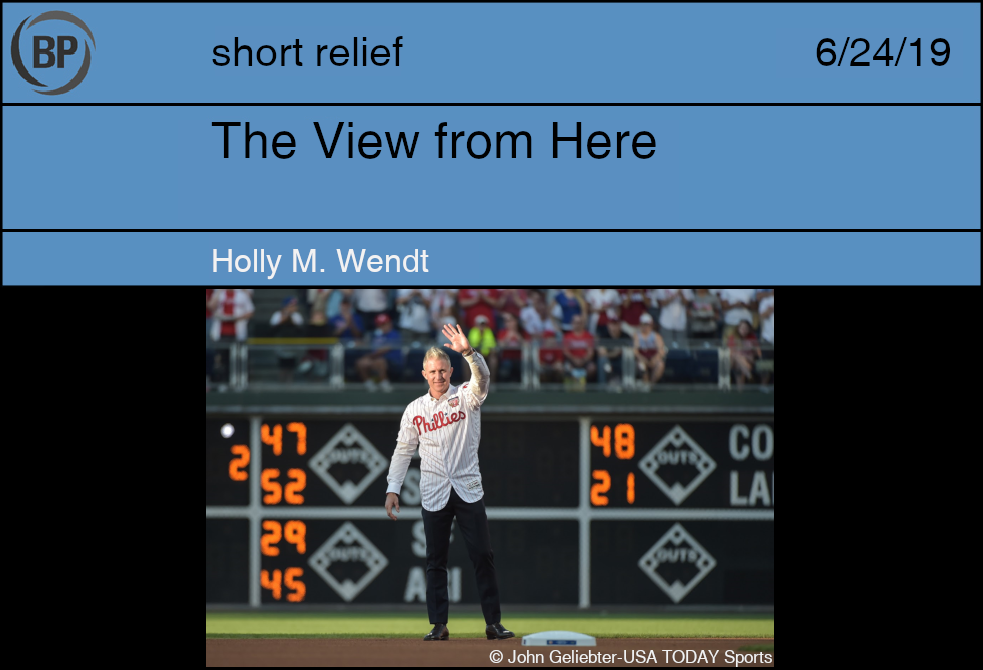 From the first-base side of the 400 level of Citizens Bank Park, everything falls into view: the green-on-green tartan of the grass, the crisp edges of the infield dirt and foul lines, the whole arc of the outfield wall and the bushes and the tall, glittering screen and all its flecks of aligning light. Television cameras show everything closer, but they seldom show it all at once like this. The perspective isn’t perfect—the top of the Phillies dugout is hidden by the front of the terrace, a bit of foul territory, a bit of the bullpens—but it feels that way.

And from here, the silver-haired man walking out to the podium positioned between the mound and home looks small because everything looks small. He looks small, but as the roar rises, it’s clear that his memory looms large, and how shouldn’t it? Chase Utley was perhaps the most beloved member of the 2008 Philadelphia Phillies, mostly for those contrarian Philadelphia reasons that made the rest of the league loathe him so. And, of course, because the wiry, taciturn Chase let loose one of the most famous expletives in Phillies history.

When, on Friday night, he steps up to the microphone to say a few words on this night to commemorate the retirement he made official last fall, Utley makes a joke about that moment—are the Phillies really sure they should put him in this position again?—but his speech is decorously bland and comprised almost entirely of thanks. It should be boring but it isn’t, at least not in the moment, forty-four thousand people clamoring in appreciation of an old, shared dream and its realization.

Aside from being really glad Chase Utley played for the Phillies and not against them, aside from an appreciation for a guy who was just really good at his job, I never felt any particular fondness for or fannish affinity with Chase Utley. He was a player who seemed always and ever to have a staggeringly sure grip on the game—not always successful because no one in baseball is, but always ready, always with a seemingly perfect awareness and the knowing calm to make the most of it. The fake to first and then throw to home to thwart Bartlett in Game 5 in 2008 is just one example of it, one that factored heavily in the between-innings highlight reels.

That confidence and surety and intense unflappability that is the thing that I associate most with Chase Utley? I, as the kids say, can’t relate, and never really could.

But while he speaks, while the highlights churn, that thick, sentimental feeling rises in my sinuses all the same. I cry a little, in honor of that old, shared dream: a World Series, now more than ten years past. It’s distant—the happening and the view both—but not at all distanced. Memory flares as unrelentingly as the sun hanging over the stadium roof. The sun will linger there, a brightness in the distance, longer tonight than it will again this season. 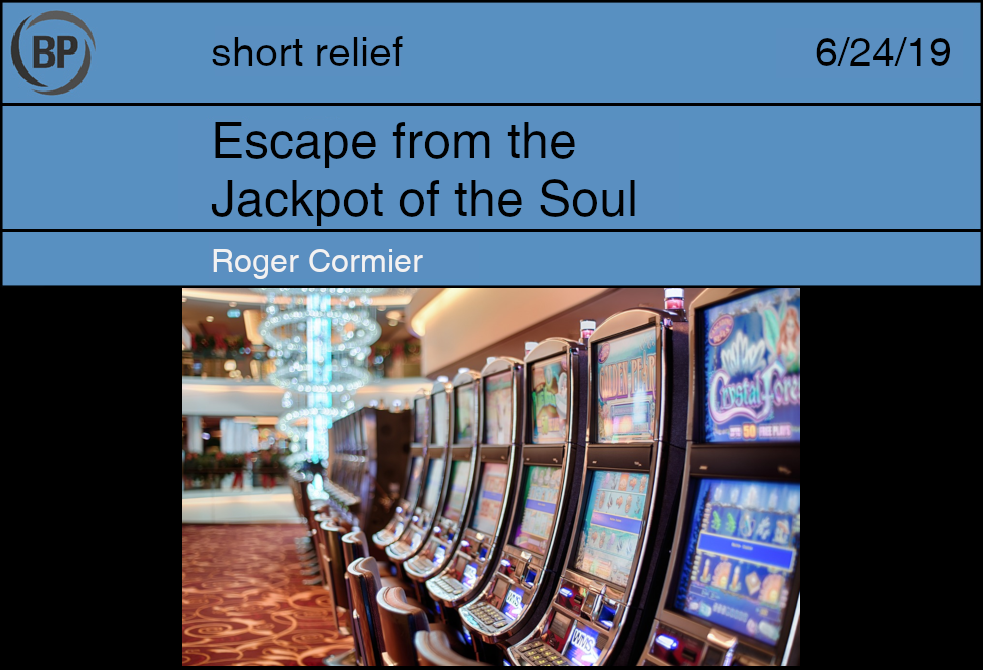 I uh, yeah, sure, it is definitely an honor to be invited this evening to talk about the deceased. I did not know Chase Utley, per se. I did not have to meet him personally to know what he was about.

Why are you all looking at me like that?

What’s that? Really? Let’s see what Google has to say…oh. I see.

Ahem. I apologize. I got confused because Chase Utley is dead to me.

Oh please, you call that booing?

I’m just going to go ahead and power through here with my eulogy. I spent five minutes on it I will never get back so…yeah, the deceased, we all knew what he was about. Propagating a culture of violence in what is supposed to be a beautiful game. Anger, greed, lust, fear, and Chase Utley are all the same word, all creating more karma in our universe to keep us in the game, on the wheel of birth and death, keeping us oblivious to this fate we made for ourselves.

But the joke was on Chase. Five days after breaking Ruben Tejada’s leg on a play made illegal as soon as logistically possible, Utley pinch hit in the win-or-go-on-home-and-sulk-all-winter Game 5 of the NLDS, bottom of the ninth, down one run. Jeurys Familia served up a 96 mph split-finger fastball right in the batter’s happy place. Utley crushed it. The ball absolutely should have been a home run. That is not what happened. Jim?

So no, I will say Noah Syndergaard did not have to serve up some vigilante justice by throwing behind Utley the next time the two teams met. For his trouble he got tossed, then injury-to-insult was informed he was in some sort of invisible ‘jackpot’. It took Young Noah time to learn to leave it to baseball to humble agents of malice. He was still loved for meeting the Royals “60 feet 6 inches away” the World Series prior, even though he gave up a run in that now famous first inning when he threw over Alcides Escobar’s head. But after Jesse Winker trolled Met fans earlier this season in a series with his bat and his annoying, dare I say disingenuous, waving to the crowds, Syndergaard didn’t plunk him or throw behind him. He threw a complete game shutout and hit a home run to win the getaway day game 1-0 all by himself. Winker struck out three times. He was ejected for arguing balls and strikes during the third strikeout, so Winker had to deal with the indignity of someone else finishing his at-bat for him and then getting credited with striking out all by himself. Good baseballing is the sweetest revenge.

Has his old, old, so very old age mellowed him out? Nope. Utley recently smugly verified he still hates the Mets.

Well Chase, I FORGIVE YOU. Yeah that’s right. I REFUSE to hate you. It’s what you want. I break your wheels, sir. I refuse to play your game. Sorry I’m not sorry, Buttley.

After playing a recording of a stadium cheering into the microphone as the Citizens Bank Park crowd did the exact opposite, Roger Cormier left the stage. Surveillance footage later placed him in a never-before-seen jail cell deep in the bowels of the stadium. As the Phillie Phanatic beat him senseless, Mr. Cormier pathetically screamed “Please, not the merchandise,” at which point the smartly dressed Mr. Utley laughed even harder than he had been the previous thirty minutes and sneered, “I don’t see no merchandise of value.” 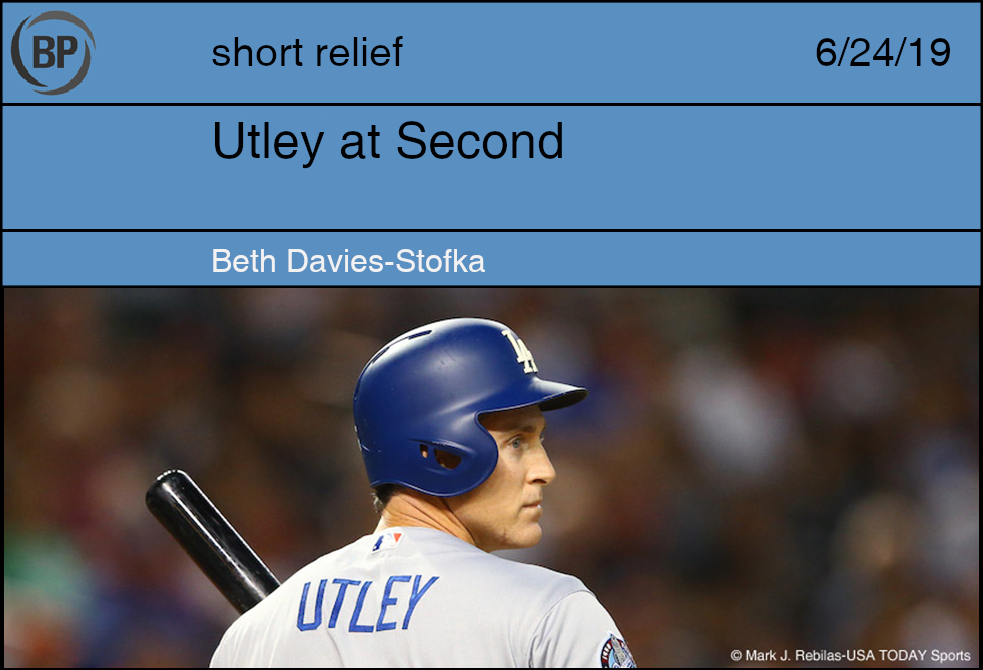 The few treasures I’ve collected over my years of fandom includes a small file of baseball-related clippings from The Wall Street Journal. Last week, I opened that file to find that I have more clippings of Utley than any other player. I hadn’t noticed before, but leafing them, it seems as though Utley’s career paralleled developments in fielding metrics.

In a 2009 blog post, the Journal discussed John Dewan’s Plus/Minus fielding system and FanGraphs’ UZR, both recently rolled out. By these models, Utley had saved 63 runs in the previous three seasons, more than any other second baseman. Quaintly, the Journal captioned a photo of Utley with, “Phillies second baseman Chase Utley is, by one newfangled stat, the best at his position over the last three seasons.”

During the 2009 World Series, the Journal asked, “Best Second Baseman Ever? Utley Makes a Case.” Why not? Utley was a statistical leader with both bat and glove, the article explained, not only a great hitter but the best second baseman in the game, when considering range factor and UZR combined.

By 2015, Utley’s body was worn and tearing, and he was traded to the Dodgers. Meanwhile, the Journal noted the fading relevance of existing defensive metrics (while still, oddly, calling them “newfangled”). Regular use of the shift was calling all the old models into question, and the best example, according to a July 21 article, was Chase Utley:

“There was a time a number of years ago where the original thinking was that Chase Utley was a remarkable second baseman,” said Vince Gennaro, president of the Society for American Baseball Research. “We only learned later that he was much better positioned in that hole between first and second against left-handed hitters.”

The shift implicates a whole new set of contextual effects, yes, but does that mean Utley was not a remarkable second baseman? Positioning was the key to his success. It was The Wall Street Journal that clued me into this in the first place. That same 2009 blog post that discussed the [newfangled] Plus/Minus fielding system also linked to John Dewan’s Hardball Times essay on the subject. What made Chase Utley so good? Positioning. As Dewan explained, when lefties came up, Utley positioned himself near the first-base line. That way, he was where he needed to be in order to field the hits that lefties pulled down the line.

Utley’s legacy will likely be the “Chase Utley Rule,” and that’s fair. The rule’s a good one. However, in a file of clippings, I have a record of a player who was ingenious, exciting, tough as nails, and irreplaceable. I’m glad I was there to see it.