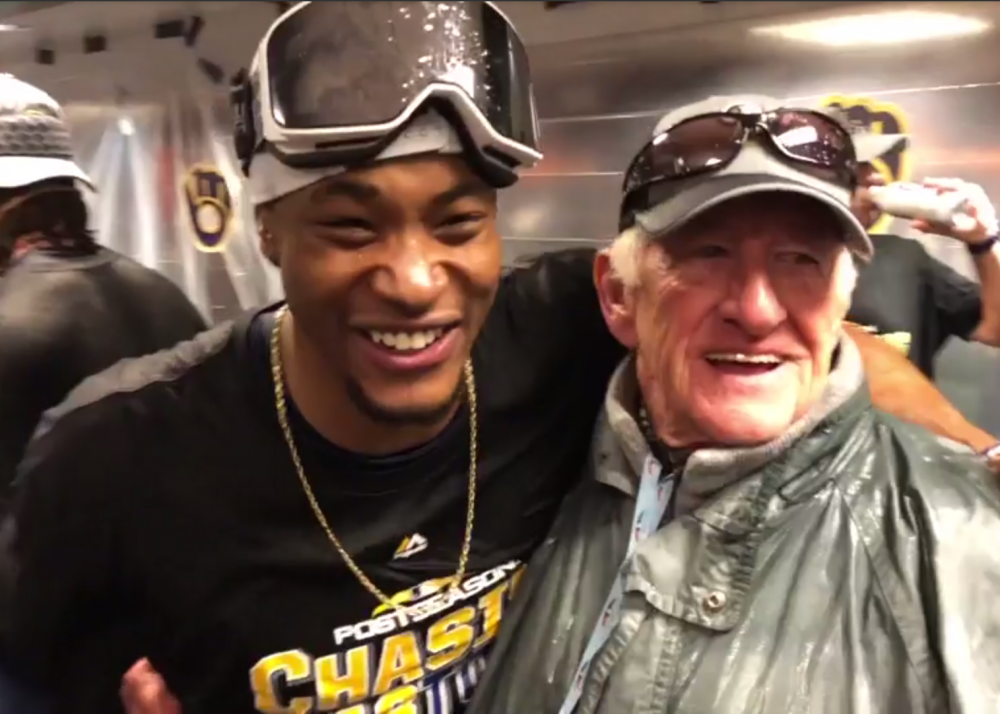 I know my line, but I need a minute.

Okay. How did I get here? I’m sure you think you know. But it’s worse than that.

“Rocktober” was created by Jimmy Page in 1969, then commercialized by radio station managers in 1971. Listeners were told to get the Led out. It was okay to take the Led out, because the alloy of rock and roll would still be strong, stubborn, solid. Like a rock (obviously). Its very obstinance made it a constant, the unofficial annual beginning of the holiday season. You rocked out all Rocktober at work and at home, in perfect spirits to coast the next three weeks before Thanksgiving, and then you were just an Eddie Van Halen solo away from the relentlessly festive December. You resolved on New Year’s Eve that you were going to keep the Rocktober spirit alive within you and without you, be one with Rocktober, all next year long. You failed, but you were forgiven, soon after the beginning of Autumn.

Then radio was dethroned as king. People joke about the radio now, yet local radio broadcasts on MLB.tv apps are the lone alternatives to the national television broadcasters who announce baseball for a living yet get facts wrong and seem to hate baseball now. In that way, baseball has kept the spirit of Rocktober alive on the radio, and that’s cool I guess.

But in 2007, the Rockies all by themselves saved the phrase and gave it added dimension, making Rocktober more powerful than ever. The Rockies won 12 of their last 13 games to finish the regular season in a tie with the Padres. They won the tiebreaker in 13 innings, all without touching home plate in the end. They then won their first seven playoff games. It was insane. They were truly an obdurate entity which could not lose (pretty much). They could not be stopped (basically). It was an ineffable achievement. The teams they faced needn’t had bothered. It was like willfully getting sucked into a hurricane, or, fittingly enough, in the middle of a brawl at a Scorpion concert. Coors Field became Coors. Coors: a goddamn crucible. No way out. Only the Rockies knew how to get out, but they ain’t rushing to get out.

On Sunday, the Rockies walked right into a hurricane. They finished their season not scoring in 27 of their 28 innings of October playoff baseball. The Brewers were playing on a different level. In a different month. They won their 11th consecutive game yesterday. They were playing, and will continue to play, in Rocktober.

German Marquez gave up a run in the first inning, but so what? He gave up the first run in his starts more than anyone in the game in 2018, and he still made 12 straight quality starts and broke the Rockies’ franchise record for most strikeouts in a season. Besides, we trolled Mike Moustakas good. 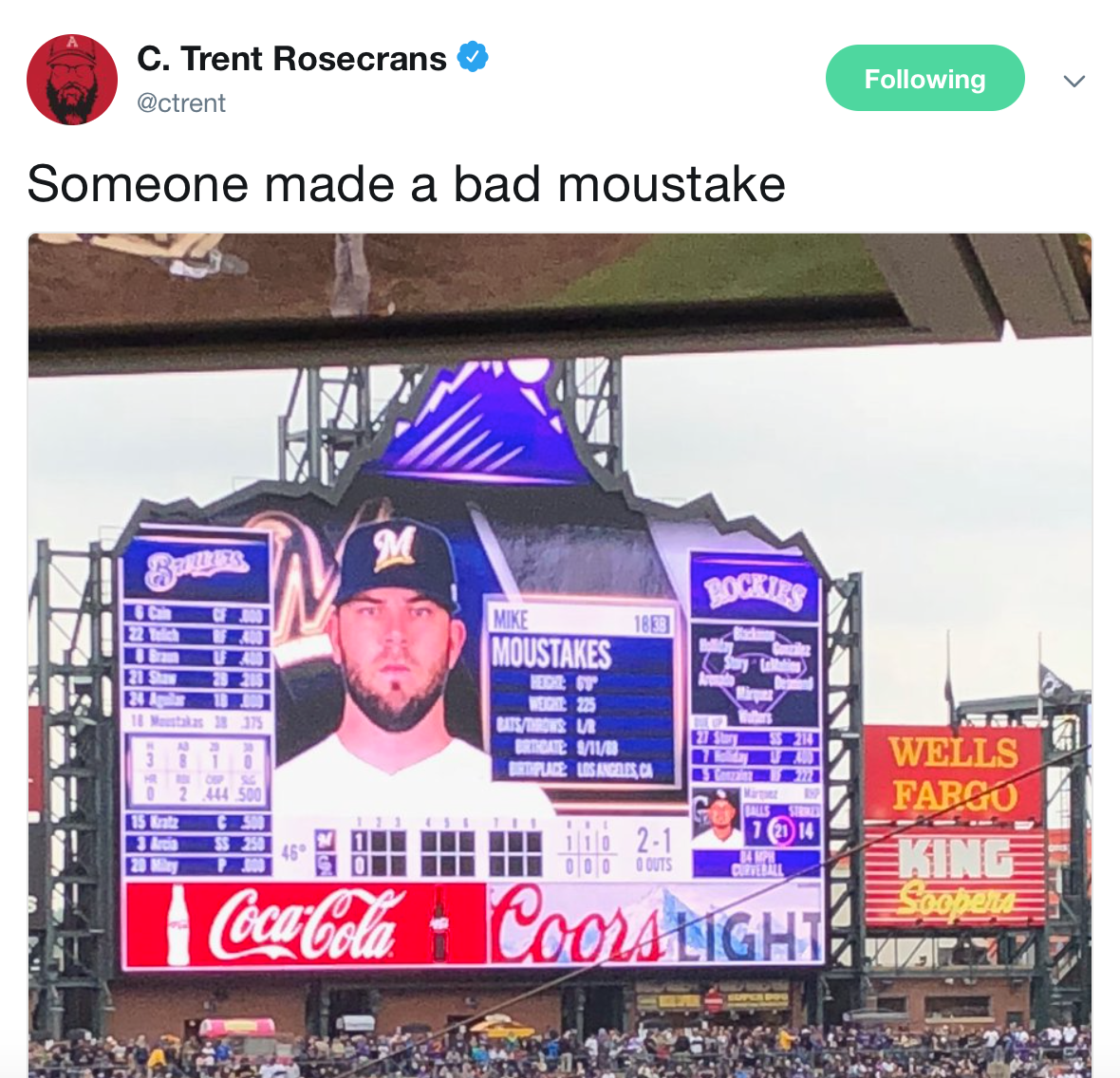 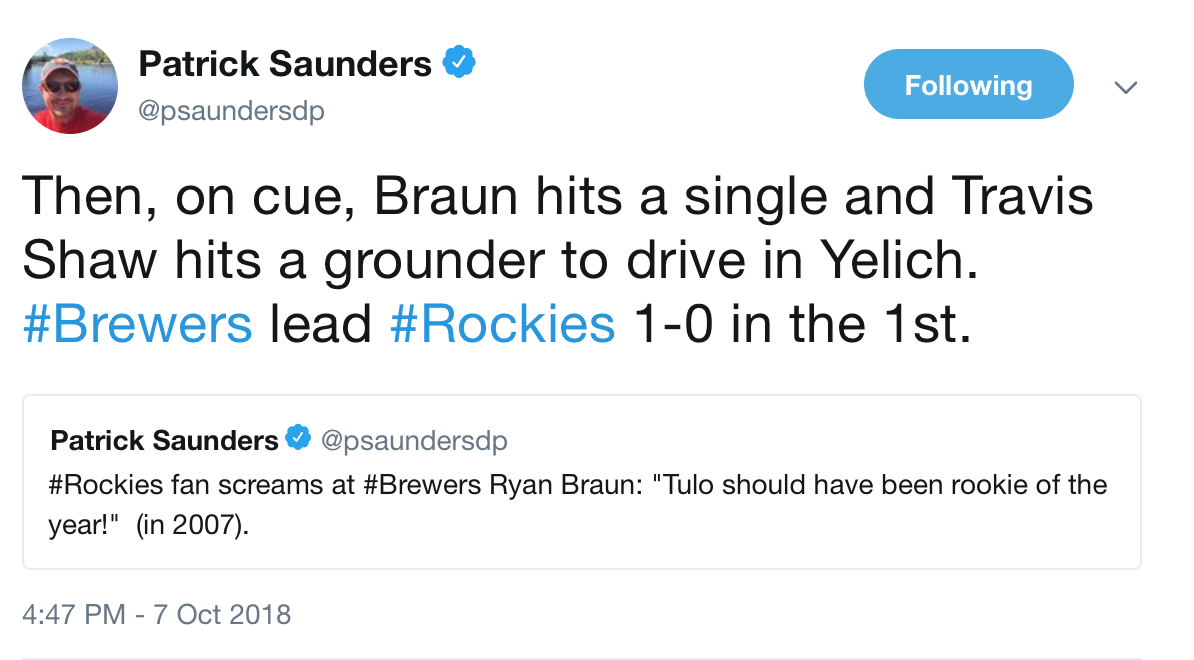 Things started to get strange in the bottom of the third inning. It was still 1-0 then, and with one out Charlie Blackmon walked up to The Outfield’s “Your Love.” We sang the “toniiiiight” that always gets cut off, because we got each other’s back. Coors was Coors-ing. Rocktober was Rocktober-ing. Then Blackmon hit a ball with a 103.9 mph exit velocity and a 10 degree launch angle. Therefore, Statcast said, 88 percent of the time that baseball is a hit. Aside from the two garbage-time, unnecessary, just plain mean solo home runs in the ninth inning, Blackmon’s batted ball had the highest hit probability out of any batted ball throughout the entire game.

But it wasn’t a hit.

DJ LeMahieu doubled to left after that. Blackmon might have scored to tie the game had he been on base. Nolan Arenado‘s ground ball to shortstop with one out instead of two outs would have certainly given him a chance to score then. One run could have begotten more runs. Any runs. But Wade Miley got through two turns through Colorado’s lineup with little incident instead. Brewers starters, the team’s supposed Achilles’ heel, allowed zero runs in 12 2/3 innings in the series. The Rockies scoring a run it turned out would be equivalent to getting blood out of a stone.

Jesus Aguilar homered in the top of the fourth inning. It actually tied Blackmon’s batted ball for the highest hit probability in the game for the first eight innings (the only one which tied it, I promise). Aguilar acted like it was a 100 percent certainty.

He shouted a bad word right at Wild Card game hero Tony Wolters as he stomped on home plate. Wolters responded with a single the next half inning, then getting forced out at second base almost immediately.

The Brewers almost broke the game open, but according to Jim Kaat, the Rockies caught a “big break” when Braun got hit by Travis Shaw‘s two-out rope, ending the inning anticlimactically. Of course, Jim Kaat also referred to Jesus Aguilar as “Jesus Aguilera.”

There’s always one goat when Rocktober hits. Not “GOAT”; “goat.” The tradition of using goat as the term for the Big Public Failure carries on from the initial “Rocktober.” It’s cruel, but them’s the rules. There has to be one spiritually crushed face, symbolizing the victims of the destruction of Rocktober.

Scott Oberg was the first Rockie out of the bullpen. The game was still a game. There were two outs, runners on second and third, and pinch-hitter Curtis Granderson at the plate. The score in the top of the sixth inning was still 2-0 in favor of Milwaukee. Granderson‘s at-bat ended with him striking out. When he swung and missed at the third strike, the scoreboard read Brewers 4, Rockies 0. The scoreboard was not displaying Mike Moustakas‘ name this time around. The scoreboard was accurate.

How? Oberg was messing around like he had messed around a million times before in his life. He had the baseball in his glove. He lifted the glove toward his right hand while releasing the baseball. Travis Shaw did the exact same thing after catching Charlie Blackmon‘s loud out. Oberg had caught the baseball with his bare hand when he did this the previous 999,999 times. But not this time. Not when he was on the rubber. That’s a balk.

And this, technically speaking, was a wild pitch.

This is a defeated man. 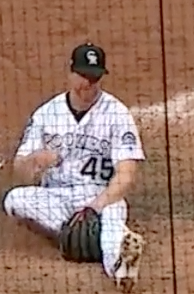 And this is an Erik Kratz.

The 38-year-old ran as fast as he could to score on the wild pitch, and he would be the first to admit that isn’t very fast. When Kratz caught the second game of this series, he became the oldest player to make his postseason debut since 1905. Kratz claimed that the ancient playoff newbie from 1905, Lave Cross, was someone he played rookie ball with. Back in June he got into an argument with Joey Votto that cleared both teams’ benches. “Completely blown out of proportion, that’s all,” Kratz claimed after the game. “We were discussing the Canadian dollar and flawed systems in our two governments. He was coming from a different side of it, and we were just discussing those kinds of things.”

Kratz said before Sunday’s game he would “call it quits” instead of “retire” when the time comes to hang up his cleats, because you can’t “retire” when you had a nondescript career like he has.

MLB Network’s Jon Morosi asked Kratz what he believed his hometown buddies in Telford, Pennsylvania would say looking at his mug in the local newspaper after his playoff heroics. Kratz figured they would wonder what that “nasty” hair on his face was about, followed by remembering how fat he looked on television.

He is a bit of a comedian, is what I’m trying to say. He recorded five hits in this three-game NLDS, and he didn’t play at all in Game 1. He had five hits for all of 2015. He had two in all of 2017. The game has humbled him. He is easy to like, and you are going to hear and read a lot about him over the next week.

But Erik Kratz is not rock and roll. He first caught for his varsity high school baseball team because the initial starting catcher got caught smoking a cigarette. Now that is rock and roll. Of course, smoking a cigarette of the non-electronic variety is not cool anymore. And that is for the best. Times change. Rocktobers don’t last forever. At least, not for the Rockies.